Theatre review: Clybourne Park – the lighter side of history, race and property 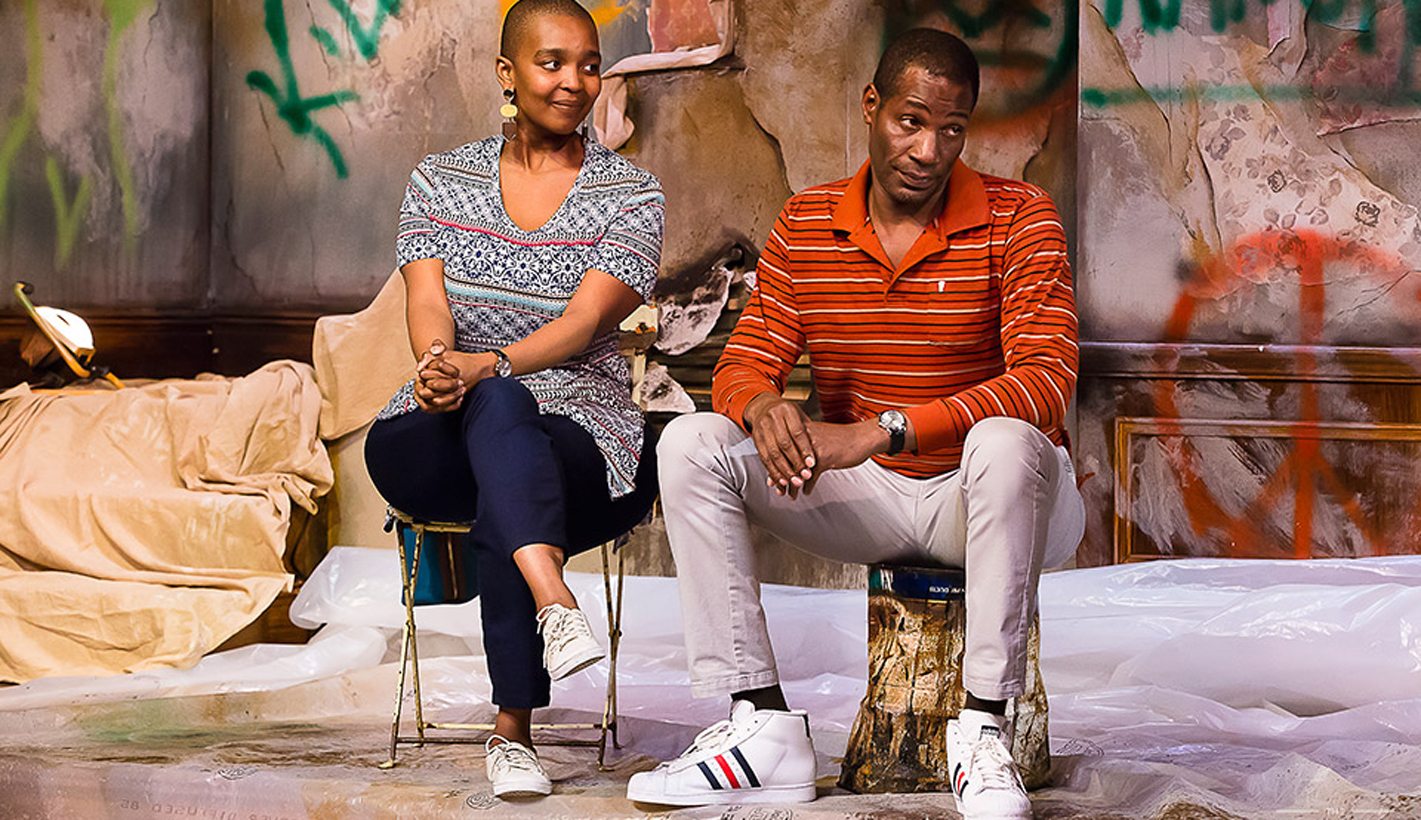 American playwright Bruce Norris’ Pulitzer and Olivier-award winning play is a deceptively simple comedy in which middle-class manners and restraint slowly stew and boil in a universal sauce of land, race, history and dispossession. This superb local cast beautifully makes visible that which hides behind the playwright’s eloquent writing. By MARIANNE THAMM.

If there is one criticism of Bruce Norris’ bristling text it is that Act II – set in 2009 in the Chicago neighbourhood of Clybourne Park about to be “gentrified” – is saturated with an almost insufferable brand of whiteplaining. The play, written in 2011, is of course set in the United States where black Americans are a minority tasked and burdened with challenging deeply-entrenched monolithic white hegemonic dominance and ignorance (why else Trump?).

Transport the action to South Africa right here, right now (and let’s say, for example, the Bo-Kaap in Cape Town) and the play’s two black characters Lena (Lesoko Seabe) and Kevin (Pope Jerrod) would be less likely to tolerate the self-indulgent babbling of the five white characters. Of course, Norris has deliberately sketched these characters this way and it is exactly this that drives the unseen currents and neuroses that sweep the action along. But we in South Africa have become so accustomed to fireworks when it comes to racial confrontation that the slow burn feels unfamiliar.

It takes some patience going along with Norris’ pace without wishing someone would kosh whoever is blathering on over the head. In that sense then, the writer succeeds in provoking the white middle class, which is the aim of it all. This is a play, after all, about hypocrisy, manners, stupidity, privilege and history.

Btw, Clybourne Park it is a comedy and a thoroughly enjoyable one.

Be that as it may, Norris’ drama is expertly constructed – so much so that it all appears deceptively effortless. The piece begins in the 1950s where Russ (Andrew Buckland) and Bev (Susan Danford) are packing up and moving out of their home in the white neighbourhood.

Here the play quietly folds back and builds on American dramatic history and tradition and Lorraine Hansberry’s 1957 civil rights drama, A Raisin in the Sun, about a black family, the Youngers, who live in Woodlawn on the South Side of Chicago. The payout from an insurance policy after the death of their father provides the Youngers with an opportunity to move on up. The family matriarch puts down a deposit on a new house in white Clybourne Park. And so it is that the Youngers, although they remain unnamed, make an entrance in Norris’ play.

The spectre of the absent father in Hansberry’s play is replicated in the first act of Norris’ where Russ and Bev circumnavigate the pain and loss of their dead son, a Korean War veteran, who has committed suicide in the attic of the house.

Keeping the wound at bay, they banter hilarious inanities; the origin of Neapolitan ice-cream, the capital of Mongolia (you have to watch Buckland “perform” Ulaanbaatar). All the while the black “help”, the maid Francine (Lesoko Seabe), pads and shuffles like an unseen but totally expected shadow between Bev, Russ and their boxed possessions. Seabe beautifully holds moving through a physical space, seen but unseen, heard but unheard.

Bev and Russ’ son too is present in his absence, particularly embodied in a trunk of memories still upstairs that needs carrying down. Here Norris brings comic relief as Albert (Pope Jerrod), Francine’s husband, arrives and offers to help. As Act 1 tapers off, the trunk becomes the fulcrum for moments of slapstick and farce between the tragedy.

Bev is a gormless ‘50s housewife, unaware, condescending (she offers Francine a silver-plated dish which she expects her to be excited about) anaesthetised, herself oppressed and blind to the reality that surrounds her. Gus bristles at it all, weighted with grief and irritation. A man of a certain generation and age who bears his suffering privately, who just wishes it would all just go away. To escape the noise he flees often to the basement.

Penetrating this private space is the insufferable pastor Jim (Scott Sparrow) as well as Karl (Nicholas Pauling) and Betsy (Claire-Louise Worby) his pregnant, deaf wife. Karl, a Rotarian, has learnt that Gus and Bev have sold their house to a black family and arrive to voice their objections. Karl is certain that this marks the beginning of the end for the neighbourhood. Karl appears also in Hansberry’s play as the character Karl Lindner, who in A Raisin in the Sun attempts to buy out the family. In Clybourne Park he reveals that he is attempting to thwart the sale.

While the dialogue in Act 1 is restrained, strained and at times covert, it is the minuscule physical occupation of the characters by the cast that reveals that which lies beneath, making visible the unsayable. Here director Greg Karvellas has beautifully mined the play’s (as well as the actors’) insides and it is an alchemy that is utterly beguiling.

In Act Two a white couple, Steve (Nicholas Pauling) and Lindsey (Claire-Louise Worby), are meeting with Lena (Lesoko Seabe) and Kevin (Pope Jerrod), residents of Clybourne Park, now predominantly black and who are determined to hold onto the neighbourhood, its culture and historical character.

It is in Act II that Norris unpacks all that swirled around Act I. The history of property and capitalism in the US, racism, privilege and white unconsciousness. The demanding script sparkles as the characters, who meet in the now dilapidated interior of the 1950s home, talk over and across each other. It is when the new residents are confronted that the caustic humour of the play finally explodes and spills across the stage.

Everything about this Fugard Theatre production is lovingly and carefully supportive of the text, brilliant cast and drama including Saul Radomsky’s imaginative and detailed set (which has to be “ruined” in Act II), which renders the monochrome heaviness of ‘50s suburban décor. The house is as much a character as the humans who inhabit the space.

Birre le Roux’s costumes are impeccably time bound while lighting design by Kieran McGregor and sound design by Charl-Johan Lingenfelder add to the subtle layering of it all. This production also brings together some of the finest acting talents in the country who are just wonderful to watch on stage. If you like your theatre provocative but caustic and witty, don’t miss this. On at the Fugard Theatre in Cape Town until 1 October. DM

Photo: Lesoko Seabe and Pope Jerrod as Lena and Kevin in a scene from Bruce Norris’ Clybourne Park (Photo by The Fugard)