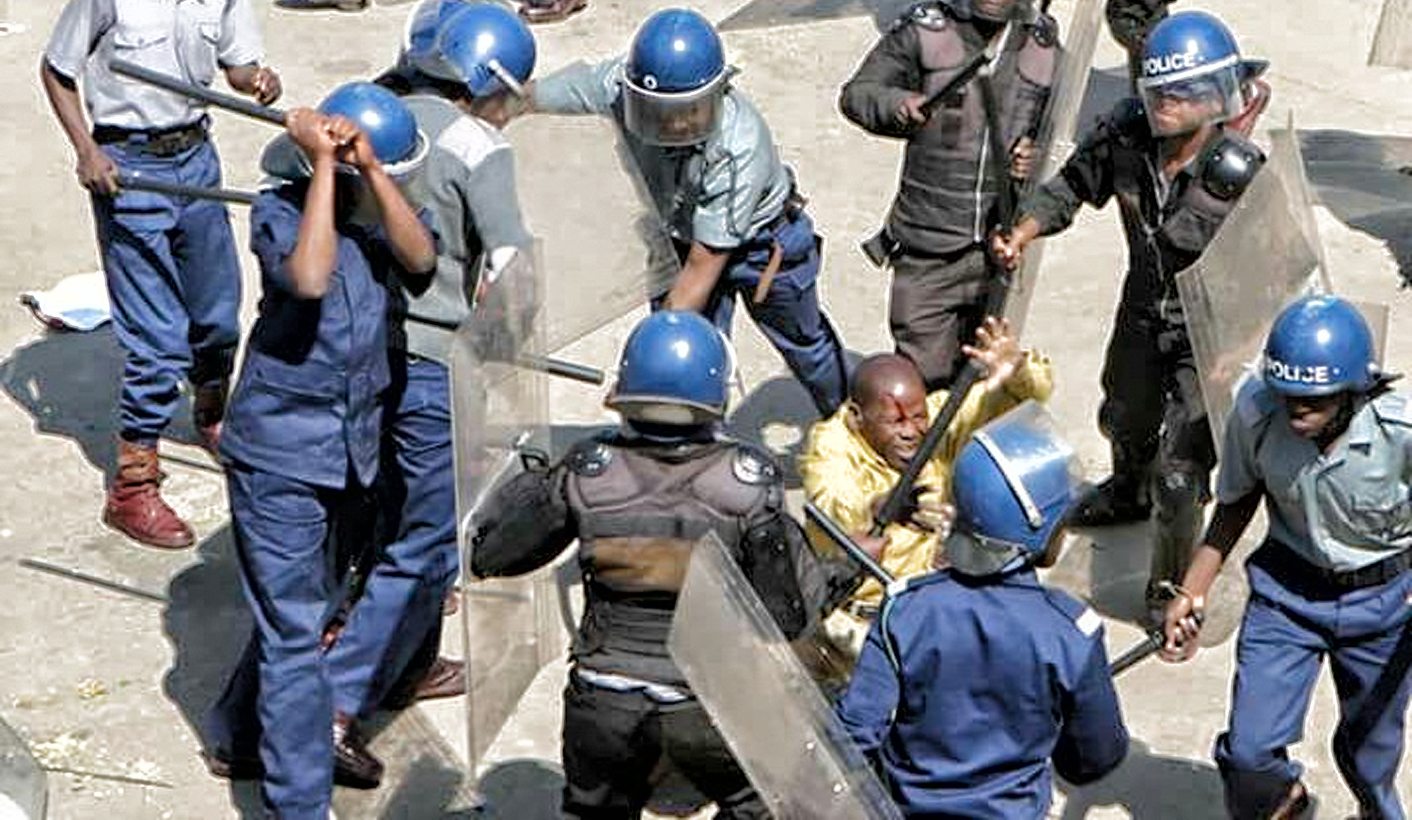 Throw your stilettos at police, urges one of many WhatsApp messages as protesting Zimbabweans try to make their way around the chaos. By an ANONYMOUS Zimbabwean Reporter.

Tawanda*, who sells illegal sex boost drugs on the streets of Harare, says three options face him every day in Zimbabwe’s riot-torn capital: “Police jail me for being a rioter; protesters loot my shop or I simply join the riots.”

“I am proud that I can simply slot my medicine bottles in my pockets and join the protesters calling for a change of government. I am angry that the rioters or police can loot my business any time, or smear it with tear gas, or worse – throw me into prison,” says 32-year-old Tawanda.

Daily riots against the government of Robert Mugabe are forcing Harare’s residents to plan each day well in advance. Just getting to or from work is a problem.

“How is the city today? Which roads are safe? Where is the tear gas convoy heading tomorrow?” are WhatsApp messages doing the rounds on Zimbabwean cellphones daily. “The city’s security situation is like a malaria patient whose blood pressure must be monitored hourly,” says one message.

“One cannot simply catch a taxi into the city in the morning without knowing which Harare roads are clear of police water cannons. It would be deadly,” says Tawanda.

He scratches his arm to numb the pain where blue water from police cannon discoloured his skin and left an itch.

“I have to sell my sex-boost pills or join the rioters. I choose to protest,” he says.

It is easier now than in the past for leaders to assemble thousands of protesters, says Sten Zvorwadza, the leader of the Vendors’ Union of Zimbabwe.

“We have thousands of college graduates roaming Harare streets selling water bottles or phone recharge cards. They simply fold their wares into their pockets and melt into protests, any time, any day.”

Zvorwadza himself has been detained several times and beaten under the glare of international television for asking that Phelekezela Mphoko, Zimbabwe’s vice-president, end a hotel stay that is reportedly gobbling $300,000 of taxpayers’ money every week.

Sandra*, 24, is a waiter at a South African-owned chain restaurant in Harare. She comes from Mbare Township, the capital’s poorest suburb and hotbed of resistance to Mugabe. She sees it as her duty to spread advice on WhatsApp about dealing with tear gas.

“These days before I dress in my work apron, I carry a wet towel and a tube of foam water – to wash over my eyes in case police tear gas splashes into my eyes.”

Panicked police commandos in Harare, overwhelmed by fast-moving rioters, are resorting to throwing tear gas canisters into packed minibus taxis. Passengers scramble into the streets, drivers abandon their minibuses and scuttle for cover under bridges.

“Dear group members,” writes Sandra on WhatsApp, “In case of police dogs, water cannons, tear gas etc – run away from a crowd; flee in an opposite direction; pull old women and children into flowerbeds under bridges; run as fast as you can; forget your expensive stiletto shoes; rather throw your shoes into the face of police dogs.”

For Tawanda and his sales of a “Tsunami” sex drug imported illegally from Tanzania, the battle against tear gas is more commercially damaging.

“Crowds looted my shop without thinking for a moment that I am in support of the demonstrations.”

It’s not only Tawanda’s shop that is a victim of looting. A supermarket belonging to vice president Phelekezela Mpoko was chanced upon by rioters last week. Dozens got away with merchandise in the ensuing disorder.

Watch: Zimbabweans in Cape Town: “We Need Our Country Back”

Organisers of the Zimbabwe protests under the banner of the “Tajamuka” pressure group have announced a shutdown of the country every Wednesday until Mugabe resigns. “Tajamuka” means “we have rebelled” in Shona.

Penyo*, 21, is a mechanical engineering student at a technical college in Harare.

He describes himself as a “stone carrier”. These days, he says, his studies take second spot to public activism.

“Every morning I carry a backpack of books, of stones, and spikes.”

Spikes are short metal rods that are sharpened to hook or slice.

“The aim is to ghost through the chaos of riots and deflate tyres of police water cannon lorries and vans,” says Penyo. “It is scary.”

While crowds flee for cover from the bowsers – the vans which spray the itchy water – he takes advantage of the tear gas mist to punctures the tyres of police vehicles.

* Not their real names

Photo: In this photo by an unknown photographer, police in Harare appear to beat a man.