Pretoria Girls High:  A protest against sacrificed cultures and identities 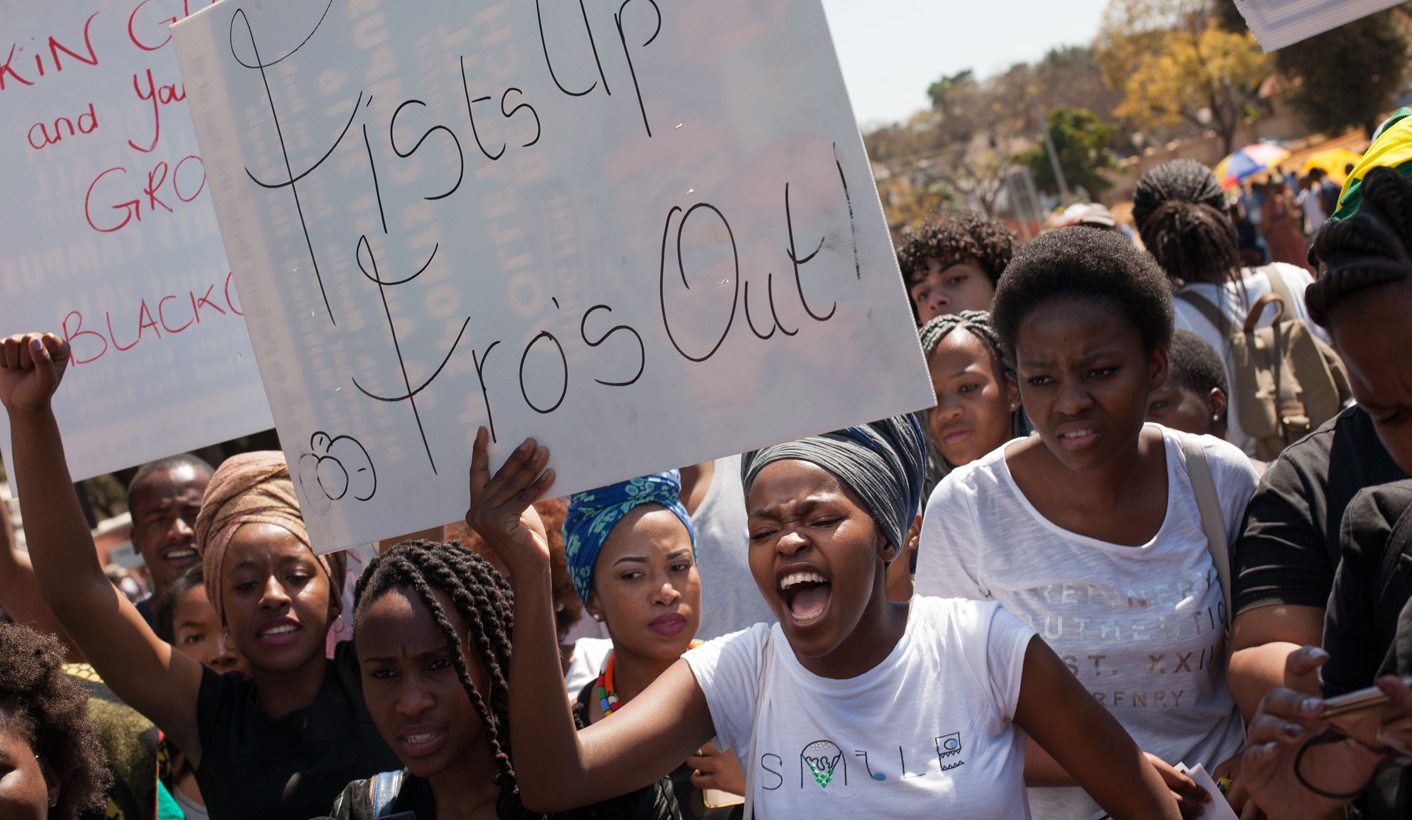 On Saturday, students at Pretoria High School for Girls stood against racism at the former white-only institution. As political leaders intervened, GREG NICOLSON spoke to students and found that the issues spread across the country.

The videos appear to show a heated exchange, but when the protest turned confrontational on Saturday, matric students Malaika Maoh Eyoh and Palesa Sedibe*, both 17 years old, felt tired. They were in their fifth year at the school and had seen black students, even teachers, teased and humiliated, broken as they were forced to sacrifice their cultures and identities.

Sedibe never wanted to go to the school. Her friends had gone elsewhere and Pretoria Girls strictly enforced “petty rules” – no hugging in the hallway, no drinking while walking. It was okay, she said at Hatfield Plaza on Monday, wearing black jeans, a black T-shirt and a doek, until last year when staff kept raising issues with students who have afros.

Eyoh remembered how in Grade 9 she cut her relaxed hair and grew a small afro. A teacher said her hair was distracting other students from learning.

“That’s their favourite,” she said, wearing camouflage cargo pants with a white T-shirt, her hair now braided. “It was aggressive and made me feel really scared to come to school.” Her mother intervened and the school backed off – “basically just invalidated the whole experience”.

Like those who know an issue too well to cite specifics on an outsider’s general request, as the pair continued they remembered more and more instances of racism. There was the student pulled out of class and given Vaseline to flatten her hair. The times teachers told them “to stop making those noises” when they spoke among themselves in local African languages in class. Yet Afrikaans conversations proceeded unchecked. There was the story of the white camp instructor who said he wouldn’t date black girls, and when questioned, the students were told not to tell their parents. There were girls who, when singing, late for class, were called monkeys by a teacher then told it’s not about race. There was the time Nelson Mandela and the ANC were called terrorists. There are the stories from the hostels, where students live closer to staff and black girls are, said Eyoh and Sedibe, essentially told not to be black.

“I know for the last year alone I’ve had more conversations with girls at school about race than any other year,” said Eyoh.

Two issues seem to have led to black students at Pretoria High School for Girls deciding to challenge racism. Zulaikha Patel, the small 13-year-old captured standing up to large, white, male school officials, recently delivered a class speech on black female activists. Her teacher, they said, called it racist and said it lacked research. Then a black student wore a doek to eat at the hostels. It was as if she had worn a hoodie or beanie to dinner. In solidarity, students paraded around the hostels in doeks all night.

It was the last straw.

The message spread through word of mouth. On Friday, students were allowed to wear casual clothes and the black girls spread and told each other the plan – wear black with a doek. They went to assembly, where security guards were present, something past and present students said they had never seen before. Eyoh and Sedibe said students with ANC-branded clothes were singled out, despite the school’s code of conduct apparently not ruling against wearing political insignia when students are out of uniform. The black girls with doeks were hailed as examples of students supporting Women’s Month. They knew it meant their message had been ignored.

Saturday was the Spring Fair, the biggest day on the Pretoria Girls calendar. The same students decided it was time to stand up. They planned to march from the netball courts, silently, hand-in-hand, to the front of the school. Once they started, a gate inside the school was closed, splitting the group. The commotion led others to watch. “Snaakse groepie,” a security officer said in his lapel mic. Some girls said they were pushed.

The gates were opened and protesting students were split, but about 50 girls congregated at the front of the school.

“It was just all white men,” said Eyoh on those guarding them. There were no reports of violence on Saturday and students say the chaos began when they were confronted. Parents, all seemingly white, seemed to have taken security roles as part of either the school governing body or parents’ association. Young women, like Patel, were threatened with arrest. A woman on a golf cart told the students they could be expelled, before she grabbed a girl’s phone once she realised she was being filmed. Students felt provoked by the same systems they were fighting against.

“It was just that there were a lot of emotions because the last five years of our high school student careers had built up to this,” said Eyoh.

An immediate meeting was called with school officials, parent leaders, and students as the protesters were told it was not the appropriate forum to raise their issues – they were interrupting families at the fair. Sedibe went back to the fashion show as the fair continued. Eyoh went to the meeting but left once she felt the same process was being repeated: Acknowledge the grievances but do nothing about them, and belittle the complainants in the process.

Both girls napped when they went home. Then they checked social media.

“It blew up a lot faster and harder than we thought it would,” said Eyoh. The issues are almost an unspoken norm in many former white schools, but she added, “It takes a while to appreciate your skin colour, appreciate the hair you were born with when they take any chance to make you feel uncomfortable in you skin.”

The Pretoria Girls policy on hair reads, “Cornrows, natural dreadlocks and singles/braids (with or without extensions) are allowed, provided they are a maximum of 10mm in diameter. Singles/braids must be the same length and be the natural colour of the girl’s hair. Braids shorter than collar length must be kept off the face with a plain navy or tortoise shell Alice band. Longer braids must be tied back… No patterned cornrows.”

The protest against racism at Pretoria Girls has led other black students to reflect on their own time at former white schools, discussing issues of subjugation during democracy. Neo Thale, who matriculated from Mafikeng High School in 2007, remembered concocting a story to allow him to keep his dreadlocks, telling the school it was his mother’s dying wish. Lizwe Ncakula went to Rhodes High School in Cape Town and said her hair wasn’t seen as “ladylike”. “It took years to undo that damage not only to my scalp but my sense of self-love and appreciation for who I am.”

Busiwe Kabane, 23, went to Eunice Girls High in Bloemfontein. She claimed black students were singled out for singing “ethnic songs”; the school had only a single black teacher in its history, and those speaking black languages were reprimanded while Afrikaans was allowed.

“I’m 23 years old now and the wounds from my high school experience have really affected me. I’m still angry. It has affected my confidence in my abilities. I’m hyper-vigilant and mistrusting of almost any white space,” said Kabane. “The thing that upsets me most is that children are vulnerable and defenceless at school. To be reminded daily that you are less-than is a lot. Self-hate is essentially being indoctrinated into you. And you are powerless.”

Mishka Ismail Wazar, who matriculated from Pretoria Girls in 2015, said there was “blatant unfairness” in how staff and students criticised the way black girls speak, walk, talk, and look. Policies at the hostels appeared to try to “wash the black off them”, she said. The school is strict, she added, and complaints were discouraged and rarely listened to. But current students appear to have benefited from the trickle-down effect of university student politics.

Sinazo Magadlela, who also matriculated last year, said there’s a culture at the school of hiding difficult issues. Black teachers, who students say are in the extreme minority, and a receptionist who made announcements, repeatedly faced racism, said Magadlela, which went unchecked. “If you don’t want to come to the school you can find another school,” she said she was told when she raised issues. Students have found a level of “wokeness”, she said, to now raise their issues.

Leago Mamabolo, 18 and in matric at Pretoria Girls, said students have had enough. She is the student referred to in reports of teachers complaining of girls coming to school with a “bird’s nest” because of her dreadlocks, telling her to fix her hair “as if it’s broken”. It’s not just about hair, said Mamabolo, “You’re in fear when you go to school because you know you will be policed.”

Political parties on Monday jumped on the issue, with the ANC Women’s League, Economic Freedom Fighters and Democratic Alliance all issuing statements. Gauteng Education MEC Panyaza Lesufi as well as new Tshwane Mayor Solly Msimanga visited the school. Lesufi said no pupils speaking out on the issues should be charged by the school as a committee is appointed to look at the complaints and that the SGB should apologise. Policies at schools across the province need to be scrutinised, said Lesufi. The school on Monday could not be reached for comment, but in a press conference its SGB leader appeared to follow the MEC’s lead of concern over the claims.

Eyoh said there are good aspects to the school. You can get a good education and the teachers are decent.

“But there’s stuff like this that needs to be spoken about. It’s not just irises and fun green dresses.”

It’s time for proper dialogue, and action, they said, so the younger students don’t have to go through what they’ve experienced. DM

Photo: ‘Fists up, fros out’ — University of Pretoria students and former Pretoria Girls students protest outside the high school amidst claims of racism on Monday. (Greg Nicolson)