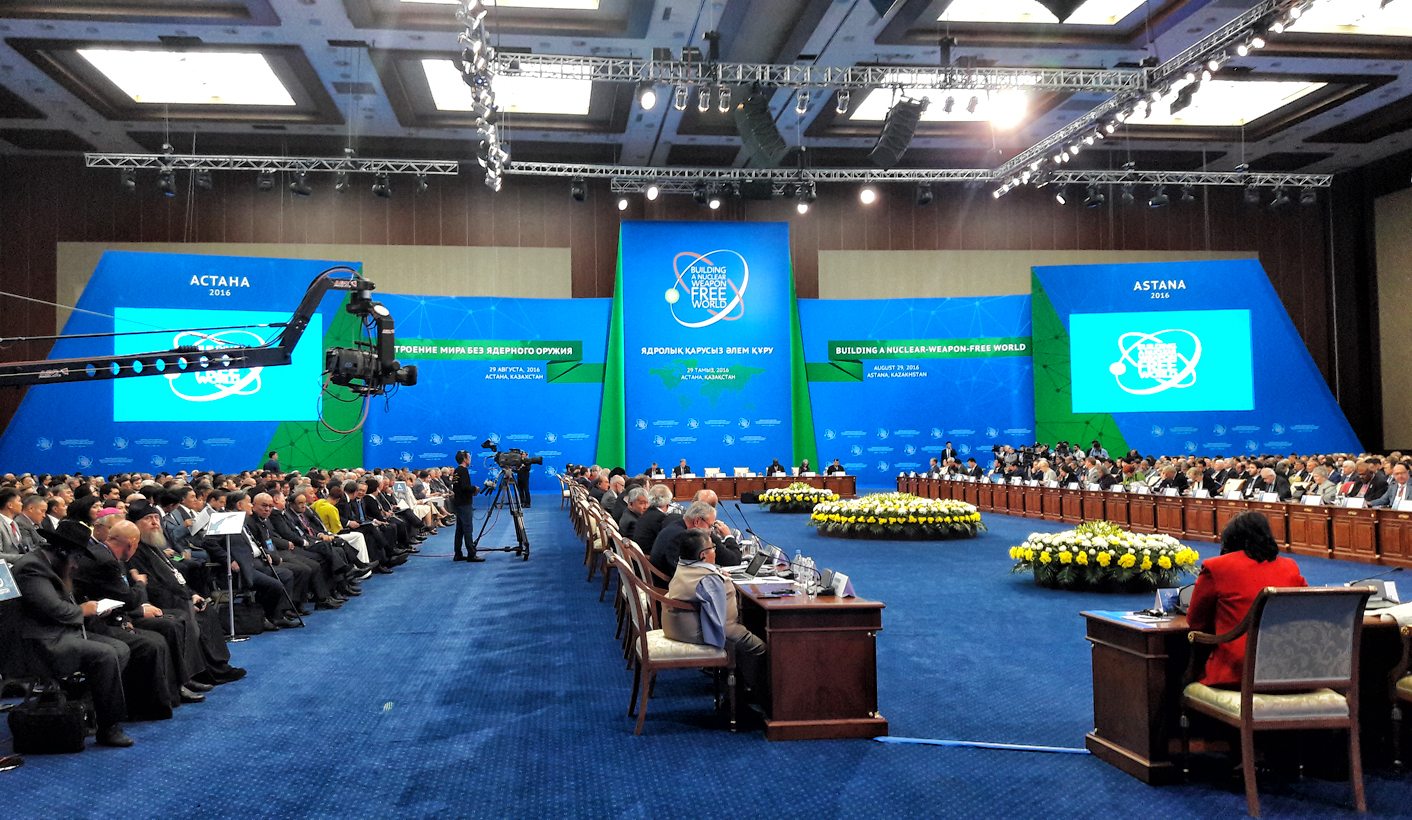 Kazakhstan has emerged as the unlikely leader of the global campaign to eliminate nuclear weapons. With a tragic nuclear history, and a president eager to make a name for himself on the international stage, this makes more sense than you might think – even if it probably won’t make much of a difference. By SIMON ALLISON.

Nukes are the ultimate accessory for power-hungry presidents-for-life. Saddam Hussein wanted one, Kim Jong-un’s got a few, and Iran’s ayatollahs had to be strong-armed into channelling their nuclear research into energy instead of war.

Nursultan Nazarbayev has chosen a different route. In some ways, the president of the Republic of Kazakhstan is a textbook dictator. He’s been in charge since independence, and has a well deserved reputation for suppressing free speech and torturing dissidents. But instead of craving his own weapon of mass destruction, he has become the face of the struggling movement to eliminate nuclear warheads, which makes him an unlikely crusader for world peace.

On Monday, in his capital Astana – the Dubai of the steppe, the jewel of central Asia, a city so new that it literally sparkles in the semi-desert sun – Nazarbayev hosted delegates from 50 countries in a conference dedicated to “Building a Nuclear Weapon Free World”, including representatives from the Pan-African Parliament and Parliamentarians for Nuclear Non-Proliferation and Disarmament. Campaigning against nuclear weapons is a central tenet of Kazakhstan’s foreign policy, and the conference is the country’s showpiece initiative; an attempt to consolidate and co-ordinate global efforts to ban the bomb.

The event is doing wonders for Nazarbayev’s cult of personality. Delegates showered him with compliments – “A farsighted thinker that the world must be grateful for”; “a trailblazer and an inspiring model”; “the president is showing us the way towards a better world” – while one was so overcome with emotion that he recited an appropriately-themed poem in Nazarbayev’s honour.

“My beloved nomad/ You are the hero of the day/ Your free spirit can’t be exterminated by a nuclear bomb.”

It rhymes better in Azerbaijani.

It helps Nazarbayev’s cause that Kazakhstan occupies the moral high ground on this issue. While still part of the Soviet Union, Kazakhstan’s Semipalatinsk region was Moscow’s favourite nuclear testing ground. Between 1949 and 1989, the area was hit by a staggering 456 nuclear bombs. Hundreds of thousands of people were exposed to radiation, and an area the size of Germany contaminated.

“Kazakhstan has suffered from nuclear tests more than any other country in the world,” noted Nazarbayev in his opening address.

Kazakhstan is also one of only four countries in the world to have given up its nuclear weapons. South Africa belongs in this exclusive club too, along with Belarus and the Ukraine. But the club needs to expand.

“As for the permanent United Nations Security Council states, they have the largest nuclear arsenals and the largest responsibility on this issue. It would be desirable for them to lead this work and show the way,” observed Nazarbayev. “We still have a chance to make the world a safer place.”

Fine words, but not a single nuclear power bothered to send a representative to Astana, underscoring just how low nuclear disarmament lies on the global agenda. Even here, in the midst of the anti-nuclear lobby, it feels like a hopeless cause.

But even hopeless causes are sometimes victorious, as Ela Gandhi well knows. Her grandfather, a certain Mahatma Gandhi, took on the might of the British Empire with little more than a pair of sandals – and won. The South Africa-based activist told Daily Maverick that there’s no such thing as a hopeless cause, especially when that cause is so self-evidently just.”

“Hope is the most important force that humankind has. The minute you lose hope, well, you’ve lost everything. About nuclear weapons we have to work hard. Because there is only a small group that is working for nuclear in the world. There are more countries that want nuclear disarmament than those who want weapons. So the majority have to become assertive, the majority have to have a bigger voice, and to use every argument possible to get the minority to change.”

The most moving argument of all came courtesy of Maria Ananyeva, a tiny old lady who interrupted proceedings and demanded to speak. Kazkhstan’s foreign minister, knowing when he was beat, gave her the floor, and she described her experience of growing up in the shadow of a nuclear holocaust in Semipalatinsk. She told her audience:

“I saw my first bomb when I was a child in my mother’s tent. It made a disc so huge, enormous, like a planet on the horizon. We felt the heat from that cloud. I was curious, I wanted to see what happened. The disc disappeared and then there was a mushroom. Then the tent was shaking like a matchbox. People tumbled around, some broke their bones. After the blast, the dogs would run away, barking and screaming. I have been affected by the equivalent of 45 Hiroshimas, but I turned out to be a survivor. And I care about the lives of my children.”

Testimony like Ananyeva’s is a powerful reminder that even in the absence of war, nuclear testing still causes devastating, long-term damage. And although most countries don’t test any more – North Korea, as usual, is the exception to the international norm – the United Nations’ Comprehensive Nuclear Test Ban Treaty remains unratified, and therefore unenforceable.

Even less enforceable is the Astana Vision Declaration, this summit’s showpiece proclamation. It’s full of noble aspirations – including a call to eliminate nuclear deterrence in security doctrines, and for nuclear states to make “deep cuts” to their nuclear weapons stockpiles – but short on specific, achievable measures to overcome the intransigence of nuclear powers.

In the absence of these practicalities, all we’re left with is hope. Let’s hope that the Gandhis were right. DM

The author’s travel to Astana was supported by conference organisers.

All photos by Simon Allison.