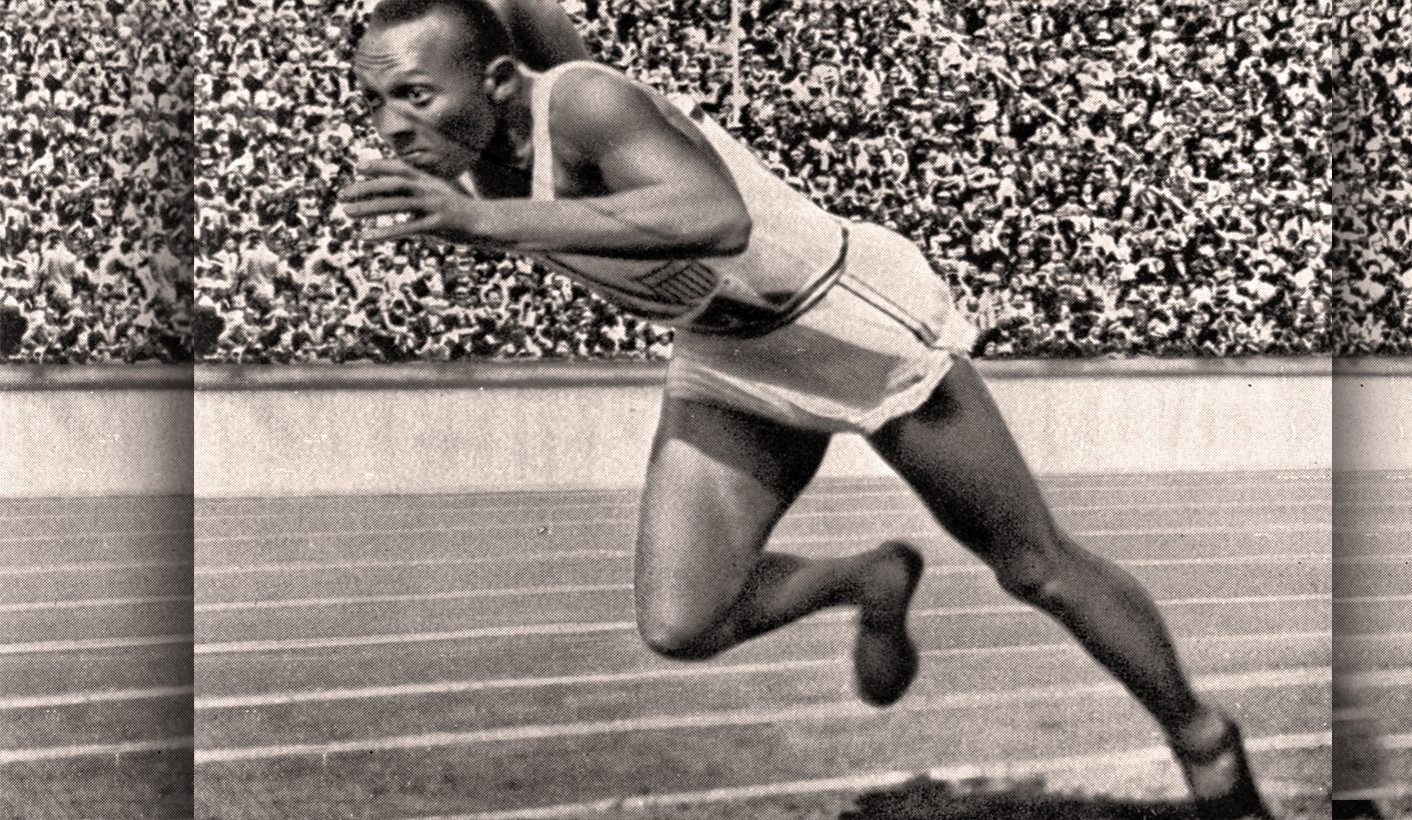 At the 1920 Olympic games, Bevil Rudd won gold in the men’s 400m dash. Like Gold medallist Wayde Van Niekerk almost 100 years later, Rudd was South African (he was also 24 years old). But Rudd’s time, 49.6s, was more than 6 seconds slower than the performance (43.3s) that won Van Niekerk gold. For most of the past century, athletic performance has been improving, and the gap between men and women narrowing. But Rio may be the beginning of the end of a winning streak for humanity. By ANDREA TEAGLE.

Gold performances in the Olympic games, from the days of Rudd to Van Niekerk, run in steady lines of improvement, like scattered stars climbing to the apex of the sky. An analysis of data reaching back to 1896 reveals this same pattern, to varying degrees, across athletics events – some of which, the 400m, 800m, 10,000m, shot put and javelin gold performances – are plotted in the graphs below. It’s easy to imagine trend lines through the men’s and women’s events. For the longest time, it seemed humans were running ever faster, jumping ever higher and throwing ever further.

In 2008, researchers from the University of Verona analysed trends in Olympic records, specifically (as opposed to all gold medal performances), over time. Led by Professor Giuseppe Lippi of the University of Verona, the team found that the progression of records across athletics events follows a linear trend for most of Olympic history.

Intriguingly, Lippi and his team found that the improvement in women’s events outstripped that of men’s. Yet, in a recent post, Professor of Exercise Physiology with the School of Medicine of the University of the Free State, Ross Tucker, notes something very interesting about world records (not limited to the Olympics) since the 1970s. In the last five decades, the number of new records has declined for both sexes; for women, it has positively plummeted.

To illustrate, a whopping 100 new women’s records in the 1980s is followed by just 14 in the 1990s. Indeed, in Lippi’s study, the steep lines of progress in women’s athletics records are cut off abruptly around 1990. It wasn’t just that the record progressions slowed down after that; in some sports, they stopped altogether. (You can see some of these spikes in the graphs. Again, note that world records achieved outside the Olympics are not plotted here.)

This is widely believed to point to one of the most well known factors that drive improvements in sports: doping. In this case, documented state-sponsored doping. Until the late 1980s, when authorities introduced out-of-competition testing, says Tucker, who has written extensively on the subject, “you could literally dope for months, stop for a week, then compete, and be clean”.

“The iron curtain went up and the Eastern European countries invested quite heavily into state-sponsored doping programmes. East Germany was the most famous of them, Soviet Union was the biggest of them… It’s no exaggeration to say that they saw sporting success as a way to show economic power.”

In those training programmes, athletes were given anabolic steroids and told that they were vitamins. One of the most famous victims of state-sponsored doping programmes was East Germany (then German Democratic Republic) shotputter, Heidi Krieger, today Andre Krieger, whose testosterone levels were artificially elevated to 37 times that of an average woman at the time. Krieger’s 1986 gold medal was revoked, but most during that time remain, as foul play could not be proven.

Male athletes were also doping, of course, but the impact on records was less pronounced because their testosterone levels are naturally higher to begin with. A year after GDR’s glowing performances at the Montreal Summer Olympics, the top East German sports doctor, Manfred Hoppner – regarded as one of the architects of the state sponsored doping programme – stated, “Performances could be improved with the support of these drugs [anabolic steroids] as follows: Shot put (men) 2.5-5m; Shot put (women) 4.5-5m… 800m women 5-10sec.” To drive his point home, Hoppner added, “From our experiences so far, it can be concluded that women have the greatest advantage from anabolic hormones.”

Infographic: 100m and 400m through history

Of course, looking only at Olympic records – the outliers – obscures the underlying trends in Olympic gold performances post the 1980s. Plotting the gold medal performances reveals that for some events, times are still gradually improving: for example, the 100m has seen steady year-on-year improvement since 2000, even though the 1988 record by USA’s Florence Griffith-Joyner has yet to be broken. In other events, like the 400m and 800m, the curves for both men and women do seem to be flattening out (this is true even if we ignore the 1980s records).

As the steady improvements through the rest of history reflect, there are other factors that drive Olympic improvement, and other reasons aside from stricter regulations for the recent slowdown. An obvious one is technology. Comparing South Africa’s two 400m golden boys who competed almost 100 years apart isn’t really fair, because the conditions meant they were essentially running different races. A particularly big game-changer was the introduction of tartan track surfaces for the first time in the 1968 Olympics. Then there are factors such as training schedules, diet plans and better techniques (for example, the invention of the Fosbury flop in high jump). And on-the-day conditions that might particularly affect longer distance performances.

Aside from external conditions, have runners themselves changed? Faster times also reflect a much bigger pool of athletes, as more and more countries began to partake and the global population expanded. “It’s not necessarily that a given population is changing,” says Tucker. “Rather it’s just saying that the people who participate have changed.

“In men’s athletics, it was only in the 1968 Olympic games that Kenya finally came out onto the world stage. And then there were boycotts and all sorts of political things in the ‘80s… If one subscribes to the opinion that the East African runners have some kind of genetic predisposition for running, then, as they turned their attention to the event, they drove the times up naturally,” Tucker says, adding that top performances reflect a number of factors including training and natural ability.

Geopolitical, economic, and commercial issues might also influence performance trends at a population level. Whereas in developed countries, youngsters with athletic potential might be drawn into other industries, this is less likely in developing countries where career opportunities are more limited.

In the University of Verona paper, Lippi and team note that over the course of Olympic history, the events in which the greatest improvements have taken place are the longer distance runs and strength-based events such as shot put and javelin. The authors speculate that this is probably due to the fact that sprint performances depend primarily on two variables – reaction time and fast muscle fibres – while “endurance athletes’ performance is regulated by slow muscle fibres, and by aerobic capacity; the latter can be substantially increased by either regular training or manipulation (e.g. blood doping)”.

Interestingly, their analysis of Olympics suggests that the improvement in women’s Olympic records is overall greater than men’s, but if one factors in the likelihood of at least some doping-enhanced records in the 1980s, does that still hold true? Increasing levels of interest, participation and investment in women’s sport may also have contributed to steeper initial levels of improvement (reflected in greater improvements in record performances).

The history of the women’s 800m neatly encapsulates sexism in athletics: it was introduced in 1928 only to be dropped by the International Olympics Committee on the grounds that it was too great a distance for women to handle. (I kid you not.) The event was not reintroduced until 1960.

Plotting the data on the graphs of Olympics Gold performances does seem to show this, in running events at least, with an initial steep improvements in women’s times followed by a relatively steady gap between men’s and women’s performances. In the 10,000m, where women only started participating in 1980, the two curves still appear to be converging.

Back in 2010, Israeli physicist Ira Hammerman explored the relationship between men’s and women’s performances, and discovered that across a remarkable variety of sporting events (from kayaking to swimming to skating), women’s top performances consistently hover at about 90% of men’s performances. Note that this does not hold true for shot put and javelin: women’s shot put performances have just about caught up to men’s, but the weights differ (roughly 3.63kg for women and double that for men), making comparison difficult.

As sport becomes increasingly specialised, and training techniques perfectly honed, it seems inescapable that we’ll hit – have already started to hit – natural, physical limits for both the sexes. That makes Van Niekerk’s World Record and Semenya’s national records all the more remarkable. DM