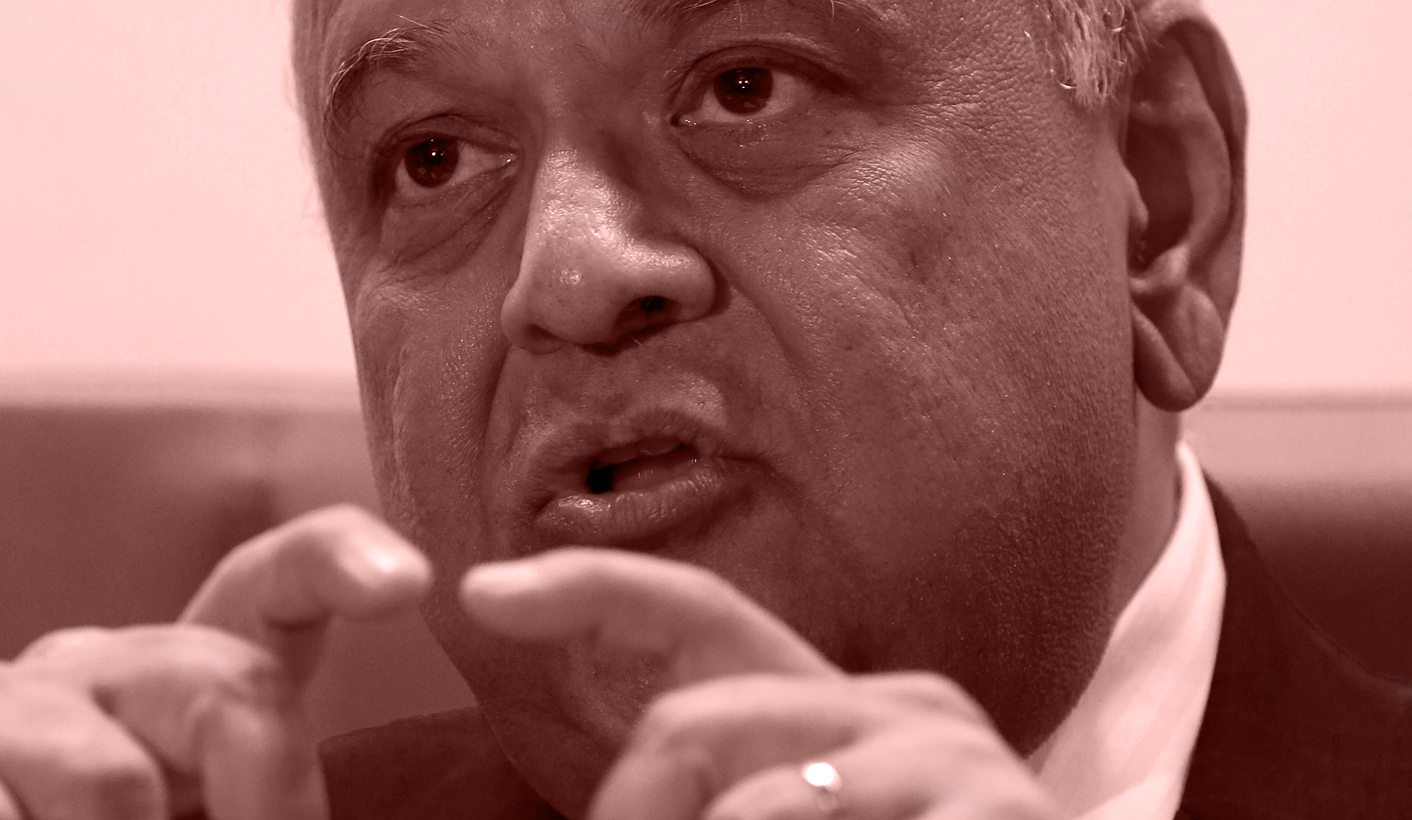 Finance Minister Pravin Gordhan might soon be arrested on criminal charges. On Wednesday, however, he was not afraid to speak with authority on improving the economy. By GREG NICOLSON.

When Pravin Gordhan was reappointed finance minister in December, he said he was focused on regaining the confidence lost after “9/12”. President Jacob Zuma had just fired Nhlanhla Nene, appointed Des van Rooyen, and days later, as the markets dived, given the job back to Gordhan. Amidst the turmoil, Gordhan was determined to arrest the immediate economic dive and then get the economy working to improve the lives of South Africans.

Speaking on Wednesday evening, during another crisis that could sink the country’s economy, Gordhan again remained positive. He was hopeful South Africa could improve, but was realistic about its challenges. “Congratulate yourself as South Africans. There’s hope for us. Don’t worry,” he said, despite the possibility he might be arrested on criminal charges.

Gordhan was speaking during a debate hosted by the Cape Chamber of Commerce & Industry in Cape Town with media personality and political commentator Justice Malala. Since Gordhan returned as minister of finance, he has been in battle with the police’s Hawks, who look to charge him over the establishment of the SARS “rogue unit”. This week, the charges returned to the fore, after the local government elections were settled. It raised worry over whether Zuma is now trying to oust Gordhan for control of the treasury.

“I don’t know whether I did the right thing but that’s a different matter,” said Gordhan on returning to the post of finance minister last year. “Our job since December 2015 has been to work with business and labour leaders and ensure that the kind of gloom that 9/12 produced doesn’t repeat itself. I certainly hope it doesn’t do that now.”

The minister spoke confidently about the challenges facing the economy and the improvements needed. But he subtly expressed views about more controversial issues. He made a comment on those who have beneficial deals on coal with Eskom, likely a swipe at the Gupta family’s alleged dodgy deal with the power provider. He said the ANC can continue to offer the leadership it has provided for 104 years, but it must deal with its challenges. On the crisis at South African Airways, he said in a “diplomatic statement”, “We’re working on it.”

A treasury official recently said the state could not cover another zero percent increase on tertiary education fees, but Gordhan on Wednesday said free education for the poor was possible if corruption were curbed. “Stop the bloody nonsense,” he suggested on how to start improving the lives of all South Africans.

In a statement on Wednesday, Gordhan confirmed the Hawks summoned him to their offices on Thursday at 2pm to obtain a warning statement. He consulted his lawyers, who found he was not legally obliged to honour the request. Without being prompted, Gordhan read his full statement out to the Cape Chamber audience.

Gordhan listed three reasons for his decision not to visit the Hawks. In May, Hawks head Berning Ntlemeza said he was not a suspect of investigation. Gordhan said he had already responded to 27 questions sent by the Hawks on the issues. A letter from the Hawks this week also made assertions “wholly unfounded on any version of the facts” and in breach of the National Strategic Intelligence Act and Public Finance Management Act, he continued.

“I therefore do not intend to present myself for a warning statement for many considerations, both legal and given my other commitments. I remain committed to assist the Hawks in any bona fide investigation as stated in my statement. I have a job to do in a difficult economic environment and serve South Africa as best I can. Let me do my job,” said Gordhan.

Writing to Gordhan this week, the Hawks’ head of organised crime Major General MS Ledwaba cited contraventions of a number of laws. The request for a warning statement related to the terms of agreement former deputy SARS commissioner Ivan Pillay took an early retirement package, SARS collecting intelligence contrary to the law, and what Ledwaba said was related unauthorised expenditure and corruption.

Gordhan’s lawyers from Gildenhuys Malatji Attorneys replied, “Your request, out of the blue, that the minister give a warning statement on the matters listed in your letter, comes as a surprise for various reasons. First, the head of the Hawks, Lieutenant General Ntlemeza, assured us in his letter of 20 May 2016 that ‘the minister is not a suspect in this investigation’. Second, the minister has already given his account of the matters listed in your letter.” The lawyers said the SARS intelligence unit did not contravene the Intelligence Act and issues over Pillay’s employment were legal.

The Hawks have come after Gordhan before. In the months after his reappointment the Hawks pursued the finance minister while he was preparing the country’s budget. Speculation from commentators suggests Gordhan is a marked man and allies of the president want him to be removed after charges are laid. A more pliable replacement might then instruct the treasury to approve certain deals seen as beneficial to Zuma’s allies.

The rand has already declined in response to the Hawks’ continued pursuance of Gordhan, a number of economists have warned the consequences for the country’s economy could be dire if the finance minister is arrested.

Gordhan was summoned by the Hawks along with former Pillay, former SARS group executive for tax and customs enforcement investigations Johann van Loggerenberg, Pete Richer, former SARS head of strategic planning, and the initial head of the investigative unit Andries van Rensburg. Van Loggerenburg and Pillay confirmed in a statement on Wednesday they would visit the Hawks on Thursday. Van Rensburg has already presented himself to the Hawks. Civil society leaders including Section27’s Mark Heywood, Advocate George Bizos, former Constitutional Court Judge Johann Kriegler, and Francis Antonie from the Helen Suzman Foundation will rally outside the Hawks’ offices as the former SARS officials meet the Hawks.

“This is a critical moment in our nation’s future. There have been extensive discussions today with many different groups on how to respond. Feel free to join tomorrow and exercise your right to participate in and protect our democracy,” Heywood wrote on Wednesday. DM