ANC: Divided. Confused. No plan. (Except in Gauteng) 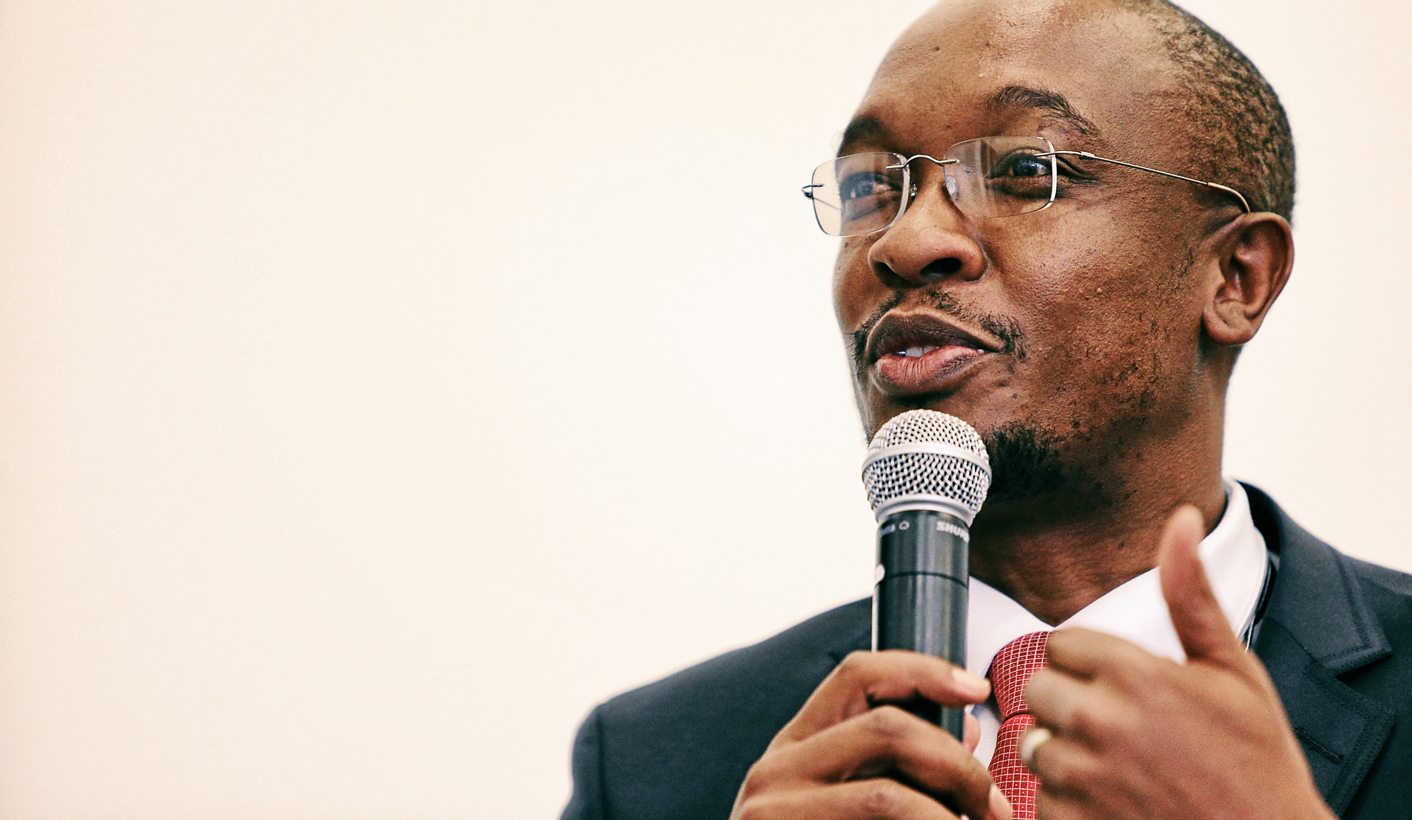 The last few weeks have seen the ANC in a situation in which it has never been before. It’s suffering from its biggest ever electoral setback, it has lost billions in patronage, and its leader has become a subject of caricature, ridicule and scorn. And yet the party does not appear to have a unifying strategy. Different parts of the ANC appear to be following different directions, and achieving different results. But more and more, it seems, the centre of the ANC is not holding. The Finance Minister is under attack and the party remains silent. The rand slides and the party remains silent. A power grab for state resources appears to be under way and the party remains silent. The longer this goes on, the harder it will be for all of Gwede’s horses and all of Gwede’s men, to put the party back together again. By STEPHEN GROOTES.

The gravity pull of the centre of the ANC has been weakening for nearly two decades. In some ways, it is a myth that it has always had deep roots among the people in all parts of the nation. That is not to dispute the place it may have had in people’s hearts, but merely to point out that it did not have formal structures on the ground in most places. Its powerful branch structure did not exist in the 1980s. When Nelson Mandela came to power, big decisions could be made easily at the centre. Since then the centre was hollowed out in favour of the provinces. Still, there was a coherence to the structure, a set of rules were followed, a direction in which the whole body was moving.

In the last three years, that sense of shared direction has begun to dissipate. It seems the results of the local government elections have only sped up the process. Events of the last few days have demonstrated this process to a remarkable degree.

The most obvious example is the decision by the Hawks to demand that Pravin Gordhan present himself to answer pre-charging questions. It’s important to remember that up until this point, the only complainant in this case is the current SARS commissioner, Tom Moyane. And yet, the Hawks are prepared to cause very real damage to our country by pursuing the case. There can be almost no doubt that President Jacob Zuma is behind this. He has allowed as flawed a person as Mthandazo Berning Ntlemeza to run the Hawks (after being found by a judge to have lied under oath) and has made no public criticism of him.

Earlier this year, in February, the Hawks sent a list of questions to Gordhan. In what looked like a suspiciously co-ordinated set of events, the ANC issued a statement, in the name of Gwede Mantashe, condemning the Hawks for sending the questions just a few days before Gordhan’s budget speech. The statement came during a day in which Trevor Manuel said he would fire Moyane if he could in the morning, the ANC spoke just ahead of lunchtime, and Gordhan himself issued his own statement in the afternoon.

This time, so far, there has been silence from the ANC. There has been silence too on other disturbing developments. On Monday the Cabinet confirmed that Zuma would now chair a new ministerial committee co-ordinating strategy for State-Owned Entities. This looks to many like a way around the Treasury’s grip on these organisations’ finances. And a way for SAA and Denel to do what they like, to the benefit of people like the Gupta family.

On Wednesday, in the midst of the fracas around Gordhan, it emerged, through the dogged work of News 24, that Transport Minister Dipuo Peters has ordered the Passenger Rail Agency of SA to stop its investigation into a series of massive contracts signed by former CEO Lucky Montana. This is the man who also spent billions on diesel locomotives that were too tall for our railway tracks. Her reason, we are told, is that the investigation was not budgeted for. A reason that carries about as much weight as Zuma’s apology for his conduct over Nkandla.

And despite this nonsensical justification, the ANC remains silent. It appears to have lost its role as self-proclaimed “leader of society”; it is as impotent as the DA once was.

But what is also happening is different parts of the ANC are reacting to this new reality in different ways. The national ANC is saying nothing, the Gauteng ANC appears to be whispering to itself in the corner. This is understandable, it has suffered more than other ANC provinces. But if ever there was a time when its voice of reform was needed, it is now.

Then we have events within the ANC itself. The ANC Youth League has said it wants the party to hold its elective conference early, but that it must be an uncontested conference, and that Zuma’s reign must not end early. But not Mantashe’s, his must end now. Mantashe believes that an early conference is “not a bad idea”, but that the party needs a new direction, and that could mean new leadership. Meanwhile, the SACP believes it’s suspicious that Gordhan is being pursued now, so soon after the elections. While, in Inchanga, in KwaZulu-Natal, two SACP leaders have been killed, allegedly by members of the ANC.

And this is before we look at the situation in that province’s ANC, where supporters of ousted premier Senzo Mchunu are going to court to reverse the outcome of the entire KZN ANC provincial election.

Imagine, if you can, what would happen if next week everyone in the ANC, or delegates representing them, were to come together inside a big tent on a university campus somewhere.

At Polokwane in 2007, then ANC Chair Mosouia Lekota was shouted down by delegates from the Youth League. ANC then was divided only into two major groups; surely the situation today would be far more chaotic. Mantashe’s warning to Cosatu last year, that if it went into a Special Congress divided the entire federation could collapse on the conference floor, could suddenly apply to the ANC itself.

But there are also pockets of hope for the party. In the Nelson Mandela Bay Metro, the ANC tried to delay the election of Athol Trollip through a series of unsustainable objections that were not based on the law, or the rules of council. In a display of arrogance Sepp Blatter would have been proud of, Danny Jordaan was late for the meeting. In Tshwane, a similar strategy was adopted. But in Joburg, things were different. There, the new leader of the ANC in opposition, Parks Tau, was dignified and correct. He led his caucus through an incredibly emotional day in which the EFF tried to inflame passions, the ANC lost power and one of his councillors, someone he had known since the mid-1980s, died.

Then, in an interview with the Midday Report the next day, he pledged himself to be the leader of a “constructive opposition”, to do what he thinks is right for the city of Joburg. This could, he admitted, even see him voting to support the DA at times. He is surely aware that the fightback for the city begins now. He has to ensure that voters, who have generally shown they don’t like corruption, and support those who follow the rules, find him and his party attractive, they have to be a viable alternative, ready to take over should the DA/EFF non-coalition coalition descend into chaos.

It has been said before in this publication, but Joburg is becoming more and more important for the fortunes of the ANC. Should Tau be the first ANC leader to win back a city, to reverse the trend that people who vote for the DA once vote for the DA again, he surely would be in a good position to have a major impact on its future.

But the people who really matter in the ANC, the people who right now should be working to win back the trust of the voters, who should now be deleting every single image of “the dab” dance move from their Facebook accounts, are too busy elsewhere. And people like Tau will have to soldier on, almost alone. DM

Photo: Parks Tau, Executive Mayor of Johannesburg, speaks during the workshop ‘Learning from Leading Cities’ at the Annual Meeting 2014 of the World Economic Forum at the congress centre in Davos, January 23, 2014. (WORLD ECONOMIC FORUM/swiss-image.ch/Photo Jolanda Flubacher)