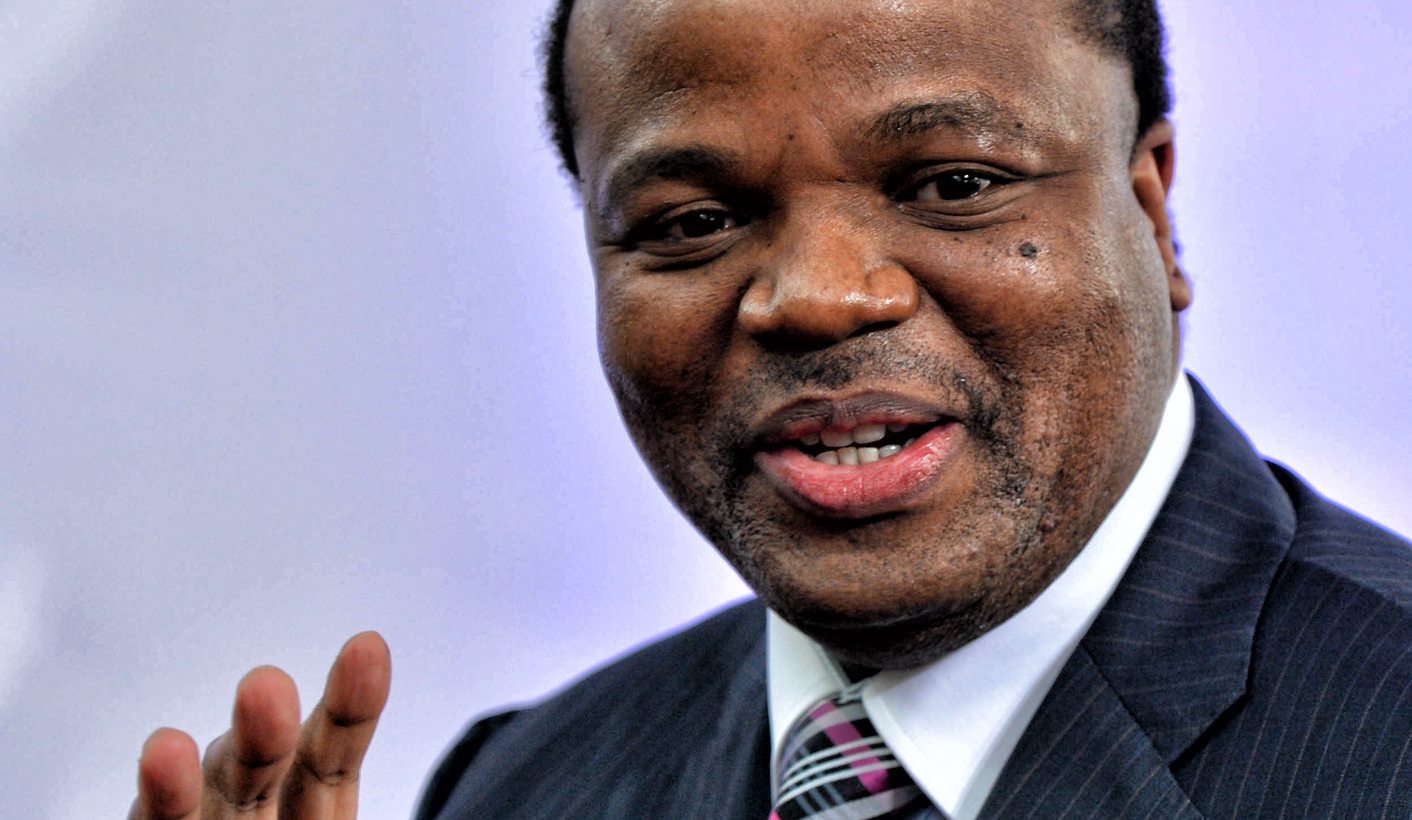 The leaders of southern African countries are getting together for a big chat. And if the official line is bought it’s a time of great pride for the host nation, the Kingdom of Swaziland. Local media and loyal royalists are bending over backwards to praise the king and his men for putting on the show. But underneath the jargon-riddled theme of the summit – too long and confusing to print – critics are lining up to tell a different truth: one of wasted money and people dying of starvation. By SIBUSISO NHLABATSI and BILL SNADDON.

The Southern African Development Community, a regional bloc of 15 countries, has converged on the little kingdom of Swaziland for the 36th SADC heads-of-state summit. The 10-day talkfest is a moment in the sun for Swazi leader King Mswati III, ruler of his landlocked nation since 1986.

This week, the 48-year-old monarch will be handed the SADC chairmanship, taking over from Botswana’s president Ian Khama.

Despite this rotational chairmanship being mostly ceremonial, many hold reservations about Mswati’s credentials in leading a regional organisation that ostensibly promotes democratic principles. It is not uncommon for people inside Swaziland, as well as outside observers, to label Mswati a dictator – although it must be said that many Swazis view their king as a god-like figure.

The Swazi people are excluded from political participation, despite Mswati proudly (and oddly) calling his kingdom a “monarchical democracy”. Forming political parties is banned and activists face jail if they speak out too loudly. In 2014, a journalist and a human rights lawyer were sent to jail for criticising the corrupt judiciary. They both emerged from prison 15 months later, stronger, and more convinced than ever that Swaziland is in dire need of reform.

Swaziland’s leaders are imposed on the people by the monarchy. Naturally enough, human rights are compromised and the media is muzzled. All legislative, executive and judicial powers vest in Mswati, who attended Sherborne School in Dorset, southwest England from 1983 until 1986 – when he was called home at the age of 16 to take the reins.

Mswati, soon after the crown was placed on his head, confirmed his dad’s decision by making an “amendment” to the proclamation, known as the King’s Proclamation Amendment Decree 1 of 1987.

“I hereby reaffirm that in terms of Swazi law and custom, the king holds the supreme power in the Kingdom of Swaziland and as such all executive, legislative and judicial powers vest in the king who may from time to time by decree delegate certain powers and functions as he may deem fit.”

The new constitution of 2005 hasn’t changed the situation, despite guaranteeing and claiming to protect fundamental human rights and freedoms.

Both the supreme court and the high court have legitimised Swaziland’s dictatorship. These institutions have interpreted the king to be above the constitution.

While this current constitution is, on paper, the “supreme law” of the land, and the king is obliged to uphold and defend it, in reality Mswati is supreme to the constitution. In short, the document was crafted in the spirit of Sobhuza’s 1973 proclamation, and Mswati’s so-called amendment of 1987.

For Mswati, who is clearly not subject to any local law, the thought of leading a regional body which is accountable to other heads of state must give him pause for thought – perhaps. And it should not go unnoticed that, according to 2015 research, only four out of the 15 SADC member states are considered to be “free”. Freedom House, a US-based rights advocate, considers South Africa, Botswana, Namibia and Mauritius to be free countries; the rest fall into “partly free” or “not free” categories.

What’s more, Zimbabwe’s leader Robert Mugabe is a well respected elder statement among most of the SADC leaders. Time will tell how the Swazi king – who is one of those who looks up to Mugabe – handles his new job. The jolly king now has much on his plate, including the pressing problems in his own back yard. It was reported in July 2016 that people were dying of starvation; not something traditionally associated with Swaziland.

“We have started burying people who are dying of hunger,” said James Simelane, a member of parliament for the Sandleni constituency in the southwest Shiselweni region.

“It’s just that each time a community member dies, there is always a disease that is associated with the death when in fact the disease itself has been accelerated by the hunger.”

Meanwhile, it’s been estimated that Swaziland will spend R16-million (almost $2-million) on this week’s summit. The Nation magazine, Swaziland’s only independent media voice, published some stinging advice for Mswati and the SADC.

“Under the leadership of King Mswati III,” writes Thembinkosi Dlamini, “the SADC should be allowed to collapse because for many years of its existence, it has failed to delivered on its promise of development and economic growth, poverty alleviation, enhancing the standard of and improving the quality of life of the peoples of the region.”

Dlamini continues: “I imagine, however, that for the 36th time, as citizens of the region, we are about to be lied to, sold out and in effect raped and robbed as yet another talk shop unfolds at [sic] our own back yard.”

While apartheid in South Africa ended more than two decades ago, in neighbouring Swaziland it appears that the people are still subjugated, but to a different type of master. The system of “monarchial government” separates and discriminates people by blood, in order to promote royal hegemony. Is this a Swazi form of apartheid?

Last and by no means least, Swaziland’s civil society needs to wake up from its slumber and smell the coffee. They should use this SADC talkfest to draw greater international attention to Swaziland’s horrid human rights record and crumbling economy. The monarchy is tearing the country apart, and by the time civil society wakes up there will be no Swaziland. There stands a dictator. DM

Photo: The King of Kingdom of Swaziland, Mswati III arrives at the fourth EU-Africa Summit of Heads of States at the European council headquarters in Brussels, Belgium, 02 April 2014. EPA/STEPHANIE LECOCQ

Sibusiso Nhlabatsi is a Swazi human rights lawyer and a 2016 member of the Young African Leaders Initiative (YALI). US President Barack Obama launched YALI in 2010 to support the next generation of African leaders.

Bill Snaddon is an Australian freelance journalist and filmmaker. He lived in Swaziland from 2012-15, when working at the Media Institute of Southern Africa.