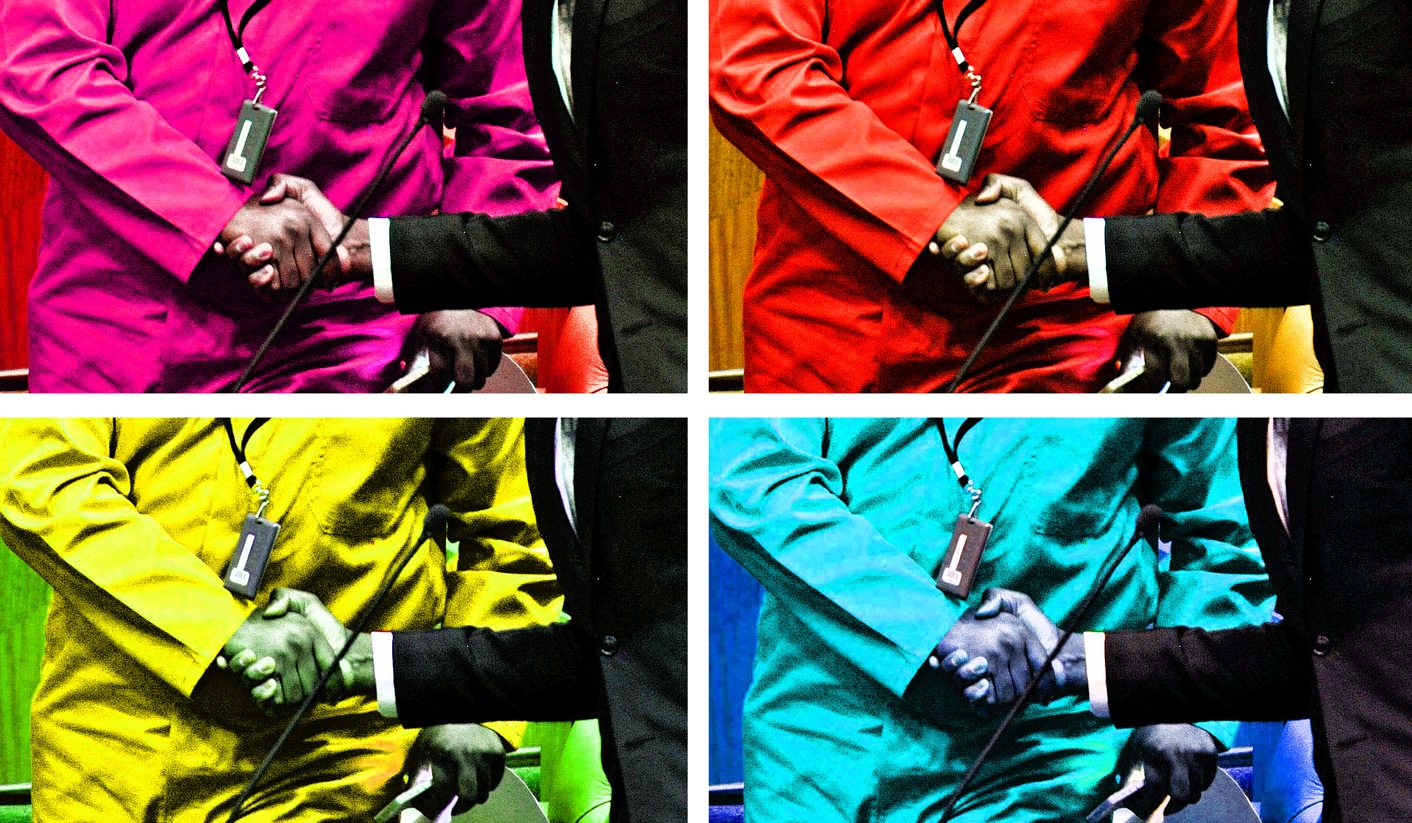 So, it’s official. As official as non-coalition coalition politics gets. The EFF will back DA candidates in the Gauteng metros, the ANC will be out of power in the big cities, and Julius Malema can carry on being the centre of attention. The EFF’s decision to back opposition candidates but not form formal coalitions with them is, in one sense, the perfect calibrated response to a difficult situation, and in another, a recipe for loads of disruption in the longer term. But all that matters to opposition parties is keeping the ANC out so they can now manoeuvre among themselves. By STEPHEN GROOTES.

The first inkling that something was on the cards between the EFF and the DA was the strange timing of their press conferences. Much was made on Twitter, and elsewhere, about the fact that Malema decided to use Alexandra, while the DA went to a swanky hotel in Sandton. But that overlooked the main aim, which was to get journalists to go to both press conferences – 14:30 is a strange time to start a press conference, but it was just enough time for a hard-working hack (that is, all of them) to see Malema, file quickly, and make it back to Sandton in time for Maimane. This is the kind of timing that must have been co-ordinated between the parties.

But it did also have the effect of giving the initiative, the main news of the day if you like, to Malema. What we needed to know was what was going to happen, and he was the person who first explained it; the EFF would vote for the IFP in KZN, and the DA in the Gauteng metros and Nelson Mandela Bay.

In a way, this put a little bit of pressure on Mmusi Maimane. His problem was that he both needed to look grateful for the support, while not also looking beholden to someone who is his major competitor. To add to the difficulty of the situation was the fact that this press conferences was with the leaders of other political parties. The UDM, the ACDP, the Freedom Front Plus and, lest we forget, Cope, were also there. It is not easy, as the leader of a party leading a coalition, to appear in public with the leaders of the other parties. You need to look both bigger and better than them, while at the same time not doing anything to ruffle their feathers.

It is a mark of how quickly Maimane has grown as a politician that he achieved this. But it also shows how he has stamped his authority on his own party. For many TV viewers, he would have been the only person at that table who they would have known by sight – something that would absolutely work to his advantage. And when someone either forgot, or simply didn’t introduce everyone from the other parties, well, that probably helped him too.

He started, of course, with some fine oratory. You know the stuff, the words about how these elections are the start of a change to our politics, how important coalitions are, the kind of thing a person in his position is obligated to say when the cameras are rolling and the icon “live” is flashing across three separate TV channels (ANN7 did not take the EFF press conference live, whether for political reasons or for the safety of their employees, is not known at this point).

Eventually, Maimane got to what we hoped would be the nuts and bolts:

“We have entered into an agreement to form governments with….”

He then named all the parties, and pointed out that Bantu Holomisa was stuck in traffic. Then came the pitch:

“This agreement has had to be set nationally… We must bring forward public transit systems… this agreement puts the people of South Africa first.”

It was all very well and good, okay, we have a story, but what on earth does it mean in the big metros? One rude and aggressive hack, forced to make an unbearably long trek from Sandton central to Sandton central to cover the conference (Rude and aggressive, I can’t imagine who you mean…. – Ed.), then asked, bluntly, what does that actually mean for the metros, and, “Mr Maimane, I’d like you to actually say it, who will be the mayors of the metros, and what’s happening in Joburg.”

Maimane paused slightly, and appeared – appeared at least – to pick his words carefully.

So far, so clear. Even a hack can follow that.

But Joburg is the problem. Malema had said earlier that there was “one small condition” around Joburg that they were still discussing. He didn’t name it. The fact that Maimane then explained that there was an issue around their choice of Herman Mashaba for Joburg Mayor was the problem was more evidence of the co-ordinated nature of Wednesday’s events.

It is, of course, no surprise that Malema and Mashaba would have problems. The man in red simply doesn’t believe that Mashaba is “black like me”. Rather, as he put it in an interview with 702’s Xolani Gwala, he believes that Mashaba “hates his blackness and he has huge disrespect for poor people… he wants to be more white than white people themselves.”

Those may be strong words, but then, when are words from Malema not strong? And surely, surely, his animosity towards Mashaba is nothing compared to his hatred for the ANC?

Photo: DA leader Mmusi Maimane holds an agreement between his party and smaller opposition parties entering into a coalition after the 2016 local government elections. (Greg Nicolson)

In the end, the battle for Gauteng in 2019 really centres on Joburg now. It is the biggest metro, with the biggest budget, the biggest source of voters, the largest source of that which politicians crave – power itself. Malema has already shown signs of backtracking, saying in that same interview that if Mashaba is mayor “so be it, but we do not want to see the ANC in power”.

Maimane has a different political problem here. As leader of the DA, he is actually the main man in all of this, not the EFF. And he must not look at all like he is dancing to the EFF’s tune; it would look very weak to simply chuck Mashaba under the bus. He spoke about the DA’s processes, and explained how they had selected mayors, and that this was the person who they had asked Joburg to vote for, and this is how Joburg had voted. Lovely stuff, but still, most people likely voted DA or EFF because of their antipathy towards President Jacob Zuma.

And the DA and Mashaba actually do have room to move here. When Mashaba got into the game, his stated aim at the time was to dislodge the ANC. He could surely now say that his campaign has achieved that, and if him not being mayor is the price of attaining his goal, then ja well no fine. History would also remember him well, whether he stayed in politics or not. And, as questioning on this issue grew heated in the DA’s press conference, that experienced operator, UDM leader Bantu Holomisa intervened, saying that there was plenty of time to come to some solution.

All in all, it seems now almost certain, barring some major intervention by the ANC, that the DA will now appoint/elect/coronate the next mayors of Tshwane and Nelson Mandela Bay. It seems also likely, on balance, that the person who runs Joburg will be from the DA. The maths in Joburg is slightly complicated, but the fact that the IFP, which could play a significant role in Joburg, is part of the DA’s coalition, surely seals the calculations. It is not 100% crystal clear that Mashaba will be that person. That decision will probably come down to, not what he would like to do, but whether the DA can afford to look like it’s being pushed around by Malema, or whether Malema will withdraw his condition.

In the meantime, what of the ANC? Gwede Mantashe did an interview on 702 on Wednesday afternoon. In that interview he said virtually nothing of political significance.

Proof that this Wednesday the ANC was not where the action is. DM

Murray Hunter for amaBhungane • 9 hours ago