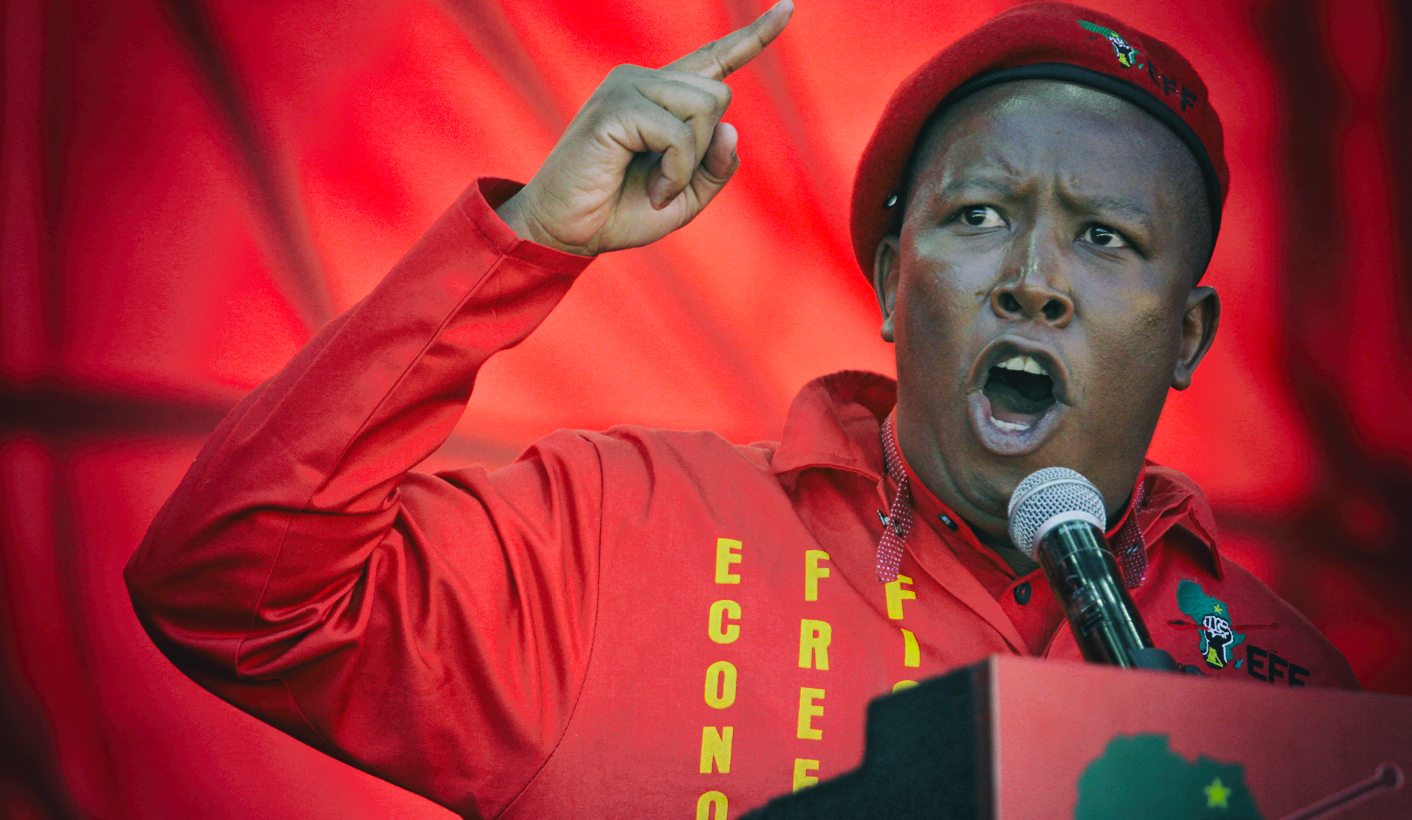 The Economic Freedom Fighters (EFF) will on Wednesday finally announce the role it intends to play in local government following intense negotiations over possible coalitions. With both the African National Congress (ANC) and Democratic Alliance (DA) unable to secure the EFF’s support for coalition governments in the hung metros, negotiations were still underway with smaller parties on Tuesday on the formation of minority councils. The new councils will now be in uncharted territory with posts, policies and budgets all up for debate and no majority to push these through. Continued turbulence at national level could also impact on the functioning of municipalities. By RANJENI MUNUSAMY.

The EFF showed their hand on Tuesday when their councillors in the Randfontein/Westonaria municipality abstained from voting for the positions of speaker and mayor, both of which went to the ANC as the largest party in the council. With the ANC winning 52.66% in the council, it had enough votes to elect the speaker and mayor. The DA received 26.83% and the EFF 11.93% of the votes. The EFF did not vote with either the ANC or the DA.

The EFF has been keeping its cards close to its chest as it held talks with the ANC, the DA and smaller opposition parties on possible coalitions in hung municipalities, particularly the four metro councils where no party received over 50%.

On Monday night, the EFF central command held a meeting to finally decide its position and the majority of members leaned towards the party abstaining from supporting either the ANC or the DA. This was also the position of most senior members of the EFF even before they began talks with other parties. Many EFF leaders appear to be worried that their constituency would misinterpret participation in a coalition as a merger with one of the big parties, or endorsement of the other party’s leadership or policies. The EFF is determined to keep its identity distinct and does not want to play second fiddle to any other party.

While the ANC believed it was closer to the EFF in terms of its policy positions, the DA believed that they shared a common goal to dislodge the ANC’s dominance. But despite several attempts to court the EFF, neither party could convince Julius Malema and his fellow fighters to enter into a coalition arrangement across municipalities. The line the EFF is expected to take is that the electorate did not give them sufficient votes to govern and therefore they did not want to secure posts through back-door deals.

On the face of it, the EFF deciding to withhold co-operation with the two major parties ensures a fair outcome as whoever won the largest number of votes in the hung metros now gets to choose the mayor and speaker. It is likely that the DA would now run Tshwane and Nelson Mandela Bay and the ANC would retain control of Johannesburg and Ekurhuleni.

The reality of course is never that simple. Smaller parties that were waiting for the EFF to play its cards now have to decide whether they also abstain or decide to throw in their lot with the ANC or DA. The EFF was part of a grouping of parties along with the United Democratic Movement (UDM), Congress of the People (Cope) and United Front that developed a guide for negotiations with the ANC and DA. Part of the list of demands was the removal of President Jacob Zuma from his position, scrapping of e-tolls, reforms to the electoral system and suspension of the nuclear deal.

The guide was released publicly by UDM leader Bantu Holomisa but the EFF did not confirm that this was also their list of demands. On Tuesday night, the DA was still consulting with the UDM, Freedom Front Plus, African Christian Democratic Party and Cope.

But it is not only votes for their mayoral and speaker candidates that the major parties need from other parties. There would need to be a quorum of 50% of councillors present in each of the hung councils so that a speaker and mayor can be elected. So ensuring that elected councillors from all the parties attend the first sitting is the first hurdle. Parties can nominate their candidates for the speaker and mayor positions and whoever receives the most votes would be elected (they do not need 50% of the vote to be elected). The EFF will clarify on Wednesday whether they will emulate what they did in Randfontein/Westonaria – attend but abstain from voting – in all the hung councils where they have seats.

Political commentator Ebrahim Fakir said the coalition negotiations had been to form private deals between the parties ahead of the council sittings so that people could be voted into positions. But agreements could change at any time and with the formation of minority councils, there would be situational alliances from issue to issue. In order to ensure functionality of the councils, there could be loose arrangements and trade-offs between parties to co-operate on issues or to pass budgets, Fakir said.

In a coalition government, the parties would have been bound into co-operating, usually because the minority party/parties would be given representation, either in the mayoral committee or senior official posts. However, in a minority council, every single issue would have to be debated and possibly put to the vote. If relations between parties are acrimonious, this could render the councils dysfunctional. Parties could also agree on alliances down the line, for example to pass a vote of no confidence in the mayor and elect a new one.

The EFF was expected to be the kingmaker in the metros, and could have caused a major shake-up in South African politics had it decided to work with the DA. It could also have helped the ANC retain control of the metros by extracting policy and budgetary concessions. The EFF leadership will announce at noon on Wednesday why they opted for neither and the role the party will now play in the councils.

The DA will also announce its position on the outcome of negotiations on Wednesday afternoon. The ANC said at a media briefing on Sunday night following a national executive committee meeting that it was still in talks. The party is expected to announce its way forward after the EFF and DA clarify their positions. Holomisa said the minority parties were looking forward to Wednesday’s announcements and wanted the “big shots” to make their positions clear before they declared where they stood.

Council sittings will have to be convened by the end of the week to meet the 14-day deadline since the announcement of the election results on 6 August. However, it is believed that the Johannesburg council will only be able to meet on Monday when the city council chamber will be available. While the formation of the councils will finally bring certainty after fiercely fought elections and coalition negotiations, this will by no means be a return to normality.

The ebb and flow of politics will not only affect relations at national level but could cause further turbulence in the councils. The EFF and ANC have been at each other’s throats in the National Assembly since the 2014 elections. The EFF has also had periods of acrimony with the DA and other opposition parties. With the ANC and DA requiring the EFF’s co-operation on an ongoing basis in the minority councils they lead, this could be used as leverage. Throwing EFF MPs out of the National Assembly might therefore not be a good idea when Johannesburg’s R54.8 billion budget hangs in the balance.

And so we enter the veritable no-man’s land in politics, where nothing is truly certain and situations can change in a heartbeat, with repercussions throughout the layers of government. In years to come, the 2016 local government elections will be seen as the point where South Africa changed course. DM