Sudan needs a hero – but is Thabo Mbeki really it?

Sudan needs a hero – but is Thabo Mbeki really it? 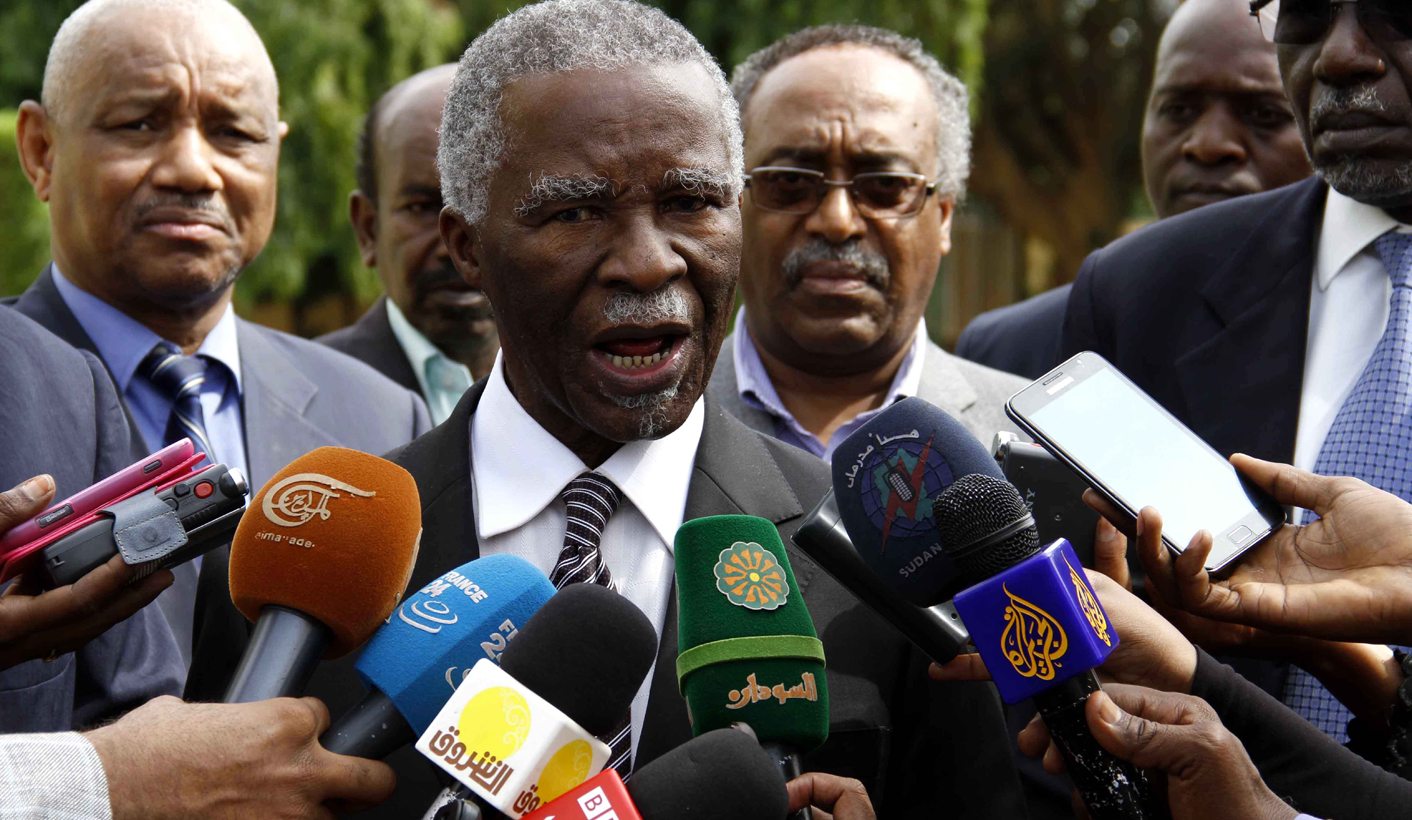 The ongoing civil war in Sudan proper has been largely ignored, with attention focused on the chaos in South Sudan instead. But as world media and the international community turn a blind eye, at least one person is paying attention: Thabo Mbeki. The former South African president is enthusiastically leading the mediation process between Khartoum and rebel groups, even though he’s got some serious trust issues. By SIMON ALLISON.

When South Sudan became independent in 2011, everyone was too busy celebrating the birth of the world’s newest country to remember that across that border, in what remained of Sudan, the civil war still raged, and people were still dying in Darfur, in Blue Nile, and in South Kordofan.

And then, as South Sudan disintegrated in spectacular fashion, the excesses and brutality of its own civil war once again overshadowed the fighting up north. Khartoum’s government, led by wanted war criminal Omar al-Bashir, could drop their barrel bombs and mortar shells on towns and villages without anyone seeming to notice, or care.

Thousands of civilians have been killed or maimed, and hundreds of thousands forced into makeshift refugee camps to eke out a makeshift existence. The rest of the population is on the brink of starvation, their crops stunted by poor rains and the relentless aerial bombardment.

Their situation remains dire. The food is running out, the politics are intractable, and the bombs keep on coming. They need a hero – and Thabo Mbeki does not need to be asked twice.

The former South African president has long been involved in Sudanese politics. He was a lead mediator in the negotiations that led to South Sudan’s independence, and is also head of the African Union’s high-level implementation panel on Darfur, created to implement the recommendations of a report written by none other than Mbeki himself. He has also thrown himself enthusiastically into the South Kordofan and Blue Nile fray, attempting to get the various parties to sign his AU-endorsed road map to peace.

The road map is not, strictly speaking, a peace deal. It’s more a collection of agreements that, if implemented, may ultimately lead to a real peace deal. These agreements include the participation of all sides in a “national dialogue”; the provision of humanitarian assistance to affected areas, and pledges to hold more talks to discuss a ceasefire.

Khartoum was first to sign, but opposition groups were reluctant. They thought the terms were too favourable to the government (an argument supported by Khartoum’s unusual enthusiasm for the process). They eventually relented, signing the document last week under the banner of the Sudan Call movement. Their reasoning: to expose the Bashir regime’s bad faith, when it inevitably fails to implement the agreements.

It didn’t take long for Khartoum to prove the opposition right. According to Ibrahim, a furious Mbeki cancelled further talks planned for Monday after Khartoum decided to play hardball on the subject of humanitarian access – demanding that all humanitarian aid be directed through Khartoum, rather than independent agencies. This would allow Khartoum to control where the aid goes, and to gather valuable intelligence on rebel-held areas.

Before it has even really begun, Mbeki’s road map appears to be falling apart.

Seasoned Sudan-watchers are not surprised. It’s not just Bashir’s bad faith or the lack of unity in opposition ranks that means the road map was doomed from the start. It’s also that Mbeki himself is no longer a trusted, impartial mediator. He’s been around too long, and made too many concessions, and the rebel groups just don’t trust him any longer.

“Mbeki is deeply distrusted by all non-regime parties in opposition. Over the past eight years of relentless failure, Mbeki has supported the regime in far too many instances and is no longer considered an impartial mediator… Mbeki simply cannot any longer carry the title of ‘mediator’ with any credibility,” wrote Eric Reeves, a Sudan researcher and activist, on his blog.

“We feel that Thabo is very weak. Sometimes the mediators have to show the red eyes [courage], if one side is not showing their commitment. But Mbeki is a coward.”

The criticism is unlikely to deter Mbeki. The former president is nothing if not stubborn – after all, he is still arguing that he was right on HIV/Aids – and he has already invested huge amounts of time and effort into Sudan. He won’t give up yet, and he will at the very least make sure that Sudan’s ongoing civil war remains an issue at the top table of African diplomacy.