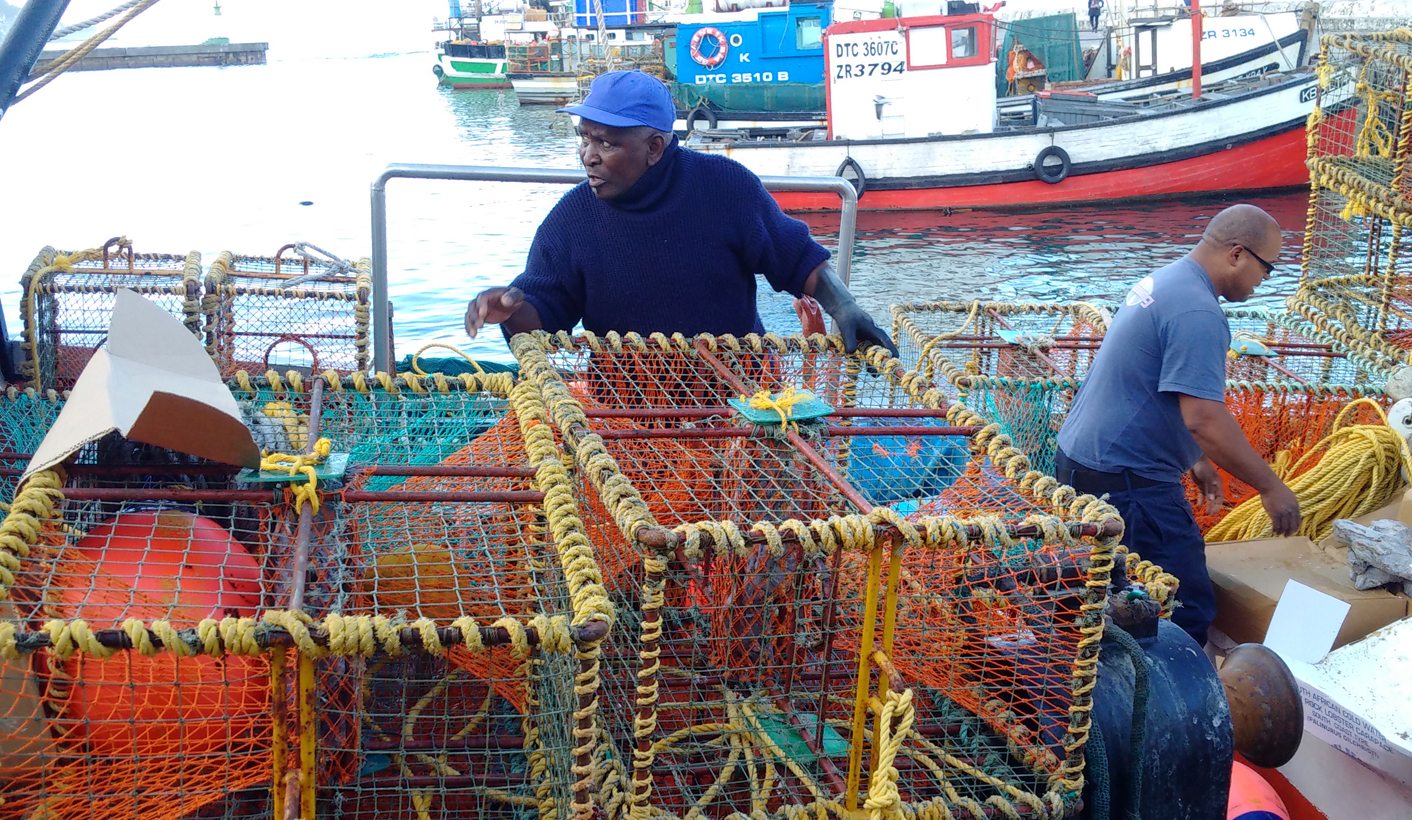 Fishers risk “limb and neck to get that fish and to put something on the table” – life for the small-scale fishers community is increasingly difficult despite the advances that have been made. But there are nascent initiatives to improve their lot. By Andrea Teagle for GROUNDUP and Chronicle.

Kalk Bay conjures images of bright fishing boats, seagulls and seals, the gentle slop-slop of clear water against the pier. You can see fish strung above the heads of hawkers, their silver scales glinting as the day’s catch changes hands. Behind this tranquil scene is the harsh daily reality of this traditional fishing community.

“People would say to us, ‘you get fish free in the sea!’,” Kalk Bay fish hawker and father Rafiek Isaacs says. “But what they don’t understand is that fisherman goes out, he risks limb and neck to get that fish and to put something on the table for his family… And he has the same expenses as anyone, anywhere.”

Isaac’s family has fished in Kalk Bay for generations. A mini-port in the late 1700s, the bay briefly became a whaling station (the whales were quickly hunted to extinction) before fishing properly took hold from around the 1850s, with the arrival of Filipino refugees and the settling of newly emancipated Cape slaves originally from Malaysia, Java and Batavia.

Kalk Bay had been a diverse fishing community for over a century when apartheid began. Policy protected white, commercial enterprises, and traditional fishermen were excluded from the top tiers of the industry that they had built.

When the ANC government came into power in 1994, one of its campaign promises was “the upliftment of impoverished coastal communities through improved access to marine resources”. The Marine Resources Allocation Act of 1998 introduced quotas for commercial fishermen, and made provision for subsistence fishers. Falling somewhere between those two categories, South Africa’s traditional fishermen slipped through the cracks.

Says Dr Serge Raemaekers, a small-scale fisheries researcher from the University of Cape Town, “In Kalk Bay, many fishers there in 2002-2003 got line fish rights [but] commercial rights … only a small number of people got those. In fact, most people who got those weren’t necessarily small-scale fishers. In Kalk Bay the chukkies [small fishing boats] guys were quite lucky.”

Some managed to meet the criteria and received permits.

But the permits have an expiry date, and in 2013, fishers had to reapply. This time round, the Kalk Bay traditional fisheries took a blow: Fisheries management cut the number of licences from 450 to 215, leaving many small-scale fishers without jobs. The fishers came together to challenge the allocation process, which has since been overturned.

Rafiek Isaacs says that although more black and coloured boat owners have rights than in the past, getting permits is still near impossible for some.

“There’s certain criteria that you have to meet, and as you know it, for a man that doesn’t even have a R10 or a R5 to feed his family, how’s he going to get a boat, how’s he gonna …?”

In 2012, the Small Scale Fisheries Bill was passed, acknowledging the continued marginalisation of traditional fishermen, and making provisions to grant licences collectively to small fishing communities. The idea is for fishers to organise themselves into co-operatives and apply for a “fishing basket” that they manage among themselves. But implementation is slow.

“The small-scale fishing policy is meant for every fisher who’s a traditional fisher who’s been fishing for generations, who’s been marginalised pre-apartheid, during apartheid, post-apartheid even through the fishers’ transformation process after that,” Raemaekers says. “While we may have a pretty good idea of who these people are, it still needs to be formalised by going through [an] identification and verification process.”

That’s where we are now. “I’d like to see the Kalk Bay fishers get together as a collective, form a co-operative and then apply for small-scale rights,” Raemaekers says. But it’s a system that people are unfamiliar with, and so the transition is a slow process.

Meanwhile, Isaacs say that life for the small-scale fishers community is increasingly difficult. The fisherman points to a number of factors, including the worsening weather patterns and declining snoek populations due to large commercial trawlers.

This suggestion is part of what a recent initiative called Abalobi is aiming to do. Abalobi is a mobile app that enables fishers to log and share information, give them a space at the decision-making table by compiling a more accurate knowledge base of local fisheries, and empower traditional fishers in the value chain. “It’s not necessarily just about exporting,” Raemaekers, who is part of the team, says. “It’s about local markets as well.”

“As these co-operatives get formalised, we’re offering these groups of fishers opportunities to think about value chain upgrading, rather than sell their catch through some distributor… What about through their co-operatives developing relationships with restaurants, with consumers, with retailers so they can not only potentially get a better price but they can tell their story, and develop their small-scale brand.” DM

This article was produced for GroundUp by Chronicle.