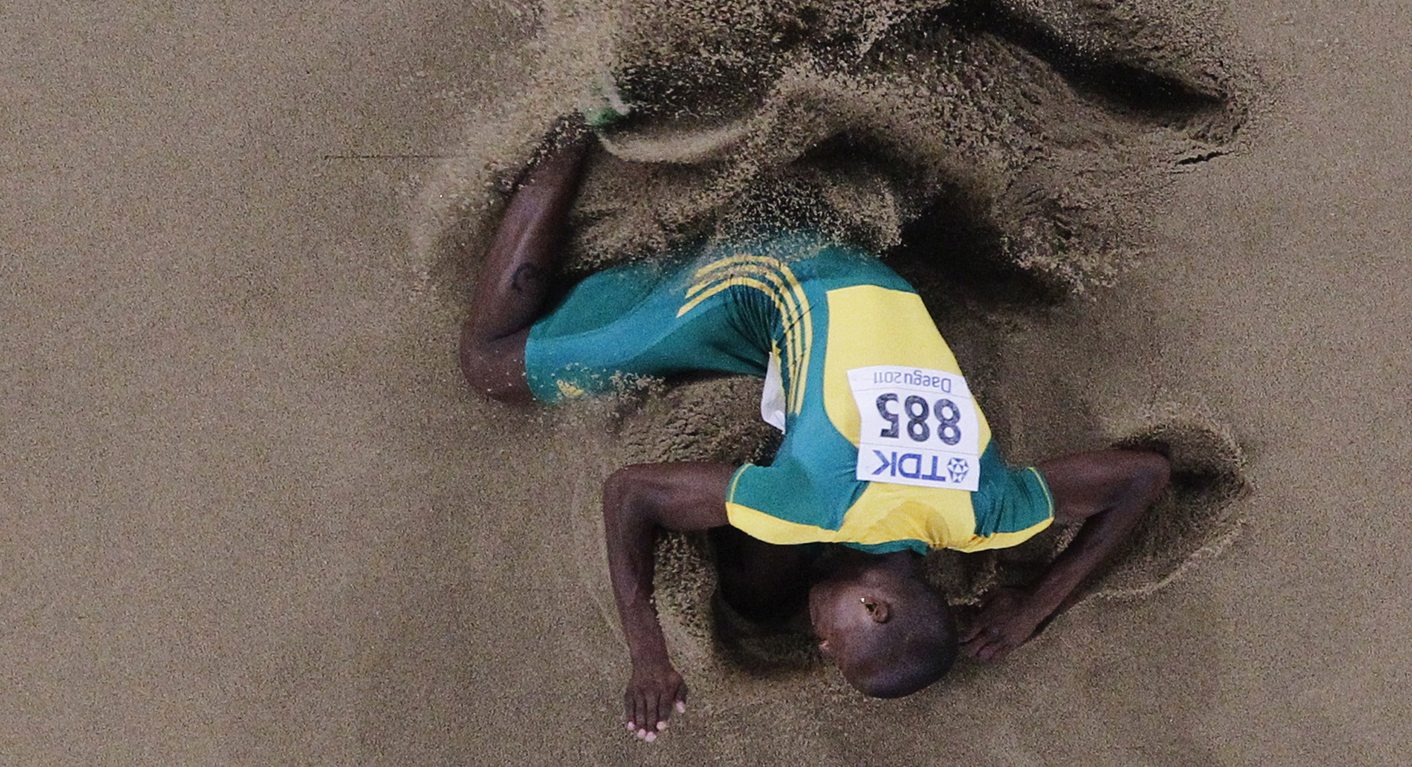 Luvo Manyonga became an Olympic medalist on Saturday night. Just two years ago, some would not believe that he would still be alive today. BY ANTOINETTE MULLER

If you had asked Luvo Manyonga’s friends and family two years ago where they saw the now 25-year-old in 2016, some might have replied: “dead.”

On Saturday night, the prodigal son lived up to the potential he had shown during his junior career. On the biggest stage in the world, it was the biggest performance of his life. And if this was anything to go by, the best is yet to come.

In the hotly contested final, Manyonga held his nerve to recover from two no jumps in the first round, to leap into the lead and eventually silver medal place. His first jump of the night was decent, but it was followed by two no-jumps. Somehow, his first attempt was enough to progress and by his fifth attempt, Manyonga had leapt into the lead with a distance of 8.37m, a personal best. His sixth attempt was another no jump. He could only watch as the United States’ Jeff Henderson overtook him with by just one centimetre. This rollercoaster of emotion is something he had seen before. But the silver medal at the Olympics is something he might never have imagined.

Four years ago, Manyonga’s life was in near ruins. He has said that he was ten or maybe even five percent away from death. He was on regular dates with the devil in the shape of a lightbulb and white crystals. The devil’s name was meth.

Having emerged as a young star during the 2010 IAAF Junior World Championships, where he won a gold medal, the gifted athlete has overcome addiction to represent his country at the Rio Olympics.

Like so many other inspirational stories, his begins in an obscure township which nobody would have heard of or cared about had an athlete of his stature not emerged from there. Mbekweni is a growing township on the outskirts of Paarl which cuts a stark contrast to the opulence of the Boland town known for producing some of South Africa’s rugby greats.

In Mbekweni, it doesn’t matter who you are or what you have achieved. The drugs, the and the violence do not discriminate. It will chew you up and spit you out and never shed a tear for what could have been. A few years ago, Manyonga was on the verge of becoming another far-too-common statistic of this cycle of life.

Fortunately for him, there are still a few good people in South African sport, but the journey to here has not been easy.

The long jumper was first spotted by coach Mario Smith around 2009. Smith had reportedly described Manyonga’s technique as “ technique I have ever seen”. That perfect technique would win him gold at the junior championships a year later, but that gift would also become his curse.

As Manyonga started winning – and the money started rolling in – so his life started to unravel. His rewards only added more pressure on the burgeoning star. Friends and family relied on him financially to the point where Smith started to support Manyonga’s family at his own expense. All Smith wanted was for Manyonga to do what he was born to do: jump.

But the reality of places like Mbekweni is that it will snuff out every light as soon as it starts to shine. By 2012, Manyonga had tested positive for and was banned for 18 months. As ever, Smith, his father figure, was fighting his corner. Smith stood by his athlete, arguing for a reduced sanction saying that: “mitigating factors, Manyonga’s poor family situation, use of the drug for non-enhancing reasons and lack of education on doping matters,” all played a part.

The ban was set at 18 months, slightly reduced from the standard two-year exclusion. It would be a long road back from here and the 25-year old very nearly didn’t get on that path.

By 2014, Manyonga’s relationship with Smith became frayed and the drug – or the devil as the athlete now calls –had him in a vice grip. In 2014, his mentor and coach died in a car accident. An interview with the athlete in the Mail & Guardian said that Smith died on his way to Manyonga’s house, en route to try and patch things up. Manyonga would never attend his coach’s memorial. He got high that day instead.

For what seemed the umpteenth time in his life, Manyonga was knocked down.

But while one dark force was trying to bury Manyonga’s talent, another was trying to make it shine. In that same year, the long jumper had started to work with John McGrath, an Irish and conditioning coach, as well as former Olympian Ryk Neethling. Both tell of the struggles of working with Manyonga while still trapped in the challenging circumstances in Mbekweni and while still fighting the crystal devil. Anyone in tune with just how wide-spread this drug’s problem has become in Cape Town will know just how difficult it can be to release anyone from its spell.

Manyonga is extremely lucky. But he also deserves immense credit. Breaking a deal with the lightbulb devil is not easy. Even if that deal promises a fresh start and a route of hell, it’s always easier to say you’ll take the first step tomorrow.

Eventually, Manyonga would take the first step. With Sascoc’s intervention, which saw him relocate to the country’s centre in Pretoria where his accommodation and training needs were covered, he started the journey to what must be one of the most incredible comebacks in South African sport.

In 2016, after a near absence, Manyonga returned to competition. In March, he cleared a world-leading and personal best distance of 8.30, on Saturday night, he went even better to clinch South Africa its sixth medal at the Rio Olympics.

Manyonga often describes jumping as “being in heaven”, somewhere away from this dark planet. Now, South Africans are in heaven with him. DM