Op-Ed: A National Minimum Wage for South Africa – the path to economic growth? 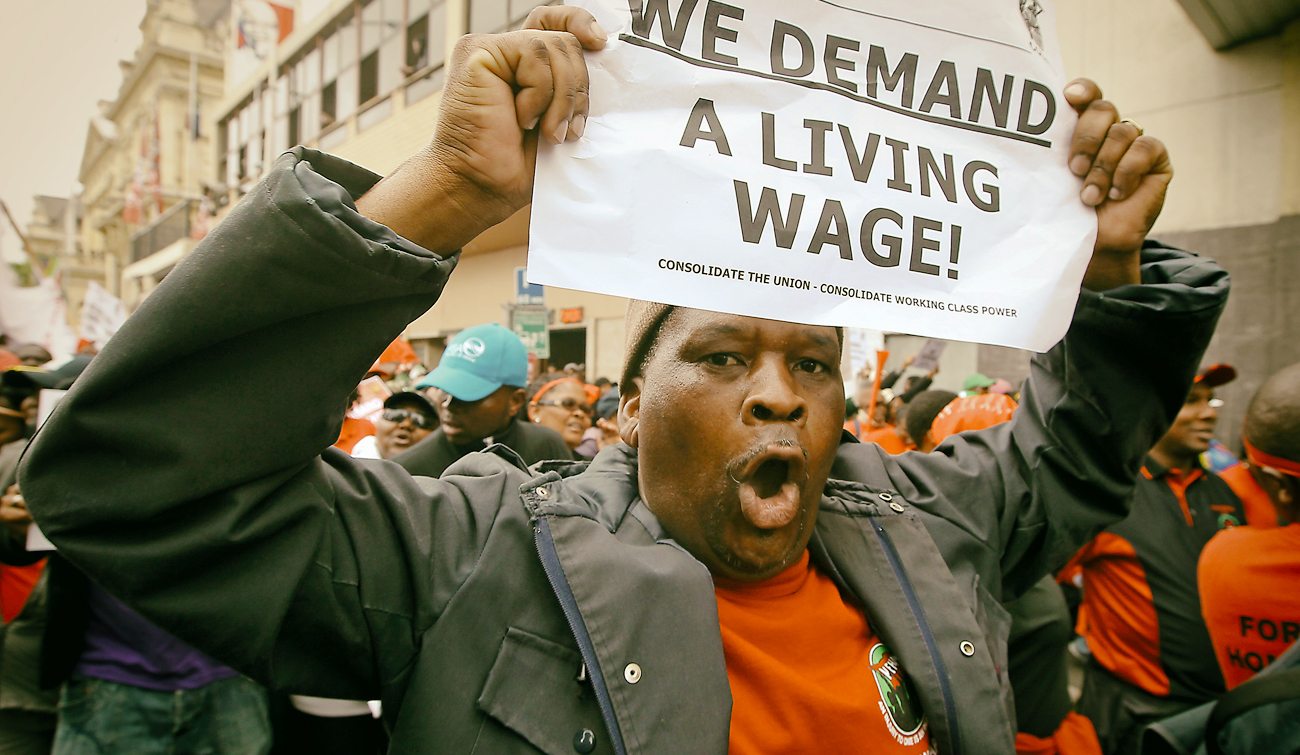 Research has spoken: A national minimum wage is likely to boost the economy, decrease poverty and deliver numerous benefits overall. By GILAD ISAACS.

A national minimum wage in South Africa, if set at an appropriate and meaningful level, can reduce working poverty and inequality and support economic growth. This is the findings of to a recent report by the National Minimum Wage Research Initiative at the University of the Witwatersrand.

By establishing a wage floor below which no employers are permitted to pay the employees covered, minimum wages are able to meet their central objectives as defined by the International Labour Organization of covering the basic needs of workers and their families.

South Africa has dire levels of working poverty: 54% of full-time employees — 5.5-million workers — earn below the working-poor line of R4,125 a month, and so cannot meet the most basic needs of themselves and their dependents. High dependency ratios mean wages in South Africa stretch to cover many dependents. Higher wages for low-wage workers would benefit both the employed and the unemployed.

Collective bargaining, covering approximately 32% of lower-wage workers, has managed to maintain wage levels but is unable on its own to combat working poverty. Sectoral determinations, with minimum wages set by the Minister of Labour, cover approximately 46% of lower-wage workers. Despite increases in these minima – of between 16% and 81% in real terms since their institution – many workers in these sectors still earn exceptionally low wages: 75% of agricultural workers earn below R2,600 a month and 90% of domestic workers below R3,120.

In South Africa, a national minimum wage is also being explored as a tool to reduce inequality, which is the highest in the world, and transform the inherited apartheid wage structure. In 2014, the average income of the top 10% of full-time employees was 82 times the average income of the bottom 10%. Inequality in South Africa is driven by wage differentials. There is a growing international consensus, led by the IMF, World Bank, and OECD, that inequality retards economic growth. Inequality also undermines social cohesion.

Minimum wages have been successful at raising wages for low-wage earners in developed and developing countries. In Latin America, a 10% increase in minimum wages led to an increase in average wages of between 1% and 6%, with low-wage workers benefiting disproportionately.

The resulting rise in household income would spur greater consumer spending and hence increased output and raised levels of growth, together with rising productivity. There is a growing body of literature that establishes the aggregate demand, productivity, and growth enhancing nature of minimum wages.

In the international literature, the aggregate effect on employment is marginally negative or neutral, and often statistically undetectable. In South Africa, minimum wages have been shown to have no significant impact on employment in five of the six sectors studied; agriculture is the exception.

Similarly, in the South African statistical modelling employment is projected to be up to 0.3% lower with the institution of a national minimum wage. This is because firms, and the economy, adjust to higher wages in multiple ways, chief amongst them being productivity increases, wage compression, cuts in profit margins, and small rises in prices.

The boost to aggregate demand from higher wages counteracts negative pressures on employment levels; while raising wages may place pressure on individual companies, it can benefit businesses overall.

The level at which the national minimum wage is set will strongly influence the manner in which firms and the economy adjust.

Rising minimum wages have reduced poverty in almost all developing countries studied; in Thailand and the Philippines, for example, a 1% increase in the minimum wage has been shown to reduce poverty by 0.5%. In South Africa, the poverty headcount is projected to fall by around 2%; the decline is greatest for black South Africans.

The South African statistical modelling also projects a fall in inequality in South Africa. Raising the coverage or level of minimum wages can also cause a shift in income from capital towards labour and this is also shown to be beneficial to the overall South African economy.

In middle-income countries minimum wages are on average set at 48% of the average wage; this equates to R4,161 (in April 2015 rands) in South Africa. In 2015, the weighted average minimum wage for private-sector bargaining councils was R4,355, and for public- and private-sector bargaining councils R5,747. In April 2015 a family of four required R5,276 to meet their most basic needs and not live in poverty; the working-poverty line was R4,125. Thus the relevant indicators cluster between R4,000 and R5,500.

The ILO also stresses the need to consider relevant economic factors. Our statistical modelling shows that a national minimum wage beginning at levels between R3,500 and R4,600 and reaching approximately R3,900 and R5,100 after five years has positive and sustainable effects.

The national minimum wage policy must be carefully designed and the wage set at a level that is able meaningfully to improve workers‘ livelihoods with sustainable ramifications for the wider economy. This is possible and a national minimum wage can, without significant negative economic consequences, help reduce poverty and inequality, while potentially boosting economic growth. A national minimum wage is a not a silver bullet and must be complemented by other policies, but it can play a part in building a more equitable and prosperous South Africa. DM

A version of this article was first published in the Sunday Times.

Elri Voigt for Spotlight • 20 hours ago