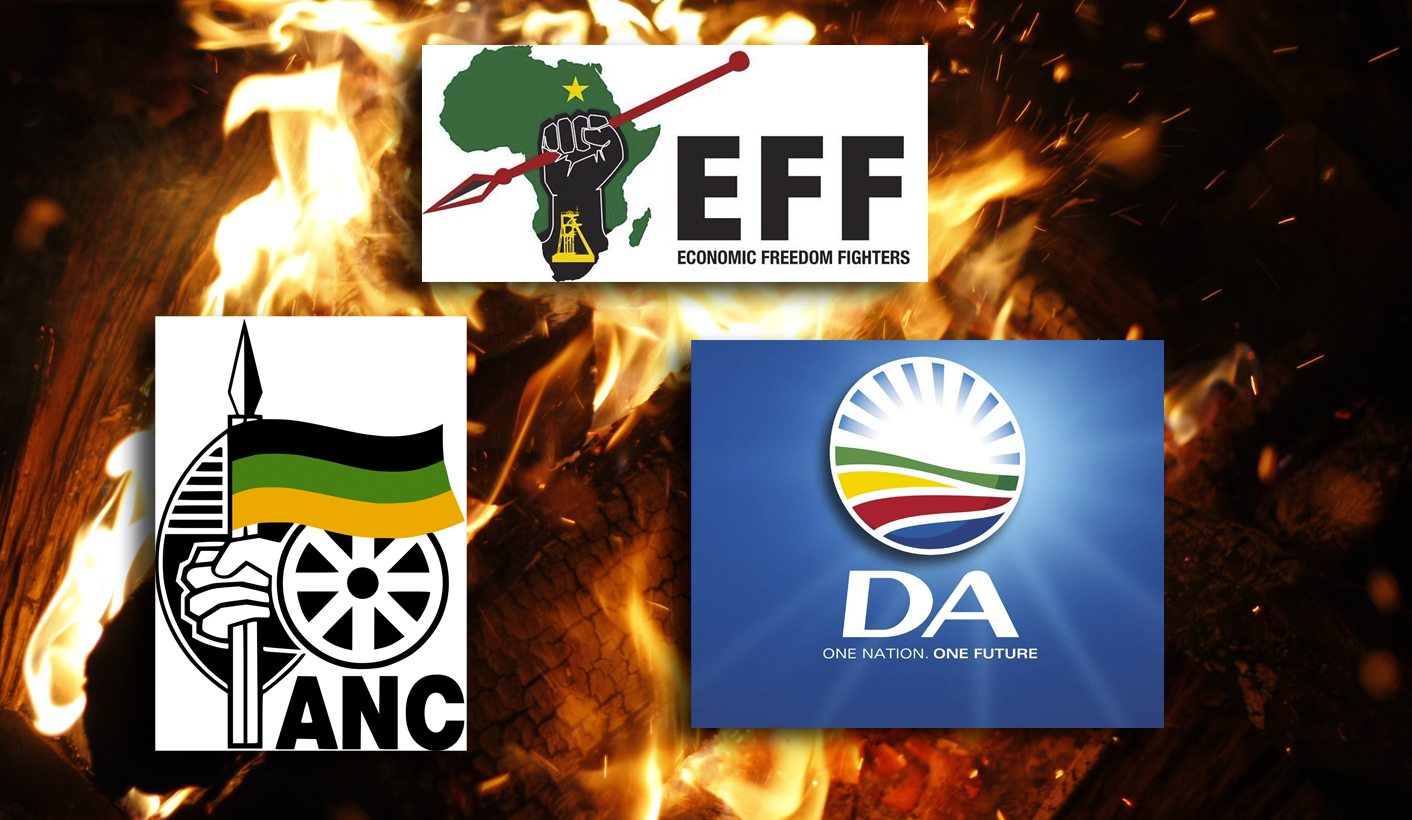 Talks between South Africa’s major political parties on coalitions have not yet yielded any breakthroughs. None of the political parties had anticipated that the 2016 local government elections would result in such a medley of outcomes, with no outright winner in four of the eight metros. It has been difficult to switch from aggressive campaign mode to negotiations mode, which naturally involves bargaining and compromise. Smaller parties appear to have big demands, including the “removal” of the president, which make for tricky negotiations. The situation requires political maturity and some out-of-the-box thinking. By RANJENI MUNUSAMY.

If there is anyone who knows how hard it is to serve in a coalition government it is President Jacob Zuma. The ANC was a minority partner in the KwaZulu-Natal government between 1994 and 1999, the first term of the democratic order. The Inkatha Freedom Party (IFP) won 10.5% of the vote nationally and just over 50% in KwaZulu-Natal in the first election. With the IFP serving in the Government of National Unity nationally, the ANC, which received 32% of the vote in KwaZulu-Natal, had three MECs serving in the provincial government. Zuma was one of the three ANC MECs who served under successive IFP premiers, Frank Mdlalose, Ben Ngubane and Lionel Mtshali.

The relationship between the ANC and IFP was extremely difficult at the time. Political violence was still raging in parts of KwaZulu-Natal, with people being killed throughout that period. The relationship in the cabinet and provincial legislature was tense, with hostilities between the parties always evident in heated debates and often resulting in stalemates. It was dangerous at the time for politicians to venture into the opposition strongholds.

Zuma, who was the ANC’s provincial leader, began peace talks with Reverend Celani Mthethwa of the IFP, and the two led a stop-start process to negotiate a peace agreement in KwaZulu-Natal. Throughout that period, it took political maturity and commitment to keep the provincial government functioning.

So if there is anyone who can provide guidance in the coalition talks now, it is the president – both from his experience of serving in such a government and negotiating a settlement with hostile parties. The ANC, Democratic Alliance (DA) and Economic Freedom Fighters (EFF) are ostensibly not at war, although the atmosphere on the election campaign trail made it feel that way.

But Zuma’s position is now compromised, with him being a contested issue in the talks rather than an elder who can provide wise counsel and direction. The ANC and DA are trying to court smaller parties into coalition agreements to establish governments in a number of hung municipalities. The EFF is the most sought-after partner as it will be able to tilt the scales in favour of the ANC or DA in four metros: Nelson Mandela Bay, Tshwane, Johannesburg and Ekurhuleni.

Daily Maverick understands that no firm demands have been put on the table as yet and the first rounds of talks between parties was to discuss principles and proposals for the way forward. Each of the 27 hung municipalities nationwide has different dynamics and personalities on the council lists. Therefore one agreement between two or more parties across the board is unlikely. The election results require that different formulas be agreed on, which means there can be different partnerships in each one or groups of municipalities.

For example, the EFF could partner with the DA in Nelson Mandela Bay and Tshwane, and partner with the ANC in Johannesburg and Ekurhuleni. Alternatively, the parties could agree on partnerships that keep the executive mayor system in some municipalities and opt for councils run by executive committees in others. If no coalition agreements are reached, which is a possibility if the minority parties’ demands are too high, the DA and ANC could opt to form minority governments. They would, however, have difficulty ensuring functionality of the councils without the support of other parties to adopt decisions and pass budgets.

A statement issued late on Tuesday night by the DA’s lead negotiator James Selfe dismissed “ANC-inspired rumours” that coalition agreements had been reached. He denied claims that “the DA was horse-trading metros”.

“These are the last kicks of a dying horse, desperate to cling on to power using misinformation,” Selfe said. “The DA will continue with its negotiations in earnest with the clear objective of putting together governments that give effect to the majority of the electorates’ rejection of the ANC and its management of local government.”

According to a Facebook post by United Democratic Movement leader Bantu Holomisa, a meeting between his party, the EFF, Congress of the People and United Front developed a guide for negotiations with the ANC and DA. He wrote a long list of issues to be put on the table which he said were of “immediate necessity”.

Among the service delivery demands are an end to e-tolls, “removal of the current Head of State who has been an embodiment of corruption”, finalisation of the proper naming of South Africa’s capital and “immediate suspension of the envisaged nuclear deal”. Holomisa said the parties are also calling for a review of the budget as well as constitutional reforms on land, property ownership, nationalisation and the electoral system.

None of the other parties has confirmed that this is their official list of demands. Most of these demands listed by the UDM leader are not applicable to the DA, which has no ability to remove the president, change the Constitution or rescind national legislation. The DA can only respond to demands relating to its policies and plans for the municipalities, as well as offer posts in power-sharing governments.

While the ANC has confirmed they are in negotiations, their negotiators face an uphill battle, even getting consensus within their party to engage on such a large assortment of demands. It is understood that the ANC is willing to make concessions on issues at local government level and barter over council positions such as mayor and members of executive committees, as well as senior official posts such as municipal manager and chief financial officer.

Broader policy changes might be difficult if these are in conflict with the ANC’s own policy positions. Only ANC national conferences can decide and determine policy, and therefore the powers of the ANC negotiators would be limited on demands such as nationalisation and property ownership.

There will be great difficulty selling any agreement internally that allows other parties to dictate the deployment of the ANC leadership. While Holomisa’s post puts Zuma’s removal on the list of demands, there have also been suggestions that Speaker Baleka Mbete should be removed as a compromise. Both these proposals would cause a rebellion in the ANC ranks if they were to be considered. Even if there were an acknowledgement that Zuma is a liability to the party, the ANC would never want to be seen to chop off its own leader’s head to please another party.

So far, all the parties say that any coalition agreements should be in the interests of the people of South Africa, particularly the poor. However, the negotiations process requires that they delve beyond the rhetoric and start talking specifics. The initial round of talks tested the waters – hard negotiations now lie ahead. The end result is unlikely to be a neat and tidy package.

But few things are simple in our country. Thanks to the elections, the winds of change are blowing, which should bring a much-needed shake-up and possible realignment in South African politics.

If coalition governments are agreed on, they will not be easy to manage as there will be constant pulling and pushing by the partners. We have had coalitions in the past that had to function through a period of violent conflict, but the spirit of compromise is now quite absent in our politics. All parties would now be required to adapt and co-operate if these agreements were to work.

Of course the possibility also exists that agreements will not be reached, which means we will be tossed about on choppy waters for the foreseeable future. Either way, assuming the brace position is advisable. DM