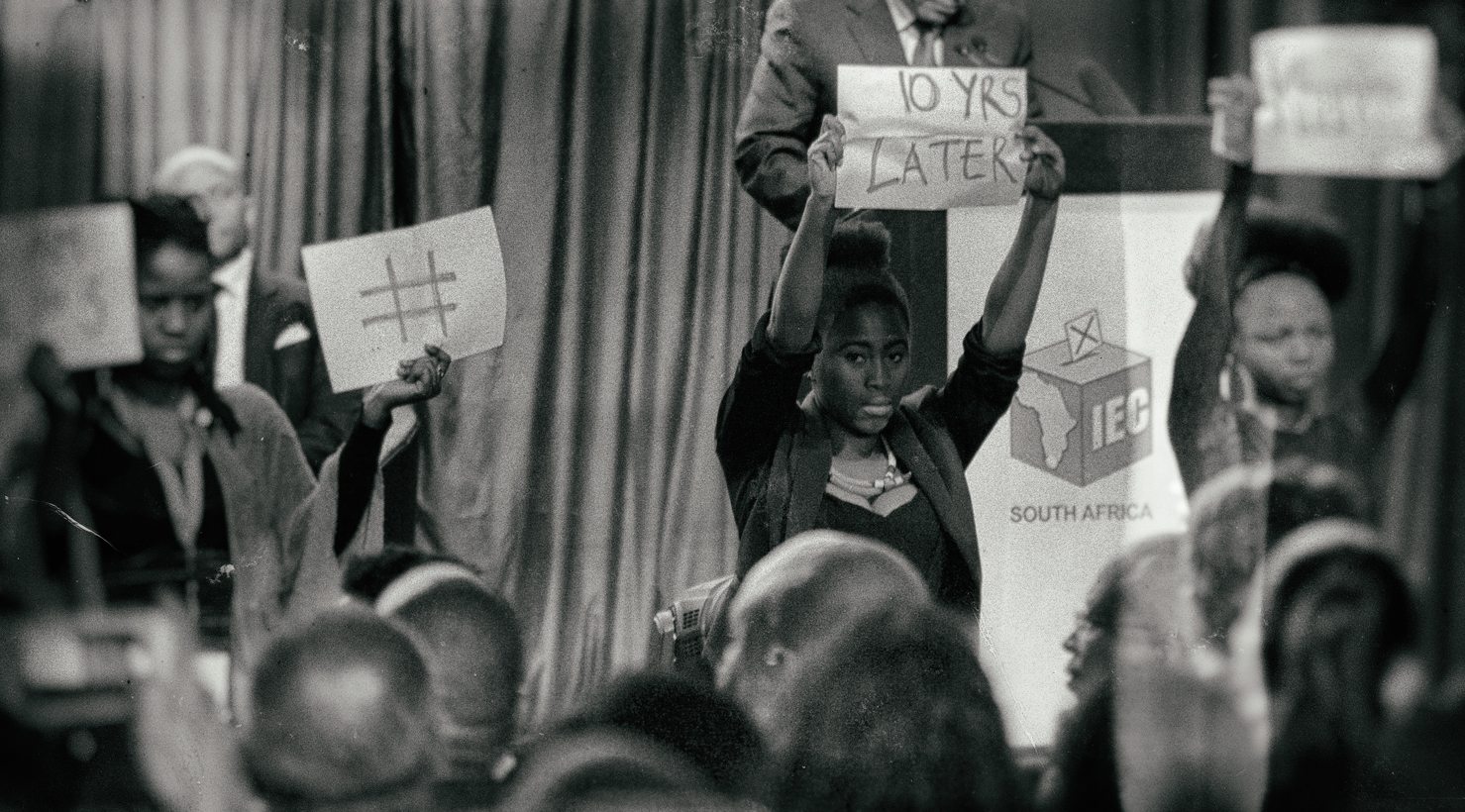 Women’s Day 2016 calls for quiet reflection amid the noise of our healthy and boisterous democracy. A letter by the Women of SECTION27 (signatories below

This Women’s Day we need to pay tribute to those who walked ahead – women like Lilian Ngoyi, Helen Joseph, Rahima Moosa, Sophia Williams De Bruyn and thousands of others who sent a message to the world on 9 August 1956 that if you strike a woman, you strike a rock. Women who tread a path in which many, many brave souls can today follow.

Almost to the day, 60 years later South Africa is having heated discussion over the four young women who stood with their backs to President Jacob Zuma as he officially announced the Local Government Elections results – holding up homemade signs with a clear message: #RememberKhwezi.

We have been appalled but unsurprised at how detractors have attempted to to delegitimise this dignified and silent protest by highlighting the four women’s political party affiliations. We hope that their protest may be a watershed moment for once again placing the many lived experiences of women, and black women in particular, back on the agenda of politicians and policy-makers.

At SECTION27 we believe we need to remember the many women who every day remind us that our work is not done and that we have to keep walking until we have a more equal, peaceful, fair and gentle world.

We would like to remember and pay tribute to some of the women we believe need to be heard and remembered.

We #RememberRosinaKomape who ran down that long dusty road outside Chebeng Village to get to her son’s school only to see his lifeless, drowned body at the bottom of a collapsed pit toilet.

We #RememberTheBopheloHouse94, a group of elderly, mostly women community health workers who have been found guilty of attending an “illegal gathering”. They were arrested, piled into police vans and held like criminals in police cells for holding a prayer vigil outside Free State Health MEC Benny Malakoane’s office building when he ended all community health worker contracts with no explanation.

We #RememberNosiphoEuniceDala, widow of Zwelakhe Dala who died on 30 March last year after contracting silicosis on the gold mines. He worked as a miner for 28 years and received no compensation.

We #RememberNonthlanthlaDaphneNkosi, the birth mother of Nkosi Johnson, whose son fought bravely to the end, trying to convince the South African government to give antiretrovirals to HIV-positive pregnant women – avoiding further suffering, death and children orphaned.

We #RememberCharleneWilson, a Treatment Action Campaign leader, sister, daughter, community activist and our comrade who died in 2003. She lived openly with HIV in a community that was often hostile to her. She fought for openness in her community and worked closely with the nurses and doctors at the clinic in Eersterust, ensuring that people living with HIV and AIDS received proper treatment and care for their opportunistic infections. For her, the life-saving treatment was too little, too late.

We #RememberAndisiweDwenga whose career was nearly cut short because she tested positive for HIV and the military decided she was not strong enough to be a soldier. Today she lives openly and positively, empowering other young women that their HIV status should not limit your ambitions.

We #Remember the thousands of nameless domestic workers, nannies and cleaners who get up before the sun rises to hail public transport and travel long distances to suburbs where they scrub floors, wash clothes and bring other people’s children up – many for inferior salaries and for bosses who exploit the fact that they are not sufficiently protected by the labour law.

We #RememberGogoEthelMbatha who stoically and with dignity raised her grandchildren on a small grant – not allowing herself to dwell too much on the HIV epidemic that snatched her children from her embrace.

We #RememberTheTransCollective for highlighting the importance of womxn. Transgender people have been pivotal in the student-led fallist movement and form part of the key populations and struggles against discrimination.

We #RememberPhyllisNtantala, the struggle heroine and radical intellectual who passed on recently. She was more than the mother of Pallo and wife of AC Jordan. She was at the forefront of fighting against patriarchy in its various guises, including speaking truth to black men in the struggle when most people wouldn’t.

As women, we remember we have the power, we have a voice. We owe it to the women who went before to keep speaking out, to keep being the voice of bullied community health workers, young women in school with no sanitary pads or girls with no textbooks or who are sexually abused at school. Today, we will remember, but we will also renew the battle until we are all free. Today, we post the #RememberKhwezi hashtag on our social media platforms as a tribute to those who went before, but also a reminder for those who are still walking that long road to freedom. DM

The original photo of #RememberKhwezi protest by Greg Nicolson.