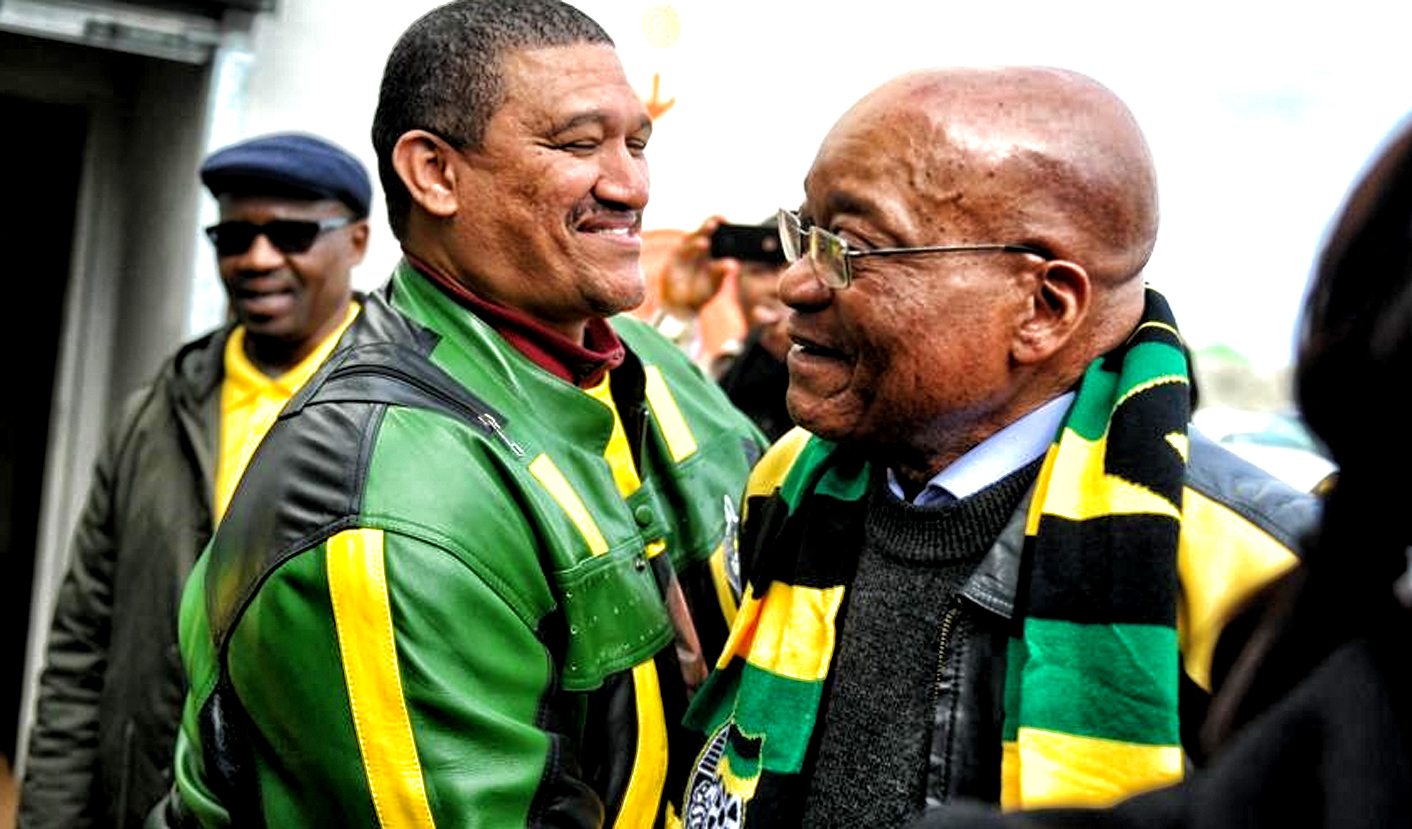 In a tumultuous week for South African electoral politics, who can even remember suspended Western Cape ANC leader Marius Fransman’s urgent application two weeks ago to the Cape High Court, seeking reinstatement as well as demanding the release of an ANC Integrity Commission report into charges of sexual assault? While the Western Cape ANC might be eating DA election dust, a startling nugget of information lies buried in court papers. An allegation that Fransman had introduced President Jacob Zuma to leaders of the 28s – the most feared and violent gang in the Western Cape. By MARIANNE THAMM.

The accusation is not new. In November 2015 the amaBhungane Centre for Investigative Journalism published a shocking report that President Jacob Zuma had, prior to the 2011 local government elections, met with feared Western Cape gang bosses at his official residence Groote Schuur.

The meeting, which amaBhungane confirmed with two independent sources, had been facilitated by known Durban underworld figure, Lloyd Hill, and was aimed at garnering support for the ANC in the region. The gang leaders pledged to back Marius Fransman in his push to win back the Western Cape from the DA. Present at that meeting, said amaBhungane, were Quinton “Mr Big” Marinus and leader of the Americans gang, Sanie American (real name Igshaan Davids).

Days after the report ANC Western Cape spokesperson, Yonela Diko, lashed out, denying the meeting had even taken place and dismissing the amaBhungane investigation as “frivolous, incoherent and pathetic”. Diko added that “gangsters may grab headlines now and again, but nobody respects them”.

Respect for another notorious Cape Town underworld figure, Mark Lifman, arrived a short while later, however, in the form of a VIP invitation to President Jacob Zuma’s birthday rally at Vygieskraal in Cape Town on 12 April 2014. Lifman, wearing an ANC T-shirt with Zuma’s face stretched across a toned chest, was snapped backstage at the bash chatting with Fransman.

“To see this support for the ANC makes me very happy, it is a wonderful birthday present for me. Tata Madiba, who loved the ANC until the end of his days, must be smiling today in his resting place! Dis duidelik! Ons gaan stem en ons gaan wen,” Zuma laid it on for the crowd.

Fast-forward to January 2016 as the next political A-bomb hit the Western Cape ANC when Fransman, after failing to deliver the region in 2011 and 2014 without any political consequences, offers a young woman, Louisa Wynand, employment days before he is due to leave on a road to trip to Rustenburg to celebrate the ANC’s 104th anniversary. He sends her a series of WhatsApp messages.

We know the story from here.

Fransman, who had been untouchable until then, finds himself suspended – months before the election. He also faces the ANC’s Integrity Commission.

He doesn’t take it lying down. He denies it all. Says it is a set-up. He’s a victim. Blames Wynand for being a “honey trap”. Then, changing tack, blames – as he continues to do – rival factions for “setting him up”.

Fransman appears strangely emboldened throughout the ordeal. He knows President Zuma supports him. He has said so in public. Often. A Presidential Endorsement he has, the ultimate stamp of approval. Fransman’s supporters on social media attack Wynand, they circulate photographs of her, vilify her. At this point no one is #RememberingKhwezi yet.

Fransman makes a brief but highly public comeback days before citizens are due to vote and when President Zuma tours Western Cape townships. In matching black, green and yellow leather jackets, Zuma and Fransman press flesh and promise to lead the citizens of the Western Cape out of Zille’s Babylon.

It also finds that Fransman has indeed brought the party into disrepute and has tarnished its image (what is left of it). The report is sent to the ANC National Working Committee on 11 July. It is accepted the same day.

Fransman is furious. Not only because he has been suspended but because the report has been leaked. He embarks on hasty court action, days before the election. He files an urgent application with ANC Secretary General Gwede Mantashe and Frene Ginwala, Deputy Chair of the Integrity Commission as respondents.

A furious Mantashe files a responding affidavit and in it includes the Integrity Commission’s report (as well as other revealing annexures) which the SG now knows will become part of the court record, the public court record. Mantashe also reminds Fransman that he will be applying for costs. Money clearly talks and Fransman withdraws all further legal action after he had got his hands on the IC report.

But now it is also public property, filed with the court for all of us to peruse at leisure. And there are a few nuggets to be mined between the annexures of e-mails and ANC resolutions.

Paragraph 21 of the IC report which sets out the backdrop according to testimony offered by Louisa reads, “In Rustenburg they went to a guest house owned by comrade Patrick Chauke, a Member of Parliament. They left all their bags there. Louisa says that this was the first time that she began to experience real fear. That is when Chauke called her aside and asked her if she knew that Fransman was the person who had ‘made’ the president sit around a table with the 28s gang.”

Wynand remembered Chauke’s aside, she told Daily Maverick, precisely because it added a layer of terror to an ordeal, she says, that began in the car shortly after Fransman and his colleagues Majiet Mogamat and Donovan Cloete had picked her up for the Rustenburg road trip.

What the Integrity Commission report also suggests is that there are other women who have come forward and have accused Fransman of similar predatory behaviour. The woman who had originally sent these affidavits from the other women to Deputy Secretary General, Jesse Duarte, Ilze Folscher, had later retracted them and had resigned from the ANC. But a sworn statement is a sworn statement. It is likely that these other women might be called to testify at Fransman’s National Disciplinary Committee hearing.

Marius Fransman and the Western Cape ANC are at present a sideshow in the region where the DA gained 66.6 percent of support, decimating the ANC. And while the ANC regionally is “re-grouping” to embark on serious “introspection”, Fransman, like President Zuma, will have to account for his behaviour.

The SAPS and the NPA, in the meantime, appear to be mired for months now in a highly complex investigation of a relatively simple matter as they have not yet decided whether or not to prosecute Fransman. Wynand has also been treated with characteristic disrespect.

Wynand, when she testifies at Fransman’s DC, will have to do so on her own time. She will have to fly to Gauteng, take time off work and find herself subjected to intense scrutiny. She will be traumatised again but she is prepared to go through with it, she told Daily Maverick. Wynand, however, cannot be allowed to be used as a political football.

Like Khwezi, the woman who accused President Jacob Zuma of rape and who was honoured in a silent protest at the IEC on Saturday night, Wynand must be supported and heard.

The death toll on the Cape Flats due to gang violence has risen sharply since 2011 when President Zuma is said to have met with these men who promised to deliver the Western Cape. Instead they have delivered acres of fresh graves, traumatised communities and deeply compromised leadership at national and local level. DM

When it comes to alcohol, know your limits and watch your health