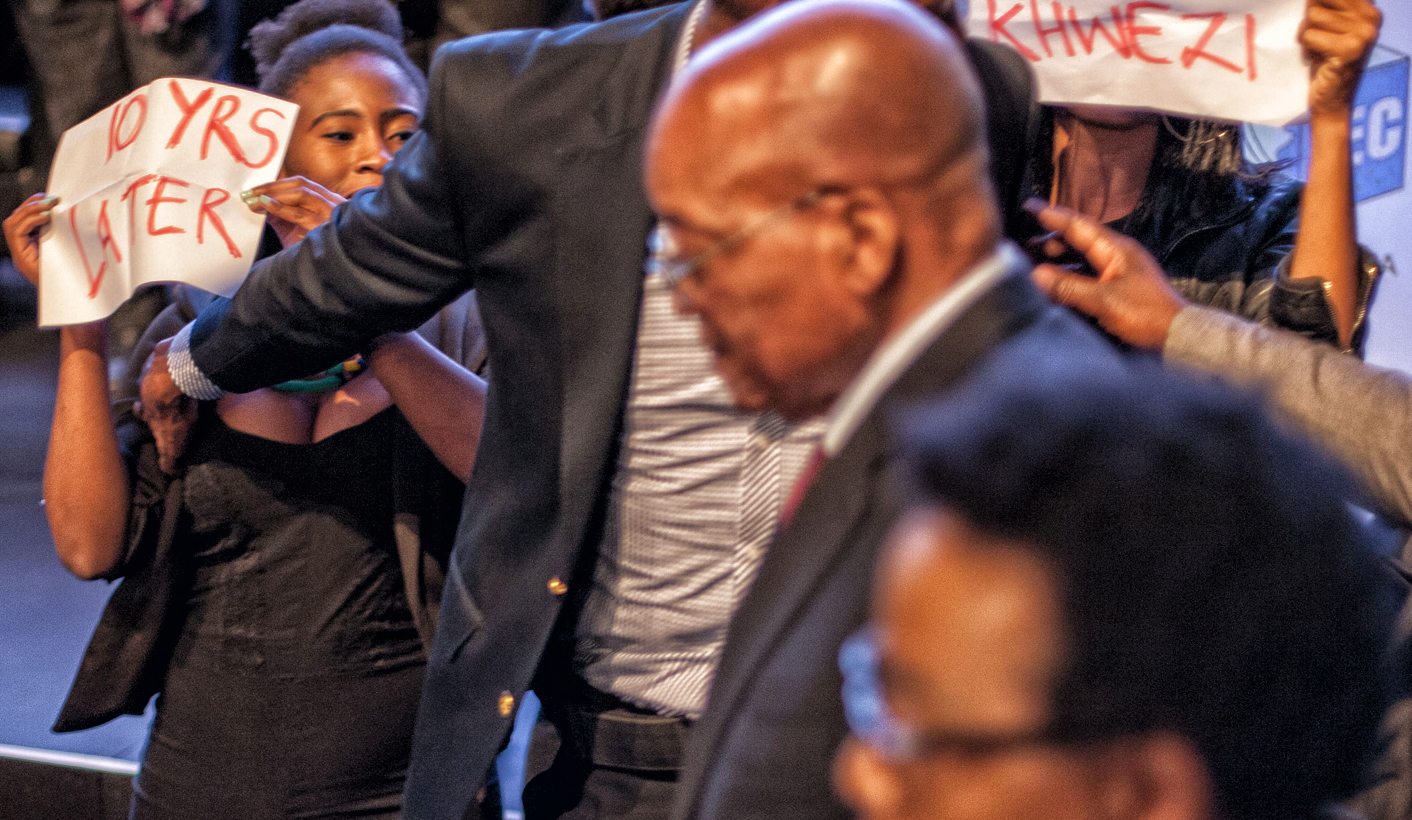 Results for the City of Johannesburg finally came in on Saturday night after the IEC officially announced the outcome of the elections, but the much-awaited ceremony was overshadowed by a silent protest during President Jacob Zuma's speech. The result in Joburg, 44.99% for the ANC, 38.4% for the DA and 10.94% for the EFF, casts further uncertainty over the future governments of Gauteng metros, with no outright winner in any of its councils. By GREG NICOLSON.

Photo: ANC National Chairperson Baleka Mbete and the party’s Tshwane mayoral candidate Thoko Didiza talk before the official announcement of the results at the IEC’s national results operation centre. The DA emerged with the most council seats in Tshwane, where no party took a majority to form a government, with the ANC second and EFF third. (Greg Nicolson)

Photo: President Jacob Zuma claps during the IEC ceremony, before a protest during his speech. While his party the ANC won a large majority of council across the country, it saw support significantly dwindle and fell bellow 50% in all of Gauteng’s metros and Nelson Mandela Bay. (Greg Nicolson)

Photo: A number of objections were raised during the vote counting and auditing process, but the IEC declared the elections free, fair and credible. It announced that in Stellenbosch, however, there must be a re-vote in six wards. (Greg Nicolson)

Photo: President Zuma’s speech was overshadowed by four protesters who stood in front of him with signs reading “I am 1 in 3”, “#”, “10 Yrs Later”, “Khanga” and “Remember Khwezi”. The silent protest referred to allegations Zuma raped “Khwezi” (not her real name). Zuma was acquitted of the charges in 2006. (Greg Nicolson)

Photo: The protest was silent and while Zuma’s security looked confused as to what to do, they did not remove the four women. They remained in front of Zuma throughout the speech. (Greg Nicolson)

Photo: It was unclear whether the President Zuma knew what the protest was about, as the women were silent and their placards faced the audience. The crowd was stunned. Representatives from the EFF walked out before Zuma’s address. (Greg Nicolson)

Photo: Zuma’s bodyguards shepherded him past the protesters without the president acknowledging them. “Remember Khwezi” they said as he passed. (Greg Nicolson)

Photo: After the president passed, the women were shoved by the bodyguards and fell over. (Greg Nicolson)

Photo: After passing the protesters, Zuma took his seat, grinned, perhaps oblivious to what was taking place, as the women were removed. (Greg Nicolson)

Photo: A cry could be heard from the restricted area where the protesters were taken and journalists rushed to the car park to see if they would be thrown out or arrested. The four were allowed to leave. (Greg Nicolson)

Photo: ANC Secretary General Gwede Mantashe spoke after the IEC ceremony. Asked about the protesters, he said it’s a sign of the entrenched rights in South Africa. (Greg Nicolson)

Photo: Three days after South Africans cast their votes in the municipal elections, the IEC’s results centre closed on Saturday night. The fate of the most contested metros is now in the hands of the politicians as they enter into coalition discussions. (Greg Nicolson)

Main photo: Zuma’s bodyguards shepherded him past the protesters without the president acknowledging them. “Remember Khwezi” they said as he passed. (Greg Nicolson)