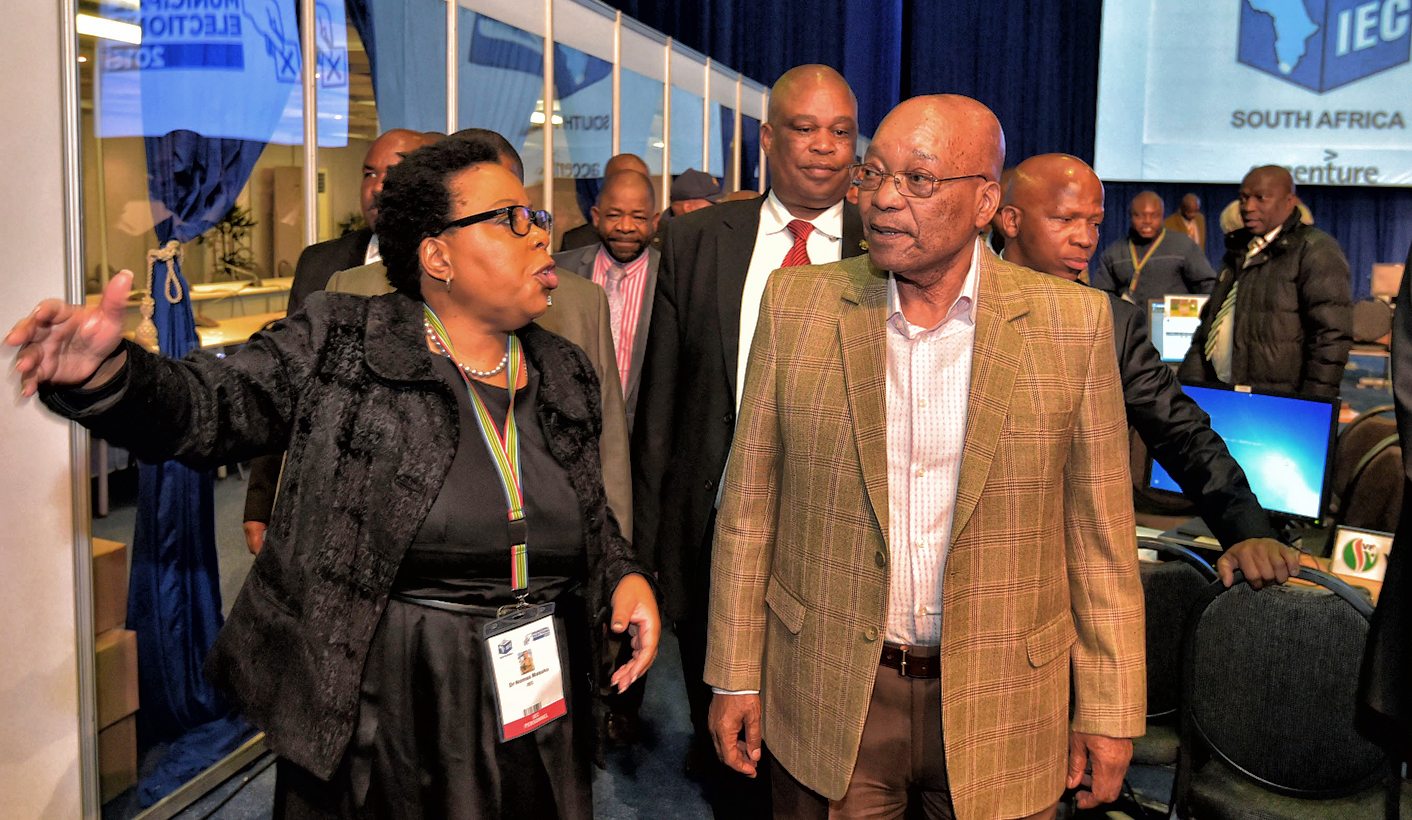 Whatever the final outcome of the 2016 local government elections, the African National Congress (ANC) has received a nasty wake-up call from the electorate. With almost 90% of the votes confirmed by late Thursday night, the ANC had already lost one metro and was locked in a nail-biting race for control of the three Gauteng metros. A significant portion of the ANC’s support base has clearly turned against Africa’s oldest liberation movement. The Democratic Alliance (DA), meanwhile, has exceeded its own expectations and scored major psychological victories in this election. The Economic Freedom Fighters (EFF) is unlikely to win a municipality, as it had hoped, but now steps into the role of kingmaker in Gauteng. By RANJENI MUNUSAMY.

Nelson Mandela Bay. How did the ANC lose a municipality named after its greatest icon? It is a blow from which the party will never recover. This municipality is the capital of its heartland, the province that produced legends of the liberation struggle – Nelson Mandela, Oliver Tambo, Govan Mbeki and Raymond Mhlaba, among others. Now it has fallen into the hands of opposition parties led by the DA, the party that has already challenged the ANC over the legacy of Mandela.

DA leader Mmusi Maimane announced his party’s majority in Nelson Mandela Bay on Thursday evening, saying it was “beautiful” that they would be governing the city named after the founding president. After being taunted and insulted by the ANC, particularly President Jacob Zuma who repeatedly called Maimane a snake, the DA certainly has a licence to gloat.

The ANC remained in denial over its loss of the Nelson Mandela Bay metro, with secretary general Gwede Mantashe saying the party was lodging an objection to the results over two stacks of ballot papers allegedly found dumped. Asked whether these ballot papers could change the result in the municipality, Mantashe was certain it would.

Trying to argue that the results in the metro are compromised might temporarily distract the ANC from its real problems that it wilfully ignored. The warning lights had been flashing for years, with voting patterns signalling a decline in support for the ANC. As a series of corruption scandals and debilitating factional battles beset the ANC in Nelson Mandela Bay, it juggled around mayors and neglected to deal decisively with service delivery problems and the misspending of funds.

The parachuting in of South African Football Association president Danny Jordaan as a big personality mayor last year was an artificial solution to the myriad of problems. It did not work. The municipality is now likely to be governed by a coalition led by the DA’s mayoral candidate Athol Trollip, in partnership with the United Democratic Movement.

As if this is not bad enough, the ANC was on Thursday night still stuck in a dead heat with the DA for control of Tshwane and Johannesburg. The final results for these two metros are only expected by mid afternoon on Friday, keeping the ANC in agony until then.

This is not just a numbers issue, but a huge psychological battle.

Tshwane is South Africa’s capital and seat of government. It is home to the highest number of diplomatic missions in the world after Washington. It could be rather unpleasant for Zuma to run the country from the majestic Union Buildings in a city controlled by a coalition of opposition parties. Johannesburg is Africa’s largest business hub. The world comes to do business with South Africa in Johannesburg, also the ANC’s headquarters.

In both Tshwane and Johannesburg, the ANC has been on a downward trend, yet it refused to listen to its own structures, including the Gauteng ANC, about how Zuma’s leadership, the poor management of the economy and the litany of corruption scandals in government had impacted on its middle class constituency. Poorer people in townships and informal settlements have been in a perpetual state of protest. Instead of listening, the ANC left government to fight fires.

Across society, people disapprove of Zuma but the ANC has disregarded public sentiment. The ANC’s national leadership has constantly defended Zuma and protected him from accountability, irrespective of the backlash from society. That backlash has now translated into votes, something the ANC thought would never happen.

Throughout Thursday, as results trickled in from across the country, ANC leaders walked around in a daze at the Independent Electoral Commission’s results operations centre in Tshwane. They were taken aback by lower than expected turnouts in areas that were their traditional strongholds and stunned as it become clear they had lost some municipalities in the Eastern Cape and Western Cape to the DA, and to the Inkatha Freedom in KwaZulu-Natal. Perhaps most difficult to swallow was that the DA, with Herman Mashaba, a novice in politics as its mayoral candidate, managed to hold them in a deadlock in Johannesburg where Parks Tau has excelled as mayor.

Cape Town has now been conclusively won by the DA with an over two-thirds majority. Regaining control of that metro and the Western Cape province, with most of the municipalities under the control of the DA, is now a pipedream for the ANC.

According to the provisional results on Thursday night, the ANC was in the lead nationally with 54% of the vote. While the party issued a statement saying it was “buoyant and energised” by the results, the danger of it remaining below the 60% mark – the first time since it took power in 1994 – will be a major psychological upset.

The DA on the other hand was celebrating that it remained in a neck-and-neck battle with the ANC in the Gauteng metros, including Ekurhuleni. The DA had anticipated a win in Nelson Mandela Bay and thought it had a shot of winning Tshwane, particularly after ANC members rebelled violently against the appointment of Thoko Didiza as their mayoral candidate. It had aimed to cut into the ANC’s majority in Johannesburg. It gave DA leaders tremendous delight to watch the ANC sweat through another long night as the fate of the Gauteng metros hung in the balance.

The EFF appears to have overestimated its national support, initially pitching to triple the 6% vote share it received in the 2014 elections. By late Thursday night, with 90% of the vote in, the EFF had failed to meet its goal to win at least one municipality. However the EFF made a good showing in Gauteng, with between 9-10% of the vote in the three metros. EFF leaders indicated they would be amenable to talks with the DA over coalitions in Gauteng but ruled out co-operation with the ANC.

The ANC only has itself to blame for the miserable situation it finds itself in. It became exceptionally arrogant and conceited about its electoral dominance, perceived itself as being invincible and relied on its formidable history for political survival. It consistently disregarded the anger and discontent of South Africans, which is why our country is in a continuous state of rebellion. It allowed its leader to soil the ANC’s magnificent history and reputation and aided him to get away with violating the country’s Constitution. Corruption and abuse of the state has seeped into our culture.

Now a clear message is being communicated to the ANC: continue this behaviour at your own peril. When the ANC does an assessment of the results and voting trends, it will become obvious that many people voted to punish them. It can either acknowledge this and begin a process of self-correction or continue embracing the rot that got it to this point. DM