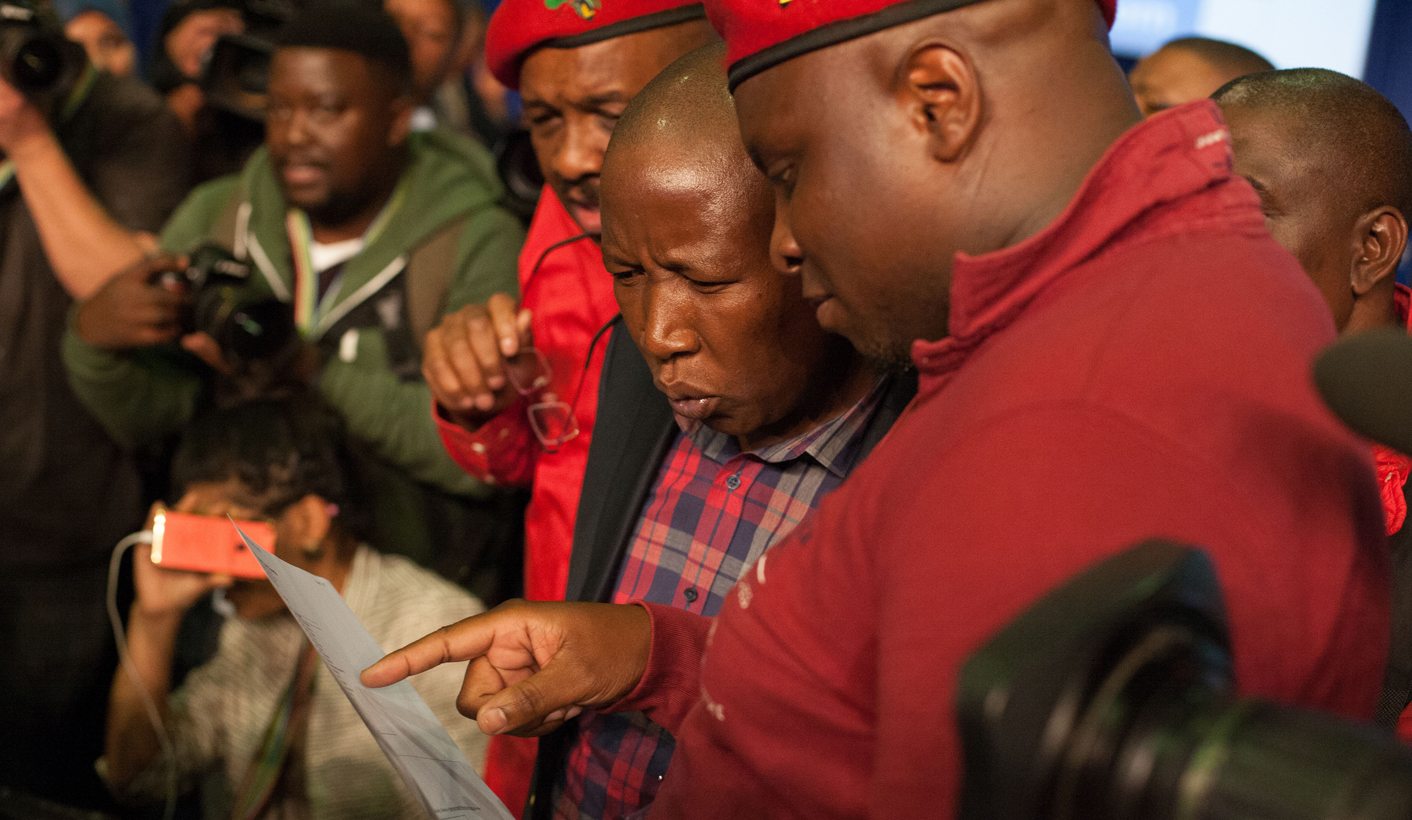 Election results in Tshwane and Johannesburg remained close on Friday afternoon as party leaders took stock at the IEC's results centre. The ANC's Cyril Ramaphosa was positive about his party's performance while the EFF's Juluis Malema was in performance mode, but revealed little about the possibility of joining coalitions. Once again, the DA's Mmusi Maimane was triumphant, claiming another metro. By GREG NICOLSON.

At 5pm on Friday afternoon the DA’s Mmusi Maimane claimed another victory. His analysts have confidently projected the DA will emerge as the leading party in Tshwane, requiring a coalition to govern the municipality. If the DA is correct, as a similar projection for Nelson Mandela Bay was on Thursday, the ANC will have lost two key metros by Friday night.

“We are excited and elated that we’ll be the largest party in the city,” said Maimane.

IEC deputy chairperson Terry Tselane said, “There is nothing irregular or wrong with the leader of the DA making a projection.”

Photo: Deputy President Cyril Ramaphosa notes the 2016 local government election results at the ANC desk at the IEC’s national operations centre. The ANC has already lost one key metro in what appears to be its worst performance at an election. (Greg Nicolson)

ANC Deputy President Cyril Ramaphosa toured the IEC national results centre on Friday. He claimed it was too early to judge the ANC in key Gauteng metros, but promised the party would listen to voters where it has seen a decline. The party conceded Nelson Mandela Bay on Friday after it withdrew an objection regarding dumped ballot papers.

“This is not a cliché but the ANC remains hopeful that we will emerge as the leading party in those metros,” said Ramaphosa on the tight races in Gauteng. “I think at this stage it’s a bit premature to do an analysis as it always premature to read somebody’s tombstone before they die.”

“But obviously we wait until the story of the metros comes out and I’m sure once when it comes out people will be surprised that the ANC which they thought would be on its knees falling will be rising to the top once again,” the deputy president continued.

On Friday afternoon, the ANC had 54.28% of the vote across the country. Ramaphosa it was a “phenomenal achievement” for millions to have voted for the party. “I think it’s an achievement that should not be dismissed. These are real, live South Africans who have demonstrated their confidence in the ANC.”

With neither the ANC or DA likely to take an outright majority in Tshwane or Johannesburg, governments in the cities could be determined by the EFF, which has taken over 10% in both metros.

Party leader Julius Malema held a press conference at the IEC national results centre on Friday. He claimed victory for bringing the ANC under 60% and said no party has yet approached the EFF to talk about forming a coalition.

“I’m happy that the EFF has managed to increase its supporter base and increase its presence in South African politics,” said Malema. The “most arrogant organisation”, the ANC, is “running around like headless chickens” after the EFF was the first party to humble it, he said. “Now the whispering is too loud. The message is clear. The writing is on the wall and 2019 is going to be a serious challenge for the ruling party,” said a confident Malema.

The EFF has so far failed to win a municipality, which it hoped to do so it could demonstrate its model of governance, but Malema claimed the election has been a success.

Malema said no party has approached the EFF to talk about forming a coalition in areas expected to be hung but said he will talk to anyone who wants to engage. A coalition would need to fit the party’s cardinal pillars, said Malema, noting they would have to agree on the issue of land and that the government would have to benefit the “African child”. “If we can’t agree we go on a re-run,” said Malema. “We are more than happy to be opposition. I’m not desperate to be anything anywhere.” There are three outcomes in municipalities where no party has a majority, he said: a coalition, a re-run, or the EFF could abstain.

The IEC’s Tselane said there are 49 outstanding objections, which the commission will discuss on Friday evening and must be resolved before the official results are expected to be announced on Saturday at 6pm. “The results have not yet been finalised by the commission,” he noted, as at least Johannesburg still hangs in the balance. DM