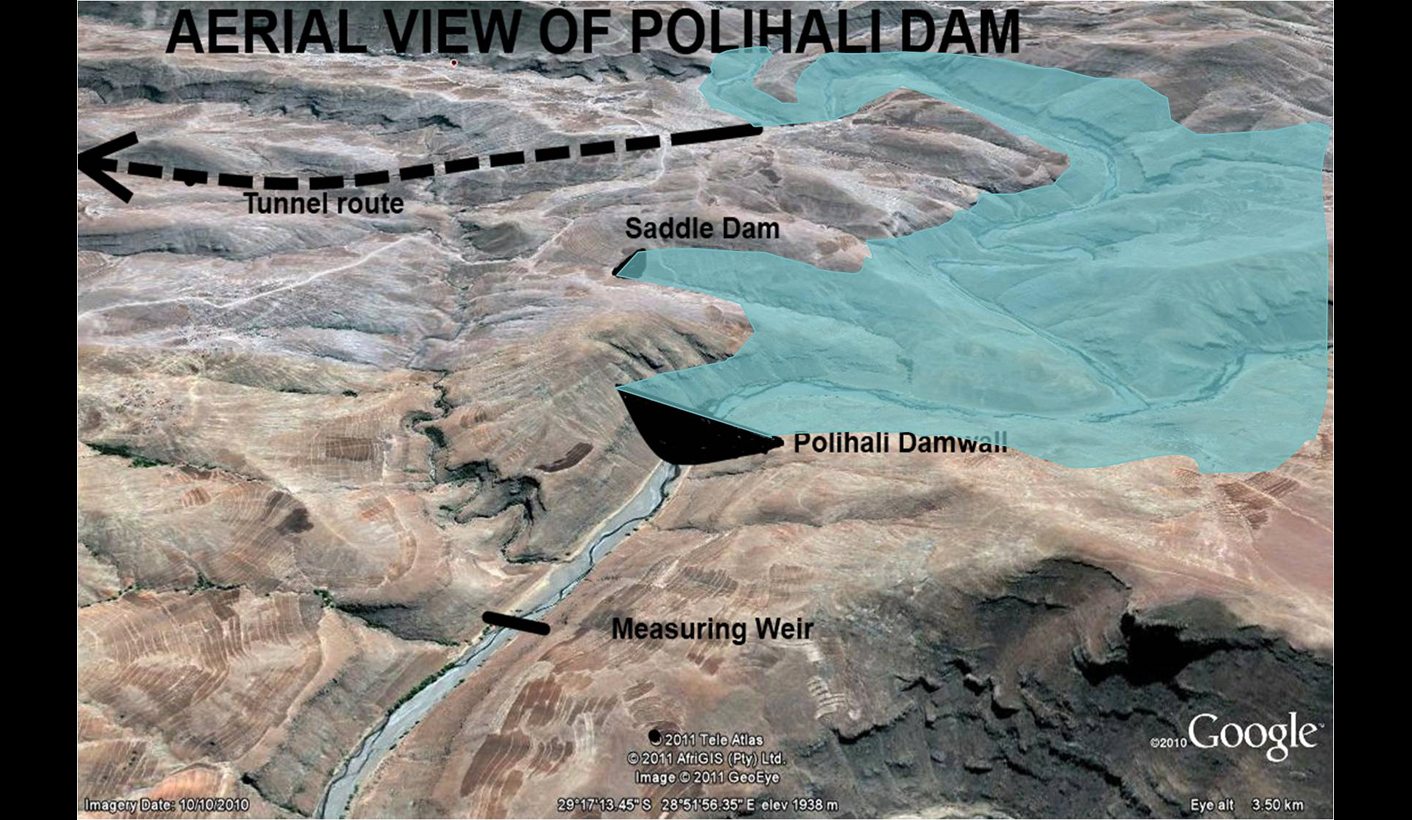 Water Affairs minister Nomvula Mokonyane has allegedly insisted on new terms of reference for a R26-billion Lesotho water project, raising concerns about political interference and a further delay in a scheme vital to Gauteng’s water security. By TABELO TIMSE and BILLY NTAOTE for AMABHUNGANE.

The Polihali dam, part of the Lesotho Highlands Water Scheme, was originally scheduled for completion in 2018 but has been repeatedly postponed. It will now be completed in 2025, according to South Africa’s water affairs department.

Senior department officials, who asked not to be identified, said that the latest glitch is an agreement between South African and Lesotho governments that the main contractor chosen to design and build the dam must share 20% of the contract with a black empowerment partner.

The new requirement is said to have been strenuously promoted by Mokonyane, whose alleged interference in the tender process is seen as central to the project’s delay.

LTE is the subject of a probe by the Special Investigating Unit, after President Jacob Zuma issued a proclamation in April in connection with water and sanitation contracts in Limpopo and Gauteng, which the company allegedly landed without going through a proper tender process.

The company had denied any wrongdoing. Mokonyane has rejected the allegations and denied any improper relationship between herself and LTE.

The minister told Radio 702 that the delays could be blamed on Lesotho’s political turbulence and, she suggested, the lack of a procurement policy that promoted black interests.

“As a political principle, I cannot allow a situation where there is no procurement that allows inclusivity that promotes national interest of South Africans and Basotho,” she told the station.

Departmental spokesman Mlimandlela Ndamase did not reply to questions about whether the terms of reference have changed and whether the new terms only apply to the design and construction of the dam.

City Press also reported that in a bid to hijack the bilateral Lesotho Highlands Water Commission (LHWC), Mokonyane and Lesotho politicians fired and replaced officials seen as obstacles to their plans.

Charles Putsoane, Lesotho’s chief delegate to the LHWC, was axed in April 2015, allegedly because of incompetence and insubordination.

In October 2015 Mokonyane removed South Africa’s chief delegate Dr Zodwa Dlamini – who has 10 years of experience in water megaprojects – from the project, offering no reasons for this.

She was replaced by Gauteng’s former MEC for infrastructure development Bheki Nkosi, who served under Mokonyane when she was Gauteng premier and worked alongside her in ANC provincial structures.

Dlamini and Putsoane declined to comment when contacted by amaBhungane.

The Public Protector is probing the issue and has confirmed referring allegations of irregularities to the Auditor-General for an audit.

Other procurement related to the dam started last year, according to the 2014/2015 annual report of the Lesotho Highlands Development Authority.

In answer to e-mailed questions, the authority said five contracts have now been awarded.

But experts in the water sector warned that the delays in awarding the main contract are a potential threat to South Africa’s water security.

The Polihali dam is a strategic intervention to improve water availability in Gauteng. Comprising two major reservoirs enclosed by a 145m dam wall, it will send water through a series of tunnels and along the Ash River in the Free State into the Vaal system.

Mike Muller, of the Wits School of Governance, said that on a project of this magnitude a six-month delay would cost about R500-million.

“What happened to Mama Action, as Mokonyane used to be known? We don’t want a repeat of what happened in phase one, with corruption on the Lesotho side. We certainly don’t want to find that what is holding up this project is a question of who’s going to benefit from it.”

Chris Herold, president of the South African Institution of Civil Engineering, said that by the time the Polihali Dam is commissioned, South Africa will be back in deficit in terms of water supply because the entire yield of the new dam will already be committed.

“We’re probably about 1,000-million cubic metres short of what we should be at the moment, following a two-year drought.”

By 2025 South Africa would have to commission the next phase of the Thukela-Vaal water transfer, including a dam on the Bushman’s River.

Herold added that South Africa’s water problems were compounded by the failure of municipalities to curtail leakage from potable water supply systems, which appeared to have grown over the past 20 years.

Meanwhile, officials in Lesotho said the Polihali Dam project has also been hit by infighting at the Lesotho Highlands Development Authority, which is operating without a board of directors following a spate of resignations and dismissals.

One Lesotho source close to the project added that the LHWC is being hijacked by politicians in the country’s new coalition government eager to use the commission as a source of patronage.

Combined with the lack of an oversight body for the authority, this is a perfect breeding ground for corruption, the source said. DM