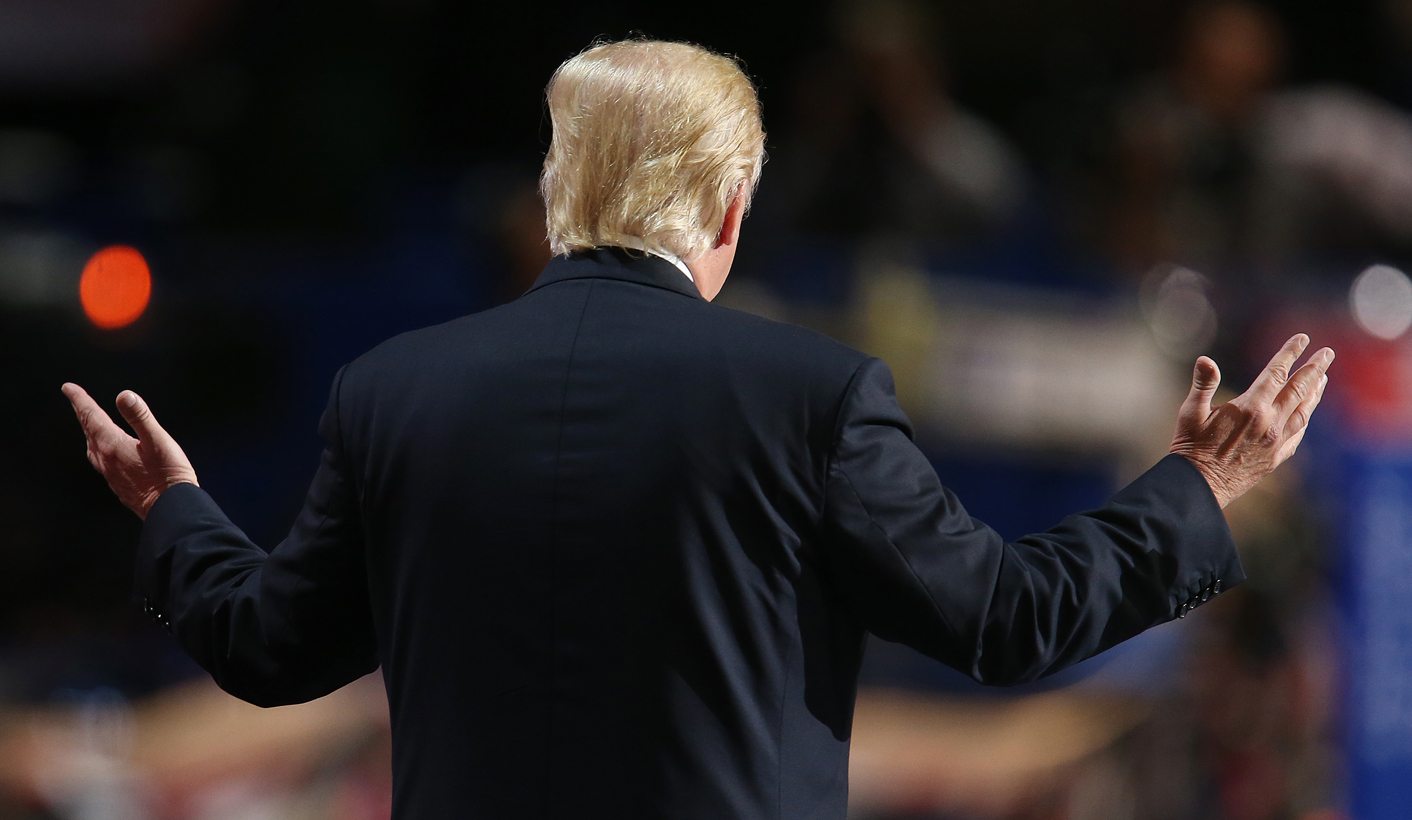 It is becoming almost impossible to stay ahead of this news cycle as Donald Trump's wild and crazy public rhetoric just became even more outrageous. Even the jaded J. BROOKS SPECTOR is astounded.

Back in 1976, Gerald Ford, the accidental president who took over from the disgraced Richard Nixon, was in a tough presidential race with challenger Jimmy Carter. Ford had increasingly become an object of derision on the part of late night television comics for his outsized, seemingly unrestrained advocacy role in dealing with a potential swine flu epidemic; his apparent clumsiness (after falling down a set of airport ramp steps on national television); and his growing reputation for mental thickness. All of this was despite his history as an outstanding university athlete, an attorney and for many years as a well-regarded, albeit generally quiet, congressman from Michigan.

But Ford’s electoral chances suffered a metaphorical coup de grace when, in the midst of a nationally televised candidates’ debate, in response to a question about Poland’s unhappy circumstances in the depths of the cold war, Ford had declared – in spite of all evidence to the contrary – that country was entirely free from Soviet domination.

Despite incredulity on the part of the television news moderator, Ford doubled down and insisted the Poles would never submit to Russian domination. Audiences gasped, newspaper columnists had a field day with Ford’s visible public humiliation, and it all left an indelible impression on the public that Ford was an amiable bumbler incapable of rising to the challenges of being president.

And the public made its choice. Of course that was back when the print and broadcast news business – emboldened by its success with Watergate and the Pentagon Papers – still chased many of its stories and leads assiduously. And this was at a time when a news cycle wasn’t measured in milliseconds and where any story was almost instantly replaced by another juicier one.

But that was then, this is now. In addition to all of his other policy peccadilloes, Republican Party presidential candidate Donald Trump has generated a whole political system’s worth of outrageous statements, charges, insults and assorted verbal rockets aimed at people and groups. By one count, the identifiable insults to individuals, races, ethnicities, religions, genders, disabilities, and sexual statuses had already topped 250 incidents. But that was before the Democratic Party’s national nominating convention took a unique turn for Trump.

As the world now knows, on the third day of that convention, Khizr Khan and his wife, Ghazala, stood before the hall, and the world via television and the internet, and called out Trump as a man who had sacrificed nothing, and who had failed to understand anything about duty and honour. And in making his wild rants about Muslims and denying them access to America, Trump had dishonoured the memory of their own son, an army captain (and a Muslim) who had died at the hands of a suicide bomber while protecting his unit stationed in Iraq in 2004. Their solemn, dignified witness brought the house down and close to tears – and many commentators saw this as perhaps the first real chink in Trump’s heretofore entirely Teflon-coated, thoroughly armoured public persona.

In response, Trump went on the offense, insisting that his business ventures represented his own great sacrifice and he then accused Mrs Khan of having been silenced by the Democratic National Committee and candidate Clinton. Hardball time. But, over the weekend, the narrative started to run starkly against The Donald – especially when Mr Khan appeared on the Sunday talk shows in as dignified a stance as his first public appearance, and Mrs Khan wrote of her grief in a column printed in the press and then, on Monday, spoke of her continuing grief and the hurt from Trump’s words.

Even before this, the Trumpster has been tied to another challenge, the increasingly likely chance Russian intelligence had been instrumental in obtaining and releasing to Julian Assange’s Wikileaks operation, thousands of internal emails from the DNC that demonstrated a less than stellar record of neutrality between candidates Clinton and Sanders on the part of the DNC in managing their primary election process. The release by Assange was clearly designed to embarrass Clinton, but It also seems to have represented an engagement by Russian intelligence in attempting to influence the US domestic electoral process – as opposed to more usual, quotidian, normal espionage.

Then, in a widely viewed news conference, Trump challenged Russia to find those 30,000 emails not released by Clinton as part of her earlier email problems, and to help make them public. Smart move by Trump, maybe, to help confound his opponent, save for the fact that most commentators interpreted Trump’s challenge as an encouragement by Trump to the Russians to mix still more deeply in the US domestic political process.

This skein has now become entangled with yet other disclosures that the Russians had penetrated still more DNC and DNC-related bodies. While the federal government has yet to issue a final report on these intrusions or their origins, the question, of course, is what would happen to the presidential campaign if this Russian connection is 100% locked down. The issue then would become whether the intention of the Russians was to actively help the Trump campaign, or simply sow discord among Democrats, and make things tougher for Americans more generally.

The latter would be bad enough, but the former could well become positively radioactive for Republicans – especially since numbers of leading Republicans (and those background Republican financiers) are having increasing difficulties standing by their man as a candidate, especially if he starts to look like “the Siberian candidate”. A candidate who is acting – even if accidentally – to the advantage of a foreign power in weakening, or warping, the American political system is not someone to give loving hug to in public or private. Either way, this will absolutely fuel the plot of at least one electronic espionage novel in the future. Move over John LeCarre, Tom Clancy, Graham Greene and Joseph Conrad.

Adding further to the complexity of this snarl has been some gentle but persistent digging into Trump campaign (unpaid) chair Paul Manafort’s longtime (and very profitable) business engagement with Russians and Russian-aligned Ukrainians, and the idea he is incentivised to be buddy-buddy with Russia. Just like Trump. It would seem that is the case, given his history with his Miss University contest in Moscow, his frequent expressions of admiration for Vladimir Putin’s strongman behaviour, and rumours that Russian oligarchs have purchased some very expensive apartments and penthouses in Trump-built buildings. (More speculatively, there are also some rumours that one of the reasons Trump has refused to release his previous years’ tax returns is that, besides showing less income than he boasts of, they will also show some rather embarrassing loans or business ties with some less than salubrious Russian oligarchs who are themselves tied to Mr Putin. But, that, of course, remains sheerest conjecture, so far.)

Then, on another one of those Sunday television talk shows, Donald Trump had what may be his very own Gerald Ford-Poland moment when the Donald explained how the Russians had their usual peaceful goals in Ukraine as he wandered all over the political landscape trying to explain away Russia’s forcible annexation of the Crimean Peninsula from Ukraine and their engagement in some serious, albeit sub rosa, military actions in Ukraine’s eastern reaches. The TV interviewer, George Stephanopoulos, along with millions of viewers, were clearly gobsmacked at the Donald’s less than keen appreciation of geography, recent world events, and the united western policy of installing economic sanctions as the price Russia had to pay for its actions in Crimea.

And now, most recently, at least some Republicans – including Senator John McCain – are starting to publicly rebuke their candidate for his verbal assault on the Khan family and other veterans and those killed in action as a bridge far too far to tolerate. Reporting on these most recent events, the New York Times wrote on Monday afternoon: “In a remarkable and lengthy rebuke of his party’s nominee, Senator John McCain  sharply criticized Donald J. trump’s  comments about the family of a fallen Muslim Army captain, saying, ‘While our party has bestowed upon him the nomination, it is not accompanied by unfettered license to defame those who are the best among us.’  Mr McCain, a war hero whose service and capture in Vietnam was also once derided by Mr Trump, had stayed largely silent over the weekend as Mr Trump’s feud  with the parents of Captain Humayun Khan brewed, waiting until Monday morning to release a prepared statement. ‘In  recent days, Donald Trump disparaged a fallen soldier’s parents,’ he wrote of the parents, Khizr and Ghazala Khan. ‘He has suggested that the likes of their son should not be allowed in the United States — to say nothing of entering its service. I cannot emphasize enough how deeply I disagree with Mr Trump’s statement. I hope Americans understand that the remarks do not represent the views of our Republican Party, its officers or candidates.’”

The paper went on to note that “Mr McCain’s family has also been critical of Mr Trump. His daughter Meghan McCain said on Twitter  on Saturday: ‘I would ask what kind of barbarian would attack the parents of a fallen soldier, but oh yeah it’s the same person who attacks POW’s.’” Other McCain family members were even less pleasant in their comments about Trump’s punch below the belt.

Will all of these pratfalls, or much worse, from Donald Trump, do any kind of serious damage to the Trump campaign juggernaut? Will his self-evident inability to learn from history, geography or even common sense finally mean he has lost the battle for the news cycle and the campaign narrative? It is hard to tell, so far at least, if that is the case, but, if his push for the presidency falters for real or even crashes and burns, this confluence of misstatements or worse will be where it all began. DM

Photo: Donald Trump delivers his address during the final day of the 2016 Republican National Convention at Quicken Loans Arena in Cleveland, Ohio, USA, 21 July 2016. The four-day convention is expected to end with Donald Trump formally accepting the nomination of the Republican Party as their presidential candidate in the 2016 election. EPA/DAVID MAXWELL