Interview: Parks Tau, the mayor who grew into his role 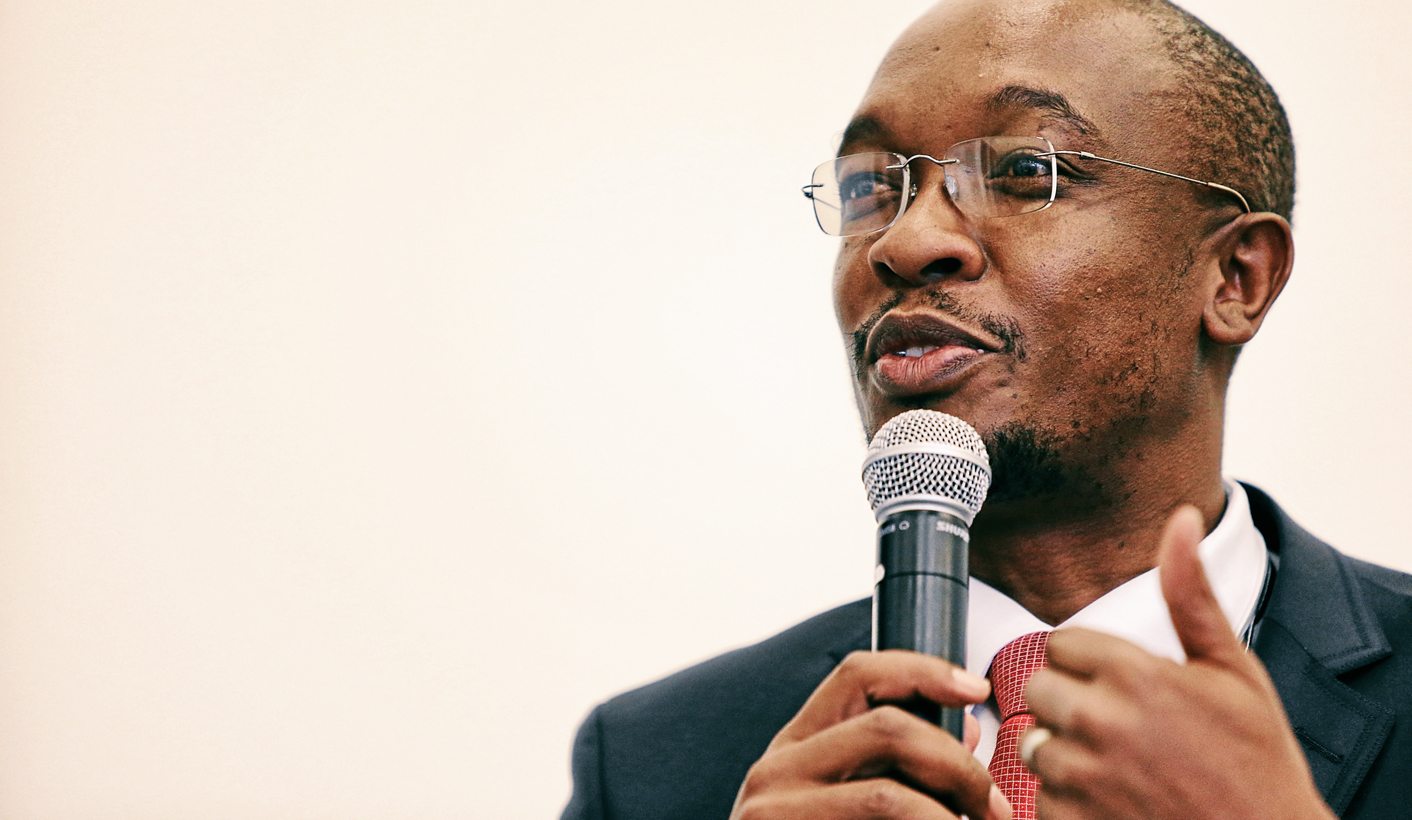 Somehow, Parks Tau has become a boss of elections for the ANC in Joburg. GREG NICOLSON speaks to the introvert who become an extrovert at just the right time.

Stepping out of his office, Parks Tau seemed taller than he looks on TV. A camera crew started packing its equipment while he waited for his next interview. On Thursday, he had already launched a housing initiative in Lufhereng and campaigned in Orange Farm. “You still have to be the mayor… It’s fifty-fifty,” said Tau, the face of the party’s campaign in Johannesburg. He acknowledged the extra pressure that comes with the ANC naming its mayoral candidates ahead of the 3 August vote.

Tau moved to a room painted green, yellow and black on the second floor of the party’s regional office in Gandhi Square as the camera crew continued to clear its equipment from his office on the sixth floor. In front of the lens he rarely fidgets, but as the afternoon light faded, away from the camera, he occasionally wrung his hands, touched his face and gazed at the ceiling while discussing why he, and the ANC, should be re-elected to run the City of Johannesburg. Tau, who is sometimes considered aloof, but more accurately might be described as a friendly nerd, was intensely composed and engaged.

Mpho Parks Franklyn Tau was born in 1970 and raised in Orlando West. His activism began when he was 14-years-old as a student at Pace Commercial College. It took him through to the Soweto Youth Congress, the Congress of South African Students and the ANC Youth League. In 1994, aged 24, he was elected as one of the Joburg ANC’s top leaders and now serves as its regional chairperson. Tau has a master’s degree and his CV is a reflection of a life committed to political activism and urban management. It’s impressive, but until recently few people knew him.

Tau, despite being mayor, maintained he is an activist. “People ask themselves who they are. My purpose in life is to contribute to society,” he explained.

When elected in 2011, he took the top job in the shadow of former mayor Amos Masondo. Tau doesn’t speak in sound bites, frequently quotes academics on city development, and is reluctant to talk about himself. To say he struggled to form an identity as mayor in his first years on the job would be misleading. He wasn’t playing the game and, outside official duties and news on the billing crisis that dominated his election, he was, largely, an invisible policy maker.

Something changed. Why is Tau suddenly more prominent? “I think it is largely as a result of increased attention on local politics and metros in particular. [It’s] also because of Joburg’s prominence as a role player in global issues, ranging from climate change, urban policy and the Sustainable Development Goals,” he said. Perhaps that’s true, but recent events have also thrust him into the public spotlight.

When a bridge collapsed on the M1 in Sandton last year, Tau camped at the site while the debris was cleared. A Sunday Independent column described it as his “Rudy Giuliani mini-moment”. The elections, and the ANC’s decision to name its mayor candidates, further pushed him to take a role outside of the city’s chambers.

Shortly before being named the party’s candidate for Joburg mayor, Tau spoke at Daily Maverick’s The Gathering. Debating the DA’s Herman Mashaba and EFF’s Floyd Shivambu, Tau was impressive. The city is constantly criticised as a failed administration that wastes taxpayers’ money and neglects the poor, black majority. Tau’s knowledge of urban policy and city initiatives, however, saw him win the debate, even though he was the least vocal candidate.

Being the biggest metro in the country, the City of Joburg is working. Depending on which side of the fence you sit, it might be working in the wrong or right direction. But Tau’s opponents made claims the city’s failing and not doing anything, while the mayor pointed to initiatives and nuances and won the debate.

Tau’s skills have been made public at the right time, while citizens demand immediate change. They say he’s doing nothing; he lists what they’re doing. They claim he can do better; he highlights the complexities of doing better and how the ANC is handling them. He’s a pragmatist with a vision coming to the fore while people are searching for trust, frustrated with the slow pace of change but wary of opposition parties.

As a student activist, Tau hadn’t conceptualised how a democratic Johannesburg might look, but he knew how it shouldn’t be. There shouldn’t be segregation and different tax bases. The ANC’s Ready to Govern document acknowledged the challenges, he said, but early governments first focused on the “pressure points” – providing housing and basic services. As mayor, Tau has tried to balance those immediate challenges with creating the building blocks for addressing the far greater structural problems facing the city and said the ANC has learnt lessons in policy, urban development and the property market to fundamentally change the city.

“Have any of the people raising issues put anything firm and concrete as alternatives to what Johannesburg is doing?” asked Tau. He said he didn’t want to judge other parties’ efforts but claimed, “They haven’t put anything on the table,” and said based on policy the ANC should take the city. While the mayor has come under intense criticism from a well-organised DA campaign he said the DA’s numbers on the city’s finances “can’t be substantiated”. He laughed at the EFF’s proposal for creating jobs through a particular type of local economic zone to boost manufacturing.

The City of Johannesburg has its problems. Unemployment, poverty and inequality define Joburg as much as the country. The billing crisis might be old news, but it’s hard to say the city is a paragon of efficiency. On multiple issues, Tau and the city have been accused of ignoring the poor while pursuing a vision for an unrealistic future. Some of the city’s purported gains have come with immediate negative effects, such as Operation Clean Sweep.

But Tau said the idea that the DA’s Cape Town does things better is false. Cape Town does not want to get into a fight with Joburg, he said, because he can note the mother city’s murder rate and its failure to spend certain grants on the poor. The DA cites its top rankings on financial management and delivering free services to the poor, but Tau doesn’t buy it. “The DA, I think, is believing its own propaganda.”

In Johannesburg, Tau is often quoted on his vision to stitch together the divided city. “I don’t think we have a choice but to do it. If we’re to solve South African problems, its social and economic challenges, we have to confront the issue of space,” he said. Considering the deep legacies of apartheid spatial planning are initiatives like the Corridors of Freedom enough? Tau said the city is implementing the policy and bulk infrastructure programmes, in conjunction with private partners, to put mixed housing developments where economic and transport access already exists and build new economic nodes in areas like Jabulani, Soweto.

He went into detail, but the key question was: “In the next generation how will Johannesburg function? Will it be an apartheid city?”

Tau’s knowledge of urban policy means he is prone to talk long-term, but one of the key issues in this election is jobs. The DA says an additional 180,000 people have become unemployed since the mayor took office in 2011. Tau dismissed the notion his administration has failed on employment, citing initiatives like Vulindlel’ eJozi, [email protected], efforts to build small and medium enterprises and others designed to help people improve their skills, like the recently launched matric rewrite programme. Considering migration to the city and the labour absorption rate, the criticism is unfounded, he said.

The mayor’s technocratic approach and late but intense ANC campaign schedule has come at the right time, but he still faces the challenge of whether voters will cast their ballots according to local or national issues. Only a few months ago the ANC was under pressure with President Jacob Zuma and the National Assembly receiving harsh criticism from the Constitutional Court over the Nkandla saga. Divisions continue after allegations of state capture and many of the political killings ahead of the elections relate to the ANC. Tau has managed to keep himself and the Joburg ANC separate from these scandals, appearing with national ANC leaders but somehow avoiding being connected to their controversies. Recently, he even asked formed president Thabo Mbeki for advice.

Asked what he is most proud of as mayor, Tau paused, reluctant to pat himself on the back. “It’s very difficult to stop thinking about things as milestones,” he said. Turning to his spokesperson, together they recalled a Nelson Mandela quote: “After climbing a great hill, one only finds that there are many more hills to climb.” It could be his slogan for re-election. The ANC is changing Johannesburg but with the many more hills ahead should it be trusted to change things fast enough?

Tau said his key challenges in office were operational efficiency and complaint turn-around times – getting the team repairing potholes to start to fix a pothole they didn’t know about but come across. His other key challenge, said Tau, is that he’s too far ahead of his team – he’s onto the next project before they’ve finished the previous one.

After we finish the interview, Tau was going into a full day of mayoral duties and campaigning on Thursday. There was Gugu Zulu’s funeral, a PSL event, and the CEO Sleepout. By getting the city to talk about his policies and vision, rather than Zuma & Co.’s challenges, and coming at the right time with brand of policy, Tau will likely win the Joburg vote, although it’s set to be the tightest race since 1994. DM

Photo: Parks Tau, Executive Mayor of Johannesburg, speaks during the workshop ‘Learning from Leading Cities’ at the Annual Meeting 2014 of the World Economic Forum at the congress centre in Davos, January 23, 2014. (WORLD ECONOMIC FORUM/swiss-image.ch/Photo Jolanda Flubacher)