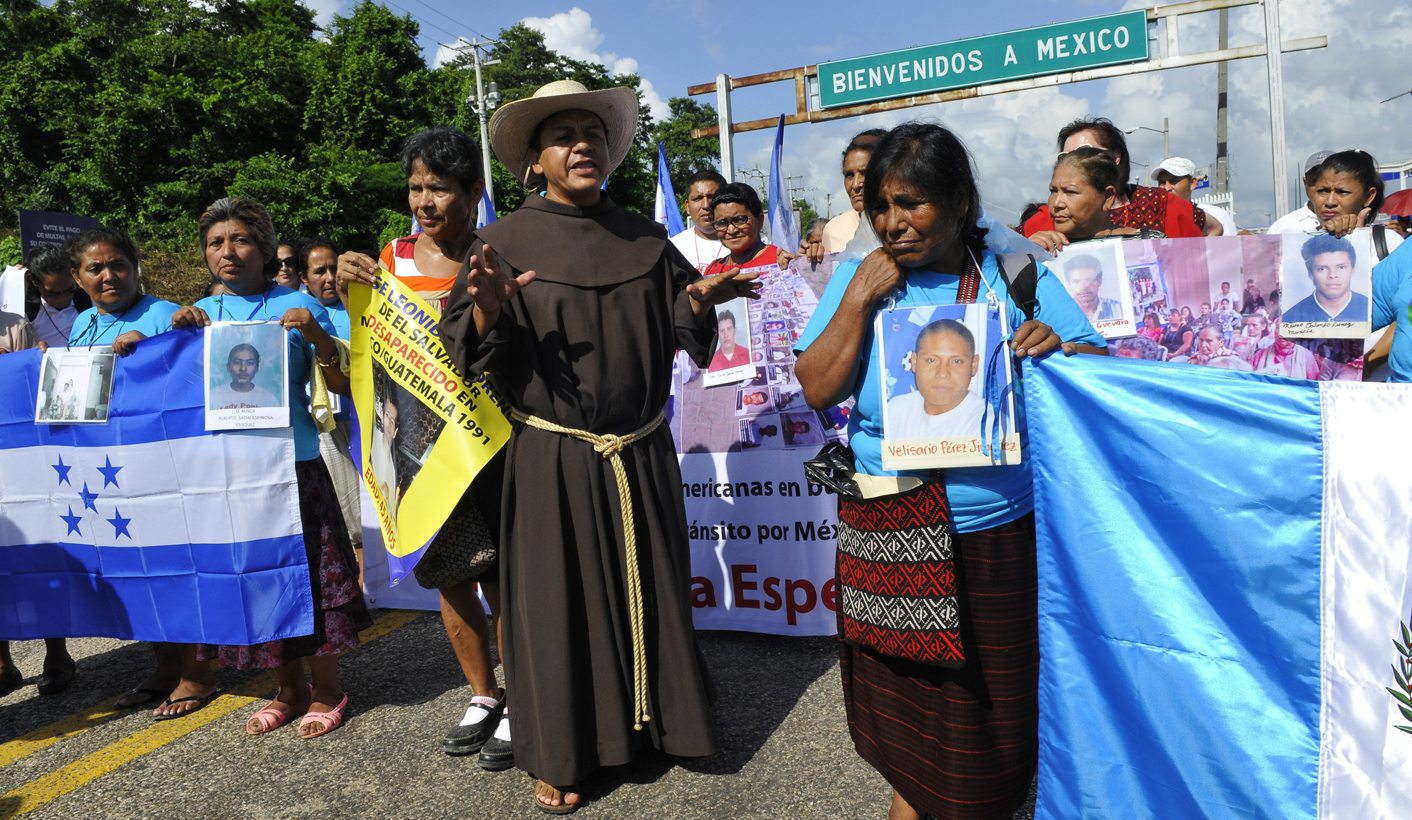 Massive deportations from Mexico and the US have failed to stem the tide of Central Americans fleeing endemic poverty combined with epidemic violence. Stepped up enforcement has diverted undocumented migration into more costly, circuitous and dangerous channels. Executive summary and recommendations by INTERNATIONAL CRISIS GROUP.

Criminal gangs and the corrupt officials who enable them are the beneficiaries of a policy that forces desperate people to pay increasing sums to avoid detention, extortion or kidnapping. Beefed-up border control inadvertently fuels human smuggling and fortifies criminal gangs that increasingly control that industry.

Governments must guarantee those fleeing violence the opportunity to seek asylum through fair, efficient procedures, while launching a major regional effort to provide security and economic opportunity in home countries. Central American leaders, especially in the northern triangle of El Salvador, Guatemala and Honduras, must in turn address chronic insecurity more effectively while monitoring and assisting those deported, especially children and adolescents, so they have an option other than fleeing again.

The humanitarian crisis of 2014, when the US struggled to cope with a surge of undocumented migrants, especially unaccompanied children, was never resolved. It was just pushed southwards. In fiscal year 2015, Mexico returned 166,000 Central Americans, including some 30,000 children and adolescents, while the US deported over 75,000. But the Mexican government’s capacity to control the flow of migrants and refugees is reaching its limit. Many see Mexico as their destination, not just the country they cross in transit to the US.

Asylum petitions have more than doubled, straining capacity to process them fairly and efficiently. Though the acceptance rate has increased in 2016, it remains inadequate to protect the men, women and children whose lives and livelihoods are threatened by the criminals who dominate many impoverished communities. Migrants from both Mexico and the northern triangle of Central America (NTCA) region have long fled poverty to seek a better life abroad, sending home remittances that are a major source of foreign exchange and a crucial prop for their home countries’ economies. However, Mexico and the US treat what is now in large part a violence-driven refugee crisis as if it were still solely an economic migration problem. Many victimised today by economic deprivation and social exclusion also face persecution by organised criminal groups, from neighbourhood gangs to transnational drug traffickers.

Forced displacement is increasingly widespread, as violence reaches civil-war levels. About 150,000 people have been killed in the NTCA since 2006, an average of more than 50 homicides per 100,000, more than triple the rate in Mexico (where killings have soared since 2007) and more than 10 times the US average.

Young people are the most vulnerable to violence, as both perpetrators and victims. The proportion of homicide victims under age twenty in El Salvador and Guatemala is higher than anywhere else in the world. No wonder that 35,000 children and adolescent migrants were detained in Mexico in 2015, nine times more than in 2011.

Those escaping violence at home are targeted again as they flee. Ideal victims, many have relatives who can be stung for ransom payments; lacking legal status, they are less likely than locals to report serious crimes like assault, extortion or kidnapping. They are also vulnerable to trafficking: the sex industry along the Mexican/Guatemalan border is largely driven by supply of migrants, especially adolescents, some of whom are held in virtual debt bondage to traffickers.

A recent study, estimating that for every reported case there were 30 hidden victims, put sexually exploited victims in Guatemala alone at nearly 50,000. Guatemala has acted against human trafficking, including creating a special prosecutorial unit that, however, lacks staff and resources to be effective beyond the capital. Mexico has specialised units to investigate crimes against migrants, including a new one in the federal prosecutor’s office, but lack of information and resources again hampers efforts.

Prosecutors should work with migrant shelters and other NGOs to encourage violent crime and official abuse victims to come forward, with guarantees of humanitarian protection and financial aid. The region already has relatively robust legal frameworks to protect refugees: the countries of Central and North America either signed the 1951 convention on refugees or its 1967 protocol and have asylum systems in place. Mexico has been at the forefront of international efforts to protect refugees: its diplomats promoted the 1984 Cartagena Declaration on Refugees, which expands the definition to those fleeing “generalised violence”.

To offer effective protection, however, capacity must be expanded to process asylum requests quickly and fairly. The countries should also refrain when possible from holding asylum-seekers in detention, which can deter those most in need – families and unaccompanied children – from seeking help. Mexico cannot shoulder the refugee problem alone; genuine regional sharing of responsibility is essential. Guatemala must also provide better safety and shelter to those in transit and combat human trafficking.

The US should step up legal, economic, medical and psychosocial support for international agencies, government institutions and local NGOs that work with refugees. Despite unabashed hostility from some political sectors to migration from Central America and Mexico, it should explore bringing more refugees, especially children, directly to the US, so they avoid a dangerous journey, and consider temporarily halting deportations of youths who risk becoming victims or members of gangs. Erecting more barriers and forcing migrants and refugees further underground has exacerbated the humanitarian crisis, strengthening the illegal networks that have turned much of Central America into a criminal battleground.

To protect the lives and rights of Central American migrants

To the government of Mexico:

1. Recognise that migrants, especially children and families, must not be returned to Central American communities where their lives and freedom could be in danger; so expand the capacity of the Commission for Refugee Assistance (COMAR) to evaluate asylum petitions, based on the 1951 Refugee Convention and 1984 Cartagena Declaration, as incorporated in Mexican law.
2. Work with the UN High Commissioner for Refugees (UNHCR) to implement protocols allowing migration agents and other government officials to seek out those needing protection, especially in border areas and migrant detention centres.
3. Provide alternatives to detention in consultation with civil society and community leaders, so families seeking refugee status can remain together and vulnerable groups – such as unaccompanied minors, women and lesbian, gay, bi- trans- or inter-sexual (LGBTI) individuals – receive adequate assistance and protection.
4. Offer “Visitor for Humanitarian Reasons” status, commonly known as humanitarian visas, to applicants for asylum, allowing them to accept formal employment and move freely within the country.
5. End the impunity of criminals and corrupt officials who target migrants by:

a) working with humanitarian agencies, shelters, and other NGOs to protect migrants who have been victims of or witnesses to violent crime, abuse or corruption, encouraging them to report crimes and serve as witnesses and informing them of their right to humanitarian parole and protection; and

b) expanding special state and federal prosecutorial units to investigate crimes against migrants, and working with shelters and human rights groups to identify victims of violent crime or official abuse; such units should also work closely with state special prosecutors for migrants and the federal organised crime unit, prioritising and monitoring the investigation of official corruption and violent crime, such as kidnapping. To the governments of Guatemala, Honduras and El Salvador:

6. Provide adequate support for and monitoring of deported migrants, especially children, including security and enhanced screening to identify and provide follow-up aid to those needing particularly education and job opportunities.
7. Work with the UNHCR to establish in-country centres in Mexico and other transit and destination countries, where those fleeing violence can petition for refugee recognition and be screened for third-country resettlement.
8. Expand prosecutorial capacity in Guatemala to investigate human trafficking for sexual exploitation, especially in border areas; and work with shelters and human rights groups to encourage Central American victims of trafficking networks to report abuse.
9. Protect trafficking victims from involuntary deportation, providing resettlement assistance and counselling when necessary; and reunite children and adolescents with their families, if feasible, or refer them to specialised institutions able to provide the required medical and psychosocial care.

To the government of the US:

10. Step up and expand in-country processing for refugee status or humanitarian parole of Central Americans with protection needs, particularly minors; explore accelerating the asylum process; and give adequate shelter to those awaiting decisions.

11. Work with the UNHCR to establish processing centres in Mexico and Central America so that those forcibly displaced can seek U.S. refugee recognition from the safety of neighbouring countries.

12. Give COMAR financial help and training, especially to expand regional offices; and set up mobile units along the border and migration routes.

13. Assist Mexican authorities and NGOs with programs to help integrate refugees, including initiatives to help them find health care, training, employment and psychosocial support, when necessary.

14. Address the push factors that impel Central Americans to leave the northern triangle by extending support for the Alliance for Prosperity for five years, with targeted programs to address community violence prevention, institutional reform and poverty.

15. Help regional governments replicate effective community-based violence prevention programs, partner with the private sector to create jobs and undertake police and justice sector reforms like those exemplified by the International Commission Against Impunity in Guatemala.

16. Halt deportation of undocumented youths by offering Temporary Protected Status (TPS) until countries of origin have effective education and job training programs; and provide resources to that end, so as to avoid sending them back to violent neighbourhoods where they risk forced gang recruitment. DM