DA’s Patricia De Lille: ‘I have set my sights on increasing the numbers’ 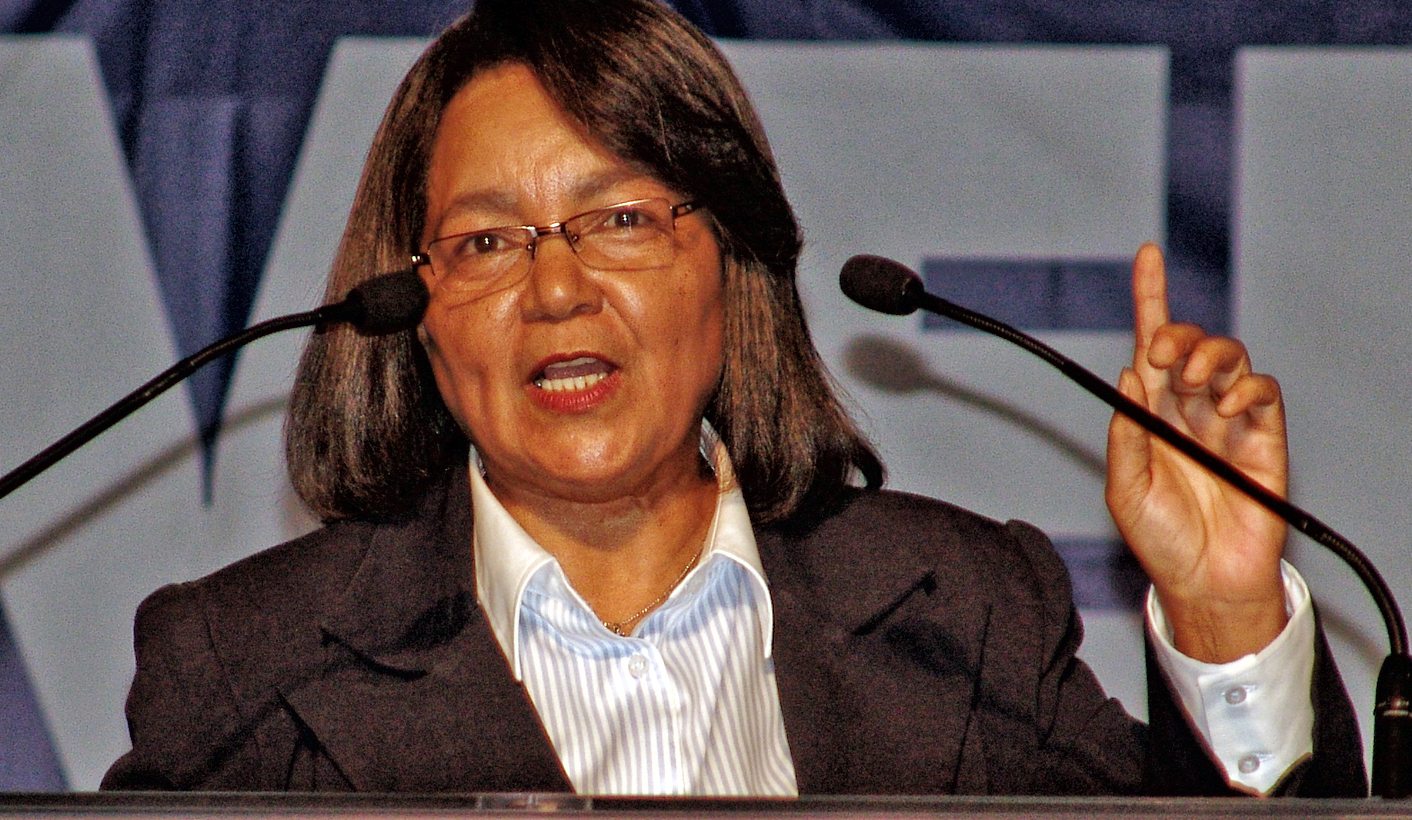 After five years in the job, DA Cape Town Mayor Patricia de Lille said her sights are set on increasing polling support in Wednesday’s municipal elections. She declined to give a percentage, but a two-thirds DA majority is tantalisingly close at just over another 5% polling support. It’s a tricky election, not just because it has been fought largely on national issues such as jobs, racism and corruption, but also because it’s the first poll during the Cape’s rainy winter. De Lille said there’s no special plan for the first 100 days in her second term as mayor, should she win. It’s a case of hitting the ground running to continue the programme. By MARIANNE MERTEN.

Patricia De Lille can haul out statistics and facts about the city she has led as mayor since the DA won the 2011 local government elections with 60.92%, or almost double the 32.8% scored by the ANC. On her first day in office then, she told Daily Maverick in an interview this week, she had decided to have at least three public engagements a week in the city. So, effectively, it’s been a five-year election campaign. And she’s proud of her self-professed vision of making a great city greater.

“It was a long and hard campaign. (But) you can see the visible change in people’s lives and living conditions,” said De Lille, who’s also the DA Western Cape leader. And she’s confident the DA will get the crosses on the ballot papers. “I don’t want to venture into numbers. I would love to see an increase, but we will just wait and see. I have set my sights on increasing the numbers.”

In a local government election every vote counts, for wards and the proportional representation councillors, and thus voter turnout is key. The DA has made arrangements for transport to make sure its supporters go to the hustings. Wherever De Lille has gone in the past month, the message has been the same: whatever your plans are for the day, first go and cast your ballots.

But despite criss-crossing the city, it’s not necessarily been an easy time in the mayor’s office. The DA’s assertion of governing the best-run city in South Africa, not only have been pooh-poohed by the ANC and several civil society organisations in the city, but also frequently in the terse debates in Parliament, a stiff 10-minute walk up from where De Lille sits in the mayor’s office.

The toilet issue (remember the poo throwers, who dumped emptied portable toilets dubbed potta-potta in public?) is continuing to get De Lille hot under the collar. The “portable flush toilets”, as she called them, were one of several sanitation options, alongside ventilated pit latrines, if the area does not allow for proper flush toilets and related sewerage infrastructure. The “portable flush toilets” are emptied three times a week, and many communities were happy with this kind of sanitation.

The city’s 2016/17- 2018/19 budget documentation shows that for the 224 informal settlements dotted around the metro, R15-million is allocated to sanitation and R4-million for water installations. The budget documentation also shows R239,740,155 earmarked to replace and upgrade the sewer system city-wide and just over R206-million for new water meters (involving four private sector funders) over the next three years.

The Cape Town 2014/15 integrated annual report shows the city provided 3,091 “sanitation service points”, or city jargon for toilets, and 948 “water service points”, or taps. Much is made about this number exceeding its targets – 2,800 toilets and 800 taps – as the annual report also touts the laying of 780km of fibre optic cables for broadband as a delivery success, among others.

De Lille acknowledged that “it’s not enough”, but proceeded to point out that Cape Town was one of the fastest-growing cities. Nevertheless, it provided “the best bouquet of free services” according to National Treasury, a department De Lille, like others in the DA, like to cite to underscore the party’s delivery track records in the metro, other councils and the Western Cape it governs.

“I set very high standards. I can’t compare Cape Town to Johannesburg or Durban. The standard we set is best practice around the world,” she said. “Cape Town is the best-run city. It’s not me saying that, it’s the performance monitoring of President Jacob Zuma and the National Treasury.”

The mayor – once a Pan-Africanist Congress (PAC) MP, who in 2003 founded her own party, the Independent Democrats, before merging that party into the DA a year before the 2011 municipal poll – also dismissed contentions that the metro was untransformed and reluctant to redress the lingering legacies of apartheid.

“I fought all my life for freedom for this country and against apartheid. To think I don’t care – it’s so preposterous and so insulting,” she said. “It’s an insult.”

The spatial inequities were not just a Cape Town but a South African phenomenon. “When the ANC governed the city, it wasn’t racism,” she said in reference to the 2004 to 2006 term of ANC Mayor Nomaindia Mfeketo, today one of two deputy international relations ministers.

And it was also an insult to say black and coloured Cape Town residents could not support the DA, which had delivered a city “that is number one in just about everything”.

When or if she returns to the mayor’s office on the sixth floor of the Civic Centre after Wednesday’s poll, De Lille plans to continue where she left off. That meant continuing to waterproof the walls and install ceilings in the remaining 37,000 RDP houses build between 1994 and 2005. It would mean continuing to ensure that development takes place in land restitution cases like that of the 300 black residents forcibly removed in 1965 from Dido Valley in Simon’s Town, where the city is set to invest R40-million in bulk infrastructure, a clinic and two parks.

The city’s transit-orientated development strategic framework is looking at creating economic hubs around Bellville Station and in Philippi in efforts which a statement from the mayoral office said “should address apartheid spatial inequality, urbanisation and the high cost of public transport”.

De Lille added that affordable housing would be built in the inner city from the proceeds of selling council land to private developers at Maiden’s Cove (this proposal is controversial because the protected Clifton Scenic Reserve would be affected) and under the ironically iconic unfinished bridges on the Foreshore.

All this was part of the city’s steps of redress, said De Lille. Proposed changes to the city administration, making four mayoral committee members responsible for service delivery across the city, aims to boost efficiency as service delivery remains a top priority.

The city’s motto for Cape Town describes it as a well-run opportunity city that cares, is safe and inclusive.

“I’m confident the voters will show: ‘Yes, we’ve made progress, but there’s always room for improvement’, and give us another five years,” said De Lille. DM