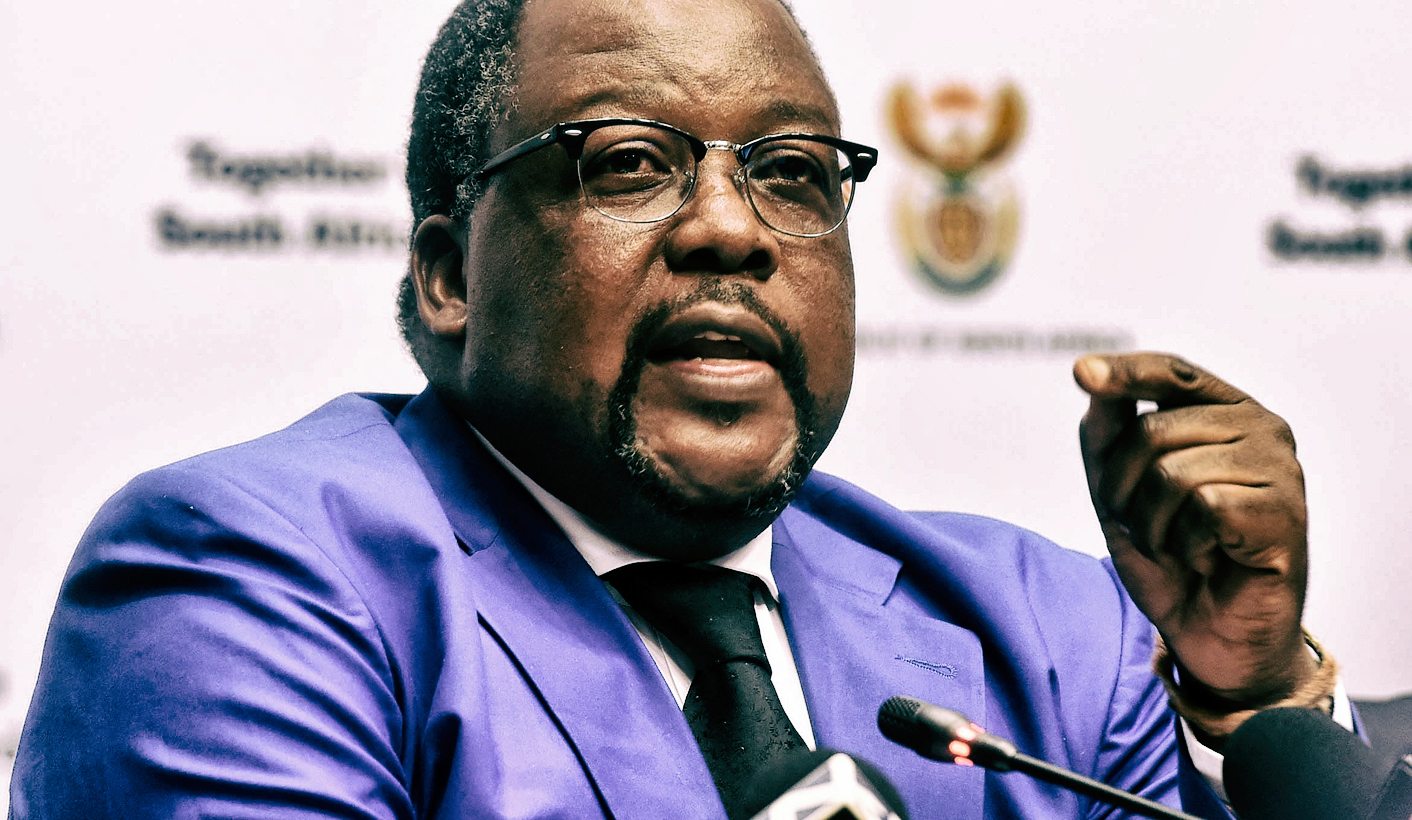 Police Minister Nkosinathi Nhleko’s Wednesday update on SAPS investigations into “so-called politically motivated” cases left unanswered what these investigations were really about. Amid concern over violence ahead of the municipal elections, and not only because of internal ANC contestation over its councillor candidates, it emerged that the SAPS was investigating 29 cases ranging from killings to assaults and arson countrywide, including 25 in KwaZulu-Natal. But even on the definition of what constitutes a politically motivated case proffered by the minister, more such cases fall outside the scrutiny of the specially-established police task team than inside. By MARIANNE MERTEN.

Police Minister Nkosinathi Nhleko explained that by politically motivated cases was meant “incidents arising out of political processes”. By any stretch of logic that should include the killing of Economic Freedom Fighters members Kenny Monjomani and Tsietsi Mthibe while electioneering at Sethokga hostel in Tembisa, Gauteng, and the attacks the EFF experienced on the campaign trail in KwaZulu-Natal in particular.

Also included on this list should be attacks that the IFP late last month said its members are subjected to, particularly in Nongoma and Abaqulusi in KwaZulu-Natal, alongside what one IFP politician called various “random confrontations” across the province.

The SAPS special task team’s investigation might also have included the several deaths in Tshwane during last month’s protests against the ANC mayoral candidate, as well as late last year’s killings of ANC councillors in Marikana, North West, and Johannesburg and at least one other potentially politically motivated killing in Mpumalanga.

Yet none of these featured on Wednesday’s official list of politically motivated cases under investigation by the special task team.

It did emerge that the SAPS is looking at the killing of the ANC deputy branch chairman Michael “Zane” Phelembe in Pienaar, Mbombela, but not other potentially politically motivated killings such as that of municipal official Moreko Mahlombogoana.

The SAPS is investigating the death of Simon Modihe at the ANC meeting at the Tshwane Events Centre – fellow ANC member Justice Mashoba was arrested, appeared in court and was released on R2,000 bail – but not any others or even public violence cases arising out of the melee outside the centre that evening ahead of the announcement of Thoko Didiza as Tshwane mayoral candidate.

While fights between the ANC and the South African Communist Party (SACP) in various places in KwaZulu-Natal are under scrutiny, incidents of violence when the ANC clashed with the EFF on the campaign trail in that province are not.

And although the killing of one former IFP member currently without a political home, as Nhleko put it, is being investigated, alongside the killing of Nkosinathi Masondo – a cousin of IFP councillor Simon Mbatha, who was the actual target – the killings of the IFP’s Alson Mzwakhe Nkosi at Abaqulusi and previous violence directed at Mbatha are not.

Instead, Nhleko, flanked by acting national SAPS national commissioner Lieutenant-General Khomotso Phahlane and Hawks boss Lieutenant-General Mthandazo Ntlemeza, announced that there were four investigations – or one each in Gauteng, Mpumalanga, North West and Eastern Cape – and 25 incidents in KwaZulu-Natal, including 14 murders and attempted murders.

While the minister said the list did not include this week’s potentially politically motivated deaths – on Tuesday Nelson Mandela Bay ANC councillor candidate Nceba Dywili was killed – it did not include the killing of two IFP members at uMtshezi (Escort) which according to the IFP happened on Friday last week.

Bizarrely, in the briefing on political killings and violence, whether so-called or not, Nhleko seemed to undermine the legitimacy of what cases the special task team has decided to investigate.

Some cases under investigation, the minister said, may not actually be politically motivated, such as one investigation in KwaZulu-Natal, where former Mpofana (Mooi River) council Chief Financial Officer Simon Mncwabe – who was shot dead – had been a state witness in a fraud and corruption case against two former agriculture department employees.

“The assassination, was it really politically motivated or (because) the gentleman in question was a state witness,” said Nhleko, later adding, “We will extract from our systems anything that may suggest a political motive…” In at least one other case cited on Wednesday, the minister indicated that a family feud seemed to have taken on political notes.

Asked why the list of cases under investigation concentrated on matters in which ANC members were the deceased, or at the sharp end of violence, when the definition of politically motivated meant “incidents arising out of political processes”, Nhleko dismissed any political bias, pointing out that in KwaZulu-Natal investigations looked at attacks on an IFP and an National Freedom Party (NFP) member. He did not express himself on the killings of EFF members, other IFP members, and some of the other ANC deaths recorded mostly in news headlines, rather than police dockets.

Political violence has a long, brutal, and well documented, history in KwaZulu-Natal over the past 30 years. Researcher David Bruce, writing in the October 2014 Institute for Security Studies (ISS) policy briefing, said about 450 political killings can be substantiated in KwaZulu-Natal.

“Part of the explanation for the persistence of this phenomenon in KwaZulu-Natal clearly relates to the growth of paramilitary forces in the province from the mid-1980s onwards and the way in which they were used for establishing and maintaining territorial control,” wrote Bruce.

In Mpumalanga there were 14 political murders between 1998 and 2010, after which there was a stark drop, wrote Bruce, although politically motivated murders were up in the North West between 2011 and 2012.

That period was one of political contestation, the last local government election and the run-up to and aftermath of the 2012 ANC Mangaung national conference. The current 2016 election is a similarly hotly contested period, with next week’s municipal poll widely described as key in the South African body politic.

Political analyst Ebrahim Fakir said political violence had become so acute and so endemic that it has become institutionalised. Speaking at a Centre for Conflict Resolution election debate last week, Fakir pointed to the speed with which the murderer of British Labour MP Jo Cox was arrested [Note: Campaigning for the European Union referendum was suspended for several days as MPs and then Prime Minister David Cameron laid wreaths where Cox was killed.]

In early June the SAPS special task team to investigate politically motivated violence was announced. It includes seven detectives, five crime intelligence officers and four members of the Hawks, and 11 from the KwaZulu-Natal taxi violence unit. It was important to draw in this taxi violence unit, said Nhleko, because “in most cases we find there are hit men utilised”.

However, Nhleko called on all political parties to adhere to create the correct atmosphere for next week’s local government elections, and to stick to the electoral code of conduct.

“If any of the negativity were to manifest, that would be a blot on our democracy.” DM