Op-Ed: Is the ANC still the bearer of Nelson Mandela’s legacies? 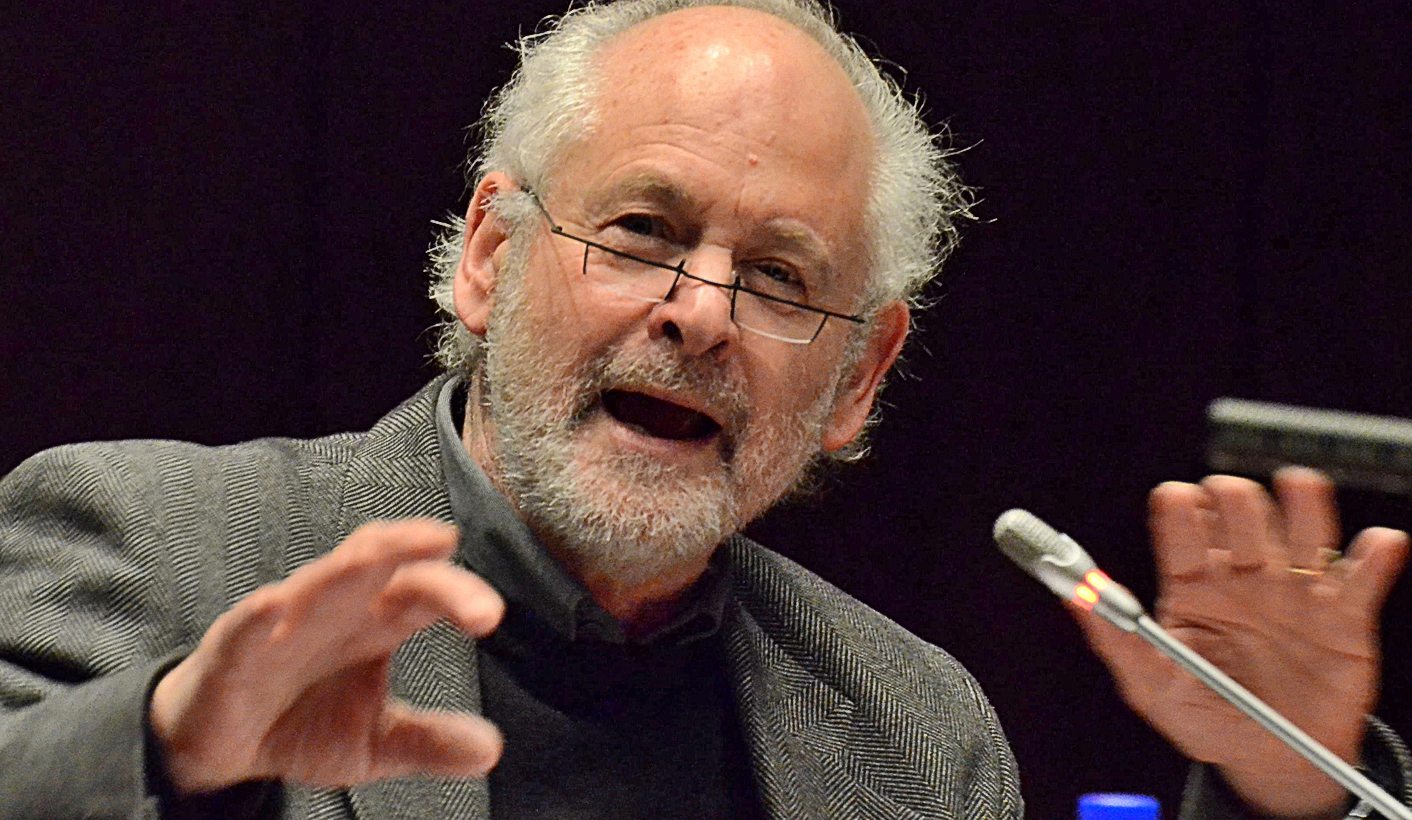 The ANC may object to the DA appropriating the legacies of Mandela, but it can no longer claim to be the bearer of the hopes and aspirations he held dear. The ANC of today is seen by many to be more concerned with patronage and personal benefits than providing a better life for all. This is not something that started under Jacob Zuma, though it has attained intensity and converged more closely with criminality in the Zuma era. By RAYMOND SUTTNER.

As I wrote this, the Democratic Alliance had just tweeted their new poster: “Honour Madiba’s dream, vote DA!”

Some years ago, this would have outraged me because I did not and still do not believe that the DA can claim to be the bearer of Nelson Mandela’s legacies. But I no longer feel that outrage.

I believed until about 10 years ago that only the ANC could make such a claim, for it was the organisation that had sacrificed so much to achieve democratic freedom. That was one of the reasons why it then enjoyed considerable support, in spite of its failings. People were prepared to wait patiently for their needs to be met by the new government because they trusted the organisation that had proved itself over time.

Whatever the mythology that may surround what the ANC did in the struggle, it had the greatest claim of all organisations to have defeated apartheid and inaugurated democratic rule. Thousands of its members and supporters, known and unknown, from well known places and from areas that still do not appear on maps, had died, been tortured, jailed, banned and banished because they fought to ensure that they, their mothers and fathers and others whom they had never met would enjoy the freedom until then enjoyed only by whites.

Indeed, they fought for more than the freedom that had been enjoyed by whites. They sought an ever-unfolding and enlarging freedom as the capacity of the state increased, making it able not only to provide necessities, but also to contribute in other ways to the achievement of richer and more fulfilling lives.

Many of those who paid a price for democracy remain in the leadership of the organisation or are Cabinet ministers or parliamentarians, all charged with implementing the vision of freedom that many cherished in 1994.

Why is it that the organisation to which Mandela devoted his life now faces possible electoral defeat in a metro named after him, as well as in key areas like Tshwane and Johannesburg? Why is it that ANC organisers are chased out of former ANC strongholds in the Eastern Cape and forced to abandon their canvassing in other areas? Some of these are places where popular power thrived in the mid 1980s. Why do many black people now view the ANC with a cynicism previously reserved for the DA, National Party and similar organisations?

Why is the ANC so widely discredited today? After unbanning in the early 1990s it remained an organisation in which debate thrived and energies were not so heavily consumed with the election of candidates for positions as they are today.

There were important elections such as that which saw Walter Sisulu become ANC deputy president to avoid a contest between Thabo Mbeki and Chris Hani, who were then seen to represent two distinct approaches to the transition. But this was a time of debate. Indeed, during that 1991 conference, Thabo Mbeki convinced the delegates in the middle of the night to abandon sanctions. I was one of those who opposed what I considered to be a “concession to the enemy forces”, but I remember being convinced by his solid and eloquent reasoning. There were countless other debates between those who, in the early 1990s, favoured popular power as opposed to elite arrangements. Among many other contested issues, some favoured socialism as opposed to a capitalist path of development.

There were decisions to be made at various times about whether to compromise on one or other matter during the negotiations, such as the massacres at Bhisho and Boipatong, among others. The organisation was highly politicised in the cities, villages and townships.

The ANC of today is seen by many to be more concerned with patronage and personal benefits than providing a better life for all. This is not something that started under Jacob Zuma, though it has attained intensity and converged more closely with criminality in the Zuma era.

The Tshwane violence is illustrative. The outbreak after the announcement of Thoko Didiza as mayoral candidate related less to her personal character, whether or not she had resided in Tshwane or her political credentials than the uncertainties that arose from there being a new candidate. Her newness created instability related to patronage networks. It was known who would profit from the incumbent mayor Kgosientso “Sputla” Ramokgopa and that contending forces would benefit from the ascension of his deputy, Mapiti Matsene. Didiza’s candidacy confused the expectations of both sides.

That ANC politics has gradually become more and more clientelist is also evident from other bitter contests for ANC and council positions and the resultant killings mainly in KZN, but also in other provinces. These murders do not concern ideological differences. No one has uttered a word about any political stance dividing candidates. Nor does this account for over 50 former KZN councillors now standing against the ANC as independents.

The battle for positions, whose intensity has boiled over into killings, relates almost entirely to spoils. The organisation of Mandela, Oliver Tambo, Sisulu and other giants has become consumed by the need to acquire and safeguard wealth and positions at the highest level. At lower levels, individuals see the organisation as a key pathway to some measure of economic security in a time of high unemployment and poverty.

That means that the organisation, by virtue of its ties to the state, remains important to many people’s lives. Its power may be recognised, but that is not the same as to enjoy the respect that previously attached to the ANC as a party of liberation.

Gradually the ANC has severed its connection with its own base. Those who sacrificed in the struggle gave up their youth, bound themselves to an arduous and personally exacting path in order to lift the hardships that bent the backs of the oppressed, from among whom many of them came. They had a connection that could not be broken by torture, imprisonment or enemy guns. Indeed, in the face of this enemy, freedom fighters prided themselves in facing danger with dignity. They were determined never to cower or fall on their knees before the oppressor.

That connection to the oppressed and the sense of personal pride and dignity has been eroded.

The SACP and Cosatu – as well as crooks and gangsters – built unity around the need to remove Thabo Mbeki because of the conservative macroeconomic policies he promoted and the alleged centralisation of his leadership. This was the official left version. But a range of shady characters and sections of capital who thought they would benefit more under the leadership of Jacob Zuma joined them, and many of them have benefited greatly!

The left, who were the prime ideologues behind Zuma’s rise, were well aware of the flaws in his character. Evidence in the Shabir Shaik trial made it clear that his honesty was questionable. The rape trial showed that he was attached to hyperpatriarchal and homophobic notions, cultural chauvinism (“100% Zulu”) and militarism.

But the left, SACP and Cosatu joined with Zuma in singing “Umshini Wam” (bring me my machine gun) outside the courtroom. The gun can be taken to symbolise the militarism marking the threat of force and ultimately the violence of the years that followed. But it is also a phallic symbol and the song can be interpreted as imitating the rape he claimed not to have committed.

Knowing that Zuma had left the SACP in 1990, they nevertheless depicted him as having qualities, including being close to the people and even socialist in inclination. In concealing the dangerous qualities of his character and presenting him as what he was not, they performed what would be called fraudulent misrepresentation in the law of contract (selling a product as having qualities it did not in fact possess).

In the years that followed, we have seen use of force – first against COPE in the 2009 elections, then in Marikana and other places under the slogans “kill for Zuma” and “shoot to kill”, and then other injunctions disrespectful of the need to avoid violence and loss of life in a constitutional democracy.

We have also seen massive misuse of funds. The most publicly visible case has been the Nkandla scandal. Many former heroes of the struggle, in their eagerness to please Zuma or to retain their positions or to gain other positions, voted for what was found to be illegal and unconstitutional. In some cases they provided pseudo rationales to explain away the undermining of constitutionalism. This did not merely undermine legality in a constitutional order where human rights are now advanced; it also robbed the poor for whom much of the money used to enrich the President at Nkandla was intended.

How can individuals who were prepared to forego their own integrity and self-respect in this way expect the public to respect them? If they abandoned their personal dignity in the face of an ANC caucus decision to back illegality, how can they expect the poor, whose welfare was compromised by Nkandla, to respect them?

The ANC may object to the DA appropriating the legacies of Mandela, but it can no longer claim to be the bearer of the hopes and aspirations he held dear. It is doubtful that the ANC can now regenerate itself, but I am disinclined to make predictions about the future of the organisation.

What is important is for those values to be recovered and our freedom to be advanced. This is not short-term work. It will take time. It requires organisation by a range of social forces, located in a range of sectors. Those of us who cherish freedom dare not abandon that dream and need to find ways of making it an unfolding reality. DM

Raymond Suttner is a scholar and political analyst. He is a former political prisoner for activities in the ANC-led liberation struggle. Currently he is a professor attached to Rhodes University and UNISA and his most recent book is Recovering Democracy in South Africa (Jacana and Lynne Rienner, 2015). He blogs at raymondsuttner.com and his twitter handle is @raymondsuttner