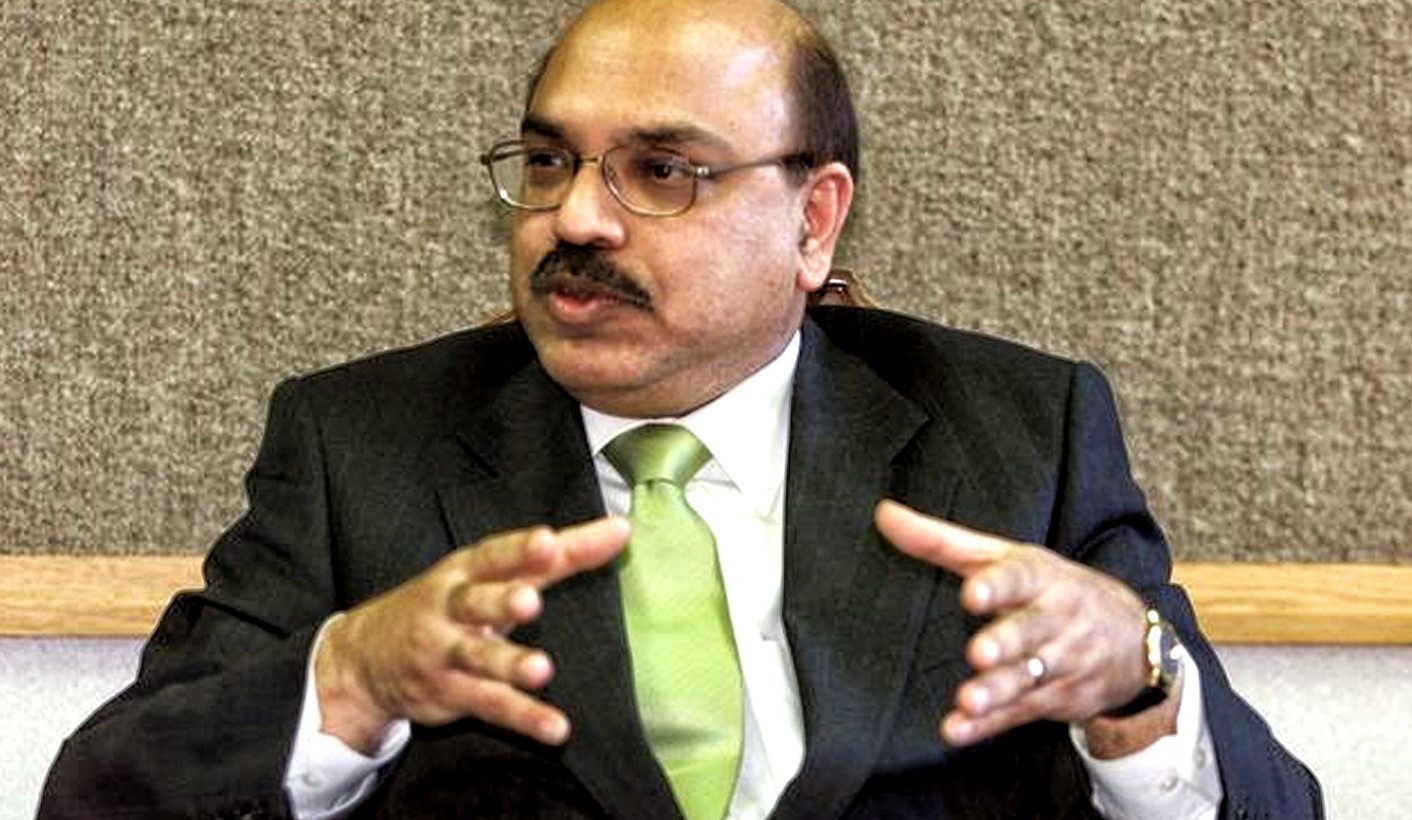 Public Protector Thuli Madonsela was Jacob Zuma’s accidental gift to the citizens of South Africa. Madonsela was an unknown entity before she was nominated for the position by the NGO South African Women in Dialogue. She was appointed in 2009 just as No 1 slipped into the hot seat and the first workmen arrived to renovate Nkandla. Madonsela has demonstrated the independence and power of the Chapter Nine institution, which is why whoever fills her shoes should be a candidate with an impeccable moral compass capable of upholding the new standard set by Madonsela. By MARIANNE THAMM.

Until she blipped onto the public radar in 2009 after she had been nominated by Martha Muller of SA Women in Dialogue to succeed the then controversial Public Protector, Lawrence Mushwana, Thulisile Madonsela was, to those who did not know her personally, an unknown entity.

Seven years later she departs in a blaze of glory, having fulfilled the constitutional mandate of the office and elevated it to one of the most high profile and effective Chapter Nine institutions in the country.

One of the victories that will be linked to her tenure is her investigation into the abuse of the public purse in the renovation of President Jacob Zuma’s private home at Nkandla.

That case too led to the later Constitutional Court ruling that remedial action by the Public Protector is binding and not mere recommendations providing future legal certainty.

Madonsela has been so effective that she has irked many powerful people but is, however, generally revered by the public. Those who wish to discredit her have charged that she a “CIA agent”. She has even found herself in the cross-hairs of the Hawks under its current (and discredited) head, Lieutenant-General Mthandazo Ntlemeza.

Madonsela has stared down every challenge with grace, candour and poise.

Her predecessor Lawrence Mushwana’s tenure was mired in controversy of a different kind. He was consistently accused of protecting the ANC, called a “spineless liar” by former justice minister Penuell Maduna and director of public prosecutions, Bulelani Ngcuka, and had his report on the 2005 “Oilgate” scandal (when R11-million was paid to the ANC by oil company Imvume) overturned by the Gauteng North High Court.

Because the position of the Public Protector is such a vital one, the NGO Corruption Watch embarked on a public awareness campaign around the nomination and appointment of the new protector.

The campaign, titled Bua Mzanzi, aims, says the organisation, “to ensure that every step of the appointment process takes place in the public spotlight, to safeguard the independence and integrity of the Office of the Public Protector”.

Fourteen candidates have finally made it to a shortlist and a parliamentary ad hoc committee will decide on who to put forward as a suitable candidate. The committee is expected to report to Parliament by 31 August. The ANC will have a majority of representatives (six) while the DA will have two, the EFF one, with two representatives from other parties.

The Act also states that the nominee should be a High Court judge or admitted as an advocate or an attorney and who has practised as an advocate or an attorney for a minimum cumulative period of 10 years after being admitted. The nominee could also have lectured in law at a university for a period of 10 years or have experience in the administration of justice, public administration or finance, also for at least a decade.

While the Public Protector’s investigations are not limited to any one sphere it is where the office interacts with government that it is required to be unwavering. In that sense then it is important to scrutinise the candidates who have been nominated by the ruling party which enjoys the most significant political power and influence. The new Public Protector will be required to be as fearless and ethical when it comes to dealing with the majority party as Madonsela has been.

The ANC has nominated two judges, Judge Sharise Weiner and the more controversial Judge Siraj Desai who is regarded as the current front-runner in the race. Judge Desai, who was chairman of the Cissie Gool branch of the ANC until 1995 and his appointment to the bench, was nominated by Advocate Denzil Potgieter SC, Cape Town attorney Mogamat Igshaan Higgins and Advocate Joel Krige.

His was the first name the ANC proposed when the ad hoc committee met earlier this month so it stands to reason that he is the party’s preferred candidate.

But is he fit and proper?

While Desai’s career has, like many judicial officers, had its high- and low-lights, the biggest and most serious blot is that in 2004 Desai lied after a woman, who had worked for a South African HIV/AIDS organisation and who had attended a World Social Forum in Mumbai, charged him with rape. Desai had attended the conference as vice-chair of the Human Rights Foundation in South Africa.

Police in India arrested Desai and held him in police cells after the young woman had laid the charge. Desai had originally denied the allegation stating publicly and categorically that he had never had sex with the woman.

Only later, after she had produced evidence, did the married judge admit that he had indeed had sex with the woman. He insisted, however, that it had been consensual. While this was consistently denied by the complainant, an Indian court eventually found Desai not guilty of rape.

What is at issue here is not that Desai was charged or that he was acquitted but that he had lied about having sex with her at all. While the scandal took place more than 10 years ago it is revealing in that Desai had resorted to lying until he had been caught out. Instead of apologising for the lie he instead attempted to explain the nature of the sexual encounter.

In 2006 Judge Desai became embroiled in another controversy, this time involving controversial Western Cape Judge President John Hlophe. The matter pivoted on a “retainer” paid to Hlophe by the property development firm Oasis Asset Management Group, a frequent litigant in the Cape High Court. (Ironically, it was Desai who had introduced Hlophe to the Oasis Group in the first place.)

Later Desai, in attempting to prevent the group from purchasing a property in University Estate where it sought to locate its headquarters, had allegedly defamed the investment company at a public meeting. Oasis had approached Hlophe to ask for permission to sue Desai. The matter, where a judge faced defamation claims and his judge-president could be called to testify, was unprecedented in South African legal history.

In the end Oasis dropped the defamation charge.

The DA has unsurprisingly objected to Judge Desai’s nomination, claiming that he had a record of “highly political judgments”.

Another ANC nominee to succeed Madonsela is Mushwana’s former deputy, Mamiki Thabitha Goodman, who had accused Mushwana in 2006 of sexual harassment. It was an ugly spat that played out in the media.

Goodman, however, remained deputy Public Protector until another public run-in in 2012 when she accused Madonsela (among other things) of withholding a report on the DA-led Midvaal municipality until after the 2011 local government elections.

Goodman was eventually called to testify before Parliament’s justice portfolio committee but could not substantiate any of her claims against Madonsela. Goodman had told the committee that Madonsela had sidelined and bullied her.

At the time she had said that her relationship with Madonsela was so acrimonious that “To tell you the truth… [she is] somebody I wouldn’t want to work with, or even be friends, after the 30th [of November 2012]”.

Ultimately committee members had found Goodman’s unsubstantiated allegations “petty”. Goodman’s acrimonious history with her predecessors points to an individual who might not be suitable to face down and slay the dragons that will surely come her way should she be the next public protector.

Another ANC nomination is that of the deputy director of public prosecutions, Willie Hofmeyr, who was put forward by ANC MP Nic Koornhof. Hofmeyr previously headed the Special Investigating Unit and the Asset Forfeiture Unit before he was shunted by current NPA head Shaun Abrahams to the legal department of the NPA.

Hofmeyr’s CV begins with “he has top secret security clearance. He has been arrested 40 times, but has no criminal convictions apart from paying an admission of guilt fine of R50 after an illegal protest march by UCT students after the 16 June student uprising in Soweto”.

Hofmeyr has a long history as a loyal ANC member and found himself in the eye of the storm with regard to the decision by then Director of Public Prosecutions Mokotedi Mpshe’s decision to withdraw fraud, corruption and racketeering charges against Jacob Zuma. Hofmeyr had understood the political currents that swirled around the “spy tapes” that were used as an excuse to drop the charges, which the Constitutional Court has now ruled must be reinstated.

Another ANC nominee and member is Sheriff of the Bellville High Court, Advocate Nonkosi Cetywayo, who formerly worked in the Office of the President between 2008 and 2009 and was the Secretary of the ANC Women’s League in Langa. It was Cetywayo who headed the Office on Institutions Supporting Democracy which submitted a memorandum with a 15-page dossier of anonymous complaints from the concerned staff members against Madonsela to the parliamentary oversight committee on justice and constitutional development. This is the same committee that heard Goodman’s accusations.

Jacob Zuma’s destructive term of office as President of South Africa is set to end in 2019 – so we have potentially three more years under a Zuma administration.

The new Public Protector, whoever she or he may be, is certain to be saddled with one of the biggest investigations ever – that into the President’s friends the Gupta family’s alleged capture of the state.

Madonsela, in an unprecedented move, asked Minister of Finance Pravin Gordhan for extra funding to expedite the investigation. Gordhan approved an additional R1.5-million for the task.

Afterwards Madonsela said she had wanted to probe “specifically whether or not the government of South Africa and specifically the president unlawfully allowed the Gupta family to choose ministers and other occupants of high office”.

It is imperative then that an individual who is not politically embedded and who is capable of seeing through this “Guptagate” investigation be appointed to look after the interests of the citizens of South Africa and not political principals. It is bound to be a highly politically charged investigation and the less tethered and beholden the Public Protector, the better for South Africa and democracy. DM