ISS TODAY: As Mugabe fights for his political future, why is China so silent? 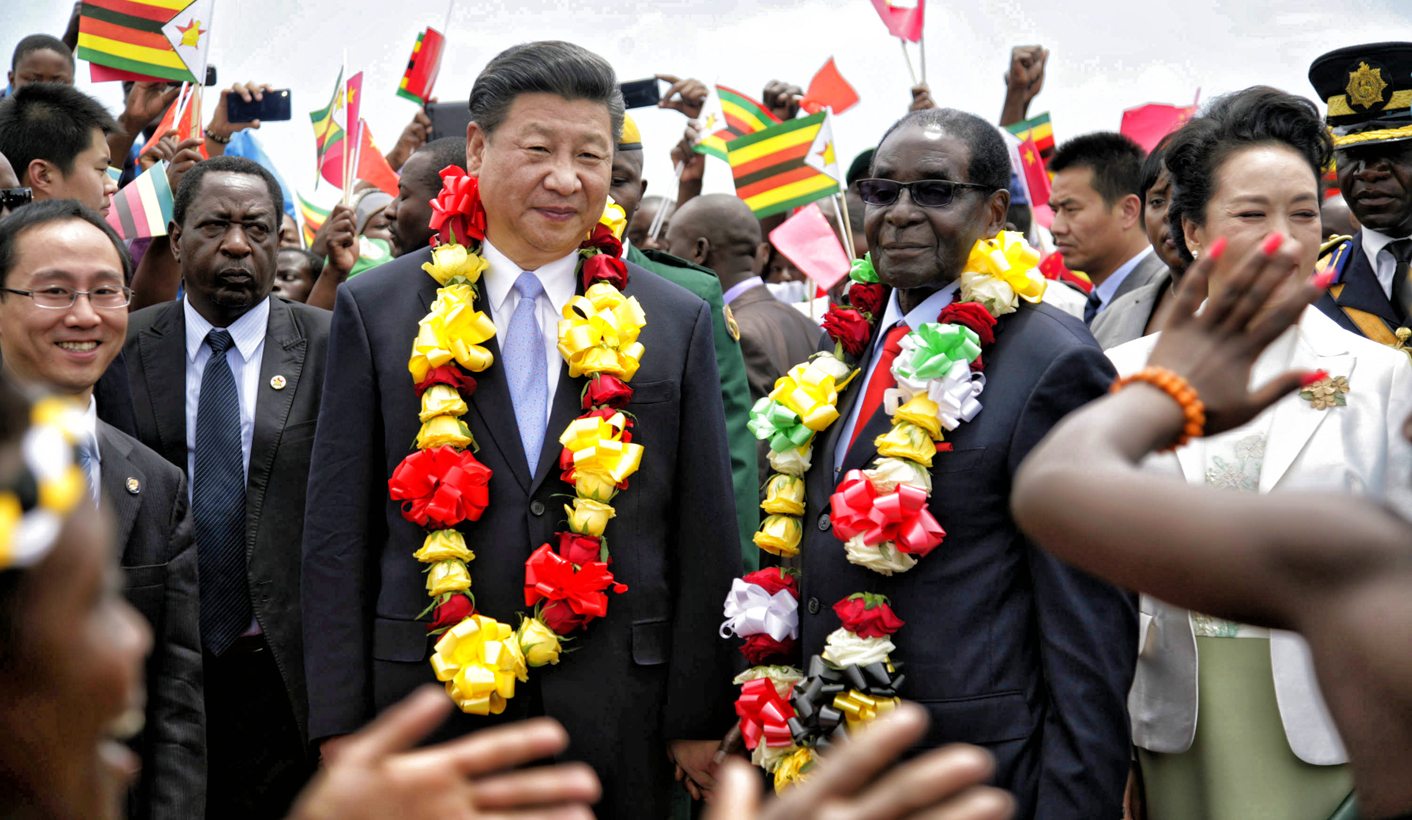 As Zimbabwe teeters on the brink of economic and political crisis, there’s one voice that has been conspicuously silent: China. Despite the mutual professions of admiration and everlasting friendship, it seems that President Robert Mugabe has been abandoned by his Chinese counterpart in his hour of need. By SIMON ALLISON for ISS TODAY.

It wasn’t meant to be this way.

At last year’s China-Africa forum in South Africa, Robert Mugabe described Chinese President Xi Jinping in glowing terms: “Here is a man representing a country once called poor, a country which was never our coloniser. He is doing to us what we expected those who colonised us yesterday to do… We will say he is a God-sent person.”

Mugabe has good cause to be grateful to Xi, and to China, which has been a staunch ally over the years. Infamously, in 2004, ignoring the spate of political violence and human rights abuses in Zimbabwe at the time, China’s Deputy Commerce Minister Fu Ziying observed: “It’s apparent that his Excellency has been very good.” This quote is typical of the kind of whole-hearted support that China has offered the Zimbabwean president over the years.

Not only has China turned a blind eye to Zimbabwe’s assorted governance issues, but it has also been an important economic partner. As well as being the biggest importer of tobacco, Zimbabwe’s largest cash crop, recently China forgave some $40-million in debt. Even more significantly, last year the Asian superpower promised to plough about $4-billion into the stagnant Zimbabwean economy through a series of “megadeals” in energy and infrastructure.

But maybe these ties were never as impressive as they looked on paper. Take the debt forgiveness: while a nice gesture, it is meaningless in comparison to the $1.8-billion that Zimbabwe owes the International Monetary Fund in arrears (against total international debts topping $9-billion). And while those megadeals may sound impressive, they have so far failed to get off the ground, for the most part – even though Zimbabwe’s stuttering economy could use an injection of cash right about now.

Zimbabwe is facing a potentially crippling liquidity crisis, with banks restricting cash withdrawals and government imposing ever-tighter restrictions on foreign exchange. The country’s economic woes are driving increased political instability. #ThisFlag, a citizen-led campaign for government reform, is gaining unprecedented traction, while calls for Mugabe to resign or be removed from office are getting louder and louder, especially in urban communities. Sources within his ruling party, Zanu-PF, suggest that the 92-year-old leader has also lost support of key players within the party.

What Mugabe needs right now, more than anything, is a bit of help from his friends – preferably in the form of a timely cash injection. But none has been forthcoming from China.

This comes as no surprise to long-time China-Africa observers. “One should make a distinction between rhetorical and financial support in the China-Africa relationship. Just because China rolls out the red carpet and reiterates a friendship between the countries doesn’t necessarily mean they are willing to lend support in other ways,” explained Cobus van Staden, a lecturer at the University of the Witwatersrand and co-host of the influential China in Africa podcast.

This is especially true when it may not be in China’s financial interest to do so, according to Ross Anthony, Interim Director of Stellenbosch University’s Centre for Chinese Studies. “China seems to be getting donor fatigue when it comes to Zimbabwe. Although Xi Jinping had a state visit last year… investing in Zimbabwe has become an increasingly risky enterprise for Chinese firms.

“Although originally exempt from Zimbabwe’s indigenisation laws, Chinese diamond mining firms, for instance, have come under increasing pressure to relinquish a 51% stake to local actors. Additionally, Mugabe’s continued hold on power, and the political uncertainty it is causing, has implications for Chinese investors banking on long-term stability of their interests,” said Anthony.

Anthony also emphasises that China’s support for Zimbabwe should not be confused with support for Mugabe himself. “From a financial point of view, it may make sense to simply hold back and let internal political changes take their course,” he said. And this appears to be exactly what China is doing.

China has more than just money at stake in Zimbabwe, however. “China’s extensive investments in Zimbabwe’s crisis-ridden economy and rhetorical support for Mugabe’s isolated regime are crucial to its broader strategy for expanded influence in Africa. If China can engineer a marked improvement in political and economic conditions in Zimbabwe, it will be able to profit economically from a country that Western powers have very limited leverage over and set a precedent for other sub-Saharan African countries to pivot towards China,” explained Samuel Rabani in The Diplomat.

In this context, China’s current lack of support for Mugabe might suggest that he is now viewed as actively detrimental to China’s interests in Zimbabwe.

China’s controversial policy of non-intervention in the internal affairs of African states has made them a favourite ally for autocrats and dictators across the continent (although, increasingly, this policy is coming under pressure, most notably in South Sudan where China contributes peacekeeping troops and is mediating tensions).

But as Mugabe is finding out, non-intervention is a double-edged sword: just as China won’t intervene against him, it won’t intervene for him either. This should serve as a warning too for other African leaders who have grown accustomed to taking Chinese support for granted. DM