Hlaudi’s Kill Bill: The slippery slide towards manipulating the news 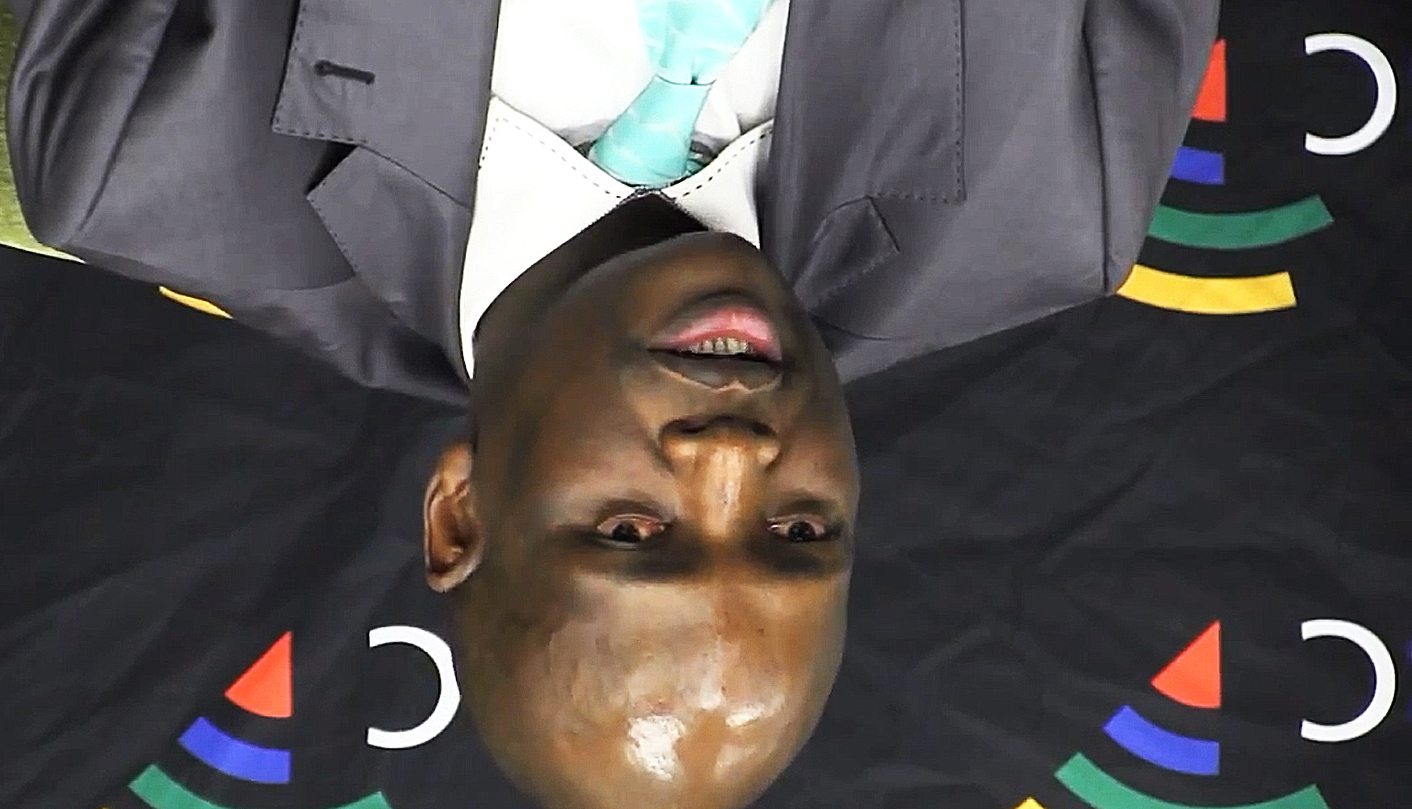 In another act of defiance of due process and the law, the management of the SABC has terminated the employment of seven of the eight journalists who stood up against censorship at the public broadcaster. Another journalist has resigned, citing what he calls SABC COO Hlaudi Motsoeneng’s “venomous tentacles” gripping the organisation. While journalists are bearing the brunt of Motsoeneng’s reign of terror, it is difficult to measure how much distortion there is of the news across the SABC’s platforms and how this is impacting on the public mindset. By RANJENI MUNUSAMY.

SABC chief operating officer Hlaudi Motsoeneng appears to be on a mission to prove he is a law unto himself. He has disregarded a Public Protector’s report that found that he had fabricated his matric qualification and increased his salary irregularly, as well as a high court ruling that his appointment was irrational and unlawful. He has shown the broadcasting regulator Icasa his middle finger after it issued an order compelling the SABC to overturn its decision to ban footage of acts of violence during protests.

An application has been made to the Constitutional Court on the SABC’s editorial policy and the suspension of eight journalists who spoke out against the increasing censorship at the public broadcaster. Disregarding this process, the SABC has sent letters of dismissal to seven of the eight journalists. Lukhanyo Calata, Foeta Krige, Suna Venter, Krivani Pillay, Busisiwe Ntuli, Jacques Steenkamp and Thandeka Gqubele were informed that their employment had been terminated with immediate effect. Union representatives for some of the journalists have already indicated they would be challenging the dismissals in the Labour Court as due process according to the Labour Relations Act had not been followed.

The letter to Calata, the SABC’s parliamentary correspondent, read: “It has now become clear to the SABC that you have no intention to refrain from your conduct of undermining the SABC and the authority of its management. In the premise your continued acts of misconduct have become intolerable. Your employment with the SABC is thus terminated with immediate effect.”

The eighth journalist, Vuyo Mvoko, who is employed as a contributing editor on contract, had not received any correspondence from the SABC by Tuesday evening. Another journalist, Ivor Price, announced on Twitter that he had resigned. Price, a news anchor on SABC2 and presenter and producer for the Afrikaans radio station RSG, said he resigned last month on the day journalists across the media industry protested outside the corporation’s offices in Johannesburg and Cape Town. He said he could no longer remain silent after he saw that his colleagues had been dismissed.

“Motsoeneng’s venomous tentacles have the entire public broadcaster in their grip‚” Price said. “Even if he resigns tomorrow or is fired‚ it will be a long time before good journalists will get over the incapacitating fear.”

Breeding a culture of fear and compliance does appear to be the intention of the management of the broadcaster. Motsoeneng, backed by the SABC board, has been determined to show that he had been unfazed by the developments in reaction to his change of the editorial policy, including the resignation of former acting CEO Jimi Matthews, the Icasa ruling, the protests by the media fraternity and the South African Communist Party (SACP), the harsh criticism from ANC communications subcommittee chairman Jackson Mthembu and the Constitutional Court application by the former SABC journalists.

While efforts are under way to challenge the policy and the dismissals, Motsoeneng remains firmly in control of the SABC and its news coverage. Media Monitoring Africa is currently conducting research into how the SABC’s new editorial policy is impacting on how the news is told. In addition to the banning of coverage of acts of violence during protests, journalists have also been directed to report more positive news and not to direct difficult questions  to President Jacob Zuma.

It is not easy to monitor what goes out 24 hours a day on 19 radio stations and four television stations and whether there is a distortion of the news. Because of the vastness of the corporation, it would also be difficult for Motsoeneng and the editors who support him to keep a check on whether journalists are complying with their instructions on all the stations.

Media Monitoring Africa director William Bird says there are different ways in which news coverage can be impacted upon by the editorial policy and stance of the SABC management. He said censorship had been obvious in the SABC’s reportage of the violence in Tshwane last month when ANC supporters went on the rampage in reaction to the announcement of Thoko Didiza as the party’s mayoral candidate. While the protests were covered by the SABC, there was no footage of buses being burnt and damage to property.

He said the information his organisation had received was that journalists were being scared off from doing stories that were critical of the ANC. Media Monitoring Africa was also assessing the coverage of the local government elections campaign and whether the SABC had an unfair bias towards the ANC.

“There might not be a Fox News-style level of bias but certainly diversity is getting narrower. The idea might not be to overtly distort the news but to basically control the narrative,” Bird said. Coverage of the Public Protector might also be affected. According to Bird, journalists at the public broadcaster were told they should “not give airtime to that woman because she hates the SABC”.

The Right2Know campaign’s Micah Reddy said there were many journalists at the SABC still trying to do their jobs fairly in spite of the stance of management. He said reporters were covering protests against the SABC censorship and radio journalists still sought comment from organisations such as his over developments at the broadcaster.

It appears that television news bulletins were being more tightly controlled, particularly on matters related to the SABC. For example, when the SACP staged a protest against censorship at the SABC earlier this month, coverage was disproportionate in favour of a counter demonstration by supporters of Motsoeneng, including local artists. Reddy said some editors who were in Motsoeneng’s corner were also dispatching less experienced journalists on stories so that the narrative could be controlled.

The firing of journalists has raised alarm bells, with Amnesty International describing this as a “cynical and sinister ploy to entrench fear”. But equally insidious is whether there is a deliberate agenda to alter public perception, particularly during an election period. International experience certainly does show that this is the agenda behind the clampdown of the media, particularly the airwaves, under repressive regimes. There is no indication, however, that the South African government or the ANC has instructed the SABC to distort or censor the news.

But in Turkey, for example, where the independent media has been under attack and virtually wiped out, there has been a deliberate falsifying of the news to control public perception. In an article in Turkish Review, editor-in-chief Kerim Balci said that the takeover of media organisations has long-term impacts on the industry and democracy in that country.

Newspapers like Zaman, which was the largest circulation newspaper in Turkey, and the English medium Today’s Zaman were taken over by the government and several of their editors arrested. These newspapers acted as training grounds for young journalists but the takeover saw massive drops in circulation and closure of journalism training projects. Cihan, Turkey’s largest private news agency, was the main source of information for the opposition media and English, Arabic and Russian media outlets. It has now been converted into a pro-government agency.

“Cihan is now exchanging forged stories about the Turkish economy, Turkish leadership and Turkish politics with the world. Agencies working with Cihan will either lend an ear to the ‘Turkey the Wonderland’ stories they are being told, or will give up their interests in Turkey altogether. Neither of the end results are desirable,” Balci said.

Closer to home, media organisations in Zimbabwe, particularly the state broadcaster ZBC, have long been used to distort the news in favour of the government and to demonise the opposition and civil society organisations. The Herald, once an influential newspaper, has declined in readership because of its pro-government stance and the ZBC is an overt propaganda instrument of the state.

Such a situation is not desirable for anyone in South Africa, particularly the ANC, which enjoys legitimacy as a democratically elected government. It is therefore puzzling why the ANC has not acted decisively to stop Motsoeneng’s ruinous reign at the SABC. On Tuesday, the ANC would not even comment on the firing of the SABC journalists. When approached by News24 to comment on news that the SABC had fired its employees for “disrespecting” and “undermining” its management, ANC spokesperson Zizi Kodwa said: “No comment.”

Perhaps it is because the ANC is inadvertently benefiting from Motsoeneng’s clampdown at the SABC that the ANC is hanging back or maybe it is because the SABC COO is now too powerful to restrain. The problem is now much bigger than courageous journalists losing their jobs. The SABC is on a slippery slide towards manipulation of the news and the deliberate influence of public perception.

What started out as an attack on media freedom is fast becoming an attack on democracy. And the ANC and government’s refusal to stop Motsoeneng is now aiding and abetting his total onslaught. DM