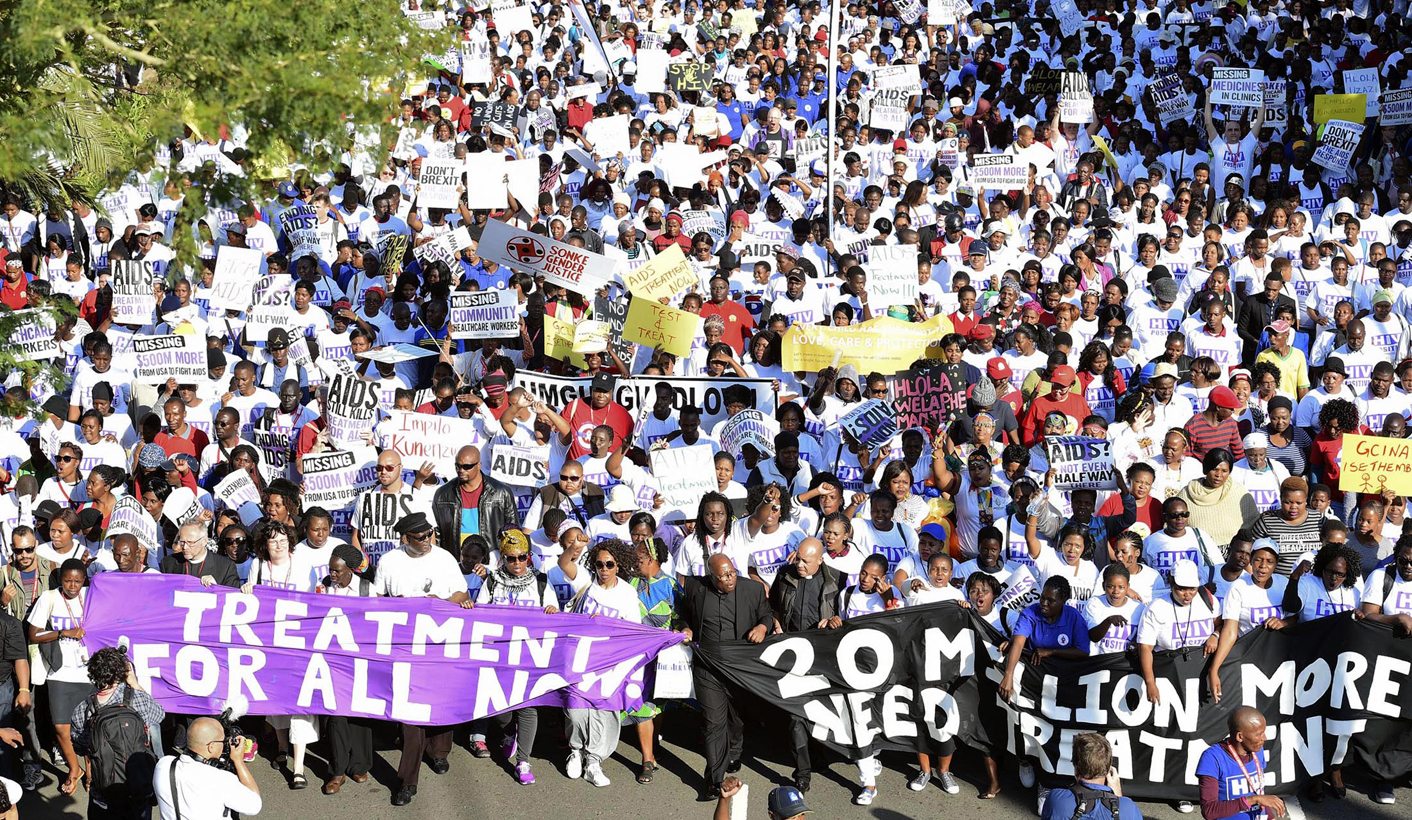 Several thousand people marched through the centre of Durban on Monday to the opening of the International Aids Conference at the International Convention Centre to highlight the need to get antiretroviral treatment to people with HIV. By NATHAN GEFFEN for GROUNDUP.

The march, organised by the Treatment Action Campaign, SECTION27 and US-based Health Gap, highlighted the need to get antiretroviral treatment to people with HIV across the world. The march memo – which was accepted by Deputy-President Cyril Ramaphosa, UNAIDS Executive Director Michel Sidibé, and Minister of Health Aaron Motsoaledi – recognised the achievements against the HIV epidemic that have been made since this Aids conference was last held in Durban in 2000.

“The spotlight must now be squarely on the 20-million people, mostly poor, marginalised and criminalised, stuck away in all corners of the world, who are dying in undignified surroundings, often far away from any semblance of a functioning health system and even further away from the antiretroviral treatment that saves lives.”

Ramaphosa put on an HIV-positive T-shirt. Motsoaledi and Sidibé followed his example. In contrast to the tension at the conference 16 years ago, when a rift was emerging between activists and then health minister, Manto Tshabalala-Msimang, over former President Mbeki’s Aids denialist views, the handing over of the memorandum today was characterised by much friendlier relations between TAC leaders, Ramaphosa, and Motsoaledi.

Speakers, including the deputy president and the health minister, emphasised their desire to work with activists. Motsoaledi said that his department was already implementing the specific demands the memo made upon it.

There was however a moment of tension when TAC General Secretary Anele Yawa criticised UN Secretary-General Ban Ki-moon for failing to receive the memo. TAC activists informed GroundUp that he had committed to receiving the memo at a breakfast meeting earlier that day.

The march had earlier in the day stopped at City Hall where Ban was expected to greet the protesters. But he did not arrive. Nor did he arrive at the convention centre where Ramaphosa and others accepted the memo. Yawa accused the Secretary-General of disrespect. Ramaphosa, however, came to Ban’s defence, citing his track record on pushing for improvement to global health.

Photos: TAC members Tantaswa Ndlelana (top) and Andrew Mosane (bottom) criticised the government’s handling of the HIV epidemic, especially what they consider to be the declining state of the health system.

It’s a noble sentiment. But Aids activists are unimpressed, arguing that the rhetoric of the “End of Aids” is pointless without a plan to do so. UNAIDS has set what it calls the 90-90-90 targets: 90% of people with HIV know their status, 90% get treatment, and in 90% of those on treatment, the virus is undetectable (with the consequence that they are healthier and cannot transmit the disease sexually).

The critical step to achieving this is to scale up HIV testing. But, as Professor Francois Venter, former head of the Southern African HIV Clinicians Society, recently wrote about the situation in South Africa: “Testing remains stuck in overloaded state facilities or in bureaucratic systems in the private sector.”

The problem is certainly not confined to South Africa: US activists have also expressed concern about the inability of their health system to scale up HIV testing.

However, in a press conference this morning, Sidibé recognised that we are nowhere close to ending Aids, a concession that appears to have satisfied activists demanding that rhetoric be replaced by plans and implementation. DM

Geffen is editor of GroundUp.