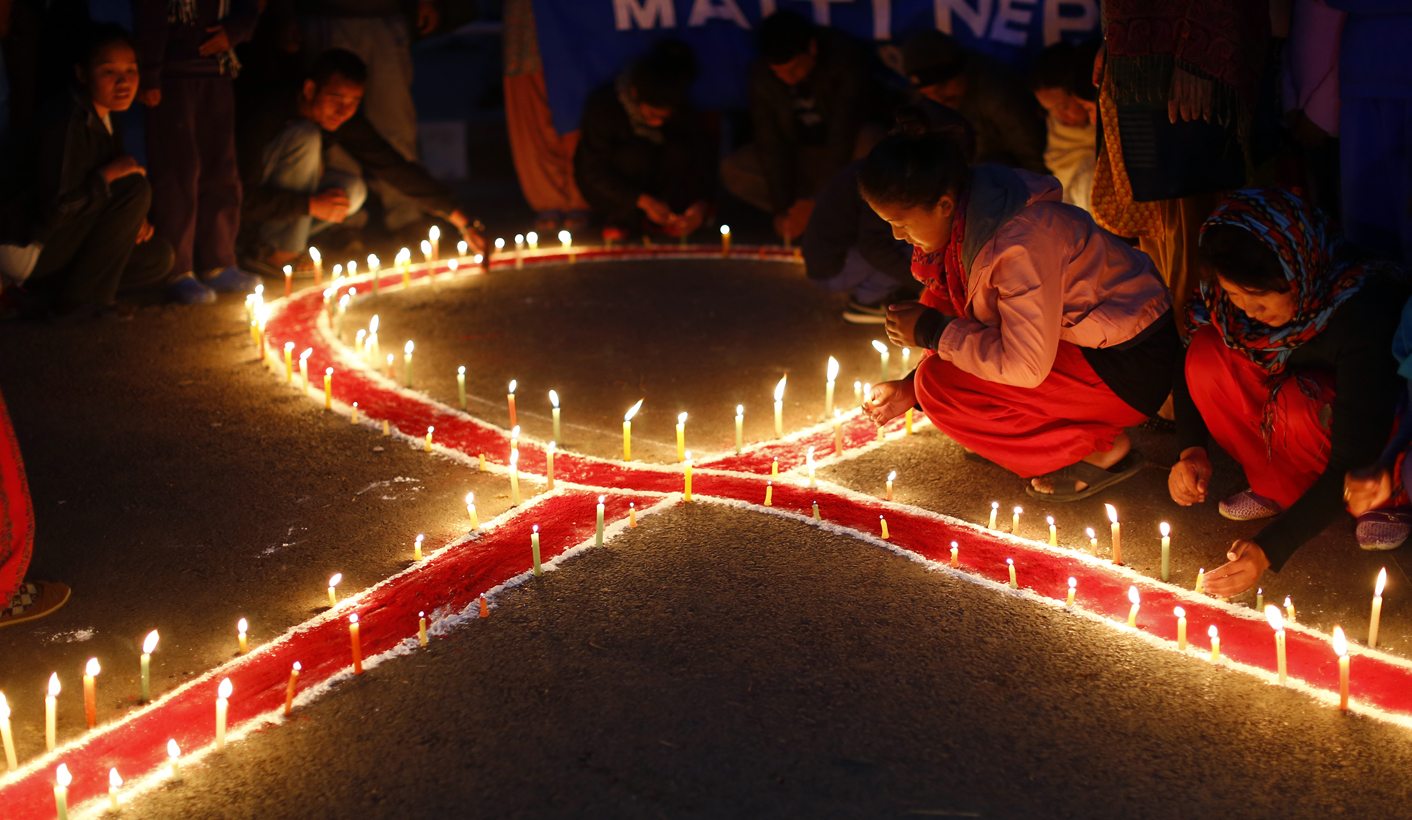 In large parts of Africa, HIV infection rates among young women are so high that a leading researcher has called the pattern “the main driver of HIV transmission”. According to new data, however, it’s not only a social problem. Groundbreaking research to be unveiled at the 2016 Durban International Aids Conference provides a multipronged insight into what makes women so vulnerable – and at least one potential solution to change it. By MARELISE VAN DER MERWE.

Three breakthrough studies are to be presented by the Centre for the Aids Programme of Research in South Africa (CAPRISA) in Durban on Monday, which aim to explain why rates of HIV infection are so high among women in South Africa and on the broader continent.

The research, says CAPRISA, has the potential to guide far more targeted interventions.

Epidemiologist Professor Salim Abdool Karim, Director of CAPRISA, told Daily Maverick: “What we described was the cycle of HIV transmission, based on now really knowing which people have exactly the same virus. And once you appreciate the role of the cycle of HIV transmission, the question is: why is it that these women are acquiring HIV when they are exposed? What is predisposing them?”

HIV infection among young girls and women is at crisis proportions. UNAids reports that there are 2,000 new HIV infections among girls aged 15-24 each week. A 2012 survey found that HIV prevalence among women was nearly twice that of men, and rates of infection among young women were over four times greater than their male counterparts. Poverty, women’s unequal status and gender-based violence have all been cited as contributing factors.

Abdool Karim confirmed that there was still a “significant” difference between HIV infection rates between young women and young men across the continent. “When we look at the HIV epidemic in much of southern and eastern Africa, we see a pattern of transmission where young women have very high rates of HIV,” he said.

The new studies, however, link not only the social and economic environment but also the effect of women’s general reproductive health on their vulnerability to HIV. Two major factors, researchers found, were first that a common imbalance in vaginal bacteria can increase a woman’s chances of contracting HIV; and second, that an imbalance in vaginal bacteria can also hamper the effectiveness of PReP treatment. The result is a triple whammy: that many young women who are already at risk of exposure to HIV in their social environment are more vulnerable to contracting it upon exposure, and less likely to be protected by prophylactic treatment.

But first, to clarify the social aspect. It’s not new information that age-disparate sex is widespread in South Africa. Sugar daddies and “blessers”, for example, are embedded in the social landscape – so much so that platforms like ‘BlesserFinder’ exist online to link “blessers” with “blessees”. But the new research quantifies for the first time the exact role that age-disparate sex plays in the spread of HIV. According to Abdool Karim, high infection rates among young women drive the main transmission cycle in South Africa – and a significant finding of the first study was that men having sex with younger women are a “bridging population” in this cycle, acquiring HIV from older women and then transmitting the virus to younger women. High rates of new HIV infections in adolescent girls were largely being driven by older men, many of whom were also partners of similarly aged women who had HIV prevalence rates exceeding 60%.

HIV is not one homogenous phenomenon; there are many strains. The study tested nearly 10,000 people, and the genetic code of HIV from 1,589 HIV-positive subjects was analysed to understand exactly how the virus had moved from person to person.

“Often people don’t know who infected them, but we can work that out,” says Abdool Karim. By separating and tracking the genetic code of the virus in each person, the researchers were able to trace the path along which it had been transmitted.

“What we learnt is that young women – teenagers, adolescents between 16 and 20 – have a large age difference with their HIV positive male partners who have the same virus. Many of the men are in their 30s,” Abdool Karim told Daily Maverick. The mean age difference for young women below 25 was about eight years, and for teenagers, 11.5 years.

Tackling the predisposition question, the second study found, by testing 119 women, that those with an overgrowth of the vaginal bacterium Prevotella bivia had a 20 times higher risk of vaginal inflammation and a 13 times higher chance of acquiring HIV than those with low levels or an absence of it. The bacterium is responsible for the release of an immunostimulatory molecule, which makes the women more susceptible to HIV.

The third study, meanwhile, found through an analysis of 3,334 genital bacterial proteins from 688 women that the three out of five women who had a “healthy” lactobacillus dominant vagina were more responsive to PReP treatment using tenofovir gel. Women with low levels of locatobacillus, on the other hand, showed little benefit. A subsequent laboratory study showed that when lactobacillus levels are low, the bacterium Gardnerella vaginalis predominates in the vagina, and it absorbs tenofovir – meaning the women themselves are not able to benefit from the drug.

The good news is that the interventions to rectify these imbalances are simple to implement. An imbalance of bacteria in the vagina is known as bacterial vaginosis, and screening for it simply involves measuring the pH of the vagina. It’s a cheap, simple test, and treatment for BV is also cheap and readily available.

The simplest solution, says Abdool Karim, will be to incorporate basic reproductive healthcare into the prophylaxis strategy. This will include vaginal pH testing and, if necessary, BV treatment.

At present, CAPRISA has a study under way where PReP is being introduced to women, which has now been amended to include the new findings. The pH testing and BV treatment will then be tested for efficacy. “We have showed that this may be a problem. So let’s see if the proposed solution really makes a difference,” Abdool Karim explains. Beyond that, it will also be worth taking the research further to see if similar results are uncovered further afield.

But regardless, the solution will need to be multifaceted. “The behavioural aspect is substantially more difficult to tackle,” Abdool Karim emphasises. “It’s important for us to keep doing what we have been doing – the ABCs of condom use, and scaling up treatment so that more individuals have undetectable viral loads and have a lower risk of transmitting HIV. Treatment is a key prevention activity. But this is not going to be enough because there will still be infections occurring in men who don’t know they are infected.”

Rolling out PReP widely for young women, and circumcision for men before they reach the high-risk age of 25, will also make a difference, he adds.

But although the scientific aspect is helpful, it’s ultimately the social support that will drive major change, Karim believes. “It’s also essential that we change community norms. We need to change acceptance of young women sleeping with older men. We have to figure out a way where we all stand up and change the current ostrich approach. The men must stop doing it, the young women must stop doing it. We’re not apportioning blame, but it has to stop if we want to reduce HIV transmission.”

In the meantime, CAPRISA’s researchers hope that discovering the link between reproductive health and HIV transmission will – at the very least – reduce the physiological risk among young women, even where they remain at risk socially and behaviourally.

“We have provided a complex social, behavioural and biological understanding of why women are at such high risk of HIV,” says Abdool Karim. “This includes both the cycle of transmission and their biological vulnerability.” DM

Photo: A group of women and children of Maiti Nepal, a Rehabilitation and Orphanage home for HIV-affected children and women who are victims of trafficking, attend a candle light prayer meeting on the eve of World AIDS Day in Kathmandu, Nepal, 30 November 2014. EPA/NARENDRA SHRESTHA