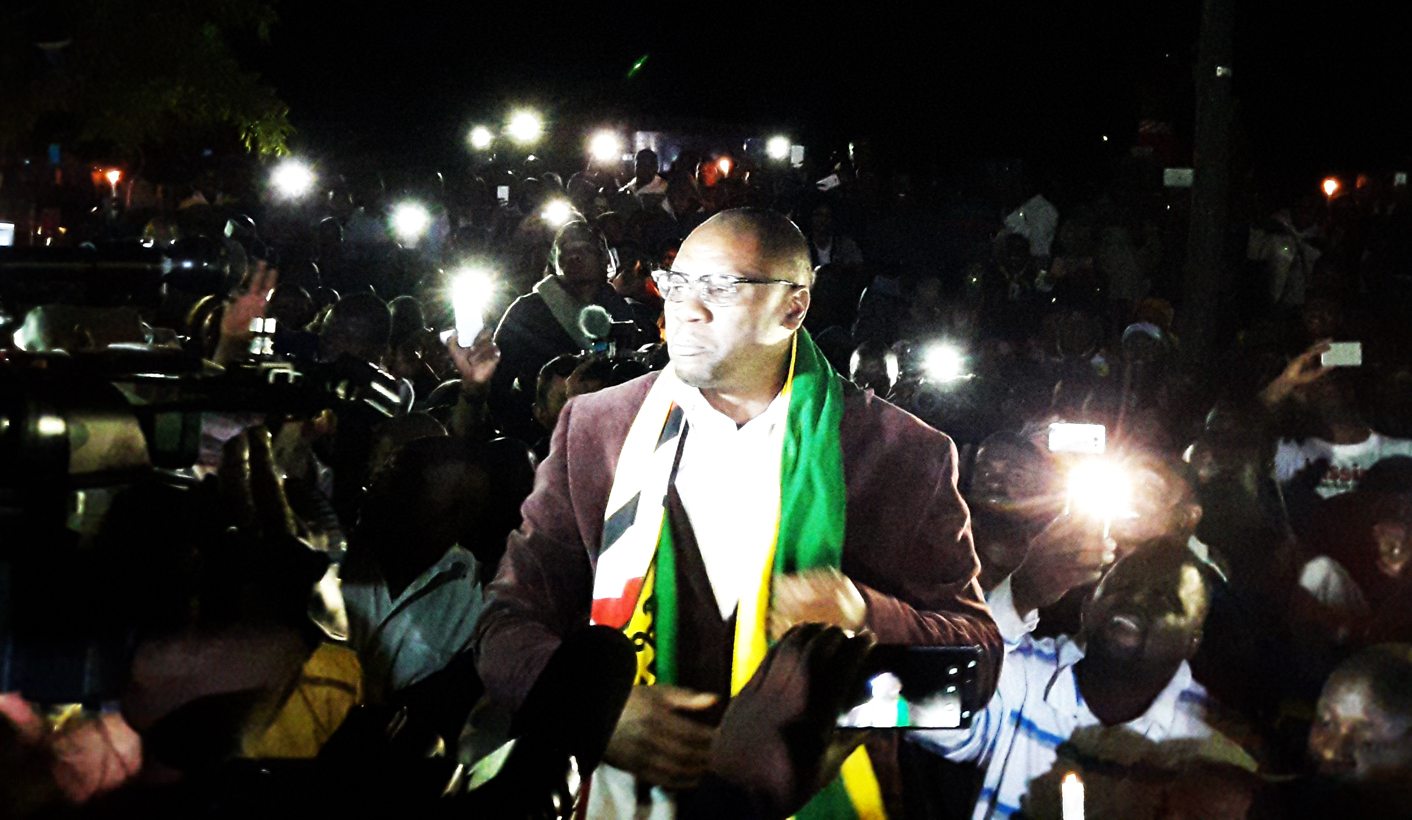 The Zimbabwean regime did not expect Pastor Evan Mawarire to be set free on Wednesday night. But unprecedented public pressure forced the magistrate’s hand, with a little help from blundering police. Look away now, Comrade Bob, because Zimbabwe will never be the same again. By SIMON ALLISON.

Harare Magistrate’s Court may once have been an impressive building, but no longer. The walls are cracked. The paint is peeling. The windows of Court Six, where Pastor Evan Mawarire’s remand hearing was held on Wednesday, are caked with dirt. Only half the ceiling lights work, and the wall clock is stuck at a little after seven o’clock.

As a symbol for everything that’s wrong with Zimbabwe, it’s a writer’s dream, as is the court’s location on the inauspiciously named Rotten Row.

Except that something unexpected happened. The usual show trial script called for Mawarire’s charges to be upheld, and bail denied, to make sure that the state keeps him where they like to keep the troublemakers: behind bars.

But no one followed the script. On Wednesday, rising above the symbolism of these shabby surroundings, something went right in Zimbabwe.

The first to break ranks were the lawyers, nearly 200 of them, who volunteered to represent Mawarire en masse. Not all of them could fit into the jam-packed courtroom – strictly standing room only – but those who did were conspicuous in their sharp suits and business attire.

They became even more conspicuous when Magistrate Vakayi Chikwekwe asked who was representing the accused. As one, the lawyers in the room raised their Law Society cards, an extraordinary image of solidarity that gave goose bumps to everyone else watching – except, perhaps, the none-too-undercover intelligence operatives, who appeared to be carefully noting down faces and names. That the lawyers present were undeterred by this danger underscores their bravery.

“There are times when we have to shed our status as lawyers and push for justice as citizens. It does not require a lawyer to see that there is injustice going on here,” said Belvin Bopato, an attorney.

The hundreds, and at times thousands, of people gathered outside were doing something equally unprecedented. They were protesting. In Mugabe’s Zimbabwe, protesting is a dangerous, even fatal, activity. Which is why it doesn’t happen very often, and never in these numbers. But here they were on Wednesday, draped in the national flag which has become such a subversive symbol of resistance, chanting and singing and praying all through the day and early evening as they waited for the magistrate to deliver his verdict.

Photo: The hundreds, and at times thousands, of people gathered outside the court in Harare on Wednesday (Simon Allison)

“It’s been a while since Zimbabwe last had a voice, but now it has found a voice. I’m here to stand in solidarity with Pastor Evan,” said activist Mlambo Garikai.

The most unexpected plot twist, however, was delivered courtesy of Magistrate Chikwekwe himself. It was possible to feel some sympathy for the magistrate, who found himself in a classic Catch-22: flout the law but keep his political bosses happy; or follow the law but anger his superiors, who have the power to make him very uncomfortable indeed.

It was obviously a difficult decision. Even after starting proceedings six hours late, Chikwekwe called several long adjournments, and only delivered his verdict full 90 minutes after it was due.

As they waited, the audience inside the courtroom sang and danced, while the large crowd outside began to get impatient. Had Mawarire not been released, a confrontation between riot police and protesters would probably have been unavoidable.

But the law won. After lecturing the police and prosecutors about their mistakes – most notably in substituting the original charges with a much more serious treason charge just minutes before the hearing began – Chikwekwe told Mawarire he was free to go.

The courtroom erupted into cheers and ululations, as did the thousands of people waiting outside, who by now were holding candles. “I feel ecstatic. We have shown that if we can come together we can push the system to work normally. What happened here today gives us hope,” said Elton Kapfunde, one of the pastor’s many supporters.

Ngonidzashe Marera, a friend of Mawarire’s, said that the verdict showed the strength of the pastor’s faith. “I’m over the moon. God is there for us. Good has prevailed. Man’s arms are too short to box with God, clearly.”

If Robert Mugabe’s regime falls – and that day is considerably closer today than it was yesterday – then historians will look back and pinpoint this as the moment when the tide began to turn. There’s no doubt that the sheer scale of the solidarity movement frightened the ruling party’s decision-makers, who never intended to let Mawarire walk, and may even have forced Magistrate Chikwekwe’s hand.

On Wednesday, Zimbabweans in their thousands took on the regime, and won. And now that they’ve done it once, they can and will do it again. DM