Hlaudi Motsoeneng, after Icasa ruling: ‘We are not going to change anything’ 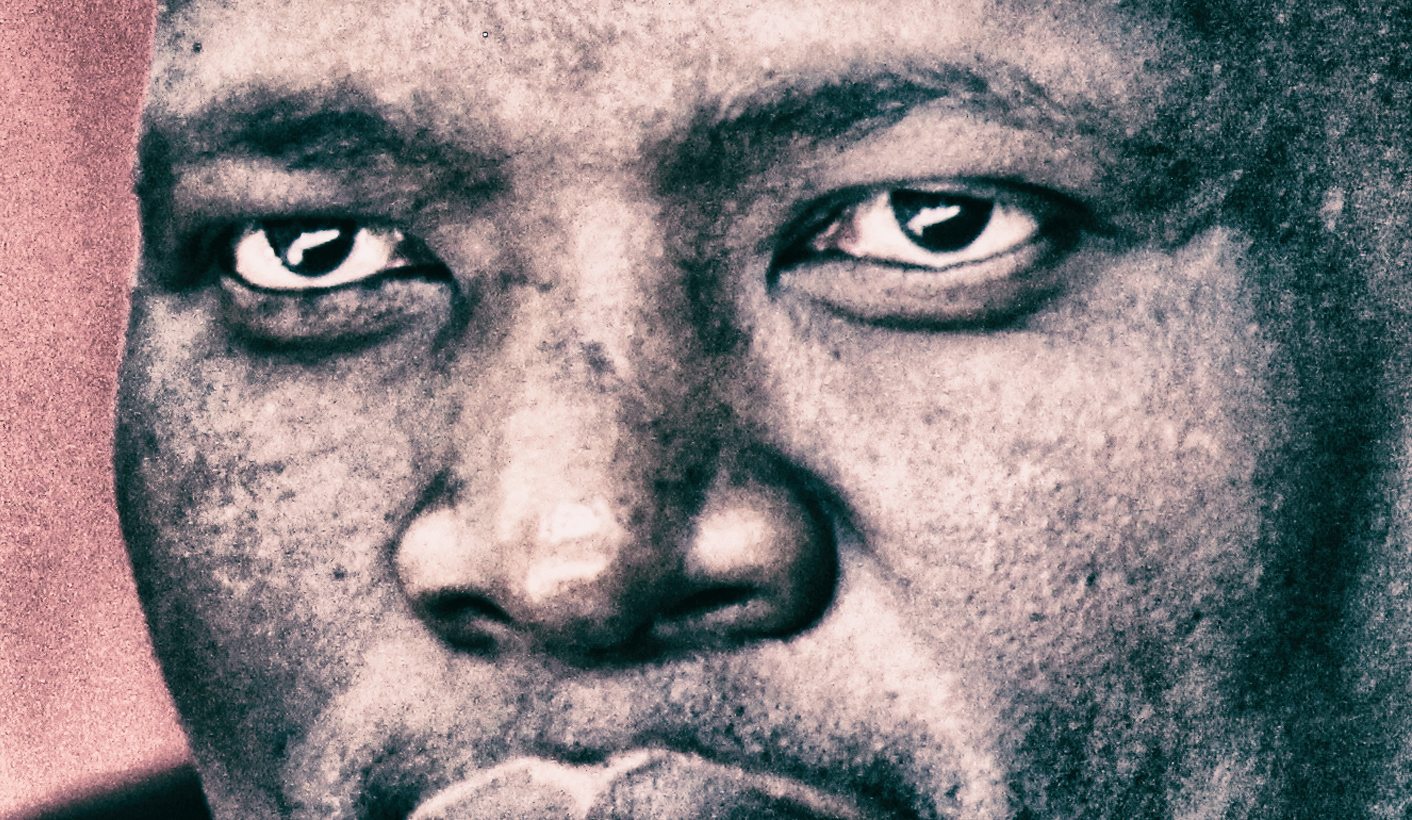 The Independent Communications Authority of SA (ICASA) on Monday ordered the SABC to scrap its policy on violent protests, but, typically, the public broadcaster remains committed to its controversial position and will challenge the ruling in court. The ANC is trying to intervene, but will only announce its latest position in a media briefing on Tuesday. By GREG NICOLSON.

Hlaudi Motsoeneng, amid constant criticism, has managed not only to hold his position where many others would have been sacked or forced to resign, but has increased his influence over the public broadcaster. There are multiple rumours on how he continues to reign under intense pressure, but much of his strategy is simple: Garner support from the right people at the right time. Choose policies to win them over. Take a hard line against anyone who disagrees. Always appeal court judgments. And never, ever admit to being wrong.

The SABC employed similar tactics on Monday when faced with a damning ruling on its policy not to show footage of violent protests. The policy, announced in May, has become a rallying point for critics who have for years been calling for a change of leadership and culture at the public broadcaster. It has led to the suspension of three journalists, pending disciplinary action against another five employees, the resignation of the SABC’s acting CEO, and rolling protests outside SABC offices.

Despite wide-ranging criticism, the SABC has defended the move, but the ICASA judgment rejected the public broadcaster’s arguments to keep the policy. The case was brought by Media Monitoring Africa, the SOS Coalition and Freedom of Expression Institute, and ICASA found the SABC had acted against the Broadcasting Act, its licensing agreement, and the Constitution.

“The order of the SABC places an absolute ban on a subject. A subject, as such, may never be blocked from SABC television or radio – South Africa is not, as in the apartheid era, a dictatorship,” said the judgment from Professor Jacobus van Rooyen, chairman of the Complaints and Compliance Committee.

ICASA said information on the burning of public property during service delivery protests is in the public interest and cannot be categorically blocked. While the Broadcasting Code limits the screening of certain types of violence, it depends on the manner in which it is broadcast.

“The order by the SABC was invalid from its inception,” Van Rooyen wrote.

ICASA’s ruling is legally enforceable and the policy must be withdrawn retrospectively from the date it was issued. The SABC has a week to show it has complied, and punishments for non-compliance can include a warning, fine, the suspension or revoking of its licence, but it can and will challenge the ruling.

“I wasn’t surprised,” said SABC chairman Professor Mbulaheni Maguvhe at a briefing shortly after ICASA ‘s judgment was released. “It’s not because I didn’t believe in what we’ve done, but that’s how things are in our country these days, but I won’t elaborate any further,” he added.

“I still believe that we were right and I maintain that we are right. We have never imposed any blanket ban on the visuals. I’m surprised that this word is being used – “blanket ban”. For us it’s not a blanket ban, it’s just a veil. You can see through it because in any case we are showing visuals. If it was a blanket ban there wouldn’t be any visuals at all,” Maguvhe continued.

The SABC plans to take the decision on review and said it will approach the High Court or Constitutional Court if necessary.

SABC leaders on Monday staunchly defended the policy, without acknowledging the degree to which ICASA rejected it. “We are worried as the board and SABC that freedom of speech and freedom of information doesn’t mean that our children whose smiles are not ready to digest these visuals, I’m just giving an example, that we should expose them to these visuals to grow to be hooligans and irresponsible citizens,” said Maguvhe.

He repeated the argument that Western news outlets don’t show images of deceased white people, while visuals of black people are shown. (It may be an important point, often debated, but has little, or nothing, to do with the discussion of the SABC’s policy on protests and the burning of public infrastructure. )

“I don’t know why people want to dictate for the SABC but we as SABC we are clear on what we are doing and we still believe that we are within the Broadcasting Act. We are within the regulations. I mean it’s how people translate and interpret English,” said the COO. “We are not going to change anything.”

Responding to recent news reports, SABC leaders said the institution is financially sound, made the right decision to overrule its panel and recommission the successful Uzalo series, produced by a production company partly owned by President Jacob Zuma’s daughter Gugu Zuma-Ncube, and was not biased in its political coverage, as alleged by former acting CEO Jimi Matthews, who recently resigned.

“EFF in 2014 was not a party. It only became a party in 2015. So were we expected as SABC to give EFF a platform, a political platform to air their views and not do so to registered parties?” asked Maguvhe. He was either making an enormous gaffe, as the EFF was founded in 2013, or claiming that the SABC should only feature parties who already have seats in Parliament.

SABC leaders on Monday would not comment on disciplinary action against employees.

“Hlaudi must go! Away with censorship, away!” Right2Know’s Micah Reddy shouted during the SABC press briefing before he was escorted out by security. Reddy said he interrupted the briefing because of the predictable “hot air” from the board and to “give Hlaudi a bit of a taste of his own medicine”. The COO cancelled a meeting last week with civil society organisations, media representatives, and union leaders and on Monday, after protesting outside the SABC’s Auckland Park offices, Right2Know were told they couldn’t attend the press conference, but Reddy and a colleague managed to get access.

“The fact that Hlaudi has treated the public and treated critics with absolute contempt was part of what prompted the protest today,” said Reddy. He welcomed ICASA’s ruling but said the institution had “proven to be fairly toothless in the past”.

In a statement, Media Monitoring Africa dismissed the SABC’s response to the ICASA ruling. “It was clear that theirs was an attempt to defile the ruling, common sense and logic. While it is always of great concern when people in authority effectively defecate on our Constitution, their arguments are so blatantly puerile and misleading as not to bear further scrutiny,” it said.

“In a just world the SABC would have responded with dignity and humility, acknowledged their wrongdoing and committed themselves to the highest standards of ethical journalism. Instead we have seen the ruling met with arrogance and dismissal, an affront to the institutions of our democracy and the intelligence of every person in South Africa. They might be smug now, but will be less so when they lose – as inevitably, they will, as is the lesson of all tyrants the world over,” Media Monitoring Africa continued.

Mike Baillie from Avaaz, which has drawn more than 30,000 signatures for its petition to have Motsoeneng removed, said on Monday, “Motsoeneng is taking a wrecking ball to South Africa’s democracy. His reputation is in ruins after today’s ICASA ruling, but he’s digging in. He needs to go and ICASA’s ruling must be respected, not swept under the rug.”

In another petition, Amandla.mobi has gathered almost 8,000 signatures calling for changes at the SABC.

The Democratic Alliance has repeatedly taken Motsoeneng to court, demanding his removal. Party spokesperson Phumzile van Damme on Monday said the DA “strongly encourages the SABC to immediately implement the order, and not waste any more public funds on frivolous litigation”. It’s time to start fixing the mess, she added.

Motsoeneng’s and the revolving board members’ positions have relied largely on the support of Communications Minister Faith Muthambi, who was summoned by the ANC on Monday to Luthuli House to account for the lack of expertise of those running the SABC and the public broadcaster’s policy on protests, which the ANC subcommittee on communications said amounted to censorship. On Monday, the head of the ANC subcommittee Jackson Mthembu wouldn’t comment on the meeting or the ICASA ruling, saying the ANC would hold a media briefing on Tuesday.

Following Motsoeneng’s successful example, the SABC will publicly act righteous in its decisions while using the courts to resist changing its editorial policy on protests for as long as it can. In the short term, only the ANC’s actions can lead to change at the public broadcaster, either through pressuring the president to replace Muthambi or getting the minister to pressure the SABC to change course.

When ANC politics are considered, both options seem unlikely, especially given Muthambi’s history of ignoring party decisions, but given Mthembu’s surprisingly harsh criticism last week and the ongoing twists in the story, anything seems possible, even an end to Motsoeneng’s and the SABC’s current survival strategies. But if any of that happens only after the elections, Hlaudi’s mission would have been accomplished anyway. Time was always on his side. DM