Grahamstown ArtsFest ‘16: Crepuscule, a Triumph for Sophiatown, memory of Can Themba and the Drum era 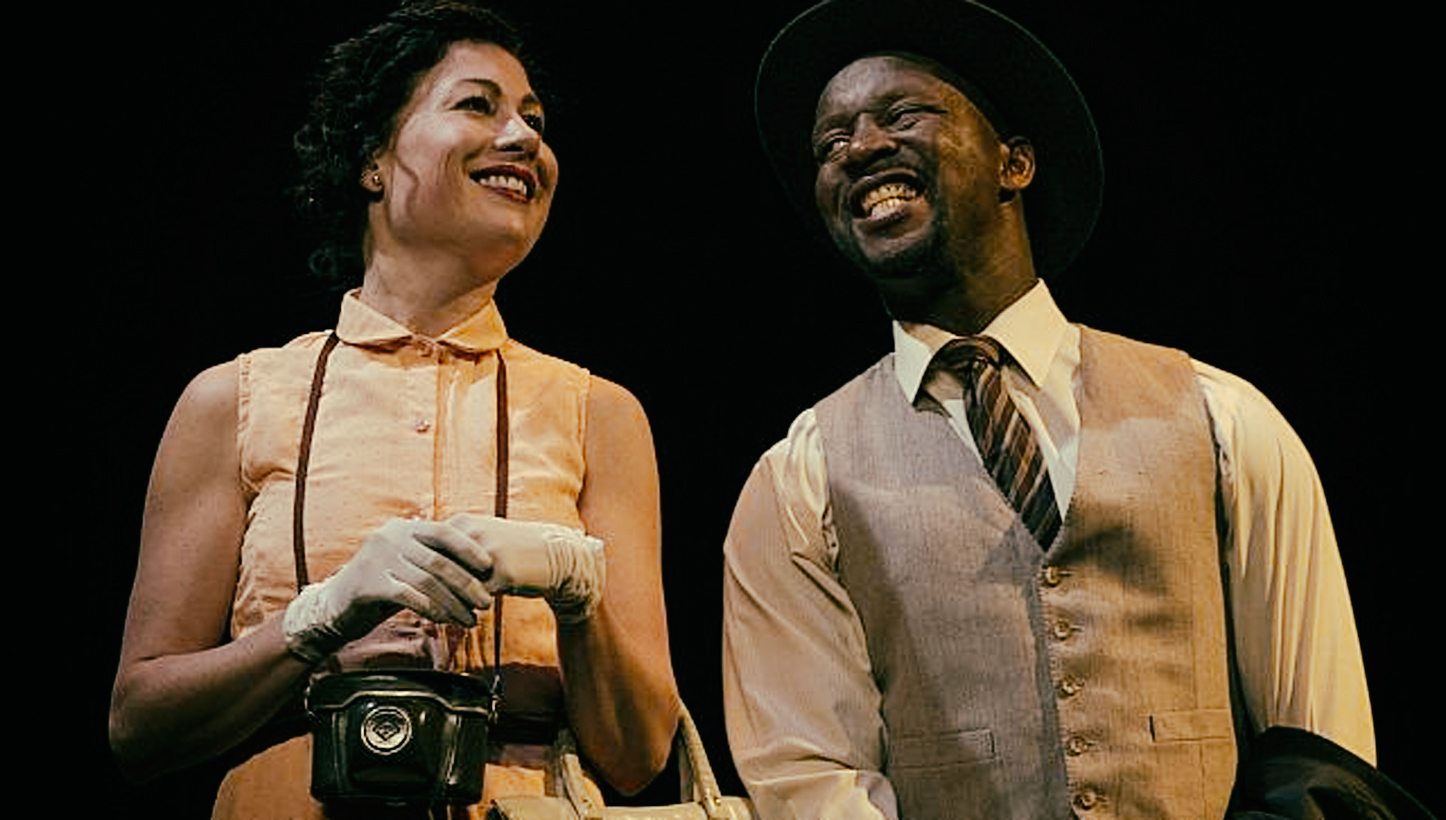 Sophiatown. Sometimes one word can carry a whole story. Sometimes a word feels the weight of itself. Sophiatown, a word of glory and sunshine, a word of freedom and no chains. Sophiatown, which came to be replaced by a much lesser word. A small-minded little collection of six sad little letters. The sort of word mouthed by people of tunnel vision and petty malice. C’mon everybody, give me a T, give me an R … give me a pitiful I, give me a self-loathing O. Give me a desultory M … oh and throw in a capricious F at the end. But no cheering please. There is no triumph in this. By TONY JACKMAN.

District Six is a miserable story, and many have told its tale, in many ways. But Sophiatown’s story has a particular poignancy about it, lent to it by the horrid name the apartheid – I almost typed Nazi – authorities bestowed on the suburb that limped like a dying, defeated Phoenix from the rubble of Sof’town and coughed into life. Triomf. Spit it out, free the phlegm from its gobby lair. Triomf. A word turned in on itself. Somebody give it some rope and a chair.

The triumph of enmity over joy, of desolation over passion. A suburb born of hate, a place that could never face itself in the mirror. If something so rancid, so putrid can be said to have been born. Triomf was spat out and left to fester. A crepuscular sort of place which will find no sunlight, for even the sun hides from it.

Comes the light, not to Triomf but onto the stage, so that what has died lives in the writer’s ink. Comes the writer. Comes Can Themba. Comes passion, light and music, whiskey and dance. And to Grahamstown, from the Market Theatre, where it played in 2015 to happy audiences, comes a company of actors with props and furniture and practice and precision, to bring Sophiatown to front of mind and into our hearts, to live again where Triomf did not triumph, for you cannot triumph over the pen even if you kill the writer or bind his hands. Foul regimes have learnt that over and over again, if only posthumously. Somebody read this to Kim Jong-un and his ilk. You will all be judged and found wanting, one day, and your names will live on in pus and in bile. Well done! But no gold star for you, little North Korean boy.

There’s your setting. Even as you walk into the theatre there is a mood of expectation, of something brewing. The massive stage at Grahamstown’s Victoria Theatre is lit in dusky, nightclubby hues. Actors in Fifties garb are wandering this way and that, past each other, contemplative, as if thinking about their lives, their politics, their loves and losses; maybe they’re remembering the Sophiatown that was, not the one that is again now, now that the name, if nothing else, has triumphed again over Triomf, even if the light that once was may not have returned to a new Sof’town, and Can Themba’s crepuscular shadows still cast their shade.

The lights slowly lower the audience into the darkness of the theatre immediately before curtain-up, that space between the ordinary day outside and the thing that is about to happen. A crepuscular sort of space, but inverted, for where there has been darkness there is the beginning of light. A space in which to wonder and to marvel, to ponder and to fear.

Into the space comes the kada-kada, kada-kada of a hasty train. With infinite artistry the ensemble cast are taking us through the folds of 50 to 60 years and into the Joburg of women with a dompass and soon to march, men choking deep in white men’s mines, Sharpevilles and township jazz lingering somewhere in the wings, and cool dudes who have pens and know how to use them, meeting in bars and houses of truth to plot their latest story for Drum magazine. In minutes, we’ve been taken out of Grahamstown 2016 and deposited in Fifties Sophiatown. And we’re in a magical place and rarely have I wanted more to be in the theatre than at this moment.

Can Themba is a hero to me. The Drum Boys per se are heroes to us all, or should be. Not only because of the way they spoke their truths in those darkly oppressive yet ironically colourful times, but the style and élan with which they did so.

There’s always been something Chicago-like about it all, and writer-director Khayelihle Dom Gumede has grabbed and used that. Sophiatown has been described as having been a bit like Chicago, or that image we have of Chicago as a place where a somewhat pissed Frank Sinatra might be crooning a maudlin lullaby to a longsuffering barman after closing time while in a nearby street Al Capone is shooting up some hoods and an over-rouged hooker in a thigh-clinging satin dress is eyeing some bum in a Cadillac cruising the kerb. There’d be curls of smoke and a curl of a ruby lip in a Chicago that smells of tobacco and tastes of bourbon.

Into this enticingly seedy milieu comes a love affair between the black writer Can Themba and the white sophisticate Janet, loosely based on Jean Hart, with whom he had an affair in the Fifties, they say. Janet, shock/horror, is a married woman, and through the telling of the tale of this affair we’re taken into Themba’s world of stories, truths, carousing, thinking and dreaming.

In programme notes for Crepuscule, it is observed that Sophiatown was a place of “half slum and half suburb”, and that “perhaps for Can Themba, too, Sophiatown itself was crepuscular, full of shadows, everything and nothing, all at once”. The notes are worth setting down: “This enigma of a man serves as our portal into this world and to a series of socio-political questions about the then and now that we ask through this production. Perhaps the reason Can’s life has evaded the biographer’s microscope is because of this strange distance he managed to achieve in his observations of the place. Maybe it is fitting, then, that Khayelihle borrows from Don Mattera’s words by saying: “Nobody can write the real story of Sophiatown, the rise and fall of the township, the magic and wonderment of the place.”

There’s the thing: the magic and wonderment of a Sophiatown, or a District Six. It’s hard to deny that we do romanticise such places, that we make of them a halcyon thing which may be very different from the truth of the place as it was for those who lived there in that era and breathed its air. We cannot know what it may really have been like, but the idealised place becomes somewhere we can imagine having been, in some gin joint or some smoky palace of sin and delight.

And we face the inescapable truth, watching these figures find their way to some kind of future in a milieu of sinister politicos with yet more sinister and self-serving intentions, that we’re living in a puzzlingly parallel world of our own in a future South Africa we did not see coming. And we’re looking for our new Can Thembas and Nat Nakasas, and we’re finding them.

I remember spending a week in Joburg circa 1990 and somebody pointing to a dreary suburb and saying, “Do you know what that place is?” with me replying, “Nowheresville RSA”? The answer: “That’s Triomf. Sophiatown!” Me: “Noooooooo way!”

Out of the ashes of the vibrant, if also violent, thrum and thrust that had been Sophiatown had risen a drab monument to the working-class white Afrikaner. A place of serried blandness, a suburb ashamed to look into your eyes lest it reveal its black heart to you. The halcyon memory trounces the bleak reality of apartheid’s sorry victory; a victory thwarted by what art can make of dark materials: a tapestry woven of brutality and treachery.

The National Arts Festival is done and dusted for another year, but like the brilliant musical Sophiatown! first staged in 1986 and revived this year in Joburg, this Market Theatre production of Crepuscule will linger in my memory long after the final curtain has fallen on this festival. DM