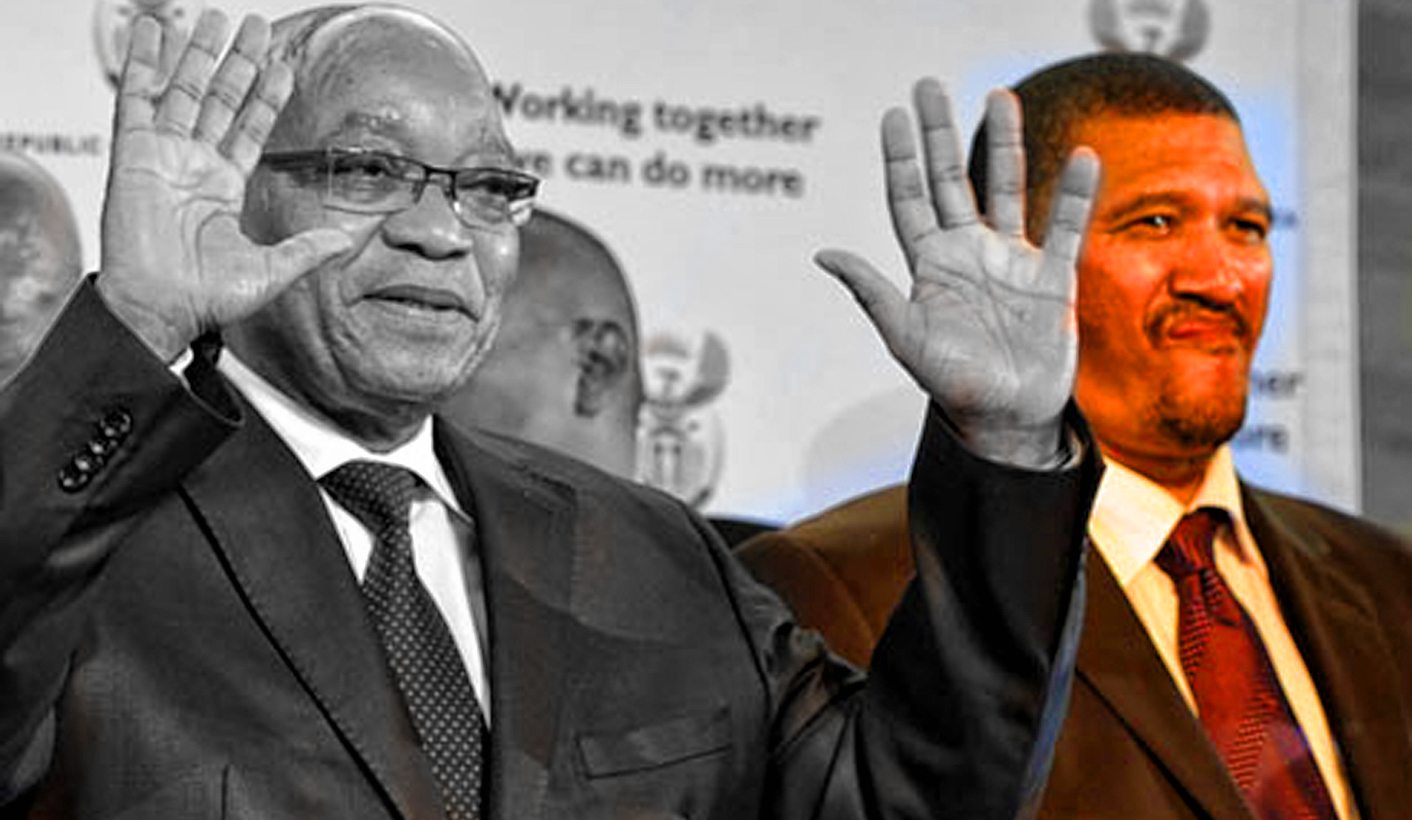 The weekend brought fresh news that the ANC’s Integrity Commission has found that ANC Western Cape Provincial Leader Marius Fransman – alleged to have sexually assaulted a 21-year-old woman on a road trip in January – has brought the party into disrepute. The commission recommended that Fransman immediately relinquish all elected positions and that he should not be eligible to be nominated as a public representative for at least two years. Fransman, however, is not going to go quietly, it seems. By MARIANNE THAMM.

The elders have spoken. Controversial ANC Western Cape provincial leader and married father of two, Marius Fransman, should relinquish all elected positions in the party and not be allowed to be nominated as a public representative for the next two years. The ANC stalwarts added that allegations that Fransman had sexually assaulted a young employee, Louisa Wynand, on a road trip to the ANC’s 104th anniversary in Rustenburg in January, had indeed brought the ANC into disrepute and had tarnished its image.

Integrity Commission chairman, ANC Veteran Andrew Mlangeni, reportedly said that the evidence Wynand (who was 20 at the time of the alleged assault) had presented to the committee “is of a cogent nature and more likely to be true than not”. It is now up to ANC Secretary-General, Gwede Mantashe, to give effect to the recommendations.

Meanwhile, Wynand says she has still not been contacted by Northern Cape NPA investigators who picked up the case from their North West colleagues after a series of incriminating WhatsApps Fransman had sent to Wynand before the trip were made public in the Daily Maverick. Fransman has not challenged these WhatsApps, which were sent from one of his cellphones to Wynand.

If the ruling party is serious about a declaration it issued after its 4th National General Council in October 2015 it should only be a matter of time before Fransman, a powerful but divisive figure in the region, will find himself politically out in the cold.

At the October NGC the ANC affirmed its commitment to rooting out corruption, factionalism, the buying of members, and “gate keeping” in the party. Making the announcement NEC member Jeff Radebe said that “this NGC paid particular attention to the standing, capacity and powers of the Integrity Commission established following a resolution of the 53rd National Conference. We agreed that the decisions of the Integrity Commission are binding and the Commission should be better resourced to fulfil its mandate.”

Politically, the ANC doesn’t have much to lose provincially in the Western Cape. Since 2009, DA support has strengthened while the ANC has haemorrhaged votes. The (nationally) ruling party clearly does not know how to operate as an effective opposition and has surrendered the hard work of exposing DA fault lines to NGOs like the Social Justice Coalition or Ndifuna Ukwazi.

Locally the ANC has also managed to alienate the influential Ses’Khona People’s Rights Movement and in June one of its co-founders, Loyiso Nkohla, sensationally pledged support to the DA. More or less the same time, 500 members of the organisation which thought up the “poo protests” in the region and which plotted to dump human excrement on the steps of the Western Cape legislature, joined the DA, leaving the ANC red faced. The Western Cape ANC has also been placed under administration in the region by Luthuli House.

The ANC’s most common form of opposition in the province is mostly to issue statements, often marinated in predictable rhetoric. Occasionally these are just plain inaccurate, blaming province, for example, for the lack of policing in gang-ridden areas when this is a national competency. In 2013 Premier Helen Zille had to turn to the courts to ensure that the Khayelitsha Commission of Enquiry into policing took place as then Minister of Police, Nathi Mthethwa, sought to shut it down.

The Western Cape consists of one metropolitan municipality, the DA-led City of Cape Town Metropolitan Municipality and five district municipalities, which are further subdivided into 24 local municipalities. The ANC leads some of these, including Cape Agulhas, Beaufort West, Prince Albert and the Central Karoo district which was specifically singled out for its abysmal performance by Auditor-General Thembekile Makwetu in his 2014/15 audit report into municipal financial management.

The ANC’s track record under Fransman has been dismal. He has alienated ANC members, played the national game of patronage politics and has publicly associated with alleged underworld figures including Mark Lifman who, according to a City Press investigation, is “a known associate of alleged druglord and Sexy Boys gang leader Jerome “Donkie” Booysen”. Fransman is also known to be a close ally of President Zuma.

There is no doubt that Fransman – in the lacuna between when Louisa Wynand lodged the charges of sexual assault and when these finally came to be taken seriously by the NPA and the ANC’s Integrity Commission and even while he had stepped down – had some hand in compiling local ANC PR lists for the upcoming local government elections. He is far too entrenched to have lost support and influence overnight, regardless of allegations of sexual assault.

Fransman’s supporters have publicly prayed for their leader and have also come out aggressively on social media attacking and insulting Wynand.

But if in the Western Cape the ANC is technically a lame duck, then what’s the factionalism and power-mongering all about?

Fransman, it appears, is going down fighting, maintaining the alternative narrative that he has spun around Louisa Wynand that she was a “honey trap”. Wynand, a budding musician, had suspended her studies at Stellenbosch University to take a job at a local “boutique” hotel situated on the Asara Wine Estate in Stellenbosch which is where Fransman, a regular visitor to the estate, first encountered her.

Wynand had been promoted to a position as “hostess” – greeting diners as they arrived at the restaurant – and it is here that she caught Fransman’s keen eye.

Fransman has issued contradictory statements about Wynand, at first saying he did not know her and that she had been a “guest” of one of his fellow passengers on the Rustenburg trip. The WhatsApps he sent her, however, blew that lie right out of the water.

Fransman, like a man suffering from a bad bout of echolalia, still maintains that the charges are part of a broader conspiracy by a “rival faction” in the ANC determined to oust him.

But let’s peel that onion and for the sake of argument entertain Fransman’s version of events, a version in which he is somehow “set up”. In this narrative Louisa Wynand would have to be a plant. A “dangle” as they say in the spy world. A willing or unwitting dangle – take your pick.

Be that as it may, the point remains it was Fransman who was the first to approach Wynand and offer her a job. It was Fransman who sent her embarrassingly puerile WhatsApps. And even if we were to entertain the charge that he was set up – which is deeply insulting to Louisa Wynand – it was Fransman himself who fell for the bait, hook, line and sinking political career.

From the harrowing tale Wynand told police at the Sun City charge office after her dramatic escape from three men old enough to be her father, one thing is certain – she caused a wave of wild panic among a clique of influential ANC politicians and minders who orbited Fransman and who clearly did not expect Wynand to fight back or to speak out.

Fransman on Sunday told City Press that while he has “honoured the integrity commission and I respect the elders, but I will never allow the process to be abused”. Still suggesting that Wynand is not telling the truth, Fransman added that it was “shocking” that a non-ANC member (Wynand) had been allowed into “an ANC internal process to give evidence against an ANC comrade without other witnesses being called”. Fransman is referring here to the two passengers on the trip, his close friends and associates Majiet Mogamat and Donovan Cloete.

Fransman also suggested that confirmation that a member of the commission had, in a personal capacity, offered Wynand a bursary to complete her studies, was an attempt to “coerce people”.

For now it appears Marius Fransman has plucked and basted his political goose. It will be up to Gwede Mantashe to cook it. DM