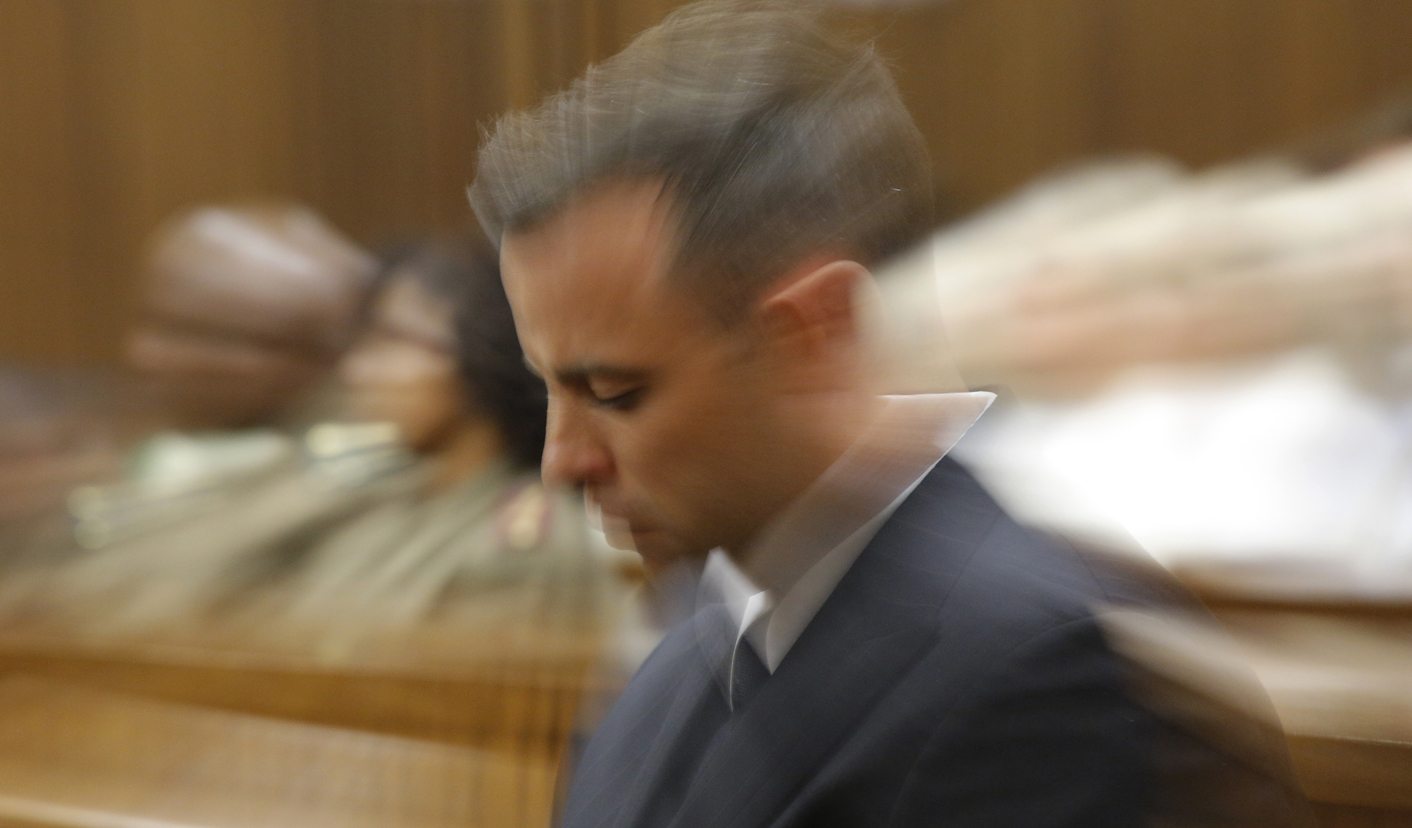 Oscar Pistorius’s six-year sentence for the murder of Reeva Steenkamp appeared shocking. Judge Thokozile Masipa was careful to explain her reasons, but it’s hard not to connect it to the current state of South Africa. By GREG NICOLSON.

There was a touch of déjà vu on Wednesday as Oscar Pistorius stood in the North Gauteng High Court awaiting sentencing from Judge Thokozile Masipa for the second time. The Pistorius and Steenkamp families, and the media, sat in the gallery behind the former track star as Masipa again weighed up the arguments in mitigation and aggravation. He was asked to stand before being told his fate: Six years imprisonment, one year more than the sentence he received in October 2014.

Wednesday’s judgment came after the Supreme Court of Appeal found Pistorius guilty of murder and said Masipa’s 2014 judgment of culpable homicide was a “fundamental error”. Her decision to sentence Pistorius to six years for the crime of murder, which carries a minimum sentence of 15 years in jail, left many observers bewildered, and furthered the public perception that the justice system is unequal, favouring the wealthy, white, and well known, while ignoring crimes against women.

Kubi Rama, a gender and media expert who has written on the matter before, said on Wednesday, “For years NGOs have been asking that sentencing in cases of gender-based violence be reviewed and standardised. There is no justification for this decision and indeed it is an indictment on the South African legal system that a young woman’s life is worth so little. Yes, Reeva Steenkamp will not come back, but she died a violent and horrible death. Why should Oscar Pistorius not be subjected to full might of the law?” she asked.

“Is it because he is a celebrity? Not acceptable at all. We should all register our dissatisfaction with this decision. Women all over South Africa experience abuse on a daily basis and the South African legal system just told them that their right to safety and security is negotiable.”

The ANC Women’s League, which has supported the Steenkamp family throughout the case, was also critical. “The judgment sets a precedence (sic) that gender-based violence crimes are equivalent to petty crimes in our country,” said ANCWL Secretary General Meokgo Matuba. She said Masipa displayed “undue sympathy” towards Pistorius and rejected the judge’s finding that the case was not about gender-based violence.

Apparent contradictions and failings in the justice system have been criticised throughout the case and on Wednesday social media was rife with stories of similar or lesser crimes drawing harsher punishments. In May, three rhino poachers received 15-year sentences and Sidiswe Manqele got 12 years for killing rapper Nkululeko “Flabba” Habedi. In June, two men who were captured on camera robbing an SABC crew were sentenced to 15 years behind bars. Much of the response to Wednesday’s sentencing reflected on the socio-economics of race and class: Pistorius is white and can afford a top legal team, so he was viewed favourably and given a lenient sentence, when black, and particularly poor, people would be judged harshly.

Geraldine Moodley, director of the Wits Justice Project, which uses investigative journalism to highlight miscarriages of justice and problems in the criminal justice system, noted how Pistorius has received different treatment from others facing trial.

“There are numerous privileges Oscar has had since the start,” Moodley said. She said his treatment has differed “in comparison with inmates we correspond with who are not wealthy, cannot find adequate representation, cannot facilitate appeals quickly. Many are often awaiting trial for up six years, as [have] one of our contacts.” The system, it seems, worked in Pistorius’s favour from the start, at least compared to the treatment of others.

Moodley, however, said the sentence seems appropriate. Despite public perception, the state couldn’t provide evidence to negate Pistorius’s claim that he thought he was shooting an intruder, and while the SCA found he should have foreseen the death and ruled him guilty of murder, it was not proven that the crime was premeditated, she said.

“Judges interpret aggravating and mitigating circumstances differently, which results in many offenders receiving lengthier sentences. Masipa believes the likelihood of Oscar committing the same crime again is unlikely, which is discretionary, as well as that (he) is remorseful,” said Moodley. Pistorius’s sporting successes might have helped his case, she added, while others less fortunate could see others err in the opposite direction.

“It surprised me,” said attorney and legal analyst Tyrone Maseko of the sentence. “I was surprised he got six years.” Maseko said it was hard to see enough relevant factors justifying such a reduction on the minimum sentence, but he also thought Pistorius’s race or privilege did not have a strong influence. “I don’t think that it matters much,” he said.

Maseko said that throughout Pistorius’s time in front of Masipa, the judge appeared to show sympathy towards the accused. “If you look at her conduct in this whole trial there is a side of her that was sympathetic and empathetic.” Asked about comparative cases where people have been given much harsher sentences, he said consistency in decisions is a “real problem” in the justice system and it needs to get to a point where those in similar circumstances are treated similarly. Given different judges’ positions, that’s hard to achieve, he added, “but that was what minimum sentencing legislation was supposed to do”.

When Shrien Dewani was acquitted in 2014 of murdering his wife Anni Dewani, ANC spokesman Zizi Kodwa noted how it “has fed into a developing perception in society that, particularly in recent cases involving gender based violence, our criminal justice system serves the rich and prominent in society rather than protecting the most vulnerable; in these instances the victims who are women.” The perception that justice is for the rich could weaken confidence in the system, he said.

Given the higher media attention on the Pistorius case and the sentence’s significant deviation from the minimum sentence, Kodwa’s comments also speak to Wednesday’s decision.

Masipa was careful to note that while public perception counts, it’s no substitute for the role of the courts as an independent arbiter. “Murder is always a very serious crime. The fact that the accused thought it was an intruder does not make it less serious,” she said, reading her decision. There were aggravating circumstances: Pistorius’s use of a high-calibre firearm and lethal ammunition, his training with weapons, firing four shots into a small space, and the pain the Steenkamp family will never get over.

But there were also mitigating circumstances, she said. Pistorius believed there was an intruder, he felt vulnerable without his prosthesis, he tried to save Steenkamp when he realised he had shot her. The judge dismissed claims from Reeva’s father Barry that there must have been an argument before the murder and, crucially, she believed Pistorius had shown remorse after his public apology and his attempts to meet and apologise to the Steenkamp family. “It is my view that it must be one of the most difficult things for any accused to have to face the victims of his crime and apologise,” she said.

“I have taken all the above into consideration and am of the view that mitigating circumstances outweigh the aggravating factors. I find that there are subtantial and compelling circumstances which justify a deviation from the imposition of the prescribed minimum sentence of 15 years,” said Masipa.

“Nothing that this court will do or say today shall bring back the life of the deceased,” she said, but then showed her sympathetic side. “The life of the accused shall also never be the same. He is a fallen hero. He has lost his career and is ruined financially. The worst is that having taken a life of a fellow human being in the way that he did, he cannot be at peace.”

“I am of the view that a long term of imprisonment will not serve justice in this matter,” concluded Masipa.

After the sentencing, Pistorius was immediately taken to Kgosi Mampuru II prison. In his previous stints while locked up there, there have been reports that he was given advantages in prison, but Moodley said his rights must be met and he could help improve the system for other inmates.

“As a disabled inmate, Oscar should receive reasonable assistance in prison. That is a right, not a privilege. Because of his fame and strong legal representation he will, in all likelihood, be treated well and be provided adequate conditions in terms of his disability. He is high-profile news and our hope is that through this probable privilege he will raise awareness for other inmates who are disabled and not given the same treatment or best standard of care,” she said.

Barring an appeal changing the sentence, Pistorius is eligible for a conversion of sentence in 18 months that could see his time served on correctional supervision, and in three years he will be eligible for parole.

Pistorius’s team have said they won’t appeal the sentence, but the state has indicated that it might take the matter to the SCA. Maseko said it was difficult to predict whether an appeal against the sentence might be successful. The higher court is confined by Masipa’s judgment and cannot ask itself what it would deem appropriate, but must ask whether the sentence induced a sense of shock.

A six-year sentence for murder seems shocking, particularly in comparison to other cases, but whether an appeal court overturns Masipa’s judgment or not, for the public, the damage has largely been done. Pistorius murdered someone and a court found he should spend less time in jail than some robbers. In South Africa, the race and class element to the case is obvious and for many it will speak volumes about the state of the country. DM