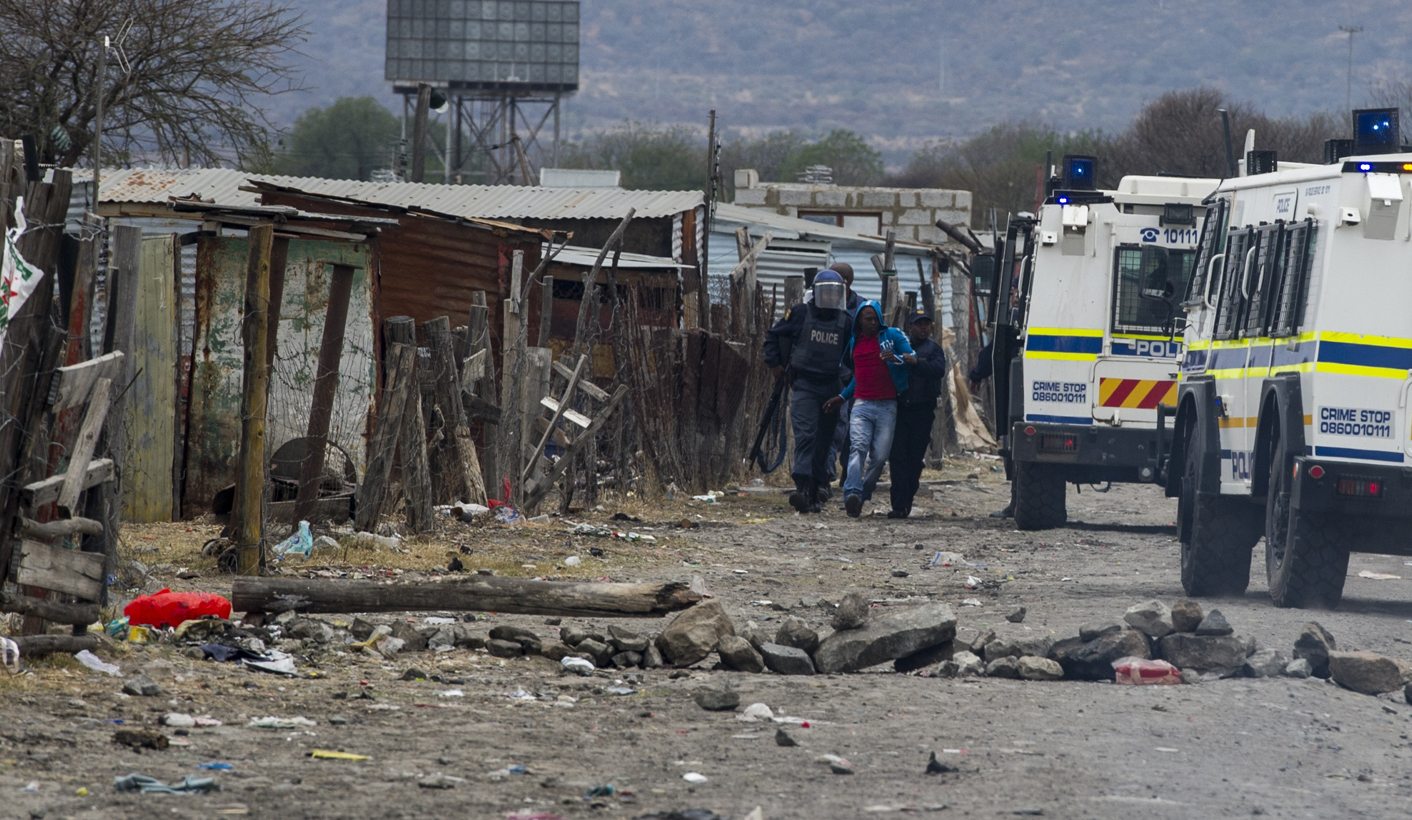 Every day, South African police officers and prison wardens go to work, armed with legal tools that can be used to torture. Electric shock devices, tonfas, pepper spray and rubber bullets are classified as non-lethal weapons and therefore are assumed to be a safer alternative to guns. But the Omega Research Foundation (Omega) and the Institute for Security Studies (ISS) warned during a conference last week that they can be potentially lethal tools of torture. By RUTH HOPKINS and MARCHÉ ARENDS.

Omega and the ISS warn that that the abovementioned ‘non-lethal’ instruments, especially electric shock devices, should be prohibited or better regulated in South Africa. Banning electric shock devices, however, is useless if the Torture Act is not enforced. Despite reports of pervasive torture in prisons throughout the country, there have been no known prosecutions of torture since the act was introduced three years ago.

The use of non-lethal weapons in prisons is governed by the Correctional Services Act (CSA). If warders intend to use force to deal with an inmate, “a minimum degree of force must be used and the force must be proportionate to the objective”. However, neither the CSA nor the Correctional Services Amendment Act actually defines what minimum or maximum force is, leaving it entirely up to the discretion of the warder in question.

When South Africa ratified the UN Convention Against Torture in 1998, and again in 2013, promulgated the Combating and Prevention of Torture Act, hopes were high that prison torture would end. The act promises that “no one shall be subjected to acts of torture”. Torture is considered to be an intentional infliction of severe mental or physical suffering by a public official, for the purpose of punishment, intimidation or coercion.

Electric shock equipment “has no practical purpose other than for torture and cruel, inhuman or degrading treatment or punishment”. the conference organisers concluded. The European Union (EU), the Council of Europe and the United Nations (UN) agree. They have either prohibited or recommended the abolition of the use of electric shock devices because they facilitate torture. The EU has banned the import and export of all body-worn electric shock instruments under its Torture Regulation.

Back home, in 2011 the then Chair of the Portfolio Committee on Correctional Services, Vincent Smith (ANC) said during a stakeholder meeting in Parliament that “electric shock equipment had to be prohibited.” But since then, very little has happened to effectuate that aim. The new chair of the Committee, Mathole Mitshegka, told the WJP: “I am unaware of that proposal. We haven’t dealt with the matter.”

James Selfe, DA member of the Portfolio Committee, also didn’t comment on a possible ban on electric shock instruments, but did state: “The DA is opposed to all forms of torture.”

In 2009, the Department of Correctional Services (DCS) bought 900 electrified stun belts and 1,400 electrified riot shields from manufacturer and DCS supplier ‘Force Products’ in Johannesburg. Strangely, on their website Force Products describes the shields as having the ability to deliver “lethal force”. Legally, though, they are classified as ‘non-lethal weapons’. Force Products was contacted for a response, but declined to comment.

In 2013, the Wits Justice Project (WJP) uncovered widespread electroshocking of dozens of inmates at Mangaung prison, run by British security giant G4S. Members of the Emergency Security Team (EST), who are known in the prison as the ‘Ninjas’, took inmates who were causing trouble or who were perceived as being troublesome, to areas in the prison where there was no CCTV. “The ‘Ninjas’ took me to a single cell, stripped me naked, poured water over me and electroshocked me,” inmate Calvin Khumalo said. “I fainted several times.”

The Wits Justice Project received reports, statements, leaked video footage and government reports that all confirm widespread electroshocking of inmates. In terms of the effects of electric shocks, inmates at Mangaung have related dizziness, welts on their skin as well as urinating blood.

On 31 March 2013, EST members took inmate Tebogo Bereng from his cell, where fellow prisoners allege he was complaining about the lack of blankets. Bereng was a known epilepsy patient. Two eyewitnesses saw EST members shocking Bereng in the corridor of the hospital, where there are no cameras. He died later that day.

None of the G4S officials involved in or responsible for, the alleged torture have been investigated, prosecuted or dismissed. The Legal Resources Centre represents 50 inmates who will be suing G4S and DCS for the alleged abuse at Mangaung prison.

Electric shock devices are a known instrument of torture but during the conference more common weapons, clustered as kinetic energy devices, were also discussed in terms of their ability to facilitate torture.

Kinetic energy devices, including batons, tonfas, truncheons, sjamboks and rubber bullets, are all legal and are used by officials throughout South African prisons and police stations. While the use of such equipment may currently be sanctioned, and even encouraged, kinetic devices are easily abused. A lack of proper regulation relating to the use of force on inmates has led to unnecessary cases of assault, torture and even death. And the fact that warders are not given adequate training when it comes to using this equipment exacerbates this risk.

A 2015 report compiled by Just Detention International – South Africa (JDI-SA) details the experiences of several correctional officials from Johannesburg. Many guards expressed their frustration with the vague nature of legal definitions. One official, who is not identifiable by name, says: “How do you use a tonfa minimally? There is no way of using it minimally… I can assure you, you can phone the Commissioner tomorrow and ask him the difference between minimum and maximum force, he can’t tell you…But tomorrow, when I use maximum force I will be in court.”

The tonfa is a rubber or wooden baton with a perpendicular handle that warders often use to control inmates. When used incorrectly, and if forced is applied to soft tissue, the tonfa can cause incredible damage.

Recently the Wits Justice Project was contacted by inmates from Zonderwater Correctional Centre in Cullinan who report being beaten with the tonfa during routine searches. In many of these incidents the tonfa was held at the wrong end, leaving the handle to make first contact, causing severe injuries like burst ear drums, swollen eyes and deep wounds on the soft skin of the feet and hands.

But this device can be used even more insidiously, as seen in the case of former St Albans inmate Bradly McCallum who in 2010 took DCS to court after having been raped with a tonfa, by a warder, while he was behind bars.

In their 2014/2015 annual report, JICS documented 2341 inmate reports of assaults by prison officials. However, despite this prevalence of violence – most likely the tip of the iceberg – the Torture Act offers little solace. Since its inception three years ago, to our knowledge, there have been no prosecutions of torture. In 2014, a hundred inmates at St Albans prison laid charges of torture under the new act. They claim they were brutally assaulted with tonfas and electric shock devices and they submitted photographic evidence to support their claims. But, according to their lawyer, Egon Oswald, there has been no follow-up. The National Prosecuting Authority (NPA) could not provide any information on torture prosecutions before deadline.

The indifference and inaction in the face of widespread torture is not limited to the NPA. Prison and police officials are known to obstruct inmates’ recourse, effectively creating a perfect feeding ground for impunity. In Zonderwater, for example, if an inmate wants to lay a charge against an official he will, more often than not, be taken from the prison to SAPS and, in some cases, will be accompanied by the very officials who carried out the assault. Retraction after assault is becoming a troubling trend, pointing to high levels of intimidation and bribery experienced by inmates.

In Mangaung prison, an administrative officer, working in the prison hospital related to the Wits Justice Project how prison officials would tamper with medical files, often making sure they disappear. Inmates at prisons throughout the country have furthermore complained to the WJP that they are denied access to medical staff and police officers, following incidences of torture.

It seems that in cases of assault and torture, carried out by warders using legal weapons, inmates are largely left to fend for themselves.

DCS was repeatedly asked for a response, but failed to comment. DM

Ruth Hopkins and Marché Arends are journalists with the Wits Justice Project.

Photo: Police had running battles with residents of Nkaneng shantytown. Burning and rock barricades were then set up in the township and police shot at, teargassed and also arrested some 14 residents. Many of the injured were women, one of which died. Nkaneng, Marikana, North West. South Africa, 15 September 2012.