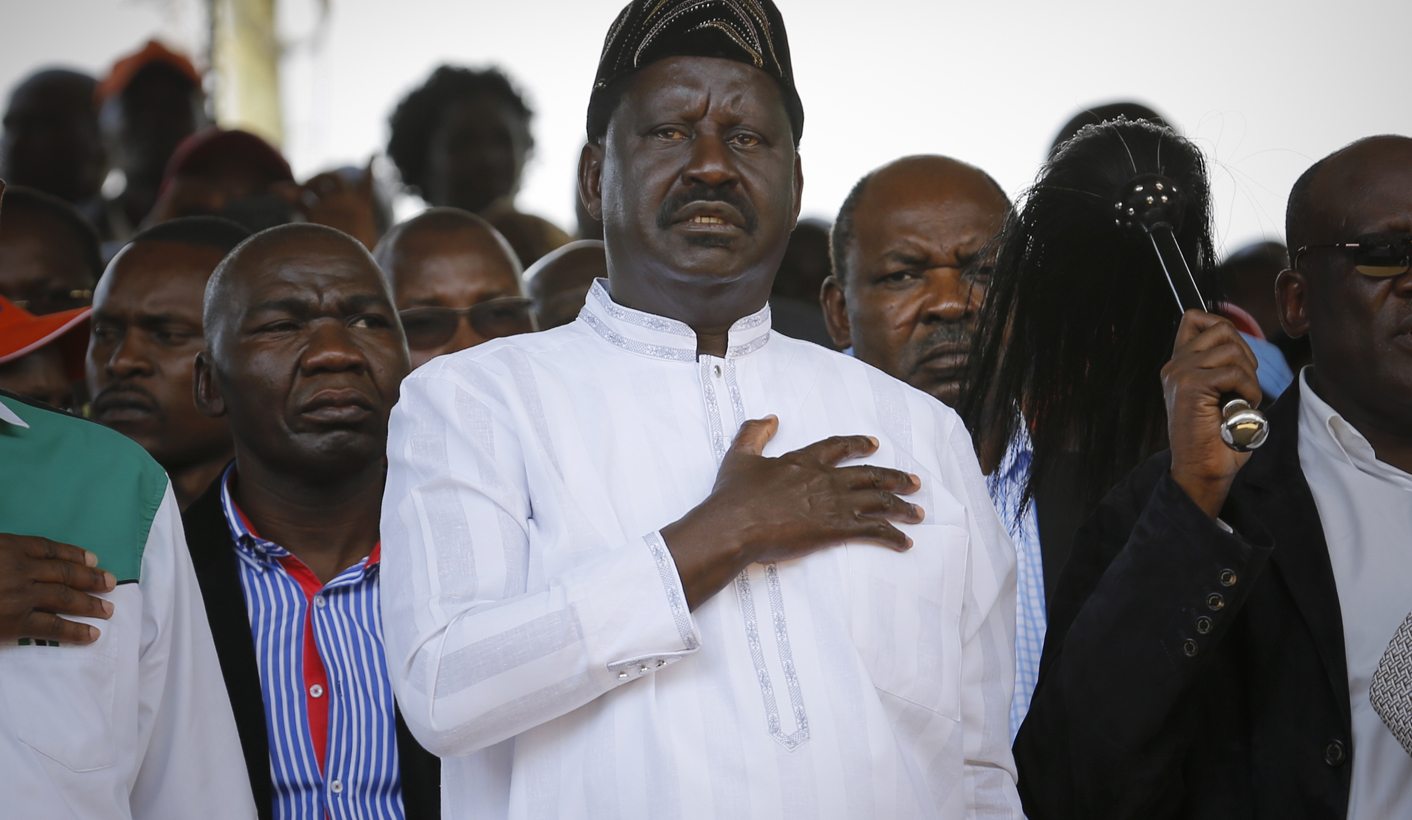 As their leadership battle heats up, the divisions within Kenya’s official opposition coalition are becoming wider, and uglier. But with a presidential election scheduled for next year, can the opposition afford not to present a united front? By NJERI KIMANI.

The first sign of trouble came when the Coalition for Reforms and Democracy (CORD) put forward three candidates to run for the presidency in next year’s election. Far from putting on the united front necessary to defeat incumbent Uhuru Kenyatta, so far Kenya’s official opposition appear to be less CORD, and more discord.

With only four weeks left to make a decision, the coalition is deeply divided over who will be their official flagbearer. Three senior figures have so far put their hat into the ring: Orange Democratic Movement leader, and current CORD leader, Raila Odinga; Wiper Democratic Movement leader Stephen Kalonzo; and Forum for the Restoration of Democracy leader Moses Wetangula.

Odinga starts as the favourite. He’s been the coalition leader since its inception in 2012, and has launched a sophisticated digital campaign this time round which belies his advanced years. He’s 71 years old, which some critics have argued is retirement age. Odinga, however, maintains that he has still got what it takes to perform the functions of head of state (and besides, there are plenty of African presidents older than he is. In Zimbabwe, Robert Mugabe still appears to be going strong at 91 – although his is perhaps not an example that Kenyans wish to follow).

But Odinga faces stiff competition this time round – and his supporters aren’t responding very well to the challenge.

Scuffles broke out when Wetangula launched his own candidacy as other CORD members tried to stop him. One man threw a tear gas canister at the podium where Wetangula sat, while two people were injured in the fighting between rival groups of supporters. Odinga, despite promising to attend, was conspicuous by his absence.

Addressing the crowd later, Wetangula said that it was “dangerous to stand in the way of an idea that its time has come and it’s now. The time for Weta has come,” he said.

Wetangula is promising to create job opportunities for youth, as well as to revive local industries. He also pledged to have a government that will follow the rule of law.

The other candidate, Kalonzo, had initially promised to play second fiddle to the others. “I am ready to be behind Raila, Wetangula or any other candidate for us to salvage Kenya,” he said last month – shortly before announcing his own candidacy.

The leadership confusion is prompting some to wonder whether CORD has now served its purpose, and whether it’s time for a new opposition coalition to contest the 2017 polls. Among the sceptics are Machakos Senator Johnstone Muthama, from the Wiper Democratic Movement, who told Daily Maverick that it was time to dissolve CORD.

There are doubts too about the loyalties of Orange Democratic Movement secretary-general Ababu Namwaba, who did not participate in the recent protests against the Independent Electoral and Boundaries Commission, which was organised by CORD. Although Namwaba said he was on paternity leave when the demonstrations took place, he has been accused by other party officials of planning to decamp to the ruling Jubilee party. He denies these accusations.

Meanwhile, there is no doubt that Jubilee is enjoying the fractures within opposition ranks. Kiambu Senator Kimani Wamatangi, a Jubilee bigwig, was not shy in dishing out the criticism. “They are confusing their supporters. They do not have a clear plan as to how they want their leadership to run and their structures are not in place. This has led to disgruntlement among the people on the ground and which will eventually play to their disadvantage,” he said.

Wamatangi pushed the shadenfreude even further. “It’s clear that they do not know what they want as a party. I wonder how they claim they can lead a nation yet they cannot solve simple party issues,” he added.

Nakuru County Accountability Forum chairman Joseph Omondi said CORD’s internal divisions were a result of each potential leader trying to respond to pressures in their own political back yard. “Kambas, where Kalonzo originates from, and Luhyas, where Wetangula originates from, feel that now is their time to rule. They feel that this is the last bullet for ‘Baba’, as Raila is popularly called, and so would try anything to ensure that the party does not lose in 2017,” he added.

“Supporters feel that if Raila cannot make it he should step down and allow other people to rule. The one man syndrome is what is slowly tiring the supporters.” DM

Photo: Former Prime Minister and the opposition leader Raila Odinga looks on as he joins others in singing national anthem during a rally held by the opposition Coalition for Reforms and Democracy (CORD) in Nairobi, Kenya, 01 June 2016. EPA/DAI KUROKAWA