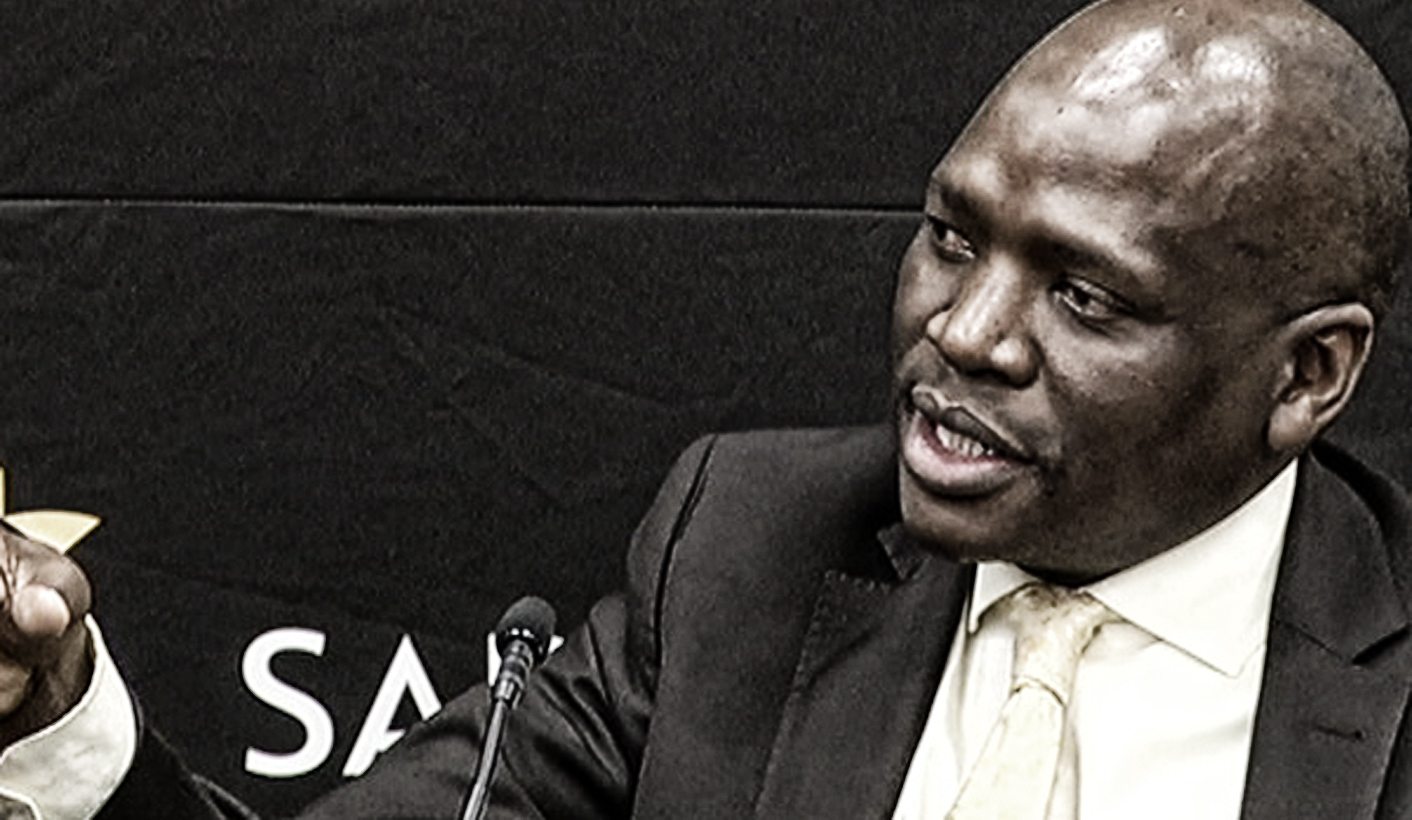 The SABC and Hlaudi Motsoeneng have faced repeated criticism and protests, but this year’s editorial policy changes, suspensions, and the resignation of acting CEO Jimi Matthews have led to an unprecedented outcry. As the COO’s supporters found their voice on Monday, the battle lines have been drawn. By GREG NICOLSON.

After a delegation of media representatives, civil society and unionists held an inconclusive meeting with Hlaudi Motsoeneng on Friday, efforts to persuade the most powerful man at the SABC on Monday failed as a delegation was locked out of the SABC and a planned meeting with the COO was scrapped.

Always controversial, Motsoeneng has faced increased pressure this year after making a number of unexpected and sweeping changes to editorial policy, particularly the decision not to broadcast images of violent protest. Demonstrators outside SABC offices on Friday said the policy amounts to censorship, preventing voters from accessing information in an election year.

Three staff members have been suspended for arguing that the public broadcaster should have covered a recent non-violent protest by Right2Know outside its offices while another four face suspensions for questioning the editorial decisions and culture at the SABC.

“Hlaudi Motsoeneng has lied to us again. He didn’t bother to even turn up for a meeting he committed himself to, to address the current suspension of several SABC staff who are now facing disciplinary action on Friday,” said a statement from the Civil Society Action Group Against SABC Censorship, including the SOS Coalition, Right2Know Campaign, Broadcasting, Electronic Media and Allied Workers Union, Media Workers Association of South Africa, and Zwelinzima Vavi, representing the new federation of unions.

On Friday, Motsoeneng reportedly said he didn’t know why journalists had been suspended, but committed to meeting the group on Monday. “The SABC’s refusal to lift the suspension of seven journalists is a direct threat to the ability of the public broadcaster to report freely and fairly on the upcoming local government elections which are just under a month away,” said the coalition on Monday.

They claimed “censorship in the SABC, coupled with Motsoeneng’s rule by diktat” violates the law, limits journalists’ ability to report independently, and will prevent voters from accessing information needed to make an informed decision. “This fight is not over. We will be back here on Wednesday,” they said. The Right2Know group on Monday held a planning meeting on how to confront issues at the SABC.

Motsoeneng is still appealing court rulings against his appointment as COO, but his changes to editorial policy face more immediate challenges. The Helen Suzman Foundation has filed an urgent court application against the SABC, its board, Motsoeneng, and Minister of Communications Faith Muthambi. The foundation wants urgent relief pending a final determination, including “suspending the implementation of the SABC’s policy and practice not to cover violent and other protests, as well as relief preventing the SABC from adopting or implementing any censorship policy which would be contrary to the mandate of the public broadcaster”.

The Independent Communications Authority of South Africa is set to rule this week on whether the policy on violence violates the Broadcasting Act, SABC editorial policies and the broadcaster’s licence conditions.

Adding to the SABC’s challenges, trade union Solidarity on Monday said it will apply for direct access to the Constitutional Court to challenge the suspension of journalists Thandeka Gqubule, Foeta Krige and Suna Venter, arguing that the suspensions concern South Africans ahead of the elections.

“We believe the case is of public interest. Therefore, it is imperative that we should obtain access to the Constitutional Court before the elections in order to ensure that the public has access to the necessary information to be able to make an informed choice,” said union deputy general secretary Johan Kruger.

The SABC has said protesters don’t represent South Africans and the public broadcaster should be allowed to continue its internal disciplinary actions without interference from those with agendas.

But the Congress of the People has also said it plans action against the SABC. After acting CEO Jimi Matthews resigned last week, apologising for decisions he took part in and describing a corrosive atmosphere at the SABC, he told eNCA on Sunday that when Julius Malema began to be a “nuisance” in the ANC Youth League and then formed the Economic Freedom Fighters, “the view expressed by the SABC was that it would not be a good idea to give Malema air time”. Matthews admitted to taking the decision but said “it was a decision bigger than Jimi Matthews” and said he should have fought against it.

“We now have evidence that the forthcoming elections will be neither free nor fair because of the skewed reporting and conspiratorial decisions of SABC editors against opposition parties,” said a statement from COPE on Monday. The party plans to approach the Public Protector, ICASA and the Broadcasting Complaints Commission requesting investigations into the SABC and ANC for abuse of power.

The EFF has protested against SABC’s coverage of the party and a Media Monitoring Africa study found SABC platforms provided significantly less coverage of the EFF than comparative outlets.

The rising criticism against the SABC also includes former executives from the broadcaster, with seven individuals writing to President Jacob Zuma to express their concern. “The news is censored. Editorial decisions are dictated from above. The public broadcaster that the SABC had become, with an editorial code that committed the corporation to fair, balanced and impartial journalism, free from outside influences, be they political or commercial, shows clear signs of reverting back into being a state broadcaster,” said the letter. It was signed by Brigalia Bam, Professor Njabulo S Ndebele, Joe Thloloe, Allister Sparks, Govin Reddy, Mathatha Tsedu, and Barney Mthombothi – all of whom have held top positions at the SABC.

But Motsoeneng has found support. In a briefing on Monday, actors and musicians backed Motsoeneng due to his decision to increase the amount of local music and TV programmes on SABC stations. They feared the campaign to remove him could reverse the quota increases and said critics were against transformation and boosting South Africa’s creative industries.

Jazz artist and South African Music Movement leader Don Laka, who lobbied for SABC radio stations to play 90% local music, said they will continue to fight for the “90/10” policy, which was announced in May. Actor and Creative and Cultural Industries Federation of South Africa president Tony Kgoroge said, “If those who own the value chain are standing against Hlaudi we have to stand up and face them face-to-face without no fear.

“Are we using violence as a form of entertainment to entertain our country or are we reporting fairly to what is happening whether good or bad?” Kgoroge asked, regarding the SABC policy on protests.

Defending Motsoeneng, other speakers blamed criticism on capitalism, white people, and the Democratic Alliance. The COO was called a “Moses of the music industry” targeted by “a devil’s alliance”. A “Friends of Hlaudi” leader promised mass action in support of Motsoeneng would begin on Wednesday and said the group would submit a memorandum at the DA’s Johannesburg offices later this month.

In a statement, the ANC Youth League backed SABC management, saying Matthews should not speak about his time at the public broadcaster. The league suggested foreign interests were behind the current criticism.

“These attacks have seen, some in our country suggesting that there is something wrong at SABC or its leadership thus a need for a probe. In the view of the ANCYL these attacks are nothing but acts of cowardice,” said ANCYL spokesman Mlondi Mkhize. “Those that have resign must go relax at home.”

The statement contradicted the latest stance from ANC spokesman Zizi Kodwa. Last week Kodwa was critical of those protesting at the SABC but he has since called on the SABC board to investigate the “serious” allegations against Motsoeneng.

Meanwhile, South Africa has been criticised by global free press organisations at the United Nations for voting for amendments proposed by China and Russia to a resolution promoting the human rights on the internet. The resolution, backed by most states, sought to reach a commitment on freedom of expression and privacy online. It included a commitment to investigate attacks on internet users such as bloggers and a resolution not to limit online information during crises. South Africa was one of the countries that voted for amendments proposed by China and Russia to remove references to freedom of speech and limiting internet access. DM

Photo of Hlaudi Motsoeneng by eNCA.