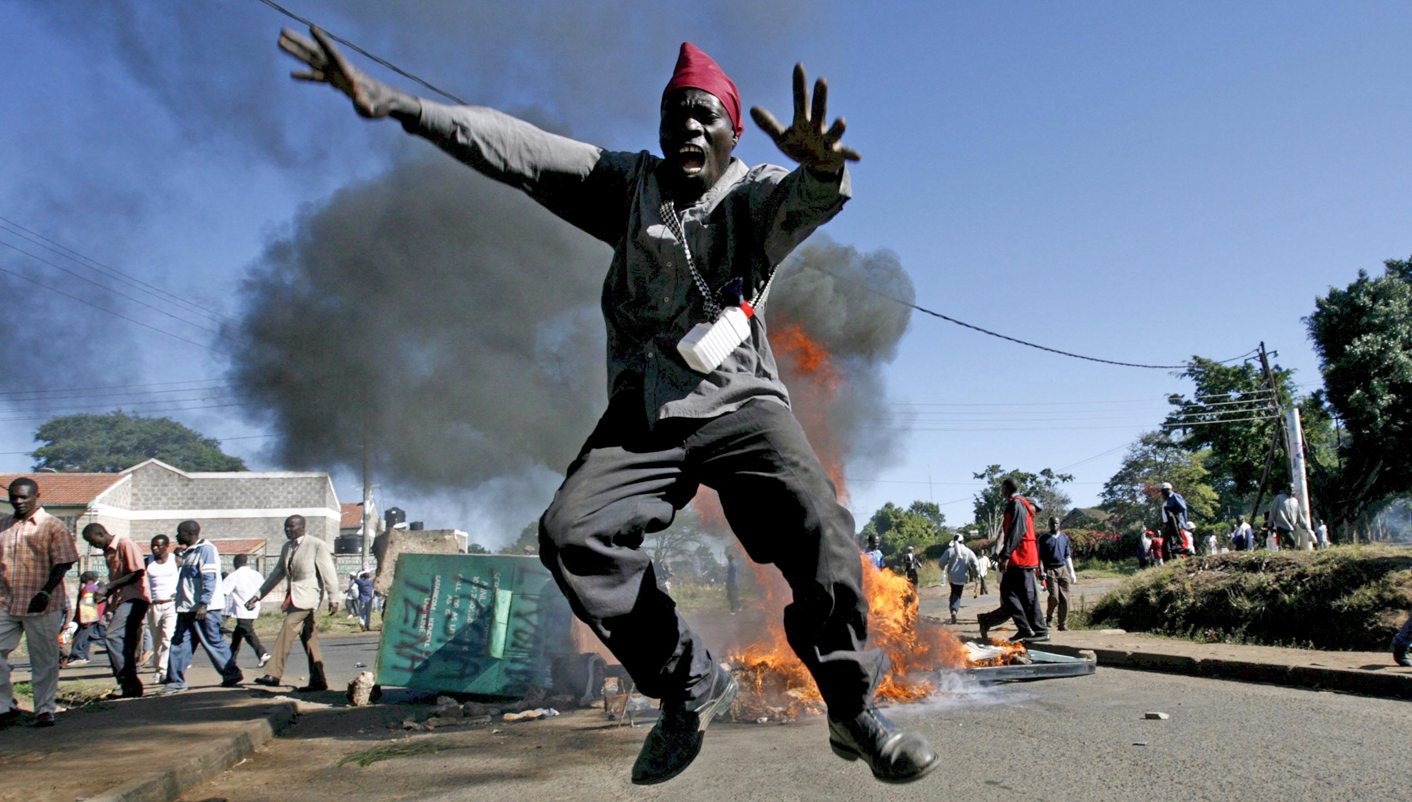 No Kenyan leaders have been successfully prosecuted for the post-election violence of 2007-2008, even though more than 1,000 Kenyans were killed in the politically-motivated bloodletting. With extrajudicial killings on the rise, it’s hard to escape the conclusion that Kenya’s culture of impunity is alive and well – and continues to have fatal consequences. By SIMON ALLISON.

The last time they were seen alive, Josephat Mwendwa, Willie Kimani and Joseph Muiriri were in a cell in a police station just outside Nairobi.

Mwendwa was a boda-boda (motorcycle taxi) driver, who had filed a complaint against the police alleging harassment. Kimani was his lawyer, a well-respected investigator for the International Justice Mission, a global organisation that seeks to protect the poor from violence. Muiriri was a taxi driver who was ferrying Mwendwa and Kimani from their last court appearance on Thursday, 23 June – a journey they never completed.

Their mysterious disappearance sparked a massive public outcry, unsurprising given Kimani’s status and connections within Kenya’s human rights community. Witnesses said they had seen the trio in a cell at Athi River police station, but they weren’t there any longer.

Just over a week later, the bodies of all three were found at the bottom of a river. Kimani’s arms and legs were tied.

Suspicion fell immediately on the police. And sure enough, on Sunday, three police officers – Fredrick Leliman, Stephen Chebulet and Silvia Wanjiku – were arrested in connection with the triple murder.

According to Kenya’s Attornery-General Githu Muigai, the crime was a one-off. He blamed “rogue actors”.

“It is the government’s position that the incident currently under investigation is to be treated as a case of individual criminal action of a rogue actor acting outside of the rule of law. Consequently, the government will spare no effort to bring those responsible in their singular and individual culpability to book whatever their status or affiliation. The contradictory actions of individuals propelled by motives other than the rule of law will not be tolerated,” said Muigai.

Statistics from the Independent Medico-Legal Unit (IMLU), a Kenyan anti-torture NGO, tell a rather different story. In an October 2015 report, it noted that incidents of lethal police action – what it terms extrajudicial executions – had been rising for two years. “To put this into more perspective, last year (2014) we recorded a total number of 199 people killed by police. Out of these, 181 were summarily executed, 14 were shot to protect life and four were killed in unclear circumstances. This year we have recorded 97 cases including 85 summary executions, and six killed in protection of life by police officers and Kenya Wildlife Service,” said IMLU.

The sheer volume of these alleged summary executions suggests that the Attorney-General is wrong: this is not a one-off, and the perpetrators are not “rogue agents”. The deaths of Kimani, Muiriri and Mwendwa were remarkable only for the unprecedented public attention received, not for the alleged involvement of the police.

Clearly, this is a systemic issue.

When President Uhuru Kenyatta and Deputy-President William Ruto were elected in 2013, they were simultaneously preparing for trial at the International Criminal Court. Along with four other co-accused, they were charged with crimes against humanity in relation to the post-election violence which tore the country apart in 2007-2008. An estimated 1,113 Kenyans died in the violence.

But Kenyatta and Ruto never did have their day in court, not really. The pair waged a masterful campaign to force the ICC to withdraw the charges, using every state resource at their disposal. ICC prosecutors suddenly found that Kenyan authorities refused to comply with even the most basic requests. Kenyan diplomats travelled the continent to persuade the African Union that the ICC was biased against Africans. Key prosecution witnesses disappeared, or suddenly refused to testify.

Kenyatta and Ruto won their campaign. The charges against all six of the accused were withdrawn, much to the frustration of ICC prosecutors. More significantly, the decision meant that nearly a decade after one of the bloodiest periods in Kenyan history, no Kenyan leader has been held responsible; 1,113 people were killed and no one is even on trial for their deaths.

In this context, Kenyan police can hardly be blamed for thinking that the law doesn’t apply to them either. They’re just playing follow the leader – except that this game happens to fatal.

In the wake of lawyer Kimani’s death, his organisation called on Kenya to end this culture of impunity with immediate effect. “We are demanding the immediate end of police abuse of power in Kenya in solidarity with our dear colleague, Willie; client, Josephat; trusted driver, Joseph, and all those who have fallen victim to the outrageous impunity that has come to plague the nation of Kenya in this era. Today, we’re calling on President Kenyatta to quickly align himself on the side of justice by taking bold action in the swift prosecution of all those involved in this horrific murder and removal of the head of the Administration Police, Deputy Inspector General Samuel M. Arachi,” said International Justice Mission head Gary Haugen, in support of an online petition.

Somehow, it’s hard to imagine these fine words falling on anything but deaf ears. There’s a culture of impunity in Kenya, and it starts at the very top. DM