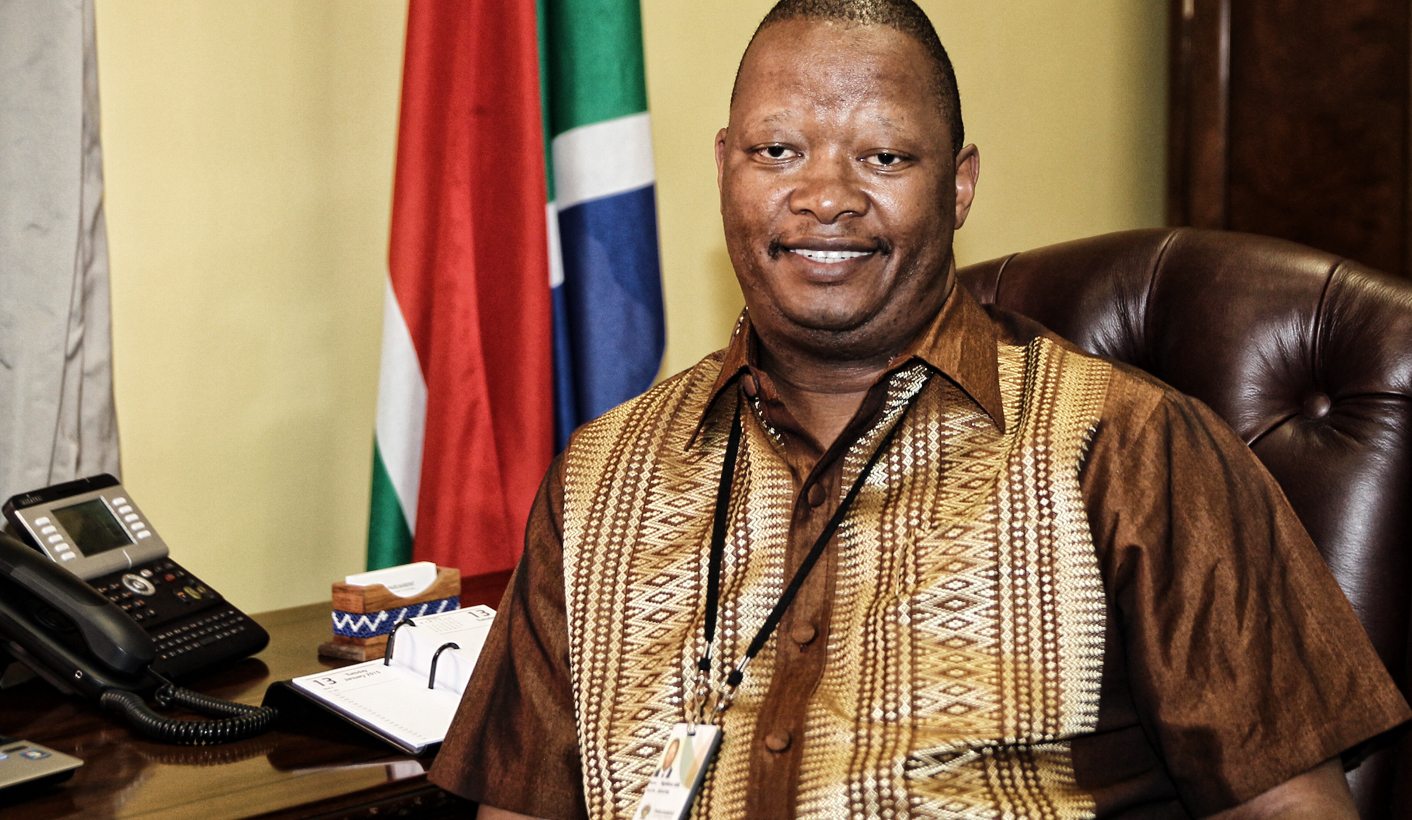 A strike is looming at Parliament following the suspension of at least two National Education, Health and Allied Workers’ Union (Nehawu) senior members late on Tuesday. If it goes ahead, the work stoppage would be the second in eight months amid a tense labour relations environment, with unresolved matters outstanding from last year’s unprotected strike – and a stand-off to see who blinks first. By MARIANNE MERTEN.

Late on Tuesday, Nehawu parliamentary branch chairman Sthembiso Tembe and another Nehawu member whose name is known received notices of their suspension, Daily Maverick has learnt from two union sources.

Both union members were among the four charged with gross insubordination/gross misconduct after the first of two unsuccessful staff meetings called last week by Secretary to Parliament Gengezi Mgidlana. The disciplinary hearings for all four are set down for Thursday. It remains unclear why only two of the four were suspended.

Earlier on Tuesday Nehawu’s parliamentary branch decided that should suspensions be enacted, its members would down tools in what could be described as an echo of the “hands off our leaders” campaigns in the 1980s. Nehawu represents over 1,000 of the national legislature’s 1,389 employees from across the committee, documents, language and research units, as well as cleaners and caterers. The branch at Parliament is the biggest in the Western Cape.

The two suspensions came after meetings between Parliament’s senior managers and Nehawu’s regional representatives. It is understood the meeting discussed the disciplinary charges against Tembe, a Nehawu shop steward and two other union members, brought after last week’s first unsuccessful staff meeting.

Parliament has taken a hard line against the union. In the aftermath of both of last week’s abortive meetings, it promised “appropriate action… as part of Parliament’s internal process”. Charging Tembe, and a shop steward whose name is known to Daily Maverick, with gross insubordination would enable Parliament – if they are found guilty – to dismiss them. Effectively, such a turn of events would remove a union’s organisational capacity from the national legislature, perhaps in the hope for more pliant union officials.

Parliament’s spokesperson did not respond to a request for comment by late Tuesday evening.

Meanwhile, Nehawu at Parliament faces a tough test: if a work stoppage, or at least a protest or pickets, do not materialise as per Tuesday’s resolution, the union would have lost standing. It’s a tough test for the iKapa regional leadership, just days after their congress. And it also could have implications for Nehawu’s national office-bearers, who have been supportive. A series of meetings with Parliament’s presiding officers to find a political solution did not find success.

Ironically, Nehawu at Parliament held off on labour action pledged last month by union president Mzwandile Makwayiba and deputy general secretary Zola Sapetha, who called for the removal of Mgidlana for selectively implementing various labour agreements, and embarking on overseas trips to benchmark other parliaments at a cost of R1.8-million. The national office-bearers gave Parliament 14 days to positively respond to this demand, or face an “ungovernable institution”. That deadline came and went.

To date, Nehawu’s parliamentary branch has used every option in the book, inlcuding going to the Commission for Conciliation, Mediation and Arbitration (CCMA) to resolve a swathe of issues outstanding from last year’s unprotected strike over performance bonuses and conditions of employment. About seven month after the December 2015 return to work agreement, the CCMA process appears stuck over the question of finding suitable dates for the next round of meetings.

Matters again came to a head on Tuesday last week, at the first of two staff meetings Mgidlana called. At that meeting Mgidlana was asked why documents for the meeting had been distributed to staff beforehand to enable a meaningful discussion, and why labour issues outstanding to the unprotected strike last year had still not been fully resolved.

According to Nehawu, Mgidlana told one of its members to “take a chill pill” and walked out. According to Parliament, Mgidlana adjourned the meeting after several disruptions.

A second meeting on Thursday led to a Nehawu walkout when union members asked why the Secretary to Parliament kept on talking down to them. “Every time we want to speak, we get spoken down… It is painful to wake up and come to work in this institution,” said one woman union member. After the walkout, Mgidlana continued with his senior managers and a few others to hold what Parliament later described as a “successful” meeting.

Co-incidentally, the agenda to those meetings, which Daily Maverick has seen, centred on various managers’ presentations on the institutional and financial performance in the fourth quarter of the 2015/16 financial year ending 31 March 2016. The institutional performance report had been submitted to National Assembly Speaker Baleka Mbete, who in early May tabled it.

In that report, Parliament admits to a worsening labour relations environment. Under the heading “employee relations incidents” it notes more than 300% increases in disputes from five to 18 and disciplinary proceedings from three to 11 in the 2014/15 financial year, compared to a year earlier. “Based on the number of external disputes lodged … there seems to be a lack of trust in internal processes for dispute resolution where parties are not willing to reach a compromise on their mandated position,” the 21-page report says. DM