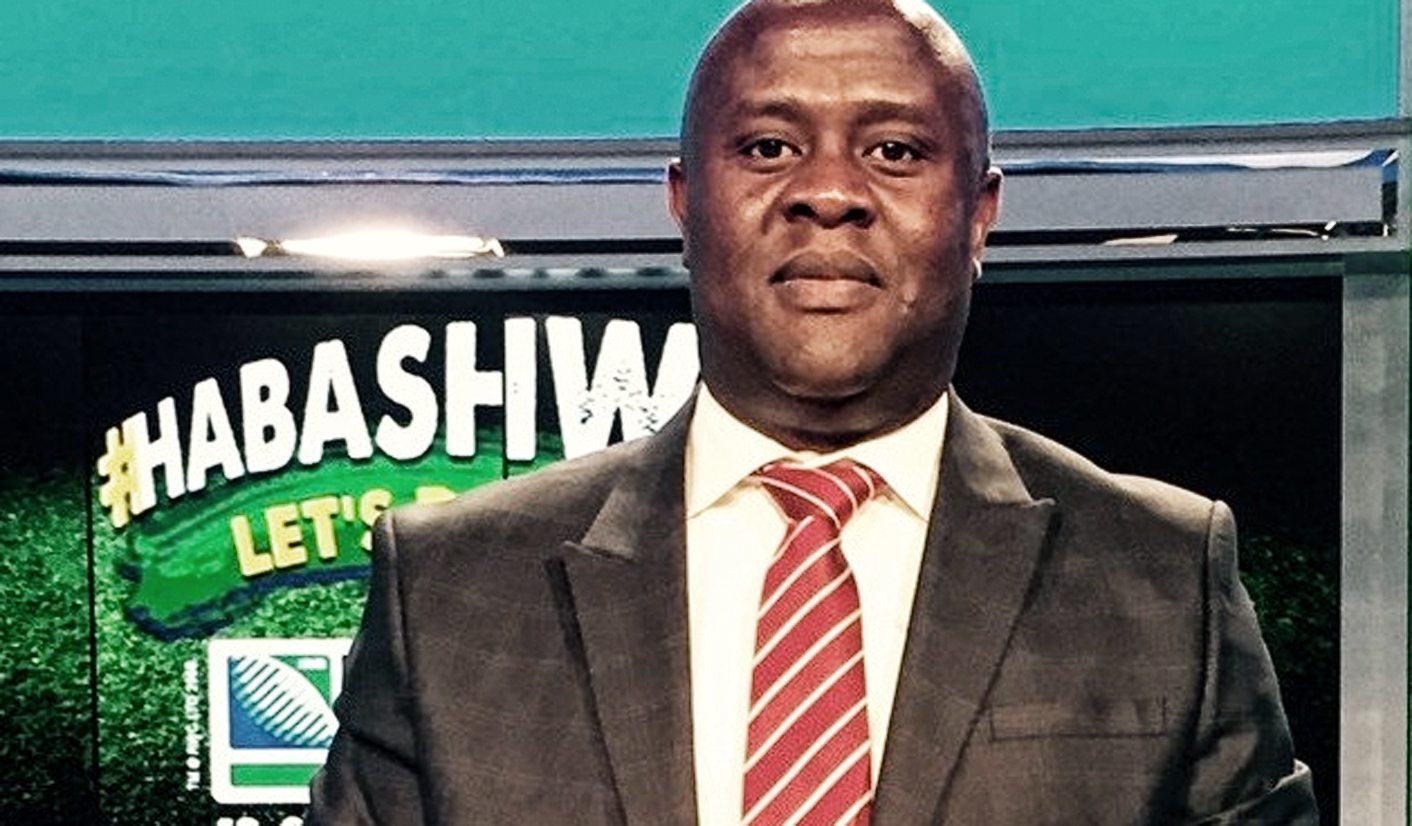 As the fallout over SABC acting CEO Jimi Matthews’ resignation continues, the public broadcaster has named a new boss: James Aguma. Government, Hlaudi Motsoeneng and the ANC have questioned the timing of Matthews' decision, while opposition parties claim Aguma will continue to take the SABC down the wrong path. By GREG NICOLSON.

A day after Matthews announced his resignation, the SABC appointed a new acting CEO on Tuesday. SABC board chair Professor Mbulaheni Maguvhe announced the appointment of James Aguma as acting CEO during a special staff meeting at the SABC’s Auckland Park offices.

Matthews’ resignation on Monday, citing a “corrosive atmosphere” and saying “what is happening at the SABC is wrong”, came as three SABC journalists called into question the public broadcaster’s recent editorial decisions and another three were reportedly suspended for questioning the new policies. SABC chief operating officer Hlaudi Motsoeneng, firmly in control of decision-making at the public broadcaster, was quick to try to move on from the scandals.

“When one or two persons cough‚ it does not mean all of us have flu. People at SABC are very excited. There is no revolt within the organisation,” Motsoeneng said at a press conference on Tuesday. “There is no censorship at the SABC. We said the role of editors is to edit. Sometimes they change your headlines.”

There has been a call for colleagues of Matthews from elsewhere to gather outside the SABC in Auckland Park at 08:00 on Friday to protest in solidarity with journalists at the broadcaster. Journalists in Cape Town, too, are called on to gather at the SABC studios in Sea Point. The journalists are asked to dress in black and carry placards saying #journalistrights, while SABC staffers in support of their media colleagues will bear placards saying #notinmyname, it is reported.

Last week, SABC economics editor Thandeka Gqubule‚ RSG executive producer Foeta Krige and Afrikaans news producer Suna Venter were suspended, reportedly for challenging a decision in an editorial meeting not to cover protests at the public broadcaster against censorship. Three other senior journalists have written to the COO requesting a meeting over low morale and uncertainty over their role as journalists given recent policy decisions. Motsoeneng recently announced that the SABC would not display images of violent protests, claiming they promote more violence, and news reports allege he told journalists to cover the president in a positive light.

Motsoeneng said Matthews’ resignation had surprised him. He suggested it was part of efforts to destabilise the SABC. The COO received support from the board with Maguvhe publicly backing him at the press conference.

ANC spokesman Zizi Kodwa on Tuesday claimed Matthews should have taken his issues up with SABC management, the board, and the minister, rather than making the SABC “a laughing stock in the manner he has done”. Kodwa suggested that because Matthews didn’t raise his problems within the organisation he might be a part of an agenda to influence the broadcaster politically. The ANC has supported Motsoeneng’s recent controversial editorial decisions. Matthews has not spoken on whether he made attempts to challenge the “corrosive atmosphere” within the SABC but in his resignation letter said he believed he could “be more effective inside the SABC than outside”.

Chairman of the Portfolio Committee on Communications, Humphrey Maxegwana, on Tuesday said Matthews’ resignation was worrying. “It is concerning to see an executive member of staff, charged with the strategic responsibility of navigating the company, deciding to resign unceremoniously. Mr Matthews was an asset to the public broadcaster and has formed part of the team of diligent men and women who steered the SABC to its financial stability,” said Maxegwana. He remained confident the SABC could handle the transition and said the parliamentary committee would get a briefing from the board following the elections.

Whether or not the SABC’s public challenges continue will probably depend on the reaction to recent events by the broadcaster’s staff. In the meantime, attention has turned to newly-appointed acting CEO James Aguma, one of many to fill the role in recent years.

Aguma was appointed acting SABC chief financial officer in March 2014 after the dismissal of Gugu Duda, who the SABC said was found guilty of misconduct by the CCMA and who the Public Protector said was appointed irregularly after interference from then Communications Minister Dina Pule. Aguma got the permanent CFO job in January 2015. He served as general manager for strategic support at the SABC between 2013 and 2014, was a senior manager at the Auditor-General for almost nine years, and worked at PricewaterhouseCoopers for five years. Aguma, a chartered accountant, was born in Uganda but has lived in South Africa for over two decades.

The Democratic Alliance claimed he is a known ally of Motsoeneng and his appointment shows there is no will to solve the SABC’s problems. “As the SABC’s CFO, Aguma would have given financial approval and support for Motsoeneng’s madcap decisions, and is therefore simply unsuitable to lead the SABC. The SABC needs a CEO who will lead the organisation without fear and favour and one who respects freedom of expression and the journalistic, creative and programming independence of the SABC. In supporting Hlaudi Motsoeneng, Aguma has shown himself not to be this person,” said DA spokeswoman Phumzile van Damme.

The SABC’s finances had a mixed record while Aguma was CFO. In 2014, the company made R358-million in profit, but it lost R395-million in 2015. SABC blamed the drop on the non-payment of TV licences and lower advertising spending, due to the poor economy. In 2012-13, the Auditor-General gave the public broadcaster a disclaimer with findings. In the last two years it improved slightly and received qualified audits with findings. Last year, the SABC incurred R413.7-million in irregular spending and R18.8-million in fruitless and wasteful expenditure, but the Auditor-General’s office said it was an improvement on the previous year. Aguma and Motsoeneng have said the broadcaster is financially sustainable.

In a speech last year at a Ugandan diaspora conference, Aguma was quoted as saying “successful entities, be it companies or governments, will survive or perish if visionary leadership is lacking, if policy clarity and coherence is absent, if nurturing of talent is more of an accident than an outcome of deliberate action and if those most affected by policy decisions are left out of its development”.

“If the tone from the top doesn’t relay a message of strict accountability, meritocracy and a ‘deliver or disappear’ philosophy, then these educated Ugandans may wither in frustration, or worse still join the legion of ‘wise guys’ who reap where [they] didn’t sow,” said Aguma on Uganda’s issues.

In a report from the recent Third Forum on China-Africa Media Co-operation, SAnews noted Aguma backing Motsoeneng’s decision on increasing SABC’s local content: “Aguma said as the public broadcaster, they are spot on in terms of broadcasting 90% local content. ‘What I have learnt from the Chinese is that they are very proud about their culture and language because almost 98% of all broadcasting content is local.’”

Aguma has an impressive resume as an accountant, while Matthews had an impressive resume as a journalist. Given the reported rot at the SABC, demonstrated by Motsoeneng’s ability to make sweeping editorial decisions, allegations they amount to censorship supporting the ANC, Aguma’s lack of journalistic experience, and his links to the controversial decisions, it is unlikely the new acting CEO will challenge the status quo.

Congress of the People spokesperson Dennis Bloem issued a statement on Tuesday, which while unproven, makes damning allegations about the level of challenges at the public broadcaster.

“Both the ANC and Hlaudi Motsoeneng have been conspiring to keep news of municipalities and protests out of the public arena.,” said Bloem. “The ANC is feeling threatened like never before. Therefore the ANC is keeping Hlaudi Motsoeneng in office in open contempt of court and in violation of the rule of law. That is in itself a constitutional breach. Furthermore, censoring the news, to serve a party political end, conflicts with the ethos of the Constitution. No wonder we are witnessing a palace revolt because the situation at the SABC has become toxic, corrosive and untenable.” COPE also alleged the State Security Agency is tapping SABC journalists’ devices. DM