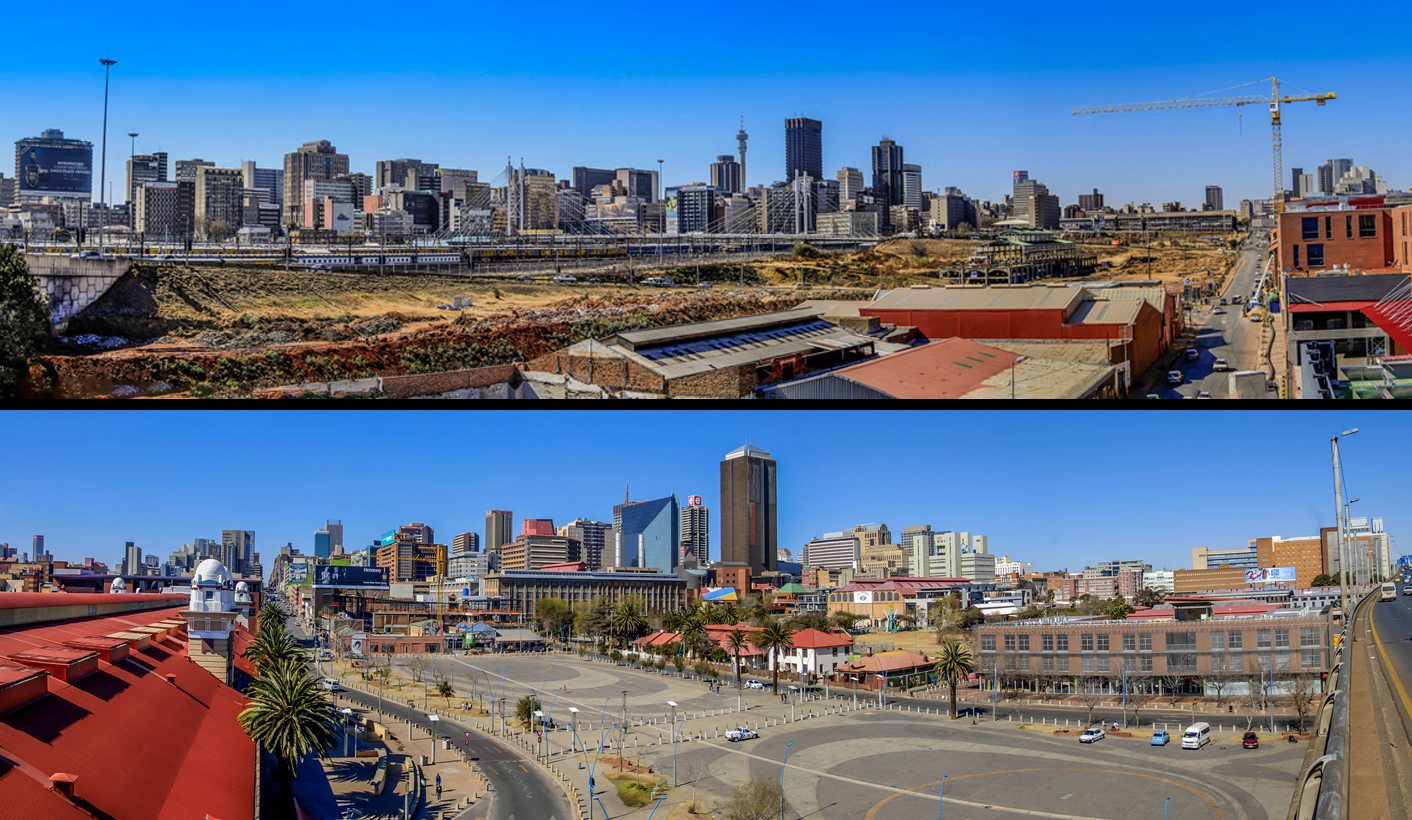 Just weeks before 3 August, new data from the Gauteng City-Region Observatory showed that the lion’s share of voters in the province had shifted towards uncertainty. The voters are undecided at the peak of election season, which means battleground Gauteng is wide open. MARELISE VAN DER MERWE spoke to the observatory’s researcher, Christina Culwick.

On Tuesday, the results of the fourth Gauteng Quality of Life Survey (GCRO) – a massive provincial survey conducted among about 30,000 people – were made public.

The release of the survey was widely reported, lending itself as it did to some fairly catchy headlines. Gauteng residents are more pessimistic about government; 40% of Gautengers are in debt; whites are happier with service delivery than blacks. Researchers further found that satisfaction with municipalities in Gauteng had declined slightly since 2013, but also – paradoxically – that dissatisfaction had dropped significantly. That means a number of people who previously held strong opinions have moved towards middle ground. But more important, says researcher Christina Culwick, it means there’s a much larger pool of potentially undecided voters.

The report gives a fascinating glimpse into the way South Africans think – and could be an invaluable handbook for politicians. Daily Maverick got the details from Culwick.

DM: Satisfaction with Gauteng municipalities has declined slightly between 2013 and 2015, but dissatisfaction has dropped “significantly”. Can you explain this?

Culwick: Essentially what we’ve seen is that there are fewer people who are definitely satisfied. They’re not going from being happy with government to being unhappy with government. They’re saying ‘Oh, I’m not sure.’ We’ve also had a lot of people going from being really dissatisfied to being undecided. The overall perception is a slightly better opinion. We’ve got a group of people who are not sure.

DM: Would it be accurate to say, then, that there are quite a lot of people who are open to persuasion?

Culwick: I think that’s exactly it. Not being satisfied is not ambivalence. It’s that you haven’t made a decision yet. So what you are saying is spot on.

DM: How did you interpret this?

Culwick: One of the questions we asked was ‘What initiatives do you think would best deal with inequality?’ We asked a range of questions: ‘Do you think we need to nationalise [inaudible]? Is the private sector creating enough jobs? Do the rich need to be taxed more?’ What came out on top – top, top, top – was that government needed to create more jobs. This, again, across the board. We were quite surprised by that. We thought we would get some interesting results regarding who is sitting on the left, who is sitting on the right. But actually, across the board, people are saying government needs to create jobs. Which is interesting, because that is typically not what government does. That is what business does. But even people from high-income groups, from the business sector, formal businesses, feel that government must create those jobs. People feel that our economy is in such a dire situation that government needs to solve those problems. I think that is one of the major things that is driving dissatisfaction with government.

DM: What else is driving this discrepancy between satisfaction with local government and service delivery?

Culwick: Satisfaction with some services, like water, is as high as 83%. Then you get 30-odd percent satisfaction with local government. You’re giving me water, but I still don’t like you. That’s why we started asking about the other factors. We picked up on government initiatives to grow the economy, but also on positive engagement with government departments. People’s opinions of their local counsellor was also a factor. In terms of satisfaction, it’s better not to know your local counsellor than for your counsellor to do a bad job!

What we’re hoping is that this gets picked up and that government says: Clearly these are some key issues that make a difference in people’s lives, and we need to work harder.

DM: The results of the survey indicate that respondents are increasingly distinguishing between government performance at national and local levels, and interestingly, that increasing levels of dissatisfaction with national government seem to go hand-in-hand with positive perceptions of local government. What’s the implication here, especially in view of the upcoming elections?

Culwick: Our survey took a bit longer than we anticipated. We were hoping for the fieldwork to take place over three to four months. It ended up taking quite a bit longer. Over the course of the survey, things like ‘Nenegate’ happened, and the Constitutional Court ruling. So we were able to track the responses over time. Because the survey is dealing with slightly smaller numbers, it’s not perfectly representative and it gives a flavour rather than absolute statistical certainty. But what we found, at the beginning of the survey, was that national government had similar satisfaction levels to previous years, sitting at about 55%. Over the course of the survey, it stayed pretty constant. December hit, and it dropped way, way down. It evened out again over the next few months. So the national events at the end of last year definitely had an impact.

What was interesting was that satisfaction with local government had an inverse trend. It started much lower than had typically been the case. Over the course of the survey, perceptions of local government actually improved. People are distinguishing between what happens at national and local level.

DM: It’s interesting that the perceptions of national government evened out after December. It’s still been a fairly tumultuous year.

Culwick: That was also something we were surprised about. We thought that they would continue to drop. We’ve conjectured some ideas about why they did not. One thought was that the Constitutional Court ruling, while certainly not positive, perhaps strengthened people’s perceptions of the democratic institution and ‘Hey, we can actually challenge government’.

DM: The Constitutional Court forms part of the general democratic structure, so its victory possibly sparked a sense of optimism.

Culwick: Yes. Another one of the stats that came out was about trust between blacks and whites. There is a question that asks, ‘Do you agree or disagree that blacks and whites will never trust each other?’ In previous years, there has been a hardening of attitudes, but this year, there has been a softening. In some ways we were confused by that. There has been Penny Sparrow, there has been Fees Must Fall. There have been very racialised conversations in the media. Part of our thinking about why we see attitudes softening overall is that maybe these conversations are now on the table and people are grappling with them.

Interestingly, white perceptions have hardened. Most of the improvements have been seen across other race groups. That said, we do not know how people interpreted the question – whether they thought of it as ‘I will never trust’ or ‘I will never be trusted’.

DM: There was a notable racial discrepancy in the survey, whites being more satisfied with services. What’s happening here?

Culwick: The areas of highest satisfaction with services are sometimes in places that were, under apartheid, classified as ‘white’. There are also areas where services are better now, and today, the people who can afford to be in these areas typically are still white. Sometimes they have a niggle, maybe their electricity was cut off or something similar, but they have services, and most of the time, they work.

Satisfaction relies on a number of factors, including what services you have access to. There is a strong distinction across races there. White populations generally have a very high quality of life, around 7.5 out of 10, compared to black populations, who come in at around 5.7. The provincial average is six and a bit.

DM: In light of what you observed post-December, do you think the recent conflict in Tshwane would ultimately have changed the survey results?

Culwick: I wonder. One of the questions we asked people was whether they had interacted with government in the last three months. Although this isn’t quite the same, we found that if they had been treated well or their recent experience was positive, their opinion of government was positive. If people felt that they were not treated with dignity and respect, their opinion across the board was negative. What’s happened in recent weeks in Tshwane would have tainted people’s perspective.

One can see on the Quality of Life Index that the worst-performing ward is just-just west of Atteridgeville. One can see hotspots on the map where there is really low quality of life, and overall in Tshwane there has been a reduction in quality of life over the last two years. There is a great deal of tension regarding what will happen in Tshwane.

DM: Are there plans to expand the survey to other provinces?

Culwick: The GCRO is very much focused on Gauteng but there is a lot of interest to set up observatories elsewhere, doing what we do. DM