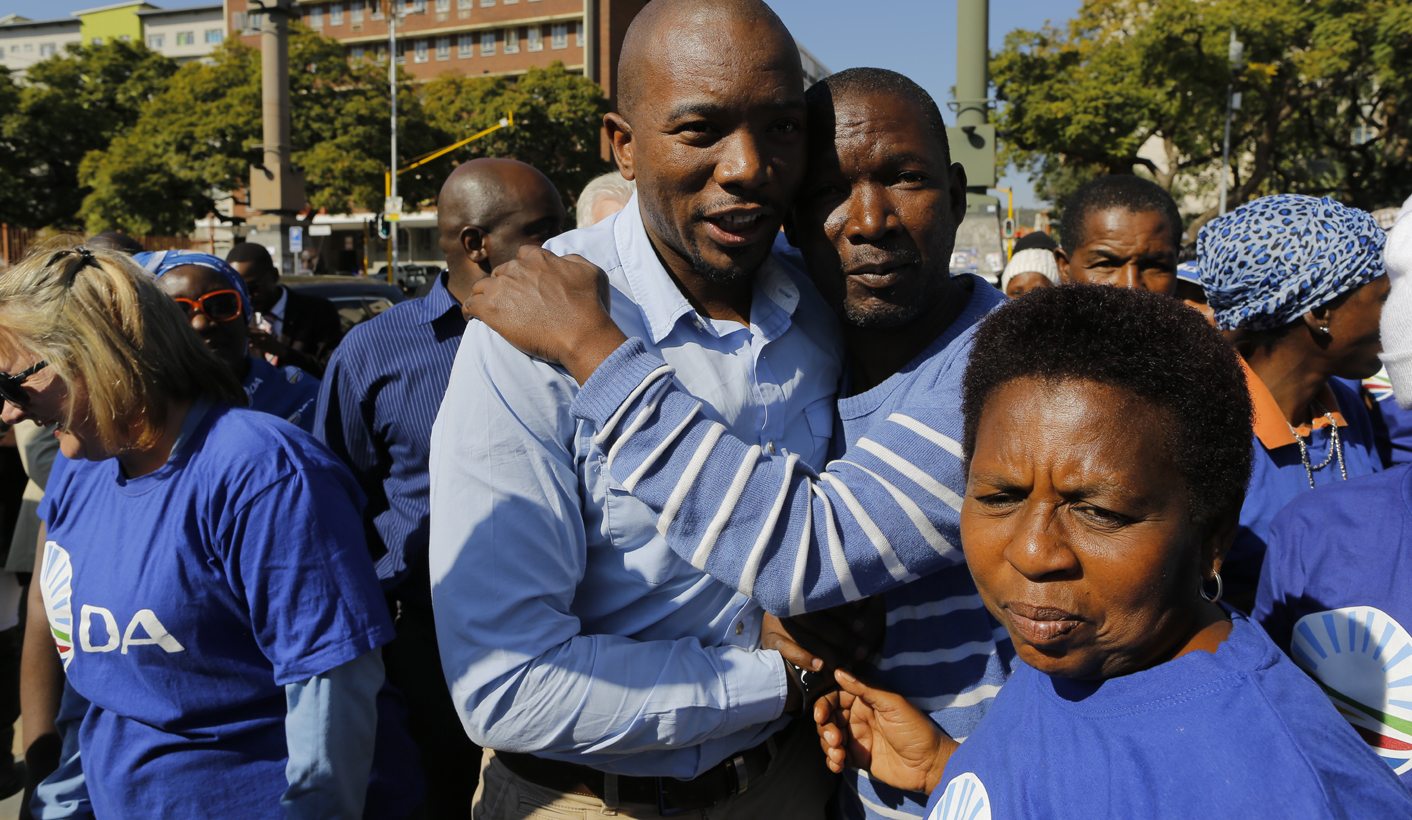 With only 37 days until the local government elections, the Democratic Alliance believes its election campaign, the biggest in the party’s history, means it has a realistic shot at taking another metropolitan municipality. For the party, which has been working for years to position itself for these elections, the chaos in Tshwane helps reiterate its core message. By GREG NICOLSON.

DA leader Mmusi Maimane on Sunday spoke confidently of his party’s chances in the upcoming local government elections, describing the campaign as the largest in the party’s history, with some candidates lobbying voters for close to 1,000 days.

“We are now running the biggest election campaign in the history of the party, in every corner of the country. We have the momentum and we can win,” said Maimane after a meeting of the DA’s federal council in Durban over the weekend. “We have as of today flighted well over one-million posters in every corner of South Africa – from Athlone to Zandspruit – and we have also distributed in excess of 5-million leaflets with millions more to come before 3 August.”

For the first time, the local government elections will see the DA field a candidate in every ward and municipality across the country. Almost since the 2014 elections the party has been working to change its public image and better articulate its values, aiming to become a credible alternative for voters in metros outside of the Western Cape.

“Everybody is involved in this campaign that has been historic,” DA federal chairman and Nelson Mandela Bay mayoral candidate Athol Trollip was quoted by SABC. “We’ve put up millions of leaflets, pamphlets, more posters and billboards than ever before; we knocked on more doors than ever before; we will continue to knock on every single door in every single community to make sure that our offer is put to every single voter who will make a decision about the future of their municipalities in our country on the third of August.”

The DA claims it is the only party to have released radio adverts and posters in all 11 official languages and on Monday the party will air a new TV advert. It features Maimane describing the election as a choice between “more corruption, empty promises, bad services and more unemployment” or “an honest government with zero tolerance for corruption, better services, many more jobs and opportunities for all”.

Declining support for the ANC in the 2014 election results and recent polling suggest the DA has a chance of winning in Nelson Mandela Bay and Tshwane, while Johannesburg is likely to be close. The DA wants to take at least one new metropolitan municipality and its mayoral candidates – Solly Msimanga for Tshwane, Herman Mashaba for Johannesburg, and Trollip in Nelson Mandela Bay – have been campaigning heavily, highlighting problems in ANC-governed areas and claiming the DA offers cleaner, more efficient governance.

Maimane said the violence that gripped Tshwane last week highlighted the importance of the elections. “ANC factionalism has brought violence and put peoples’ lives in danger. For the ANC, government is about patronage and cronyism. It is about putting Zuma’s pals in high places so that he can be protected and the connected elite can benefit. The DA is the only party that can stop this gravy train and ensure that our people come first again,” he claimed. Maimane lambasted President Jacob Zuma’s silence on the violence.

Speaking to City Press, the DA’s Tshwane candidate Msimanga said while the five deaths, looting and destruction of property were tragic, the events could benefit the DA. “Yes, as a politician, the disorder in the ANC and the internal strife are working to my advantage. People have been saying to me the ANC is undermining them and they’re going to show it (by voting DA). It is a plus for us that branches are not able to organise as they concentrate on internal battles, but it’s a minus for communities because these violent protests are robbing them of infrastructure. And the money spent on repairs could have gone to service delivery.”

The ANC has tried to downplay how the problems in Tshwane could affect its chances of retaining the municipality and its mayoral candidate Thoko Didiza was campaigning in the area over the weekend.

On Sunday, Maimane criticised the ANC’s mayoral candidates, saying the list “presents the predictable: a conglomeration of Zuma’s pals who will focus on benefiting the ANC-connected elite at the expense of the poor.”

The DA said it challenges the ANC candidates to debates as soon as possible. The ANC might welcome the offer as the party is fielding three strong candidates in Nelson Mandela Bay, Tshwane and Johannesburg – Danny Jordaan, Didiza, and Parks Tau.

“These mayoral candidates cannot bring the change that South Africa needs to move forward again. They offer more of the same: more corruption, deteriorating service delivery and increasing joblessness. The only job they care about is that of Jacob Zuma,” said Maimane.

While the DA has had a head start in campaigning, the ANC is ramping up its significant election machinery, with leaders campaigning across the country over the weekend.

“We want each and everyone’s votes, even those who are in other parties. They are in other parties because they want to be leaders. They must continue to vote for the ANC and still be in other parties. When you ask them what is the opposition, they tell us that they are fighting the ANC,” President Zuma was quoted by News24 at an ANC event in Durban on Saturday. “Every vote counts. We are not playing, do you hear me? We are the future of South Africa, we built South Africa. What has transpired is because some are angry and were kicked out of the organisation. It does not matter because we will win.”

The ANC Women’s League, meanwhile, has taken issue with some of the DA’s campaigning messages. It says the party is sending out text messages in bulk criticising Social Development Minister Bathabile Dlamini’s comments that social grant beneficiaries should be able to live on R753 a month.

“It is public knowledge that the DA has never supported the social assistance policy of the ANC which comes in the form of cash transfers,” said the league’s Meokgo Matuba, who also criticised Mashaba’s past questions on the grant system. Some voters fear a DA government would reduce or remove grants, and the party has been pushing to change the perception, claiming a DA government would provide above-inflation increases. “It is clear that the DA in its desperation is trying to gain cheap political points,” said Matuba. DM