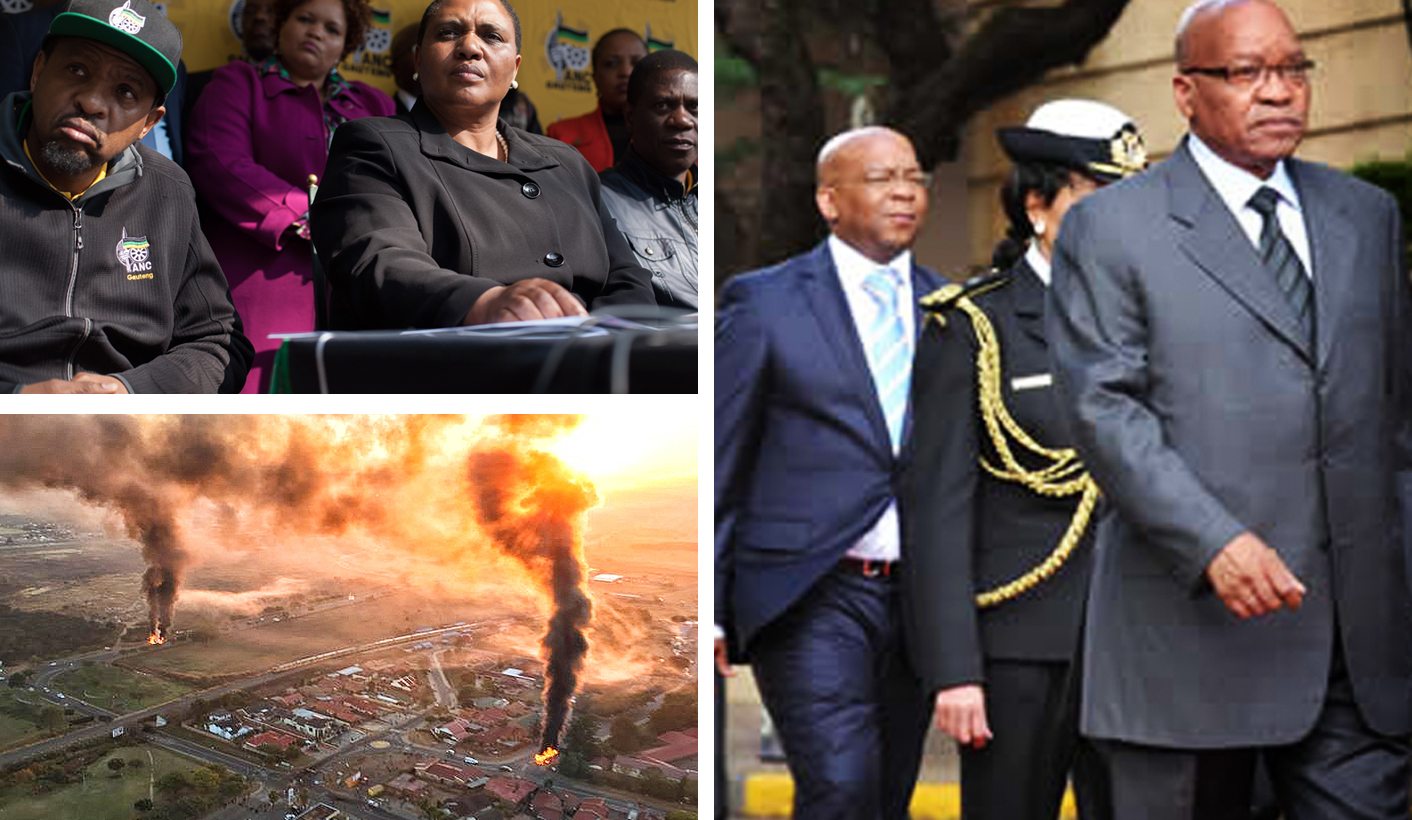 After days of violence and looting in South Africa’s capital city, there are no clear answers as to what caused the chaos and why there was a violent reaction to the announcement of Thoko Didiza as the ANC’s mayoral candidate in Tshwane. There is also no coherent strategy by the ANC to deal with the upheaval, with the matter being left to the police to handle. On Wednesday the ANC was meant to have a meeting with its 107 branches in Tshwane but this did not happen. On Thursday, Gauteng’s 11 ANC mayoral candidates were introduced at a festive media lunch in Johannesburg as the death toll in Tshwane climbed to five. There is clearly more at play than what meets the eye. By RANJENI MUNUSAMY.

The ANC in Gauteng maintains good relations with the media. The provincial leaders are media savvy and are rarely combative with journalists. On Thursday they invited the media to Ruth First House in Saxonwold, which was opened in September 2013 as an “election campaign media lounge”, to introduce their mayoral candidates for Gauteng.

A large media contingent turned up. There was one mayoral candidate of particular interest, Thoko Didiza, whose name had been at the centre of storm this week. She had not spoken publicly since the chaos erupted. The briefing also provided the opportunity to find out what the ANC in Gauteng would be doing to contain the violence that had erupted in Tshwane and bridge the factional divides in that region.

But this was more a social event to “interact with the candidates” rather than a serious media briefing in the wake of horrendous violence, loss of life and damage to property in several areas in Tshwane. There was no sound system for the speakers to be heard or chairs for journalists to sit on to take notes. Under normal circumstances, it would be great to be treated to a spit braai lunch and plied with drinks on a Thursday afternoon. But the circumstances are not ordinary – there is fear and uncertainty in the air about the volatility in the country and what is in store over the next six weeks in the run up to the local government elections.

The ANC stressed that there is no real opposition to Didiza’s candidacy and that the violence erupted due to an ANC factional battle between the Tshwane regional chairperson Kgosientso Ramokgopa and his deputy Mapiti Matsena. The conflict has been long running and complex. The ANC apparently intended to announce its Gauteng mayoral candidates at its rally at FNB Stadium on 4 June but could not do so because agreement could not be reached on the Tshwane candidate. The ANC national executive committee (NEC) also delayed its announcement of the mayoral candidates until late on Saturday night due to protracted arguments over Tshwane. Didiza’s name, as a compromise candidate, was only announced on Monday.

There has been some admission, including from State Security Minister David Mahlobo, that the violence was instigated from within the ANC to force the national leadership to reconsider Didiza’s candidacy. But nobody is saying who these people are. While there have been arrests of 200 people involved in arson and looting, nobody has yet been taken into custody for masterminding the violence. Gauteng provincial secretary Hope Papo said anyone involved in provoking the unrest should be arrested and the province and region would not support these people.

Among the tactics used to send people on the rampage was a false message that those employed through the Extended Public Works Programme in areas around Tshwane would lose their jobs if Ramokgopa was no longer mayor. It is also claimed that taxi bosses exploited the outbreak of violence to deal with the dispute they have been having with Autopax bus services in Mamelodi. It is alleged that they were responsible for the torching of 19 Autopax buses on Monday night. The looting spree, particularly at spaza shops owned by foreign nationals, then followed in the general turmoil.

Ramokgopa and Matsena have washed their hands of the conflict but it is curious that the national and provincial ANC have not put them under pressure to reveal who could have mobilised initial support on their behalf. There have been allegations and media reports of a secret meeting to plot the violence but the ANC has made no effort to get to the bottom of the matter.

Earlier in the week, Gauteng ANC leaders addressed meetings in the trouble spots in an effort to quell the violence. Apart from NEC member and Health Minister Aaron Motsoaledi, national leaders were not visible on the ground. It was announced that the Gauteng ANC would meet their 107 branches in Tshwane on Wednesday but this was cancelled without explanation. There was no mention on Thursday whether this meeting would be rescheduled.

With the matter left hanging, surely there would be concern in the ANC about their ability to campaign in Tshwane and whether they will be able to get all structures to close ranks around Didiza? But this does not appear to be the case. It is unclear why everybody is skirting around the issue and is eager to step back.

The great unknown is the role of national leaders in the factional battle between Ramokgopa and Matsena. There are allegations that some leaders of the “premier league” faction had been in secret talks with the Tshwane leaders but they were eventually left in the lurch. While Matsena was on the original list of three names submitted by his region, Ramokgopa was struggling to get backing.

Gauteng ANC chairperson Paul Mashatile said due to the “sharp divisions” between the two factions, the province decided that neither should be chosen. He said Didiza was on a list of three names they took to the NEC and they had not anticipated that there would be opposition on the ground to her candidacy. Mashatile’s deputy, David Makhura, said there was unanimity between the national and provincial leadership that Didiza should be the candidate and that the Tshwane region was also in agreement.

So where then did the problem arise? The answer has to do with whoever convened a mass gathering of ANC members at the Tshwane Events Centre (formerly the Pretoria Showground) on Sunday. The meeting was apparently called as a feedback session to announce the Tshwane mayoral candidate. It is not clear who called the meeting when the ANC NEC had not yet reached agreement on the matter. Tensions boiled over at the gathering and an ANC member was shot dead. This set the scene for the wave of violence that was to follow this week.

The parallel process of communication with the Tshwane branches is apparently the reason the Gauteng ANC held back on meeting its structures this week. The province wants to play by the book and not participate in “illegitimate” meetings that add to the volatility. The underlying message is that whoever instigated the problem should now sort it out. This would not be the first time the ANC in Gauteng is distancing itself from the mess.

Whoever is on the other end of this power play has not shown themselves. There might be reluctance in the ANC to identify the masterminds of the violence as these people could point fingers to figures higher up in the party.

As matters stand, the political problem in Tshwane has not been settled. The focus has shifted to the criminal elements in this week’s chaos but there is no certainty that whoever caused the initial upheaval will not do so again. There is also no telling whether Didiza will now be given support from all ANC structures in Tshwane. Over the past few days, some ANC members made derogatory sexist and tribal statements against her. It is not known whether they will have a change of heart now.

It is quite apparent that the ANC would have to search its ranks to find a person more capable of being the mayor of the nation’s capital than Didiza. She has proved herself as a proficient leader in previous positions she held in Cabinet and earned respect as House chairperson in Parliament.

Didiza was confident and measured when she addressed the large media contingent on Thursday, saying the unrest had little to do with her nomination.

“Obviously there are many issues that would make people feel uneasy. Those are addressed and we engage with our communities. There are some of the issues that if we were to ask one another, to what extent does looting of a shop relate to an announcement of a mayor. Surely it cannot be,” she said.

Didiza now has a mountain to climb as the face of the ANC’s election campaign in the hotly contested Tshwane metro. She has more to worry about her own party than the stiff opposition the ANC faces from the opposition.

Until the hidden forces in the Tshwane unrest are revealed, there is nobody, including the candidate for mayor, who can rest easy. DM