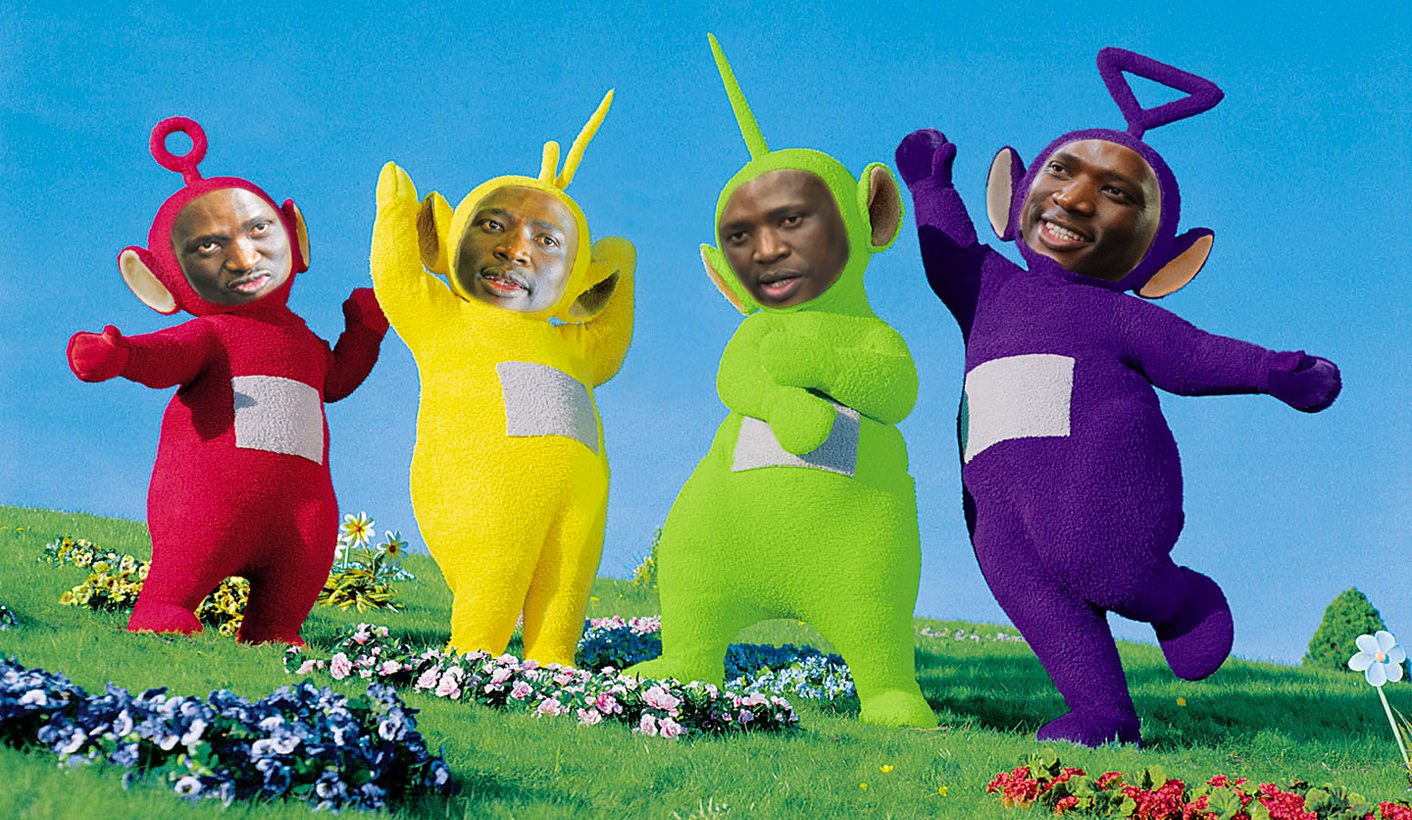 This week, the proverbial chickens came home to roost for the SABC. The public broadcaster faces an Icasa hearing for its decision to stop broadcasting violent protests, the DA threatened to take action for “disproportionate election coverage”, and Right2Know began the week picketing outside the SABC building. Amandla.mobi joined the protesting later in the week and the broadcaster came under fire from various quarters for its coverage – or lack thereof – of the deadly unrest in Tshwane, which by Thursday morning had cost at least five people their lives and ended in about 200 arrests. Was the public broadcaster abashed? Apparently not. By the end of the day, Communications Minister Faith Muthambi had stepped in to rescue COO Hlaudi Motsoeneng – again. By MARELISE VAN DER MERWE.

The SABC opened a week of turmoil with a headline that said it all: “SABC local changes inspire the continent.”

“[COO] Mr [Hlaudi] Motsoeneng has been requested to come and advise other African broadcasters on the implementation of local content,” the story ran.

The beleaguered public broadcaster was heading straight for sunshine station, it seemed. By Thursday, addressing media regarding the increase in local content, Motsoeneng told a critical journalist that she was “spoiling the party”.

Critics were not convinced.

“There is more substance in a baby’s nappy than the ‘arguments’ they [the SABC] present,” Media Monitoring Africa’s director William Bird told Daily Maverick on Thursday. Bird was responding to the SABC’s Acting CEO Jimi Matthews’ affidavit submitted to Icasa on Wednesday night. MMA had until 21:00 on Thursday to submit their own formal response to Icasa ahead of the scheduled hearing.

“To be honest, we are more disappointed than anything else,” Bird added. “On so many issues they are just plain wrong. They are trying to defend the indefensible.”

According to the SABC’s affidavit, the decision not to show footage of violent protests upheld the South African Constitution as well as the Broadcasting Act. To reverse it would be irresponsible; a violation. Among other things, it argued that the editorial policy was protecting journalists, who faced “dangers of being hit by stray bullet blows and/or [being] affected by violent actions of protesters, as has happened before”.

Further, the SABC argued, having journalists taking such footage was unnecessary, as there were already police on the scene capturing it. “(W)here there are members of the South African Police Service in protests, especially violent protests, the police have their own photographers and cameras to cover the situations, as this conduct is criminal in its nature in terms of the law,” Matthews wrote.

Matthews reiterated that the SABC was not prepared to “provide publicity” to actions that were “aimed at destruction and regressive conduct” – an echo of spokesman Kaizer Kyanyago’s earlier explanation for the refusal to read newspaper headlines on air which allegedly gave publicity to other media.

According to Matthews, the SABC’s decision was consistent with Constitutional law, which prohibits incitement to violence. “Consequently, the decision cannot be unlawful, as contended by the complainants,” said Matthews. He added that the Broadcasting Complaints Commission prohibited the airing of gratuitous violence – that which did not play an integral role in the development of the plot, character or theme of the material.

Most specifically, he added, the complainants sought a declaratory order, which would force the SABC to reverse its decision. In Matthews’ view, the Complaints and Compliance Committee did not have the authority to do this, merely to investigate and make recommendations. (Ed: This analysis may sound familiar to some South Africans.)

The former has been debated extensively in the last week alone, with representations of Tshwane coming under the spotlight. Critics such as Chris Moerdyk argued that the avoidance of violent footage had no positive impact on the levels of protest.

The latter is a little harder to ascertain. Although the SABC has claimed to have done its own research on the matter, there is precious little access to this data. One study, particularly on the subject of the role of news media in potentially inciting violence, found that both the presence of media and the screening of footage were equally “as likely to deter as to incite violence”. Earlier research has typically argued that exposure to violence in media can exacerbate aggression levels, particularly in adolescence; a mitigating factor, however, is whether the violence is perceived to be realistic or fictitious, and whether the behaviour is perceived to be sanctioned or not. At least one study also found that there is a certain degree of consistency among journalists regarding how much violence it is acceptable to depict. Journalists, in other words, appeared to be fairly self-regulating.

What may work to the SABC’s advantage is that at least one study found that violent news footage can be upsetting to children. This does not necessarily mean that it should be faced with a blanket ban any more than age-restricted films should be faced with a blanket ban, but if the SABC is determined to follow through with its argument for child protection, it may be able to make a case for parental guidance or restricted time slots.

Then there is the other key question. Will petitioning and pressure by lobby groups have any sway? Motsoeneng has already publicly challenged critics to report him to the Broadcasting Complaints Commission of South Africa (BCCSA) and appears unlikely to oblige Right2Know and other lobby groups’ suggestion that he step down. On the contrary, Communications Minister Faith Muthambi has taken steps to appeal a High Court ruling that upheld that Motsoeneng’s appointment was irrational. Via the Supreme Court of Appeal, no less.

Dr Musawenkosi Ndlovu, Senior Lecturer in media studies at the Centre for Film and Media Studies, UCT, agrees that for the moment the SABC is likely to stick to its guns. “The SABC’s argument so far, and which it is most likely to stick to for long, is that they are to continue to cover protests, but not the aspect where protesters burn public property,” he told Daily Maverick. “They are to argue that they are trying to be socially responsible. The SABC works from assumption that protesters’ burning of property is fuelled by the presence of cameras and that it that this is copied by others in other parts of the country. This is not entirely correct.”

For the moment, Motsoeneng appears to feel secure, says Ndlovu, unless the Icasa hearing has a very unfavourable outcome for the SABC.

“The SABC is less likely to change direction and listen to Right2Know (and other activists’) demands. The only process that can remove the SABC COO is a legal one, and if he falls out of favour with certain power political factions. NGOs are less likely to have an effect on his removal, let alone the fact that the COO is loved by others more today because of the 90% local music decision.”

Dr Sandra Pitcher, Media & Cultural Studies specialist at the University of KwaZulu-Natal, told Daily Maverick she did not anticipate a general change in direction from the SABC, but rather that citizen journalism and social media would play a pivotal role in information sharing in the months leading up to the local government elections.

“Unfortunately, there seems to be very little emphasis on bringing the public broadcaster to account based on how Parliament and the government have dealt with the SABC in recent months,” she said. “And I foresee more criticism coming from print media and independent journalists, especially in the run-up to elections. More importantly, though, I think that social media will have a pivotal part to play in keeping ordinary citizens informed, because as less is reported by the SABC, it is likely that more South Africans will be uploading and sharing their own images and videos of election events, rallies, protests and various other elements which they feel are not being covered adequately by the mainstream media.

“We already saw students set the agenda last year in relation to #FeesMustFall, so it’s possible to argue that similar movements could result from the SABC ignoring South Africa’s many social grievances as citizens find other avenues to be heard.”

The complaint lodged by Media Monitoring Africa with Icasa, meanwhile, awaits resolution, not least because – as previously pointed out by William Bird – the SABC’s editorial policy remains murky. Bird ascribed the change in editorial policy to “a man who cuts off his arm to take away attention from the snake that is biting his leg”, saying:

“Instead of us being able to work on issues of quality, building skills to report and understand community protests, we now have to devote resources to combating a self-created problem.”

The SABC, however, is standing firm, and the Icasa findings will be crucial for its critics. In all likelihood, though, the hearing is just one step on a very long road ahead. DM

Photo: This is where we beg for forgiveness, this time specifically: Tinky-Winky, Dipsy, Laa Laa and Po.