Tshwane sees respite as questions of accountability set in 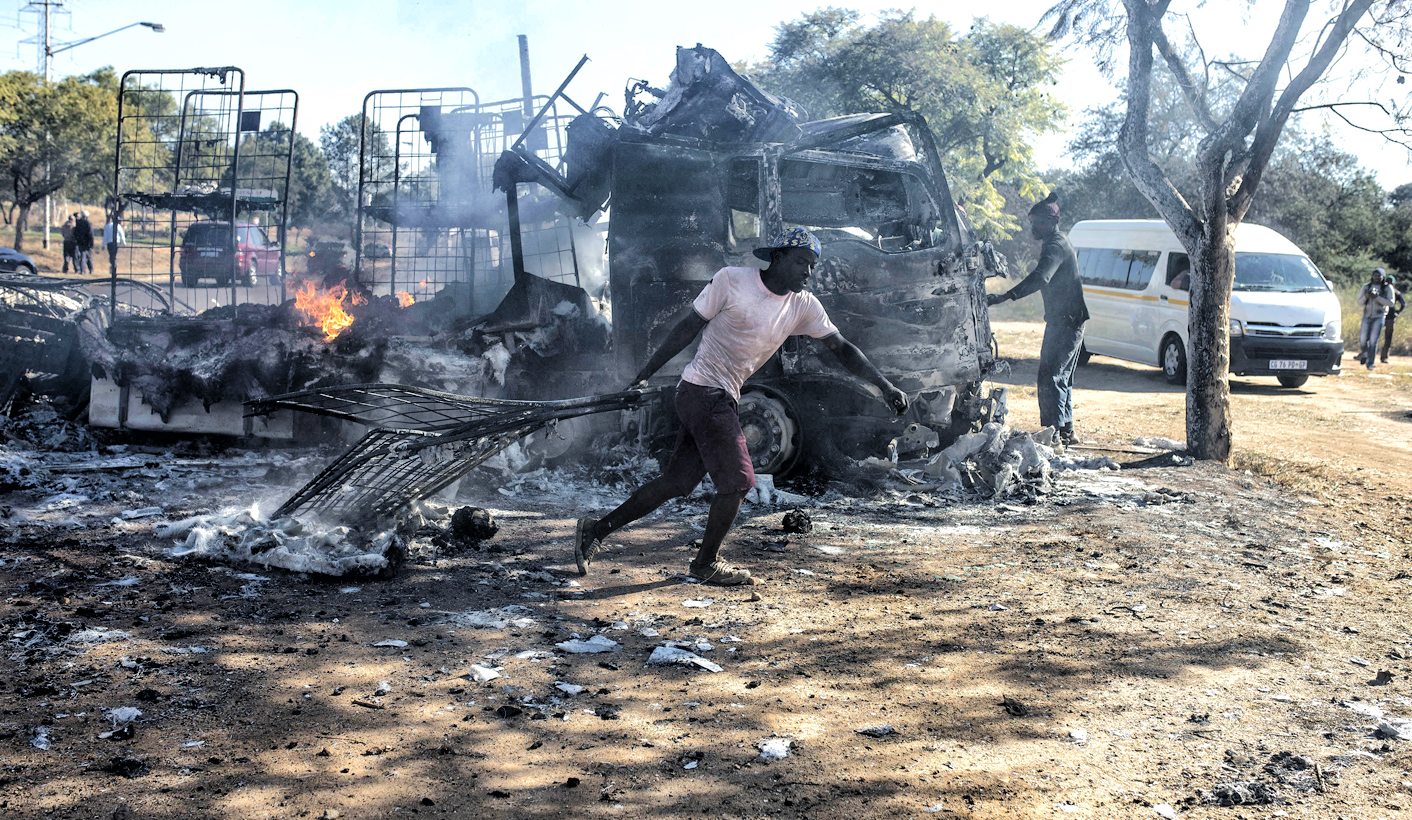 Photo: The remains of a burnt-out truck in the streets of Atteridgeville after residents responded angrily to Thoko Didiza as the ANC's Tshwane mayoral candidate in 2016. Photo: DAILY MAVERICK

Three people have been killed and at least 54 arrested in Tshwane after unrest resulting from the ANC’s appointment of Thoko Didiza as its mayoral candidate. As the ANC scrambles to end the violence, there are growing calls to hold the responsible to account and worries about increasing political violence ahead of the local government elections. By GREG NICOLSON.

Investigations continue into the circumstances surrounding the deaths of two people shot in Mamelodi on Tuesday night – and Gauteng SAPS spokeswoman Colonel Noxolo Kweza said she was unable at this stage to say who was responsible.

While unrest in Tshwane continued into its fourth day on Wednesday, calm was restored to most areas. The violence started after the ANC announced Thoko Didiza would be its mayoral candidate in the region, rather than incumbent mayor Kgosientso Ramokgopa or one of the candidates suggested by the ANC’s regional committee.

Police have made 54 arrests across Atteridgeville, Hercules, Mabopane, Soshanguve and Mamelodi with charges including public violence, theft and possession of stolen property. A government update on the protests noted, “While stability is gradually returning to some of the previously volatile areas, government has noted that the sporadic violent protests and incidents of looting continue in parts of Tshwane such as Mabopane and Soshanguve. Government assures the public that law enforcement agencies are responding and monitoring these developments, and peace and calm will return to the city.”

The statement said government would work tirelessly with police until peace is restored and urged the public not to spread further panic. The prevalence of looting, it said, showed “some of the protest actions are motivated by pure criminality”. Most of the affected areas on Wednesday remained calm, although there were reports of looting in Mabopane and Ga-Rankuwa.

State Security Minister David Mahlobo on Wednesday admitted some disgruntled ANC members were involved in instigating the protests, which he said was then overtaken by criminals. A report in Pretoria News has claimed a senior ANC official and Tshwane branch leaders met on Monday to plan “to turn the city into a battlefield if ‘Sputla’ – mayor Kgosientso Ramokgopa – was not back in for another term”. The violence started immediately after the meeting, said the report.

To restore calm, the ANC Gauteng leaders have visited Atteridgeville, Hammanskraal and Mamelodi but denied reports they postponed a scheduled meeting with Tshwane branch leaders on Wednesday. Meeting with branch leaders is seen as a crucial step in ensuring peace. “There are naughty people talking about branches being postponed,” said the provincial ANC spokesperson Nkenke Kekana on Wednesday. There are 107 branches in the region but only 20 affected, he added. “We are visiting those branches, all those places, the trouble spots, we are going there.” Kekana said the remaining unrest is due to crime rather than politics.

ANC provincial and regional leaders have been in communities calling for calm, but DA mayoral candidate Solly Msimanga called on Didiza and President Jacob Zuma to address the issue. “If Thoko Didiza wants to retain any semblance of leadership, she must come out of hiding and address the Tshwane ANC violence immediately. President Zuma must also step up and take responsibility for the violence he has caused,” he said.

The ANC Women’s League has joined other party leaders in supporting Didiza.

“If anyone is capable of leading Tshwane, it is Cde Thoko Didiza who served with President Mandela in his Cabinet,” said the ANCWL’s Meokgo Matuba. The league condemned sexist slurs made towards Didiza. While critics like Msimanga and protesters have called Didiza an imposed outsider, supporters say she has spent years living in Tshwane and participating in the region at branch level.

Didiza wasn’t nominated by the Tshwane regional executive for the post, but the ANC has repeatedly pointed towards resolution 57 on deployment of cadres from its Polokwane conference where it was agreed provincial leadership has the final say on mayoral posts.

Cosatu meanwhile has called for an investigation into whether the violence had been sponsored by leaders of the movement and tenderpreneurs, and for the arrest of those behind the attacks.

“The movement needs to cleanse itself of reactionaries, opportunists, flatterers, patrons, factionalists and hangers-on, who are infiltrating and tearing the movement apart,” said Cosatu spokesperson Sizwe Pamla. “This narrow focus on internal factional battles by the movement and the never-ending scandals, political violence and killings risk not only weakening the movement but killing it and its political capacity to lead society.”

On Friday, Cosatu Gauteng will brief the media on its views on the election candidate process in Tshwane, from branch committee meetings to the ANC leaderships intervention.

The Independent Electoral Commission (IEC) on Wednesday expressed concern at the rising levels of violence and intimidation marring politics ahead of the elections. Politically-motivated murders, assaults and intimidation have been reported recently in Gauteng, North West, KwaZulu-Natal and Mpumalanga.

“Violence, intimidation, destruction of property and intolerance have no place in a country with a Constitution based on respect for human rights, the rule of law and democracy. That some of these acts are being carried out under the guise of ‘defending democratic processes’ is all the more shameful and incongruent with our democracy,” said the IEC in a statement.

The Centre for the Study of Violence and Reconciliation’s executive director Nomfundo Mogapi said violent protest has been mostly related to service delivery issues, but in Tshwane it relates to election processes and it’s impacting on the legitimacy of choosing leaders.

“The recent violence is not unexpected. Communities were trying to have their voices heard ahead of the decisions taken this weekend. Instead of preparedness from the leadership and security sector, we have seen an escalation of violence. Once again, it is the most vulnerable who are worse impacted upon: poor communities, bus commuters, foreign shopkeepers, among others. This violence is an indication that people are frustrated by their exclusion from political processes,” she said.

Mogapi said Tshwane points to a failure of leadership to anticipate community concerns and the response focusing on criminal and political opportunists shifts away from the legitimate concerns of society’s marginalised.

“This simply encourages and entrenches the ability of opportunists to mobilise the masses. We need to change the currency of engagement and go beyond the violent manifestations of people’s frustration and anger to addressing the root causes beyond them,” she said. DM

Photo: The remains of a burnt out truck in the streets of Atteridgeville after residents angry with the naming of Thoko Didiza as the ANC’s Tshwane mayoral candidate protested overnight, Pretoria, South Africa, 21 June 2016. EPA/IHSAAN HAFFEJEE.