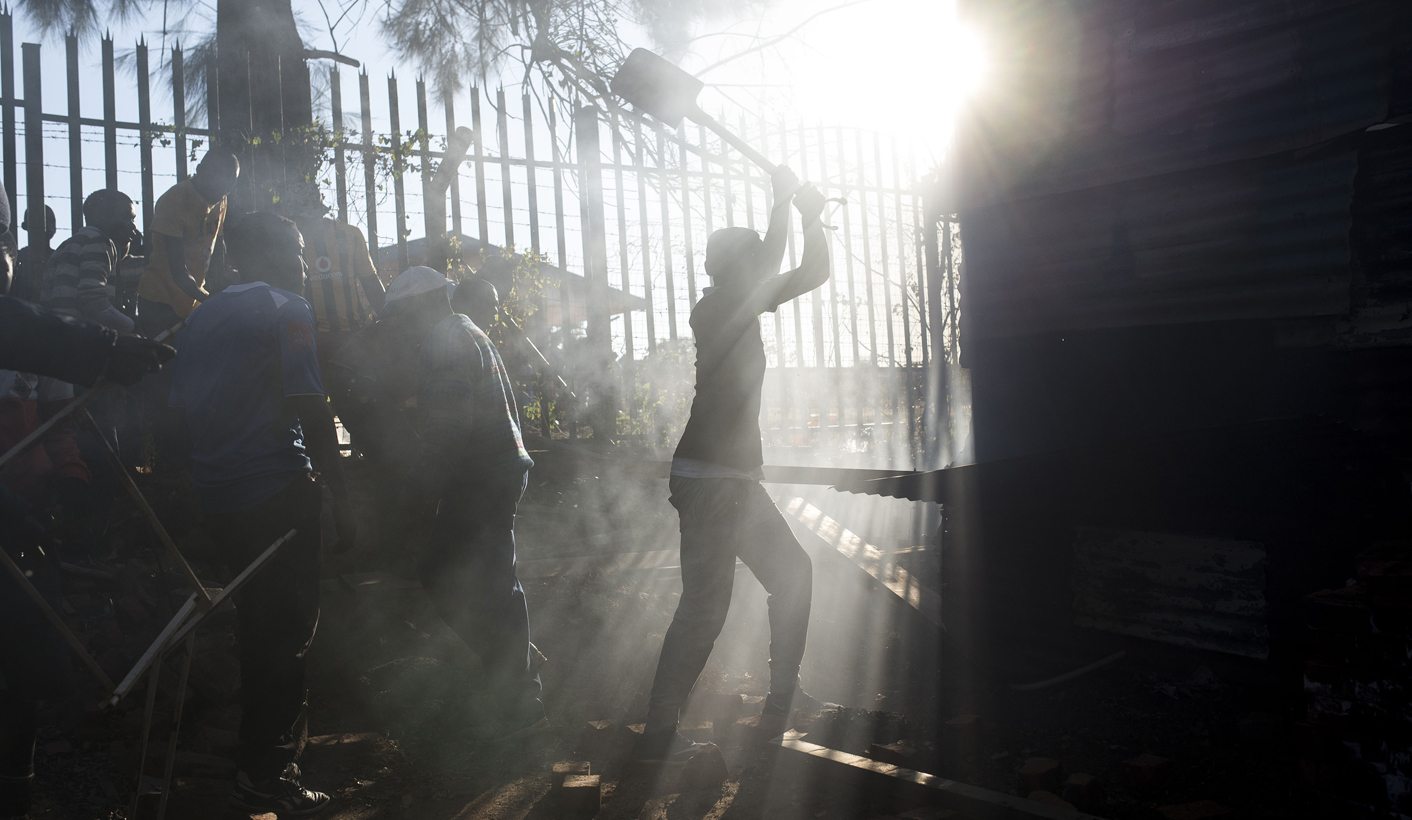 Security ministers on Tuesday were at pains to divorce the ANC, and factional conflicts over Tshwane’s mayoral candidate, from the chaos in South Africa’s administrative capital, Pretoria. Defence Minister Nosiviwe Mapisa-Nqakula maintained that “anything that has to do with the ANC can be directed to Luthuli House, here we sit as ministers”. And while State Security Minister David Mahlobo insinuated “certain other political parties” were fanning protests, without providing evidence, it was left to Gauteng Premier David Makhura to express concern that workers had been stranded at home, pupils left out of class and citizens unable to access municipal services after the city shuttered its offices. By MARIANNE MERTEN.

“It doesn’t matter whether it started in the ANC or not. When the laws of our land are contravened there should be stern action… It doesn’t matter what party is responsible. If we have disruption of normal economic activity, schooling… the responsibility of government is to act firmly. And that’s what we are doing,” Gauteng Premier David Makhura said at Tuesday’s media briefing, while condemning threats against councillors.

And Makhura apologised, unreservedly. “I would like to apologise to people who woke up (Tuesday) morning and found they could not go to work,” he said. The premier added his voice to Tshwane Mayor Kgosientso “Sputla” Ramokgopa’s apology to Pretoria residents who went to municipal offices for services, but found those closed.

Makhura spoke little; he was sitting alongside his political seniors and government bosses, who chose to take a hardline law-and-order approach. Mapisa-Nqakula condemned the chaos as “undemocratic and highly unprecedented”, and something the law enforcement agencies would deal with. “Those who make themselves guilty of such acts (for example, damage to property and infrastructure, incitement to violence, infringing on others’ rights like free movement) will face the full might of the law,” she said.

Asked whether the South African National Defence Force (SANDF) would be deployed, she did not exclude that possibility, but emphasised it would be a last resort. “The SANDF is the last line of defence (for the security of South Africa). You can’t start by deploying the SANDF. For now we have police who are deployed.”

And that’s when it slipped out: that Pretoria was the centre of violent protests proved embarrassing. “This is a capital city. This is Pretoria. This is the capital city of the Republic of South Africa. There is no way the law enforcement agencies allow the chaos to continue,” Mapisa-Nqakula said. “Here is a capital city. We are not going to allow hooligans, anarchists and gangsters to take over… Not that we don’t care about other cities.”

The ANC councillor candidate list processes for the 3 August local government elections has been marred by protests countrywide, attacks and a number of killings. Much of this has happened in places where this could be, if not be ignored, then at least downplayed. That was not an option in Pretoria, the seat of the Presidency at the Union Buildings and the head offices of all government departments as well as institutions like the South African Reserve Bank.

Since Monday evening the ANC has insisted it was not its members behind the Tshwane protests, and that just because someone wore a party T-shirt did not necessarily mean the person was an ANC member. ANC head of campaigns and Water and Sanitation Minister Nomvula Mokonyane told eNCA the situation had “allowed agent provocateurs to seize the opportunity…”

Mapisa-Nqakula said the government reiterated that violence was not the answer. “Our democracy offers many avenues for people or communities to address any grievances (like public hearings and izimbizos)… Those who ultimately decide to exercise their right to protest are advised to do so in a peaceful and orderly manner… Communities and individuals who are unhappy can express their dissatisfaction through a number of constructive platforms”.

However, this attitude ignores the fact that the reason for the protests was not a community issue such as slow service delivery, but an internal ANC process – and unhappiness about the announcement of Thoko Didiza, one of Parliament’s three house chairpersons, as Tshwane’s ANC mayoral candidate, a day after other ANC would-be-mayors were revealed.

Effectively, what has happened in Tshwane is a political situation where factional tensions, left unresolved for years, now have gone horribly awry. And government is left to resolve this by deploying the tools of state such as bringing in extra visible policing and prioritising prosecutions of protest-related cases.

Neither Mapisa-Nqakula nor Mahlobo saw it as such. The defence minister, who leads Cabinet’s security ministerial cluster, maintained their job was to ensure South Africans were safe and could “sleep comfortably”, and they were not there to address “any issues of ANC matters”.

Mahlobo resorted to classic smoke-and-mirror diversion tactics. “Certain other political parties jumped into the situation to try cause panic… We are keeping an eye on the communications that are aimed to cause havoc,” he said, without naming names, or providing evidence. “We know the people who are involved, but we will not have our investigation in public.”

After all, in the world of spooks, be they defence, crime or state security intelligence, such things are regarded as tradecraft, and not shared. Neither are the numbers of extra police brought out to patrol Tshwane and its townships, or the exact details of the “some arrests” and “about 20 cases” the ministers announced were being investigated.

Instead the ministers called for some positivity. “Our responsibility is to project South Africa as a prosperous country,” said the defence minister as Mahlobo called for patriotism: “If the media finds information that seeks to destroy our country, our heritage, our hard-fought-for democracy, should you make it a scoop? Or should you act as a citizen and a patriot…” DM