Op-Ed: From Soweto to Marikana – police action and inaction then and now 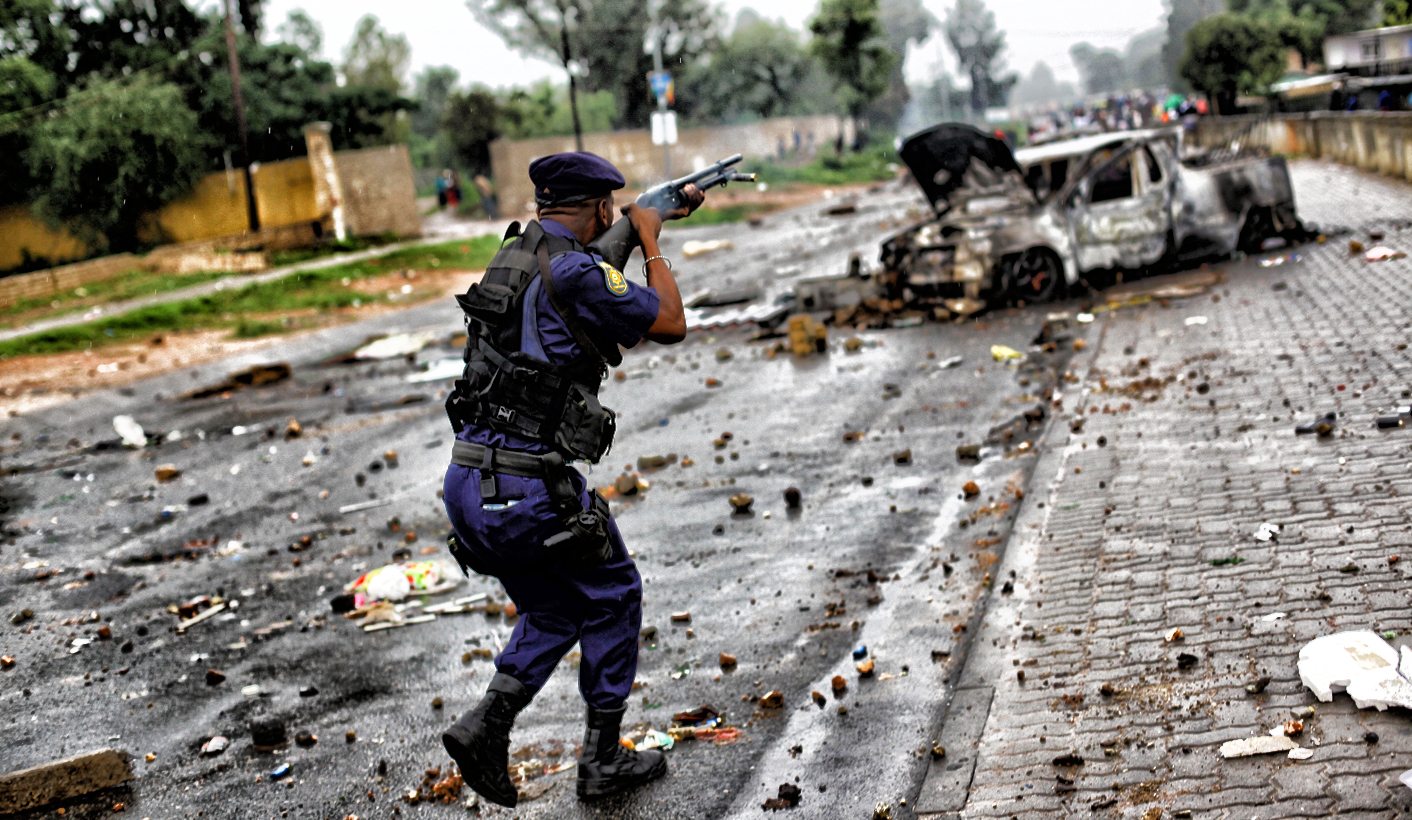 Forty years ago on 16 June 1976, thousands of school children in Soweto, Johannesburg, braved the Highveld cold to protest against the apartheid government’s decision that they be educated in a strange tongue: Afrikaans. Out on the street the students were confronted by the South African Police force (SAP). Tear gas was followed by gunfire. Young bodies fell; cameras clicked. The apartheid system was shaken irrevocably. By ANDREW FAULL.

June days in South Africa can be dark, cold and short. The sun rises late and sets early. Highland frosts feel their way through blades of blemished veld; mists mask roads ahead and behind. The month brings with it the year’s mid-point and shortest day; a chance to reflect on what has been, and what may lie ahead.

Five days before the equinox South Africa celebrates Youth Day. Forty years ago on 16 June 1976, thousands of school children in Soweto, Johannesburg, braved the Highveld cold to protest against the apartheid government’s decision that they be educated in a strange tongue: Afrikaans. Out on the street the students were confronted by the South African Police force (SAP). Tear gas was followed by gunfire. Young bodies fell; cameras clicked. The apartheid system was shaken irrevocably.

Youth Day takes its name from the energy and courage of those young students. But had the police not responded as they did, 16 June might simply be another winter’s day. Police work is practical and symbolic. Through interactions with police, the state communicates with its public. In 1976, police actions embodied the unjust, indefensible and violent state attitude towards black citizens.

It exposed, in ways not seen since the Sharpeville massacre on March 21, 1960, the violence through which apartheid was upheld. South Africans remember June 16, 1976 because youth took to the streets, but also because police looked them in the eye and pulled their triggers. The ripples set in motion by the youth of ‘76 had by the mid-80s crippled the economy, led to states of emergency, public “unrest”, and international sanctions against the apartheid regime.

The early ‘90s saw Nelson Mandela freed from prison and liberation movements unbanned. The South African Police repositioned itself as an objective arbiter of political tension while being accused of using undercover agents to stoke ethnic violence, at a time when the country recorded its highest ever murder rate.

In 1995, a year before the Truth and Reconciliation Commission (TRC), the police service merged with the 10 Bantustan police agencies to form a single South African Police Service (SAPS). Civilian ranks replaced military, and mustard-coloured vehicles were painted cloud-white.

Training curricula were revised to embrace human rights, and “community policing” was imported from the wealthy West. Transformation policy saw black members and women rising through the ranks rapidly. All the while, the TRC shone a light on the SAP’s torture farms, as well as on the detention camps of the liberation movements. It exposed habits of torture and murder.

In the run-up to the ‘94 elections, the African National Congress (ANC) believed, perhaps not unexpectedly, that once police were under an elected-ANC’s control, South Africans would accept their authority. They expected that citizens would accept the criminal law as legitimate and cease the daily violence. This violence had evolved as a product of oppression and as a tool of political resistance, security and punishment in preceding decades.

Instead crime and violence spread, sending politicians scrambling. In 1999 then Minister of Safety and Security Steve Tshwete declared that the government would “deal with criminals in the same way a dog deals with a bone”. With this posturing the ANC stripped law-breaking of the historical, socio-economic and political overtones through which it had explained violence under apartheid, framing “criminals” instead as bad people who threatened democracy.

In 2000 South Africans were shown precisely how a police dog “deals with a bone” when video emerged of four white officers and their dogs mauling three Mozambican men. It was a reminder that, like its violent crime, the horrors of apartheid policing were not snuffed out by elections.

In response to public anger over crime, the 2000s saw government increase police budgets at rates above inflation. Police ranks swelled to 200,000 and the rhetoric of police “service” was abandoned in favour of “force”. Military ranks were reintroduced in 2010 amid calls by leaders for police to “kill the [criminal] bastards” and “shoot to kill”. Some officers have been so emboldened that they have filmed and shared their shootings.

Even the 2012 horrors that happened at the Marikana mine, where police shot and killed 34 striking mineworkers, were captured on police cellphones. Scenes from that day have become as iconic as those of a dying Hector Pieterson, photographed in Soweto 40 years ago this week. Has anything changed?

The SAPS is far from a perfect organisation, but it is not dysfunctional. Many SAPS officers face extreme challenges, like policing a claimed average of 40 protests a day.

A further challenge is patrolling informal settlements without lighting or roads where murders can exceed 100 per 100,000 residents (the global average was 6.2 in 2012) and where residents fear attack from neighbours if they speak to detectives.

It is in this context that the job is something to be coveted. But this doesn’t necessarily produce professional, integrity-based policing. Rather, many officers – including the most senior – do what they must to please their managers and present a public image of competence.

For some this means doing the best job they can do, responding to people’s needs compassionately and efficiently. But for others it means abusing sex workers; shooting without fair warning; manipulating crime data; torturing criminal suspects; (allegedly) assaulting vulnerable villagers; even beating a man to death for publicly questioning police authority – when they believe nobody is watching.

It’s an election year in South Africa. The opposition Economic Freedom Fighters’ manifesto claims that “20 years [into democracy], the police still kill people!” It promises the party will protect street vendors from “police harassment” and communities from “intimidation from the police”. That the party believes these promises will win it votes reflects very poorly on the SAPS.

Nevertheless, more South Africans are satisfied with police than not, even though only 49% trust them. Ultimately, South Africans agree that to address crime, government should spend money on socio-economic interventions rather than police. Indeed, what democracy has not yet delivered is an equal country or economy, in the absence of which policing will always likely defend the status quo established by extreme concentrations of power and wealth.

In my many years of working with the SAPS as a volunteer and researcher, most police action I have observed has targeted poor black men. But one needn’t be a researcher or reservist to know this: Andries Tatane, who was killed by police during a service delivery protest, was black and poor, the Marikana workers were black and poor, the residents of Khayelitsha (one of Cape Town’s largest and deadliest townships) are overwhelmingly black and poor.

The tragic irony is that, despite their relatively good salaries, many police officers remain poor. Their income is stretched to support networks of vulnerable kin. So while one group of relatively poor men and women police another, a political and economic elite enjoys the fruits of a violently unjust society.

As such, police signal to the country’s vulnerable young men that the state does not trust them. The signals entrench divisions already established by a landscape in which many young people literally cannot afford the taxi fair to traverse in search of a job in a market which rejects almost half of young job-seekers. All of this happens against the backdrop a welfare system which offers subsidies to almost every category of vulnerable person except for able bodied, unemployed young men.

The South African Police Service is a very different organisation from its apartheid predecessor. And yet, in its actions and inactions, it is at times too easy to see similarities between them. Ultimately, one cannot reform a police service without reforming the context in which it operates. In South Africa, a broken education system continues to trap the poor majority in poverty.

Despite huge changes South Africa remains a country of stark, violence-inducing inequalities and injustices, wounds which police officers cannot heal. Instead, through their work they both shepherd and protect, criminalise and abuse the vulnerabilities and struggles of millions of South Africans still waiting for their winter to end. DM